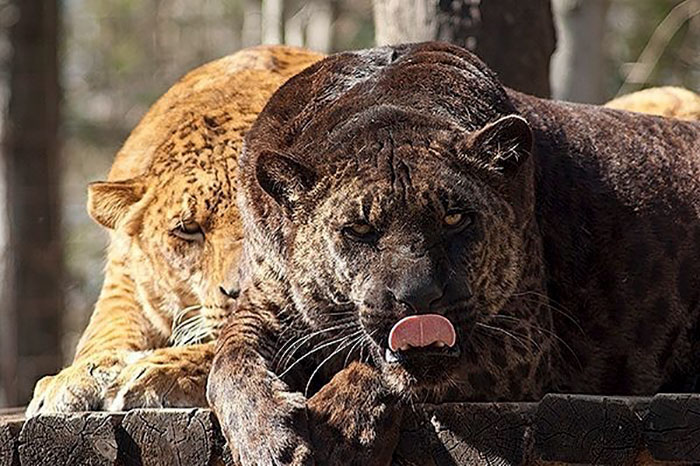 Also sometimes referred to as a jaguon, the jaglion is one of many portmanteaus used to define hybrid species of animals. In this case, it’s the blend of two big cats: a lion and a jaguar. Both belonging to the genus Panthera, their genetics aren’t too far off. It’s not surprising that they’re able to mate, but they are extremely rare.

A jaglion is the offspring of a female lion (lioness) and an male jaguar.

To date, there haven’t been any matings of a male lion and a female jaguar, so that hybrid doesn’t have its own special name.

It’s a luck of the draw, which parent’s genes the kid will get – with any species. When it comes to hybrids, the question of “do they look like mom or dad?” is more compelling. It varies, depending on the hybrid. For jaglions, traits seem to be shared rather equally.
Spots are definitely a dominant gene. Any speckled big cat is sure to pass them on to their offspring. The jaguar father passes his down to his jaglion cub. The cub’s spots won’t be as distinct as its father’s spots – if its father is a traditional jaguar (having a tawny base coat with black spots). If the father is a melanistic jaguar, meaning he’s got a shiny black coat, he could pass this all-black coloring on to his offspring. They would have a black coat with black spots, with lighter patches where the spots are more distinct around their face.

Like its lion mother, a jaglion cub has a distinct tuft of hair at the end of its tail.

Unlike his lion ancestors, though, a male jaglion will not grow a mane.

Photos of jaglions give the impression of gentle giants: big cats who like to roll around in their enclosure’s shavings just like your average housecat. Born in captivity, they’re more likely to be subdued version of lions or jaguars in the wild. Siblings like a good cuddle together.

While stats aren’t given on their actual measurements, it’s pretty easy to guess their size. Lions are ever so slightly bigger (weighing an average of 260 lbs) than jaguars who tend to max out at 200 lbs. It would be logical to assume the jaglion grows to an average of these two weights. Stature is a bit harder to work out, as both species are sexually dimorphic, meaning the male and female are noticeably different sizes. Add that to a hybrid and it’s anyone’s guess how tall they stand.

It wasn’t until the 21st century that this crossbreed became known to the world.

Before this century, there hadn’t been any record of such a cross being made, despite experiments in cross-breeding lions, leopards, and tigers.

The Bear Creek Sanctuary is a charity in Ontario, Canada that specializes in the rehabilitation of wild animals. They take care of a variety of animals – both local and exotic – who are abandoned, abused, or injured. Lola the lion and Diablo the jaguar both went to Bear Creek in need of a haven. The two arrived within one week of each other, so young that they needed to be bottle fed. They grew up together as cubs and, spending all their time together, were housed together. As they grew older, any attempts to separate the two were futile and met with big-cat size tantrums.

When the two reached sexual maturity, the handlers tried to separate these lifelong companions again and faced the same results. Both suffered anxiety and depression and Lola wouldn’t even eat. The handlers gave in and the two were allowed to live together through their adulthood. They were temporarily separated, though, each time Lola went into heat. Despite this precaution, Lola managed to get pregnant. She gave birth to two healthy babies in April 2006.

The cubs were named Jazhara and Tsunami. At first Lola abandoned Jazhara, a weakling cub, and focused her attention only on Tsunami. Jazhara managed to pull through and both cubs have grown into gorgeous and unique jaglions. Jazhara takes after her melanistic father, predominantly black, and Tsunami has his mother’s fairer coat with his father’s spots. As of 2020, fully grown 14-year old Tsunami is looking happy as ever.

Jaglions came to be by pure accident!

When the two cubs came into being, no one expected it – the sanctuary doesn’t breed animals. In fact, they usually take measures to make sure that the animals don’t breed with each other, making this happy circumstance a complete surprise.

There’s not been any news of Jazhara or Tsunami having cubs. Without any evidence from them, we can’t say yes or no. Some people think it’s possible since other big cat hybrids are able to mate successfully. As the Bear Creek Sanctuary doesn’t breed their protectees, it’s unlikely we’ll learn anything from these two jaglions.

How rare is extremely rare? Right now, there are only two jaglions in the world

The ones living in Canada. There has been no written record of any other crossbreeding between lions and jaguars.

While people like to say nothing’s impossible, the chances of a jaglion being produced in the wild are so infinitesimally small that you definitely shouldn’t hold your breath. The reason why it is virtually impossible for them to exist naturally is because of the native habitats of these two big cats: lions are native to Africa while jaguars are native to Central and South America. The odds of these two crossing paths naturally are not ones we’d bet on.

Lions are one of the most versatile big cats for cross-breeding.

One of their most popular hybrids is the liger, a lion bred with a tiger. They can also be crossed with leopards, creating a leopon or lipard. Jaguars’ hybrids are only bred in captivity. Jaguars are bred with leopards to create a jagulep – also called “lepjag,” “jagopard,” or “leguar,” depending on which parent is from which species. Some accounts claim you can cross a leopard with a tiger, but there isn’t any substantial evidence. It’s possible to add another compound onto the name. If a jaglion mated with a leopard, their three-way mixed species offspring would be called a leoliguar. That rolls off the tongue, but it’s unlikely to roll into existence.

In general, big cat crossbreeding is seen as unnecessarily experimental and done for no benefit. While accidents happen – and are raised and beloved as much as their naughty parents – they aren’t encouraged. As long as the whole family is happy and healthy, we love learning about and seeing photos of these big cat hybrids.