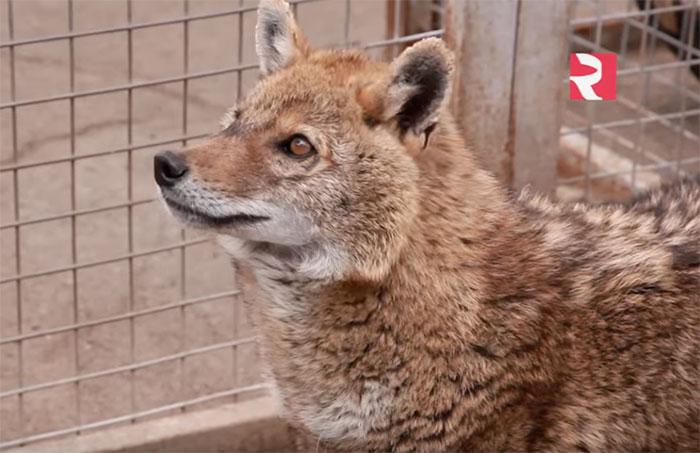 Ligers and mules are old news. They’re also no where near as exciting – one is the mix of two wild species, the other is the mix of two domestic species. Jackal-dog hybrids mix both wild and domesticated species. This mix of backgrounds produces cubs that grow into a beautiful blend of both parents.

1. A jackal-dog hybrid is exactly what it sounds like: the offspring produced by a jackal mating with a dog.

This can go either way – female jackal and male dog or female dog and male jackal. The offspring is genetically 50% of each parent’s species and 100% canine.

The hybrid takes on traits from both its jackal and dog parents. The color of their coat is dependant upon the dog the jackal mated with. Golden jackals are typically gold-colored, hence their name. When mixed with a dog, the hybrid offspring could be as dark as black which is clearly not a trait passed on by the jackal. The length of their coat also differs. Some have long, thick hair like jackals; others have shorter and thinner hair like the dog breed of one of their parents. The hyrbid’s size seems to be the same as jackals. Since no crossbreedings have been done with particularly large or small dogs (which would be unlikely they would mate anyway, given the size disparity), it’s hard to be sure if this could change.

The shape of their ears could differ. Jackals tend to have short, triangular ears. Depending on the dog breed it mated with, its ears can be considerably longer, even with rounded tips.

Finally, this hybridization can effect their feet. Many dog breeds have a dewclaw – a toenail inside their front leg – which jackals do not have. Some jackal-dog hybrid have one, some do not. The hybrid’s toe pads could also differ. Dogs’ toe pads are all distinctly separate while jackals’ two middle toe pads conjoin under its middle fingers.

2. The first record of this hybrid was written in the 18th century

bAn amateur naturalist who bought hybrid puppies from a Dutch East India Company’s ship that allegedly adopted a jackal which then mated with a spaniel. The naturalist, John Hunter, apparently succeeded in mating the mature female jackal-spaniel hybrid with a terrier and she gave birth to five pups. The following century also had written records of jackal-dog hybrids including one made by Charles Darwin. In the 1980s Germans attempted to breed poodles with jackals but weren’t successful, the results being prone to genetic diseases and sterility. None of these breeding programs gave any reason for carrying out their work.

3. The Russians were intentionally breeding jackal-dog hybrids starting in the early 1970s

Claiming that the resulting offspring was a superior sniffer dog. Breeders mix huskies with the wild canine species. Just adding ¼ jackal into the breeding pool meant that the dogs were able to identify each individual person’s scent. Meanwhile husky blood is able to withstand the taiga – or at least temperatures below 40°.

This pairing was made because jackals themselves can’t handle living in the frigid climates of Russia, being far more used to living just above the equator. Plus, domestic dogs are losing their touch. They’re not getting lazy, but as generations go on they begin to lose their natural instincts, decreasing the power of their sense of smell. Mixing the two solves this issue and provides the Russians with elite sniffer dogs, great for security and a career in law enforcement.

4. Both dogs and jackals fall under the genus of Canis.

This means that they are as closely related as horses and zebras or as lions and tigers. In fact, golden jackals are more closely related to dogs as a species than they are to two other species of jackal.

5. In 2015, the first publication of genuine scientific researched confirmed the cross of golden jackals and domestic dogs in Croatia.

The specimens had a distinct mix of traits from each of their parents’ species. These jackal-dog hybrids came to be completely naturally. They weren’t pets. The study also found, based on the statistics compiled, that it was most common for wild female jackals to mate with domesticated male dogs.

They spread across the north of Africa, the south of Asia, and the southeast of Europe (essentially linking the first two locations into a wide swath). Anywhere these wild canines can be found, there’s the chance that they can naturally crossbreed with dogs.

The jackal-dogs studied in Croatia proved (through genetic testing) that the first hybrid specimen, a female, was indeed the mother of the second hybrid specimen, a male. You can’t beat that data. It undeniably proves that the jackal-dog hybrid is indeed capable of reproduction. The third specimen they studied further enforced this fact based on its own DNA.

The one the Russians worked to create by mixing huskies and jackals. They have the stature and traits common in huskies, with some jackal elements thrown in. They looks similar to huskies but with thin legs and long, bushy tails typical for jackals. The most important trait they inherit from their two different parents is their sense of smell. Used as highly effective detectors, they’ve got a sense of smell keener than any breed of dog. Aeroflot, a major Russian airline, owns between 20 and 40 Sulimov. They use them to sniff out bomb threats and even distinguish 12 different types. These seem to be primarily working dogs, being used for their supreme sniffers, rather than making a boom in the breeding market as pets.

8. The technical term for a jackal-dog hybrid is “canid hybrid.”

This is because the two species stem from the same genus tree. Interbreeding is not limited to these two, though. Almost any species within the genus Canis can breed with another species. This includes wolves, coyotes, and dingoes.

These wild species can mate with each other or pretty much any breed of domestic dog.

This gives us creatures like the coywolf who isn’t shy, but a mix of a coyote and wolf. Intentional crossbreeding of Canis members by humans can be tricky. There’s a lot of hesitation in doing so as the wild species have innate habits that may not be conducive to domestication. A lot of states regulate the owning of hybrid animals and treat the owning of one the same as owning a wild animal, rather than a pet. Another reason it’s discouraged is because of the effect intentional crossbreeding can have on native populations.

Concern is raised with wild hybridization. The more frequent mixing of two species could further the extinction of one or it could permanently alter the genetic make-up of a purebred species based on human-dominated landscape. It’s not yet proven if this jackal-dog crossbreeding is a new phenomenon or an old one that had not yet been recorded. Either way, it begs the question of whether wild hybridization is on the rise and if so, why?