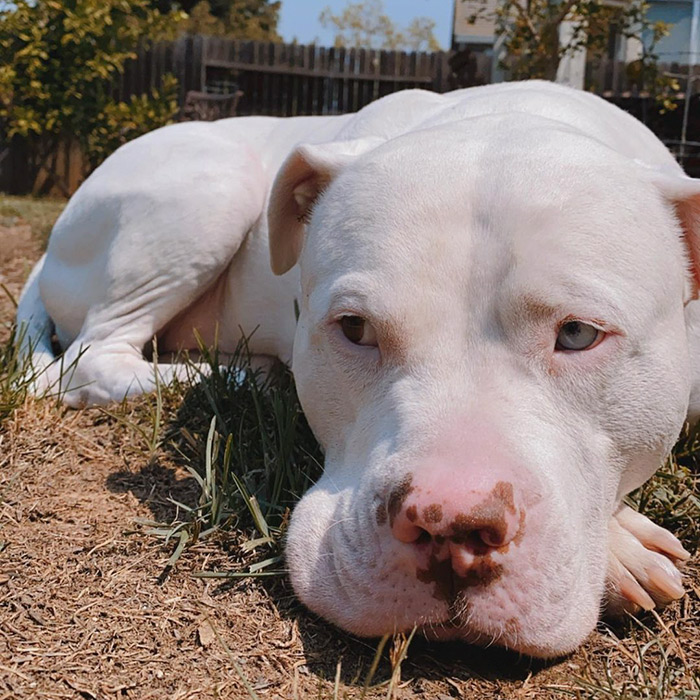 There’s something about rarity that draws humans in. Something about wanting what you can’t have. In the canine realm, some of the rarest dogs fetch the most interest. Have you ever seen a white pit bull? Most commonly known to be brown, blue, or black, pit bulls can actually come in a lesser known variant: uninterrupted, pure white. But is there more to white pit bulls than just the color?

If you haven’t seen it in a dog before, we’re sure you’ve seen other albino animals. Tell-tale white skin or hair and shocking red eyes. Well only one of these characteristics exists in albino dogs: white fur.

Not with spots or splashes of other colors across their backs, either. We’re talking pure white.

Though they’re albino, their eyes don’t look like they’re fresh out a vampire film unlike rats and bats.

(Related: Brindle Pit Bulls – 15 Things You Should Know Before Adopting Or Buying)

1. The skin around their eyes will be very light pink, though, giving them a washed-out look, but their irises are mostly likely to be light blue.

An albino pit bull’s nose skin is also affected by the genetic mutation. It, too, will be pink rather than black.

The difference looks like a matter of semantics, but it makes sense. One is caused by a lack of something all others in the breed (and animal kingdom, for that matter) are meant to be born with. Melanin.

Melanin is what gives skin and hair (or fur) its color. Albino pit bulls don’t have it, meaning their skin and fur are colorless, appearing white to us.

The other is caused by having a different gene than others in the breed. pit bulls can have many different colors of coats. They may have a strong white coat gene instead of a black coat or brown coat gene. They’re not missing anything, they just have a variation of it.

Albinism is caused by a mutation while white coats are caused by breeding. It’s no luck of the draw, there’s a science to it.

Depending on which coat color genes the parents carry, the puppies of their litter will inherit the colors of the parents’ genes. Dogs can carry more than one color gene. In order to be white, however, there need to be strong white genes in both the parents passed down to their litter. Even then, carrying the white gene doesn’t guarantee it’ll present itself as white. The white gene can mix with others differently, sometimes causing Irish or piebald spotting instead of solid white, further limiting the chances of an all-white pit bull.

While in some cases in the animal kingdom, albinism is chalked up to inbreeding, in the case of dogs it is usually inherited genetically. Albino pit bulls are likely to breed other albino pit bulls.

3. White coats come from a recessive gene in pit bulls.

A very recessive gene. This makes all-white pit bulls extremely rare for their breed. Usually, another color’s gene dominates over the lesser white gene. Even rarer than white? Albino pit bulls. The two are often confused with one another – sometimes by accident, sometimes with a sinister and lucrative intent.

4. There is a difference between white and albino pit bulls.

As we said, one is a mutation while the other is a gene variation. Mutations aren’t always a bad thing, but in this case they can be harmful to the wellbeing of the pit bull, whereas being white is no different than being black or piebald or brindle. They are very different to each other, even if they look almost the same to us. 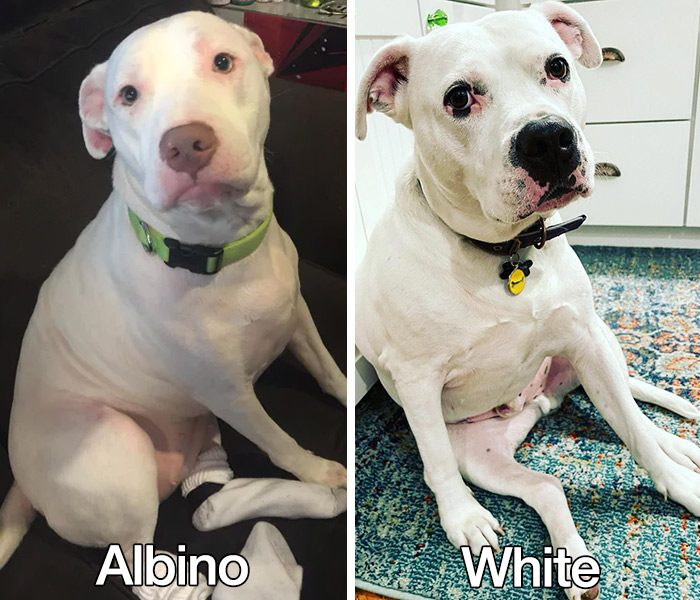 5. Leucistic is neither the white pit bull nor albino one. It’s somewhere in between.

Rather than tell-tale pink and red, they can have black noses and regular eye colors (or darker, non-albino blue). They’re almost half-albinos: they don’t have any melanin in their fur, but other features like their skin can have slight pigmentation. Hence the darker eyes and noses. The only way to truly determine if a pit bull is white, leucistic, or albino is through genetic testing. There is no other way to guarantee which is which. Your eyes will fool you.

6. The differences between albino and white pit bulls remain physical.

7. Not all mutations are bad, but in this case the lack of melanin has adverse effects on an albino pit bull’s health.

The lack of melanin in their body increases their susceptibility to health problems. Albino dogs are prone to hearing and vision issues. They could be born blind AND or deaf, or develop these problems as they grow. Another issue that may be obvious is their sensitivity to sun exposure. This puts them at a high risk of skin cancer, let alone more mundane (though still serious) health problems like sunburn. Being albino often warrants a pit bull to be more of an inside dog for the sake of its health. Owning an albino pit bull requires special care and attention.

8. White pit bulls are susceptible to all the same health problems to which any other colored pit bull is susceptible.

However, their lighter coloring does still make them ever so slightly more sensitive to the sun. Not nearly as sensitive as albinos, caution should still be taken when outside with your white pit bull. It’s best to limit their direct exposure so they don’t get sunburnt. Fear not, doggy sunscreen does exist!

Each case is different, depending on whether or not they were born with certain health problems and the type of upbringing they have. Requiring lots of care and attention, albino pit bulls will have much shorter lifespans if not treated properly. Some may not live long because the mutation has predisposed them to short and sickly lives. 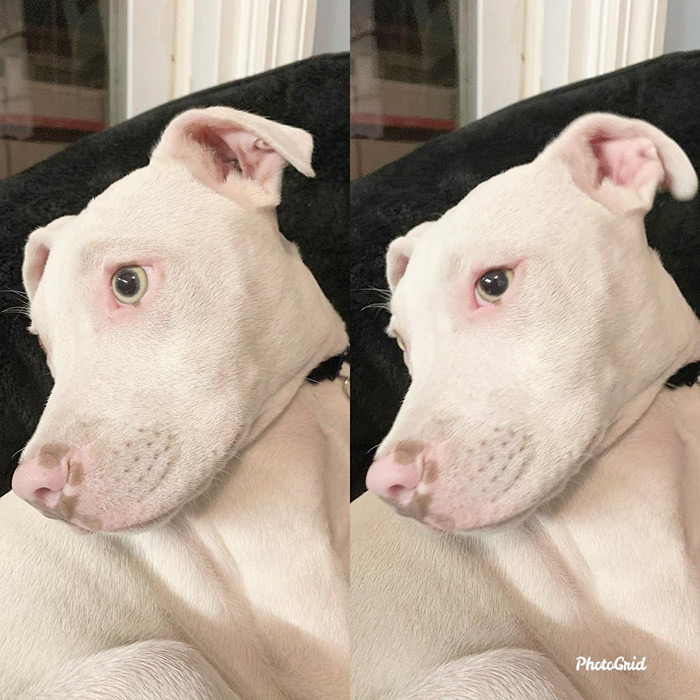 10. If you adopt or rescue an albino pit bull, be prepared to spend mor effort on caring for them.

While like all pit bulls their grooming needs are thankfully low, their fur and skin is more sensitive. Every time you go out for a walk they will be subject to more intense effects of the sun than a normal dog. You will need to protect them, especially their eyes, ears, and noses, from the sun. Remember that, just like with us humans, cloudy days do not mean no UV rays. You should always be on your guard to keep your dog from burning up.

You will want to monitor your dog’s hearing and vision as it can develop problems throughout its life. It’s not a death sentence for a pit bull to go blind or deaf but it will definitely add an extra burden to your care for the dog. That’s why we caution would-be pit bull owners about the type of commitment an albino pit bull requires.

12. An albino pit bull’s temperament and eating habits are no different from regular pit bulls.

Giving them love, care, and attention – as well as some tasty treats! – will hopefully provide them with as full a life as any other pup.

13. Some people may try to take advantage of naïve adopters and sell off an albino pit bull as a white pit bull.

Because white pit bulls are rare, they cost more. Selling off an albino as a white pit bull will earn irresponsible breeders (usually puppy mills) good money on a dog that isn’t worth the price. Remember, albinos are prone to health problems and can have shorter lifespans. This would be a bad investment for the adopter as well as a humane infraction on the poor dog – we understand not everyone’s up to the task for caring for an albino.

Not realizing you’ve adopted one can lead to problems down the line. The first break in ethics is a breeder lying about its adoptee.

The second ethical conundrum is if you discover someone selling albino pit bulls.

While that’s not wrong – every puppy deserves a loving home – it would be troublesome if said breeder made a habit of breeding these disadvantaged dogs. You would have to hope that they are breeding responsibly and that the birth of an albino pit bull was an accident, not a ploy to pass it off as a rare white pit bull. 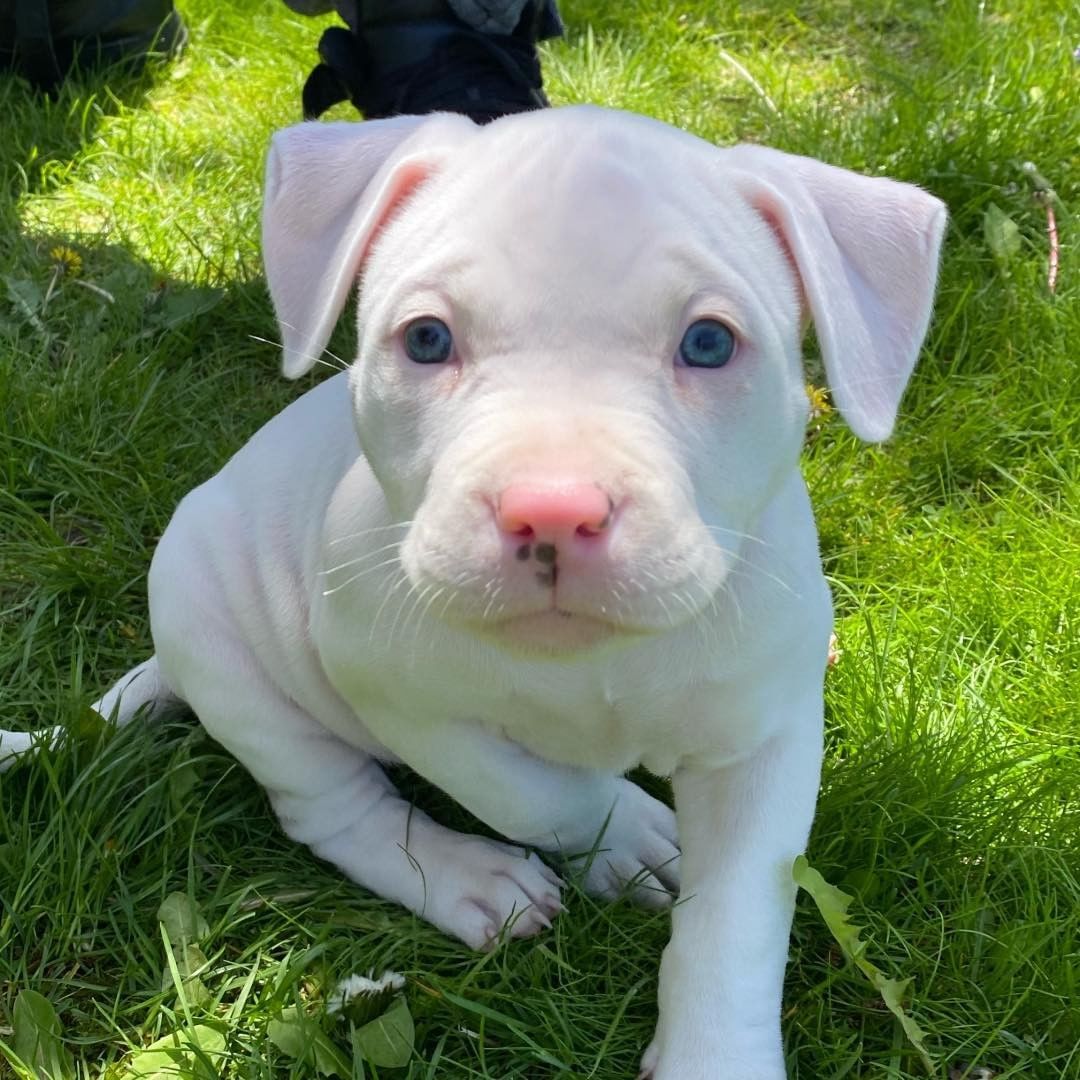 14. We wouldn’t dissuade someone from going out looking to adopt an albino pit bull.

If you’re determined to give the dog its best life and cater to its every specific need, then we’re here to cheer for you.

There are many pit bull rescue agencies that work hard to find disadvantaged dogs new homes. If you’re the right match for an albino, great!

We would not encourage going out to adopt one because they look cool. In that case, please do your research on adopting a white pit bull.

15. Responsible breeders keep detailed health records of the parents of a litter and their genetic heritage.

They will be able to provide you with proof that your pit bull is a true white pit bull and has been bred with care.

There are some things in this world that will shock and amaze us. White pit bulls are truly beautiful pups. So are albino and leucistic ones. What we find most beautiful is finding a new best friend for the family and giving it the best life it could ask for. Being an informed adopter is key in making sure this is possible.