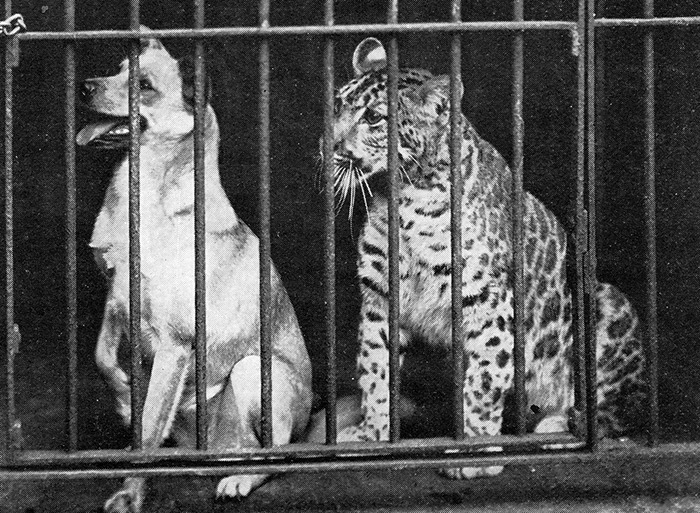 Some people have a hard time telling the difference between a leopard and a jaguar, a puma and a panther.

What makes it even more confusing is the fact that these big cats can be cross-bred, creating a whole new world of fancy felines. One such example is the pumapard.

A portmanteau is two words are brought together to mean one thing.

In this case, a pumapard is a puma and leopard – and not just brought together in a cage.

Genetically brought together. A pumapard is born from a puma and a leopard. While some cross-bred felines are more specific, in the case of the pumapard it doesn’t matter if the mother was the puma or the leopard. Same goes for the father … as long as there’s one of each!

The resulting pumapard is smaller overall than both its parents, meaning is average size is smaller than both a puma and a leopard.

Both species max out around a massive 9’ long, including their tails. While we don’t have exact stats on the pumapard’s full length, we can guess it’s around the 6 to 7’ range, as that’s the little end of the adult puma/leopard spectrum.

Pumapards exhibit a form of dwarfism.

While they still have long bodies, their legs are quite short (though proportionate-looking) and their tails are long like their puma parent’s.

Pumapards have sandy- or tawny-colored coats and have leopard-like marks in chestnut tones.

However, their faces are more like pumas, with their same distinctive face markings. It’s also possible for a pumapard to have a gray body, like a puma, and brown rosettes patterned across it.

The first example of pumapards was recorded in the 1800s, two of which were born in Chicago, but little is known about them.

He’d experimented with cross-breeding various species three times before he got his hands on a pumapard from the British Anderton & Haslamb menagerie.

During this time, the Hamburg Zoo also had a pumapard, suggesting that Germans across the country were interested in hybridization.

A contemporary account written by Henry Scherren stated that the hybrid offspring tended to take after their leopard parent more so than their puma parent.

Hagenbeck maintains that the pumapard is a more intermediate blend.

Regardless, these cross-breeds were deemed “dull and uninteresting” at the turn of the century.

Meanwhile, in modern times, the pumapard is considered interesting as it was not thought that the puma and the leopard are genetically similar enough to be able to mate and produce offspring.

History proved this wrong, to the wonder of modern geneticists.

It’s not too surprising to learn that hybridization of these two big cats didn’t continue, though.

A journalist writing for the Boston Globe in 1906 tells us about Wonder and Land, two pumapard offspring who were anything but behaved.

The journalist writes about their bad moods, destructive behavior, and penchant for lashing out. At the time, Wonder and Land were kittens of mere four weeks of age.

Were they selectively bred?

As seen by the history of the pumapard, it was indeed selectively bred.

Without the intervention of human owners, encouraging the amorous relations between two big cats, we wouldn’t have the history of pumapards that we do.

There are many big cat enthusiasts who test the scope of genetics within the feildae family.

As early as 1895, when the first written account of pumapards appeared in a publication called The Field, the writer speculated as to the hybrid’s fertility, or lack thereof.

Though there isn’t loads of proof supporting this theory, it can reasonably argued.

It’s often assumed that certain hybrids are sterile due to their crossed genetic code.

In all records of these big cats, none of the pumapards that had been bred ever went on to reproduce.

There is absolutely no chance of pumapards occurring naturally or being born in the wild.

As we mentioned earlier, scientists didn’t believe it was physically possible for the two to mate.

While experimenting zookeepers proved otherwise, a pumapard is a specimen that takes great effort to achieve.

Is an animal extinct if it was never naturally occurring?

Never having been a native species, it’s hard to say planet Earth is down one animal.

Plus, there have only been a handful of pumapards that were ever born, none of which produced their own offspring.

Can a species be extinct if there was never more than one, unrelated generation?

Are there other puma/leopard hybrids?

Because felines share close ties throughout their family (the scientific classification, of course – not their pride), it is possible to interbreed a lot of different big cats.

One such example doesn’t have a portmanteau and is simply a puma/ocelot hybrid.

Unlike the pumapard, it has long legs and grow to a medium size.

The puma/ocelot hybrid tends to have a sandy base coat of fur with brown marks, reminiscent of its ocelot parent.

Pumas have also been mated with lions and tigers, neither of which hybrids have a cool portmanteau, either.

Both have a small number of references in the 20th century, none of which were particularly detailed or researched.

While cross-breeding species form the same family can be an interesting experiment to diversify the animal kingdom, it can be fruitless or dangerous. Happily, no severe health problems were ever noted for pumapards. There was not, however, much reason to keep breeding them, so no one has for years.

17 Things You Should Know About Mini Schnoodles Before Buying or…