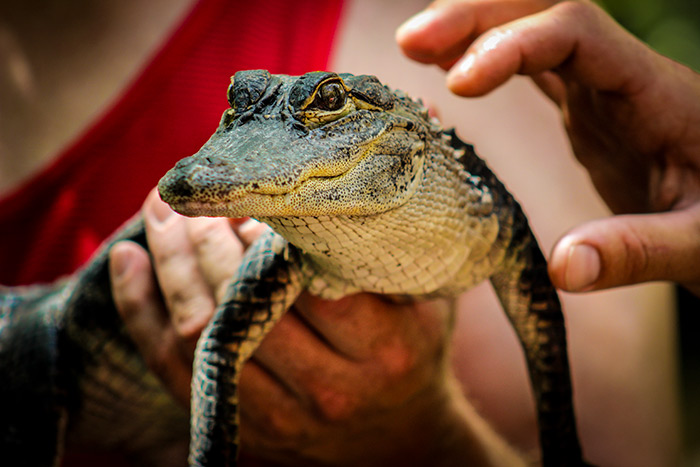 In the modern age you hear of all these celebrities owning exotic pets. Scratch that – Audrey Hepburn had a deer, Dali had an ocelot, and Queen Victoria had Tibetan goats.

For centuries people have kept more than just cats and dogs. In fact, there are unproven rumors of President John Quincy Adams keeping a pet alligator in the East Room’s bathroom in the White house.

It created a bit of a cult pub-quiz fact, even inspiring children’s books about the story, but there is no contemporary proof.

The story was first written 60 years after Adams’ presidency. Whether or not he owned an alligator may remain a mystery.

Today, though, there are people across the U.S. that call these reptiles pets.

Where is it legal to own an alligator as a pet?

It is legal to own an alligator, no questions asked, in Alaska, Massachusetts, Utah, and Virginia – though there may be limits on how many. Regardless, it’s possible to forgo the goldfish in these states and take home your very own swamp monster.

Some state require a permit in order to privately own an alligator. These include:

Michigan Where you need a fishing license in order to take them from the wild. But! the city of Detroit bans private ownership in some parts. 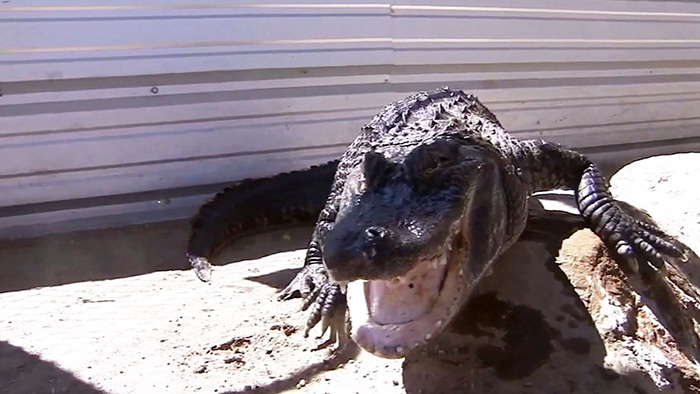 Diet and Nutritional Needs Of An Alligator

In the wild, an alligator’s diet is made up primarily of fish. In captivity, however, it’s generally agreed upon that they should be fed a more diversified diet as a lack thereof can inhibit fertility. (Although that would be more of an issue for zoos and wildlife centers. We don’t imagine there are many private owners in the breeding business – especially since that’s not legal in most states.)

They do eat rather like a garbage disposal. Depending on the size of the alligator, they could consume only one small rodent a week or two smaller animals every 3 to 4 days.

Many owners of multiple reptiles feed alligators leftover mice and rats that their snakes don’t eat.

Other options are freezer-burnt meat and chicken wings or breasts.

It is important to note that alligators prefer fresh food, especially red meat.

They should avoid minced meats or ones too high in fat content, as they can ruin the balance of the water in an alligator’s environment which could lead to certain diseases.

Overall, alligators need a high-protein diet because they metabolize protein the way humans do fat. They need calcium supplements if their food doesn’t have a decent enough level of it.

Alligators will eat more during warmer months (and thus less during the cold) and have a considerable appetite when they are juvenile, but will slow down to only 8-10% of their body weight worth of food per week (hence the small amounts listed above).

The president of the Phoenix Herpetological Society, Russ Johnson, says that he spends $150 per alligator per month on food.

Not as simple or affordable as running to the local shop to pick up some kibble.

Feeding an alligator is only part of the battle of owning a wild animal. Alligators need an enclosure that’s big enough to fit a dry and a wet environment.

It is recommended by the University of Florida’s Institute of Food and Agricultural sciences that any crocodilian enclosure should be twice the size of the animal in question.

For example, if s/he measures 13 feet in length, the enclosure s/he lives in would need to be at least 26 feet long.

Some private owners use kiddie pools, but it’s also not as simple as filling a tub with water.

The water needs to be filtered to keep it from growing all sorts of bad bacteria.

Plus, the pools need to be deep enough for an alligator to be able to float. Buoyancy relieves stress on an alligator’s internal organs, acting as a pain reliever. Prolonged lack of such can cause lasting complications.

They’ll also need heat lamps. Everyone should remember science lessons from elementary school that taught us reptiles are cold-blooded. They need the heat to survive. The wrong temperature could be fatal.

An important tip to keep in mind concerning an alligator’s enclosure is to install gates that open inward to prevent escape attempts (so the alligator can’t push the gate open. They are mighty powerful).

Aside from the suitable living environment, alligators need – believe it or not – toys!

This is as close as it gets to comparing a pet alligator to a pet dog.

But sometimes the winner is simply off-cuts of tubes from the water filtration system for the alligator to carry around like a dog and a stick.

Finally, anyone planning on owning an alligator would need an acceptable travel tote.

It’s unlikely the reptile will travel to grandma’s house, but in case of emergencies or vet trips it’s important to have a safe enclosure to transport the alligator in.

The travel tote is essentially a glorified storage box. Being covered up completely, without a view outside, is the best bet for keeping the alligator calm when travelling to unknown territory. 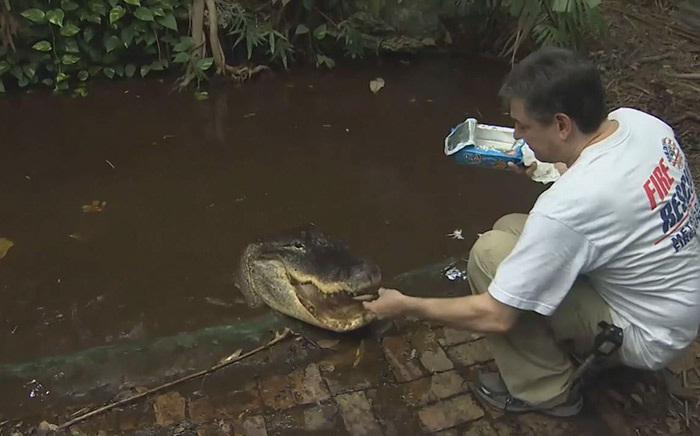 Poor feeding can cause several minor (but detrimental if long-lasting) health problems.

Some effects of bad diets include obesity, stunted growth, and decreased immunity.

Alligators can also have bone disorders and skin diseases if they don’t get enough calcium, hence the necessity for vitamins in some cases.

Alligators can suffer from mouth rot which is easily counteracted by brushing their teeth with a paste made of baking soda and water. Dental problems can arise from bad nutrition, hence the emphasis on feeding gators correctly.

Alligators can also suffer mental health issues. They can have problems with stress from being kept in captivity, in which case a regular intake of vitamins, minerals, and amino acids can soothe this.

Depending on who you talk to, alligators could be cuddle bunnies.

While we would like to stress that, at the end of the day, they’re a wild animal. Bites can happen.

“It’s not the alligator’s fault. The alligator was just being an alligator,” says Russ Johnson to National Geographic.

However, it is unlikely they’re charge about on a rampage. While they can move quickly when they want to, alligator do spend a lot of time sunbathing or chilling in the water.

Some private owners allege that they give hugs when you hold them, but that’s only if you’re brave enough to do so.

Concerns over owning an alligator as a pet? It’d be “doing an injustice to this animal,” says Great Plains Zoo’s director of animal care Matt Eschenbrenner’s.

He stands firm on the idea that alligators should not be kept as pets because of the amount of care and specialized facilities one needs.

Alligators, unfortunately, are not able to be domesticated and thus a great concern lies in an owner’s ability to care properly for the reptile.

Human safety aside (though this is obviously an important and obvious element in owning an alligator) – it’s not good for the gator!

These guys were made for the wild and do best living there. Conservation reserves and zoos are the best captivity an alligator can hope for, but the ideal location is in the wild where it was born.

So You’re Determined To Get An Alligator As A Pet…

There are reptile breeders that sell alligators, but every source out there about privately owning a gator warns against black market dealers and frauds.

Google search where to buy an alligator and sites will come up.

The best way to know a good dealer is through reviews and communication with the business.

If owning an alligator isn’t legal in your state, we’d be very wary about any reptile dealers selling alligators locally.

Just know that many specialists insist that there is no such thing as a pygmy alligator – anticipate that any gator you adopt will grow into a full adult size.

If you’re keen to research prices and sellers, we recommend caution for ultimate reptile lovers – a Google search will come up with a lot of results for where to buy alligator meat.\

How Much Does An Alligator Cost?

Buying a juvenile crocodile averages around $170. Albinos are even on the market, but could cost $20,000+. (Though, if you’ve read our article on albino alligators, you’ll know they’re even more vulnerable creatures.)

Pros And Cons Of Having An Alligator As A Pet

Is Owning An Alligator A Good Idea?

If a situation arises where an alligator needs rescuing, is unable to be returned safely to the wild, and you have unlimited time and money to contribute to the gator’s wellbeing, we suppose it’s possible.

However, unless you’re a specialist in alligator care, it’s unlikely you’ll be able to provide the animal with the best life.

Inside is an unnatural environment for an alligator that will only mimic a comfortable home.

Outside may provide better digs, but you could constantly run the risk of escape without around-the-clock surveillance, or have a negative impact on local wildlife or even a neighbor’s pet who strayed into dangerous territory.

If you’re that much of an enthusiast, we’d advise pursuing training and education in the care of reptiles that could help land you at an accredited wildlife center.

Wild animals are so-named for a reason. We all find beauty in all walks of life, but when it’s wild it’s hard to call your own. Personal ownership of an alligator is risky business – there’s a reason it’s not legal in many states. The care and upkeep of owning one doesn’t seem to outweigh the risks to yourself and the animal. Wild animals belong in their natural environment: the wild. If you do happen to own one, though, we hope you give it the best, most loving home suitable to its reptilian needs.