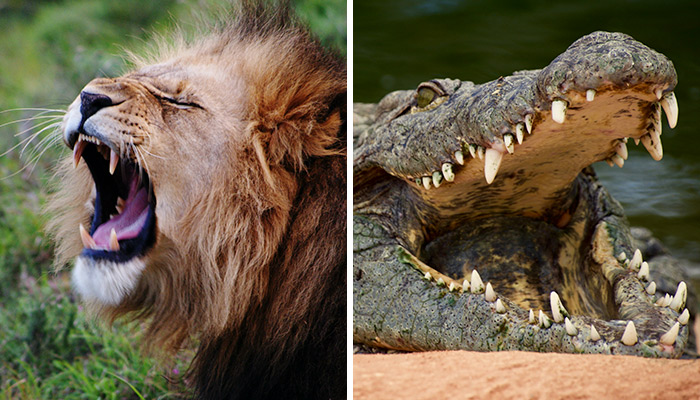 While we’d never actually throw the two of them into an arena, we can’t help but wonder: who would win? King of the jungle vs. saltwater assailant. Lion vs. crocodile.

Lions definitely have size on their side. On all fours, fully-grown lions can stand around four to five feet tall. Imagine if they walked around on their hind legs!

They’re still intimidating close to the ground as they weigh in almost three times more than the average weight of a human.

An animal this hefty is already a force to be reckoned with, but don’t forget that lions are carnivores, making them doubly dangerous.

Anyone who’s had a scratch off a house cat knows the sharp sting of their claws. Lions, their much bigger cousins, have proportionately larger claws and teeth.

They may be called canines, but a lion can wield its fang-like chompers to deadly effect.

The first level of defense for a lion is its almighty roar. Starting out with a tame warning, a male lion’s roar can echo for up to five miles as a way to ward off potential foes.

When this doesn’t work, things get physical. Same way house cats will bat you away when they don’t want to be pet, lions use their paws as defense to push away attackers.

They also have speed. Not nearly as fast as cheetahs, lions can still run up to 35 mph. This makes it quite easy for them to get away from threatening situations.

Though it ties in with their offense strategy, one way a lion ensures its own defense is by hunting in groups.

A lioness rarely goes out alone, moving in pairs or in threes. This way, whichever one plays offense on the hunt is protected by another one or two members of her pride.

Safety in numbers. Although sometimes it’s danger in numbers, and all three end up on the offense against their prey. 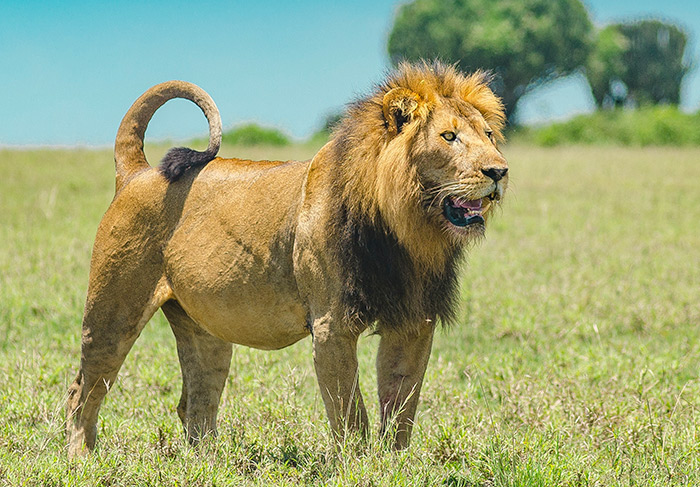 What do lions usually defend themselves from

The biggest threats that lions face are humans. When they’re up against firearms, all the skills in their arsenal won’t be able to beat man’s technology.

Their best hope of defense in this case is to run away.

On the four-legged side of things, lone lions do sometimes need to be wary of hyenas.

The Lion King proved to us all that packs of these wild dogs could be a formidable enemy.

Aside from the occasional injury from elephants and giraffes protecting themselves, hyenas are the only wildlife lions really need to watch out for – and only when they attack in groups.

While lions obviously stand taller than crocodiles, the reptiles have the mammals beat in length and weight.

Crocodiles can grow anywhere from 5 feet to a whopping 23 feet long including their tails.

They can also weight a massive 2,000 lbs, guaranteeing that even the shorter tails can pack a punch when whipped around.

Some researchers say that the crocodile’s thick, water-proof skin is bullet proof against some basic ammunitions. Even if this weren’t true, a crocodile’s scales do offer up more armor-like protection than a lion’s skin.

A crocodile’s best defense is its versatility. This is a gift that comes from having amphibious traits. Crocodiles are able to stay underwater for up to five hours without needing to breathe or risking water in their eyes and lungs. If something on land is threatening it, a crocodile can just slip into the water – and vice versa.

They’re not creatures known to run away from a fight though. Like felines, crocodiles will hiss to warn off potential attackers.

Determine enemies who ignore this warning sound have to face the full weight of a crocodile’s smile.

Its best known attribute is a crocodile’s mouth. Unlike alligators, you can see a croc’s bottom teeth even when their mouth is shut.

Count them all and you’ll be faced with 80 pearly whites compared to a lion’s mere 30. Their formidable strength doesn’t come from their teeth, though. It’s the power of a crocodile’s jaw that can snap bones, even if the reptile is toothless. They use this strength more than relying on their teeth in fights to force their prey underwater and try to incapacitate it by breaking its neck. What better defense than rendering your enemy harmless? 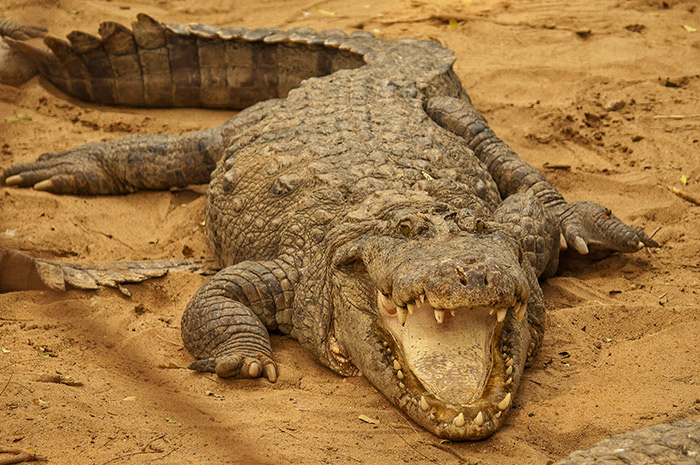 What do crocodiles usually defend themselves from

In the same way that lions suffer occasional attacks from some land mammals, crocodiles can also be victim to other wildlife every now and again. In fact, one of the few members of the animal kingdom that can threaten a crocodile’s well-being is a lion. (But we’ll get into who’d win that one just below.)
Humans also play a sad role in the threat to crocodiles. These reptiles have to defend themselves against poachers. While they are not yet given a conservation status, unchecked crocodile hunting could threaten these reptiles as two-legged predators harvest them.

Crocodiles are an extremely wide-spread animal, living on pretty much every continent on the planet (Antarctica and Northern Europe don’t agree with their warm-weather habits). The Asiatic lion has a very limited stomping ground on the Indian Subcontinent, but there are plenty of African lions living across Sub-Saharan Africa. It’s not just possible for the two to cross paths, it’s known that they do. In Africa, both apex predators are often found very close to each other, sometimes actually coming head-to-head.
Who would win

One comparison to take into consideration is each animal’s leg length.

Lions have so much power in their limbs that they can jump over 30 feet in one go.

Crocodiles can’t jump very far (they’ve been known to jump upwards, to catch bait like meat dangling off a pole, but not forward like a cat’s pounce).

However, lions also have a disproportionately small heart, meaning that they can’t exert themselves for an extended period of time.

Crocodiles have very small legs in comparison and thus can’t reach the same speeds lions can, even if they can go for longer.

Another important comparison is the two predators’ range of attack. Crocodiles are limited. They are only able to successfully attack anything within six feet in front of themselves. As long as humans are tall (or more!), this makes it difficult to defend any part of itself behind its front legs.

Meanwhile, a lion is much more agile and has a greater turning radius, and thus greater attack radius.
Lions Crocs

Though it seems like the crocodile has a lot going for itself, poised to win this one, actual cases from the wild prove that this formidable predator doesn’t have enough of what it takes to win.

Despite the reptile’s long, imposing jaws, it’s proven that lions are able to take down crocodiles. Eye-witness accounts prove lions’ success in doing so. This is on land, however. Crocodiles could potentially have the upper hand in water, but it’s so rare that a lion would enter crocodile-infested waters that it’s hard to say if such a clash would ever occur.

Apex predators are considered to be at the top of the food chain, but the term doesn’t consider predators outside of their food chain. Both lions and crocodiles target certain weaker mammals that graze in the wilds of Africa. Sometimes this brings the two against each other, leaving the lion the victor.