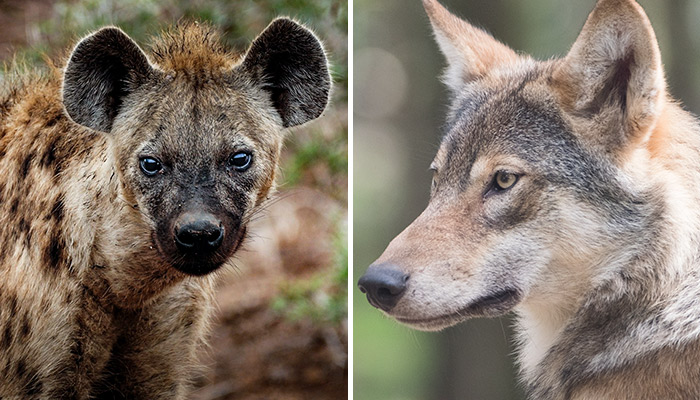 Wolves are world-famous predators revered for their ferocious abilities and pack mentality. Not too different from these cousins of dogs is another pack animal who is often forgotten outside of being a Disney villain.

The hyena is a formidable hunter who is much more common in Africa than you may think. It’s no laughing matter, the amount of power and prowess this carnivore has.

But how does it measure up compared to the wolf? 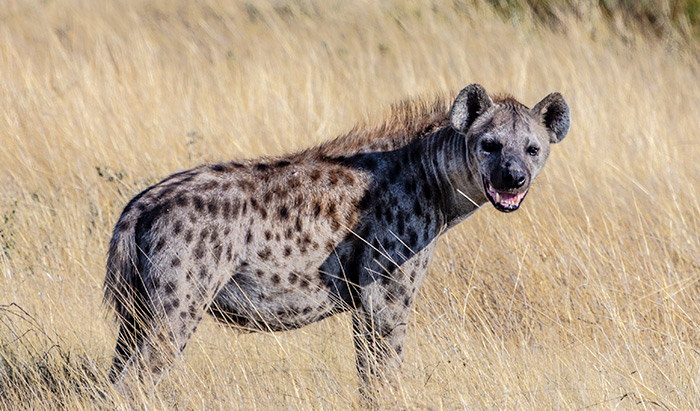 Hyenas are a class of animal unto their own. Though they look like a dog, they are in no way part of the canine family. (In fact, they’re more closely related to cats!)

There are three types of hyena, the largest of which is the spotted hyena.

One of these can average anywhere from two to four feet in length, not including its tail which can add another 10 to 14 inches, and stand half the height of a human on all fours.

Their weight can vary depending on species, averaging around 100 lbs, but some have been recorded weighing in closer to 200 lbs!

While they aren’t completely front-heavy like a bulldog, they do have a similar build: muscular neck and jaw with long front legs and a smaller backside.

Known to take down the mighty wildebeest, hyenas are very fast runners – topping out at 30 mph – with high stamina.

They often resort to tracking migratory prey and are called “tireless.”

They can even swim. Their adaptability on land and in the water is even more fearsome when you consider their bite force. Though they only have as many teeth as humans do, they can bite down at an incredible 1,100 psi that can easily tear through flesh as well as bone.

How do Hyenas hunt?

Hyenas hunt in packs. It’s normal for a large group of dozens of hyenas to go in for one kill. In one example, 35 hyenas were witnessed attacking and eating a zebra and her foal. They’re able to defend themselves by never being forced onto the back foot. 35 on two assures they have the upper hand.

If a solo hyena is caught off guard by a foe, they use their famous laugh to call in back-up. It carries for miles.

A passive way they defend themselves is through scent. Hyenas are territorial and will mark their clan’s territory with what we can only describe as a ring of feces. They use piles of dung to mark the boundaries of their lands and to threaten others that this ground has been claimed already.

When it comes time for physical contact, the hyena has a very strong bite. Thanks to their molars, they’re able to crush through bones which their stomachs can easily digest, leaving them unhindered – a skill practically unique to the hyena.

(Related: Can Hyenas Be Tamed?)

What do Hyenas defend themselves from?

Hyenas are the largest, most common carnivore in Africa. Obviously the lion is more formidable, but there are more hyenas out there.

Sometimes, they do fall prey to lions with whom they compete for food.

A squabble over a carcass, regardless of who caught it first, can easily end in a dead hyena and a sated lion … but not always.

Hyenas have proven just as able to take down their feline foe.

There are some parts of Africa where hyenas are viewed as pests. In the same way raccoons sneak into our garbage, intelligent hyenas raid food stores and attack livestock, causing them to be heavily hunted.

Sometimes they’re also poached for alternative medicine. They’re also painted to be the boogey monster, being blamed for missing children and dug-up graves.

All of this puts them at risk by human hands. 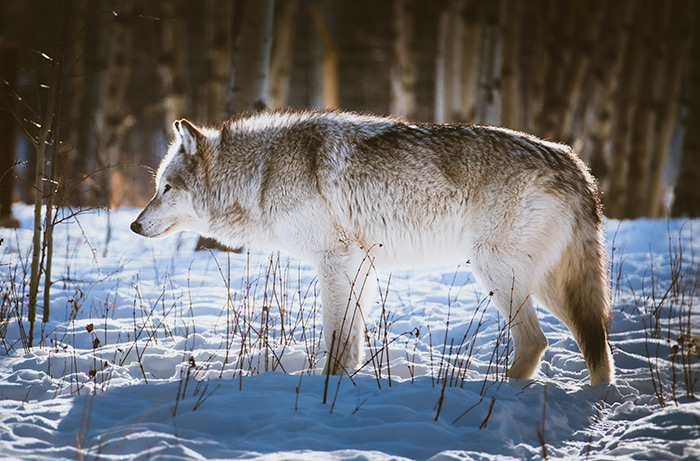 The largest members of the canine family, there are more than 30 species of wolf in the world.

Depending on which species, the largest can grow up to six feet long (including their tail) and stand as tall as a hyena can, sometimes more.

Wolves are more than likely to outweigh them, starting at only 80 lbs but easily weighing up to 160 lbs.

The largest wolf on record weighed a massive 175 lbs. The wolf has 42 teeth which can measure up to 2.5” in length.

These mighty chompers can deliver up to 1,200 psi.

How do Wolves hunt?

On the hunt, wolves tend to aim for animals they can sense are slower or weaker than others.

This tactic prevents them from getting in over their heads and focusing on a target unlikely to put up too fierce of a fight.

They are pack hunters, but in considerably smaller numbers than hyenas. Usually between four and ten adult wolves hunt together, but in some cases the group can grow up to 30 members.

If their numbers don’t scare off a threat, their bodies offer them an advantage. Their large paws act like snowshoes to keep them in control on snow and ice without getting bogged down.

They do not rely on their claws, however, for defense as much as their teeth.

The wolf’s powerful bite can help immobilize a victim for a quick end, before it tries to use their hooves or antlers against the wolf.

What do Wolves defend themselves from?

Wolves are apex predators, meaning that they are the top of their food change.

Occasionally they are threatened by big cats such as mountain lions and by bears, depending on the territory.

The well-known howl of a wolf is sort of a defense mechanism. It announces to other wolves nearby where the howling wolf is and delineates its territory.

While it isn’t meant to scare off an immediate foe, it does warn them where the wolves are, advising them to stay away.

As a pack, they stand a chance against a bear, but would not be likely to take one down solo.

Ironically, like almost all apex predators, humans pose a threat to the wolves’ well-being. Hunters and poachers have been known to shoot them on occasion, but farmers will actively protect their livestock against wolves.

The slow-burning danger to wolves is the non-violent intervention of humans: with our growth comes the decrease in their habitats.

Urban development and climate change negatively effects their livelihood, an offense they can’t defend themselves against.

(Related: Lion vs Wolf: Who Would Win In A Fight?)

Do Hyenas and Wolves interact with each other in real life?

Hyenas call most of Africa home, but they’re also found across the Arabian Peninsula over through India, depending on the species.

Wolves stretch across the northern hemisphere, their habitats also depending on the species of wolf. They manage to cover most of North America and Eurasia, preferring cooler climates because of their thick coats.

It is possible for both to exist in Arabia and the Middle East.

In fact, stories have been recorded in the Middle East of wolves and hyenas competing for food, making this tête-à-tête a very real possibility.

Hyena vs Wolf: Who would win in a fight?

Both hunt in a pack and don’t eat very often, but survive off of less frequent, large kills.

Hyenas and wolves are two animals who share many similar qualities despite seeming worlds apart. Here is where they differ:

It seems that the odds of a hyena having to face off against a great foe like a lion is more likely and more documented than a wolf having to fight a bear.

This suggests that the hyena is more adept at taking on an equal or greater foe. However, these conflicts can usually be fought in a pack. If the two fought each other one-on-one?

If a hyena and a wolf went up against each other alone, we would be unable to logically determine who would win.

Both four-legged carnivores have formidable traits that are comparable.

Wolves seem stronger and faster, but they don’t use the extent of their skills as often as hyenas do.

We think it would be a close call – even if the two fought in equal packs.

We can’t deny a pack of 30 hyenas against a mere six wolves would strongly favor the former, but that would hardly be a fair fight.