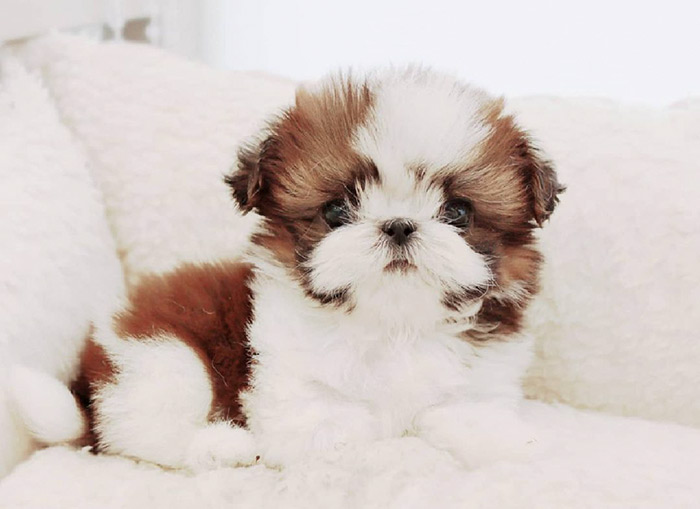 The toy group of dogs is full of pretty pups whose small size seems unbeatable. Breeders have managed to develop even tinier versions of beloved classics. The Teacup Shih Tzu is a prime example of compact cuteness made even smaller.

1. To be considered teacup, the dog weighs less than 5 lbs.

Already a naturally small breed, Teacup Shih Tzus are half the size or less of their regular counterparts. Teacup merely denotes a size difference, no breed difference.

Teacup Shih Tzus can be purebred or they can be mixed. Some breeders will cross them with other breeds to ensure their teacup size, if eligible Shih Tzu mates are not available.

The Shih Tzu’s origin is in China, where its name means “lion dog.” Looking at one, it’s easy to see where the name comes from.

These purebred pooches have long coats which are reminiscent of lions’ manes. Fully grown, their fur runs flush along the ground.

Even for little dogs, Teacup Shih Tzus will still have a lot of hair.

Breeders will mate the runts of a litter, relying on their extremely small stature to produce equally small pups.

As long as the parent pups, the runts, are purebred, the offspring will be, too.

Because teacup breeding relies on the littlest ones or abnormally small dogs born with birth defects, being a purebred Teacup Shih Tzu isn’t necessarily a good thing.

While they don’t strictly outline why on their website, we can assume it’s because a lot of backlash teacup breeders face from accredited veterinarians.

As the AKC is the head of ethical breed standards in America, it’s something to think about.

5. Teacup Shih Tzus come in all the same colors classic Shih Tzus do:

Some can have tri-tone, black mask, or black tips. 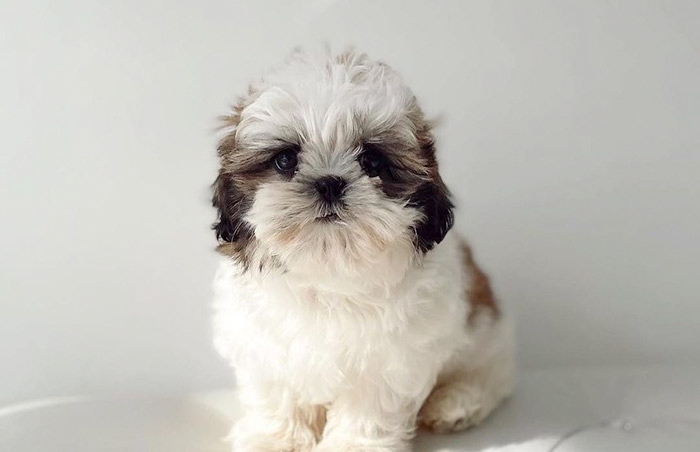 6. Teacup Shih Tzus are rare because of the limited breeding pool.

Because breeders watch gene pools to prevent repetitive inbreeding and mixing of unhealthy genes and need the smallest candidates to continue the Teacup line, they’re arguably the rarest of Shih Tzus.

Breeding a dog for looks, rather than focusing on healthy genes, is bound to have a negative impact on the dog’s future well-being.

While some of these aren’t life threatening, the treatment can be costly.

Liver shunts alone can cost up to $6,000 to treat, but the treatment isn’t always guaranteed to work.

Aside from these big-name issues, Teacup Shih Tzu owners should regularly be on a look-out for their dog’s blood sugar level – being so small makes it important to not miss a meal – as well as getting cold easily (hence little dogs often being dressed in sweaters).

8. The average lifespan of a normal Shih Tzu is between 12 and 16 years.

Evidence suggests that this remains the same for Teacups. 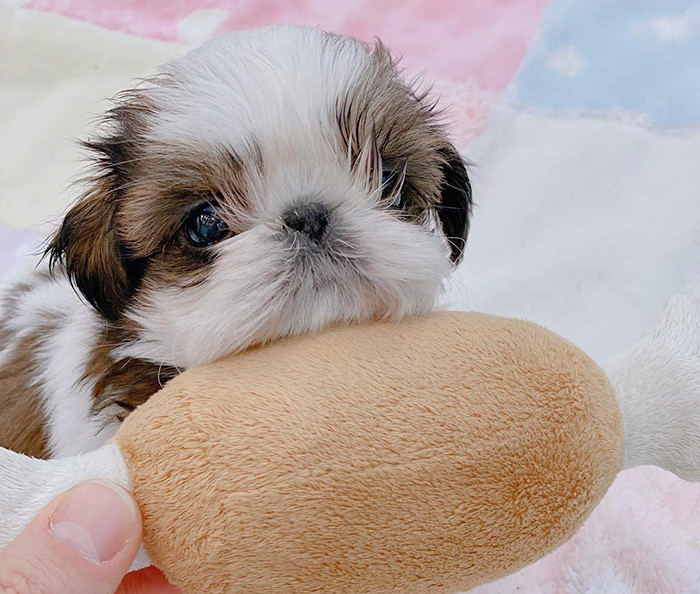 9. Teacup dogs of any breed are going to be more expensive than their regular-sized counterparts.

It also depends on what a breeder considers to be teacup.

There are some who list dogs weighing less than 5 lbs as “micro tiny teacup.”

One breeder prices these miniscule Shih Tzus at $12,000 and up!

10. The reason why Teacup Shih Tzus are expensive is because of their rarity.

Since the mating pool for these little ones is limited and not always guaranteed healthy results, anyone wanting to adopt a Teacup will need to be ready to pay for it.

11. Finding a reputable breeder requires you to research and put in some due dilligence

There’s been so much literature available about puppy mills that they’re a pretty easy scam to notice and avoid.

The best way to reassure yourself about a reputable breeder is research.

Make sure you check out a breeder’s entire website, their social media, and other reviews posted about the company elsewhere.

They are a business, after all, and should have a presence of satisfied customers.

Another key is communication.

Ask the breeder questions, if there is anything that’s still unclear.

Do not hand over any money before you’re ready to.

Many breeders ask for non-refundable deposits, which is normal, but only do so once you’re happy with your choice.

The best way to be sure of this is by seeing your future puppy.

If you’re in contact with a breeder from out-of-state, video chat with them to see the dog in action.

The easiest way to fake a Teacup pup is still shots. A photograph isn’t replacement for seeing your future best friend in action.

At the end of the day, go with your gut.

If something seems off with a breeder you’re in touch with, especially if they don’t want to provide guarantees or proof of health or parentage, then say no.

There are plenty of Shih Tzu breeders in the country, you’ll find another!

There is no doubt about it: Teacup Shihs Tzus are terribly adorable.

These miniature toy dogs are a great companion for people used to small living or who want to take their little one out and about.