Brindle Akitas are perhaps one of the most striking breeds around, but you don’t see too many of them around. Why could that be?

The Akita is a large, noble, powerful dog breed who charms everyone with their looks, but can also be intimidating, especially for first-time owners.

They were originally used for guarding royalty and nobility in Japan centuries ago. The Akita was also used to track and hunt wild boars and black bears.

The Akita is a strong-willed breed that does not back down from challenges.

They can be confrontational with other dogs and usually do not mesh well with cats, but can be great with children if introduced properly.

But, the breed is also highly desirable for many reasons. They are faithful companions that become very attached to the right human and are actually quite affectionate.

Remember the movie Hachi? That Akita sets the standard for the breed: loyal, determined and fearless.

The Akita is a striking dog. They are a fairly burly breed, with a broad head and a large build.

They stand around 24 to 28 inches tall at the shoulder and weigh between 65-115 pounds on average.

Their ears stand upright and their tails curl upward, perhaps their most distinguishing mark.

Their eyes are small, dark and deeply set, almost triangular in shape.

The Akita coat is different in American Akitas and Japanese Akitas, but both feature thick double-coats that thankfully don’t shed too much, but do require maintenance.

Akitas come in a variance of colors, depending on the subtype of breed.

Over time, two different main versions of the breed have been created: the American Akita and the Japanese Akita.

The American Akita is a bit heavier, and can be found in all colors, including red, white, brindle, black, chocolate, multi-colored, etc.

The Japanese Akita is smaller and more fox-like, only found in red, brindle, or white. Black is fairly rare, with red and white being the most common.

Brindle is not the most popular, but is also not the rarest variance.

Brindle is a coat coloring made of predominantly black and brown stripes and markings. It’s a typically dark coat, often tiger-like coat.

A brindle Akita can be white or fawn with brindle markings as well.

White is actually very common as a base color with brindle markings across the back, face and torso. Their mask, the characteristic sign of an Akita, can be brindle or black usually. 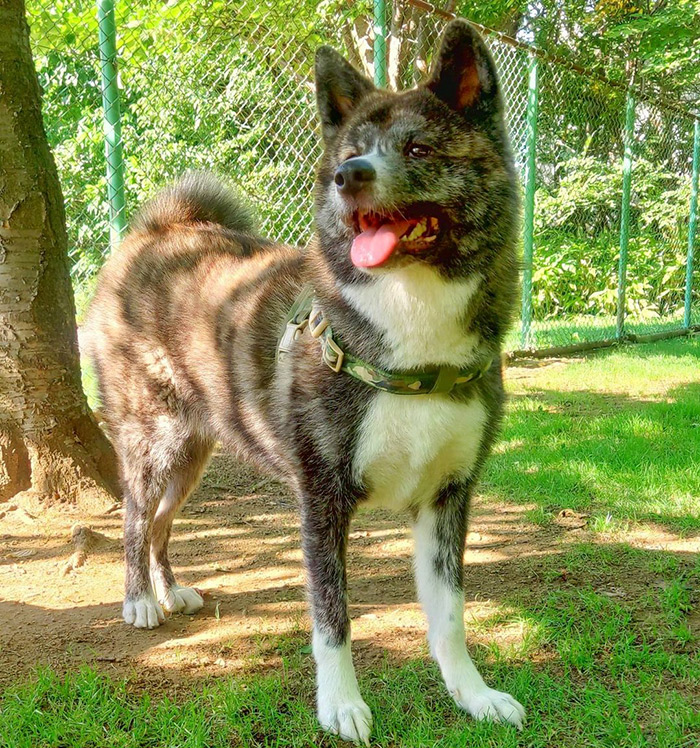 Where does the Brindle Coat Come From?

The brindle coat pattern is caused by a genetic trait, just like all other coat colors and patterns. A dog’s gene series in their DNA determined their color.

To make it simple, there are three possible different gene variations at the DNA where coat color is created.

One is all black, one is a default option from the parents, and the other makes a dog brindle.

Brindle is more dominant than yellow, but is recessive to the black gene.

While Akitas began as mostly white or red, the brindle color most likely naturally occurred.

There was a lot of cross-breeding done with Akitas with German Shepherds, St. Bernards and Mastiffs back in the early 20th century, which could also contribute to the new color variance.

More than likely, the color naturally occurred due to genetics.

Akitas as a whole are not the healthiest dog breed around unfortunately. Most can be avoided with proper care and routine vet visits, but some are simply genetic and can only be cared for, not cured. Some common issues include

There is no proof that brindle Akitas suffer from more health issues than Akitas of any color or coat. There is not much literature or exploration of this subject, but it is unlikely that a color variance that is not a genetic mutation, but rather a trait, would cause extra health issues.

Notice how we said attitude, not temperament? It is because this breed can be a challenge.

Beyond the color, it’s important to understand the Akita breed.

This breed is not for the faint of heart or inexperienced dog owners.

They have regal beginnings and sure act like it. In fact, the Akita is designated as a national treasure in their native country Japan.

Helen Keller is cited as bringing the first Akita to America around 1937 and the breed’s popularity only grew from there.

Akitas are extremely strong-willed, smart, a bit possessive, and very attached to their one person.

They are often intolerant of other animals and have a prey drive, but can thrive with children or other dogs with proper introductions.

The Akita can be a bit territorial of their home and family, which is unsurprising as they were used as guard dogs for hundreds of years.

The Akita is not a quiet dog and will be vocal about their opinions when they want to.

For that reason, they don’t make great apartment dogs and require a moderate amount of exercise and mental stimulation.

They are very sensitive dogs and do not do well alone for the most part.

That all sounds bad, but with the right owner and home, an Akita is a lifelong, loyal companion that loves their family dearly and will do their duty to protect and serve them. Adopting or Buying a Brindle Akita

If you are committed to training and loving a brindle Akita, there are a few routes you can go to welcome one into your house.

The first is to look at shelters, both locally and online.

There are many Akita-specific rescues across the world who only adopt out Akitas, so be sure to check those out.

The cost for a brindle Akita will greatly vary on whether you adopt or purchase from a breeder.

For adoption, you can expect around $250, depending on what part of the world you are in and what type of shelter you adopt from, the age of the dog, etc.

For breeders, the number is much higher and harder to calculate.

Breeders set their own rates based on demand, their location, costs, etc.

They are not the most commonly bred pet, so their prices may be higher. You can expect to spend between $700 and $3000.

Remember this; lower price is not always better. Be sure to find a reputable breeder who screens and tests their studs and mothers for common health issues.

Many eye and hip problems can be screened for and kept out of puppies if genetic testing is done.

Visit your breeder and see the conditions mom, dad, and puppies live in to be sure they are being treated ethically.

Ask for frequent updates, vet records, etc. to ensure your breeder is legitimate and taking care of their dogs welfare and bloodline.

The Akita is not a breed for everyone. But, if you are willing to invest time and effort into a dog, the Akita can be your best friend and a loyal companion.

Brindle Akitas are perhaps the most striking of all Akitas, and have all the great loyalty and love the other breeds’ colors have. Do your research on if an Akita is right for you, then find a brindle Akita in your area to welcome into your family forever.