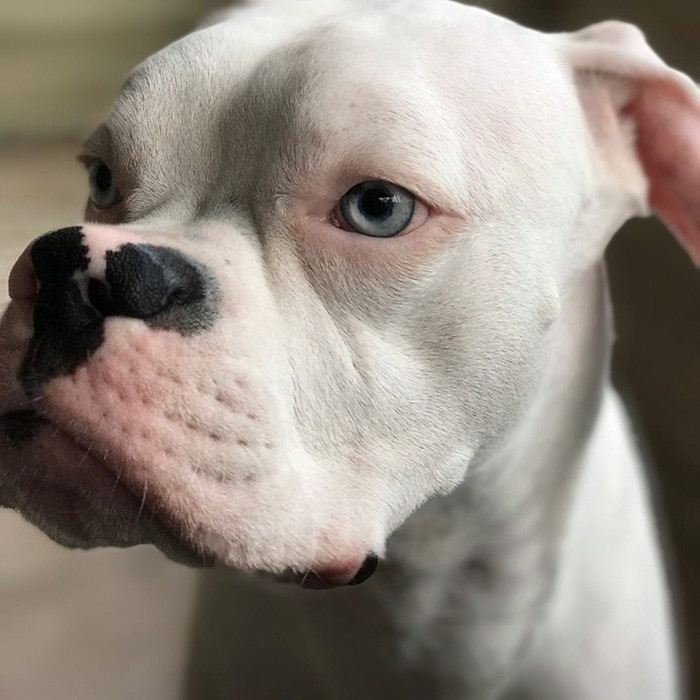 Boxers are one of America’s most popular breeds due to their affectionate and loyal personality.

White Boxers are often confused with albinos simply because the color of their coats is similar.

However, there are a variety of differences that set the two apart. Here is more information to help you determine the difference between an Albino Boxer and a White Boxer.

1. Albino Boxers and White Boxers are NOT the same.

Many people confuse white boxers and albino boxers and mistakenly use the term ‘albino’ interchangeably.

Albinism is a genetic condition in which prevents dogs from producing melanin, the pigment that colors skin, hair and eyes.

White coated dogs produce the color white, while albinos boxers only appear white due to their lack of pigmentation.

Boxers with white coats and dark eyes or noses can sometimes be confused as albino.

2. White Boxers have a spot or marking near their nose while Albino Boxers have no pigmentation or markings of any color on their body.

An excellent way to tell a White Boxer from an Albino Boxer is to look at their eyes. The eyes and the tissue surrounding the eye sockets of albino dogs appear to show a pinkish hue.

Unless an boxer has a pink noses and pink skin around its eyes, it is not albino, just white coated.

Small markings of black, fawn, or brindle are found in various areas of the body on white boxers. 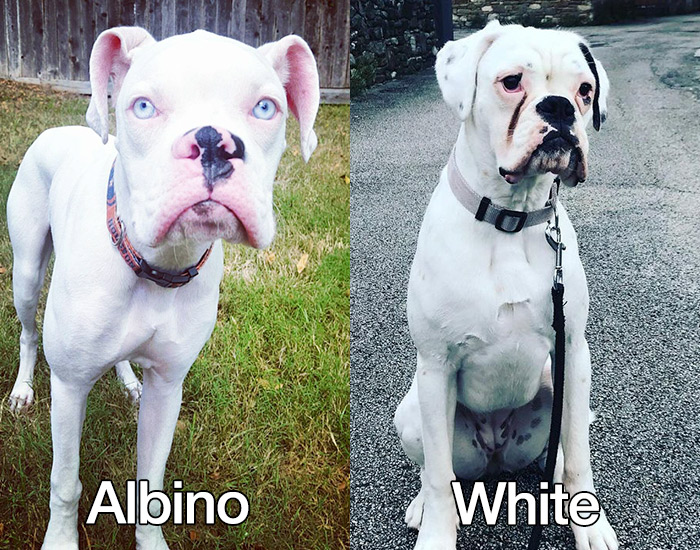 3. Albinism occurs when a dog inherits two copies of a recessive gene which results in no skin pigmentation.

White Boxers on the other hand are born with a recessive gene that creates a white coat but still has pigmentation.

4. Life expectancy is 10 to 12 years for white and albino Boxers as well as any coat color.

Although albino boxers are more prone to certain health coniditons, their lifespan is relatively the same as normal boxers with proper care.

5. Albino Boxers are prone to sunburn and skin cancer.

The lack of melanin and pigmentation in a dog’s skin puts these dogs at higher risk, not only for sunburn, but also for developing skin cancers. Albino boxers should get minimal and carefully managed exposure to direct sunlight.

6. Here are a few tips on how to care for your albino boxer:

7. Other common health issues include the following:

It may come as a suprise to you but, about 20-25% of boxer puppies are born white.

Unfortunately, many breeders euthanize white Boxer puppies because they don’t meet the standards set in place by the American Kennel Club and American Boxer Club.

Since the puppies are euthanized, most people think white Boxers are rare but they are actually common.

Since albinism is caused by two copies of a recessive gene they are considered rare compared to white Boxers.

9. Is it unethical to breed or buy albino Boxers?

Purposely breeding dogs with the intent for them to have genetic albinism is not ethical and any breeder that engages in that practices should be avoided. However, if an albino Boxer is born to a standard Boxer and naturally inherited the lack of pigmentation, that is a different story and you should have no qualms about buying or adopting such a dog. 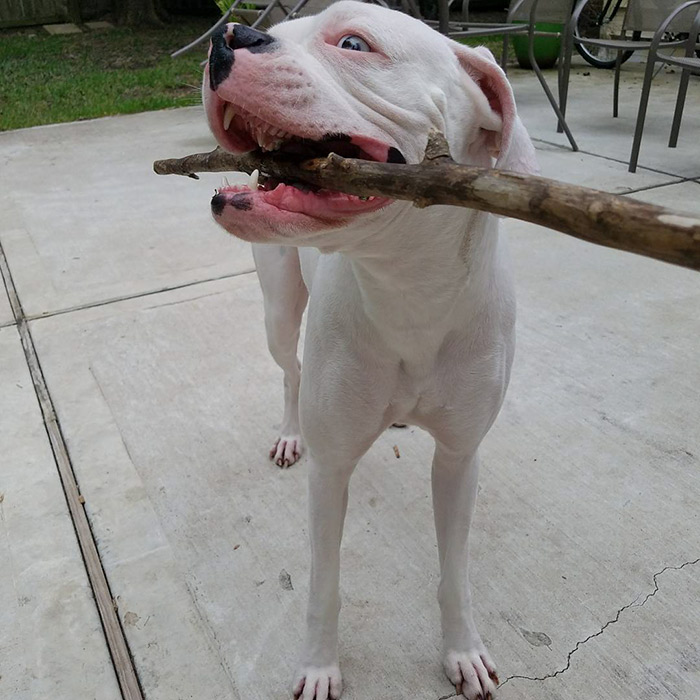 10. The Boxer breed dates back to England in the 19th century and was bred to be a hunting dog.

Today’s Boxer is a descendant of Bulldogs and the extinct breed called Bullenbeisser. In the past, the main working task of this breed was to seize and hold the prey until their owner arrived.

The Deutscher Boxer Club was established in 1895 and in 1904 the club published the first Boxer standard. During the late 19th century, the breed was introduced to various countries in Europe. The United States learned about the Boxer breed towards the end of the 20th century.

The Boxer breed had excellent hunting skills but also worked alongside the military during WWI and WWII. At the end of the second war, returning soldiers took the dogs home with them and became companion dogs. Some Boxer breed owners used their dogs as a guard dogs while others entered them into prestigious dog shows.

Currently, the Boxer dog breed is known best as a family or companion dog. However, some of them do live on ranches and farms that require them to use their natural hunting skills.

Albino Boxers greet strangers with a wary look but often respond friendly. The Boxer breed in general is a natural guard dog due to their natural watchful demeanor.

They are only aggressive when acting in defense of their home and family.

12. White and albino Boxers are an excellent choice as a family pet.

Their nature is to be friendly, loyal, and a great playmates for children. They also make great companions as well as have the skills to help on farms and ranches.

Are you ready to welcome a white or albino Boxer into your family?