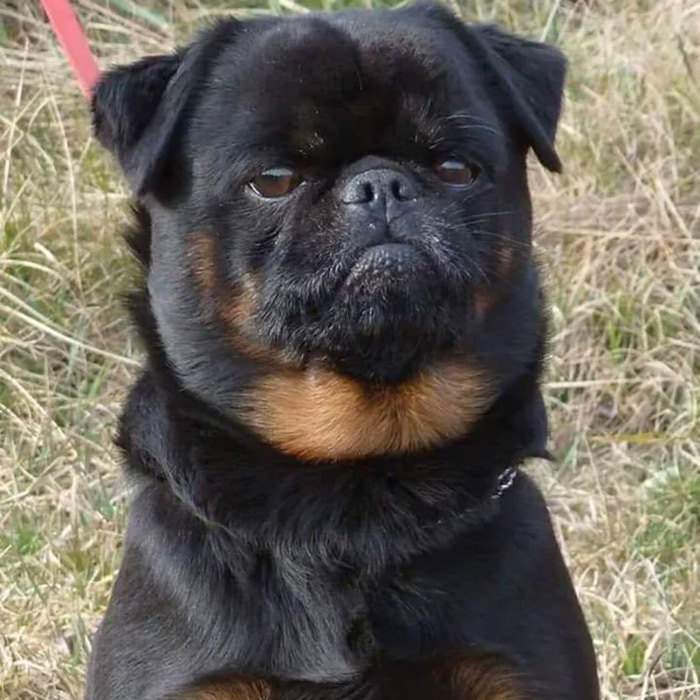 Mixed breeds dogs are on the rise! In recent years, owners have been more drawn to mixed breeds thanks to rescues becoming more popular, and the health benefits of breed variety in a dog.

Many mixed breeds are becoming standard, such as the Goldendoodle, Bernadoodle, etc., but the the Pugweiler is not the most common dog mix known to man, though it is an adorable mix.

A Pugweiler is a puppy of a Pug and a Rottweiler. It does not matter which parent is which, but combining the two creates a miniature version of a Rottweiler in coloring, with a pug face usually.

This breed is not very common, as breeding large dogs and small dogs can be quite risky, but the two breeds are very loved and it’s no surprise that people are drawn to create a combination of the two.

Let’s learn more about these parent breeds and what makes them so special.

History of the Pug

Pugs are an ancient breed, with roots dating back to 400 B.C. in China.

They were bred as companions for the wealthy. That’s actually why they have wrinkles on their face, the Chinese believed the wrinkles resembled the character for “prince.”

Their popularity skyrocketed across the world and soon the breed was one of the most popular across the globe. The Pug was recognized by the AKC as a breed early on in 1885.

The Pug is classified as a companion dog, which is exactly what they do best.

They have an easy going temperament, thrive for companionship, are affectionate and playful, and love to be the center of attention.

It’s no surprise royals latched onto this loveable breed with their wrinkled face and great personality.

History of the Rottweiler

Rottweilers are commonly believed to be one of the oldest dog breeds.

The Roman Empire is believed to have created the breed when they needed a strong dog to move and guard their herds all across Europe.

Using Asian Mastiff type dogs, they are believed to have bred the first distant relative of the Rottweiler, leaving them behind in Germany when they abandoned the area.

The formal history of the breed dates back to 1901, when the first standard Rottweiler was bred by the International Club for Leonbergers and Rottweiler Dogs in Germany.

The breed was officially recognized by the American Kennel Club in 1931.

In history, Rottweilers served many different roles. Mainly, they were a guardian of people or flocks, but also rescue dogs, draft dogs, a drover’s dog, and much more.

The breed is large, fearless, loyal, intelligent, obedient, and actually quite friendly, making them a great working dog or companion dog for people nowadays.

Pugs are classified as small dogs, weighing in around 14-18 pounds, while Rottweilers are in the large or extra large category, averaging about 90-130 pounds.

Pugs are round and short, with flat faces and wrinkles, while Rottweilers are tall and muscular, with an average snout and stocky build.

Pugs have a fairly standard double coat, usually fawn or black, with fawn having black markings around the muzzle and face.

The coat is short and smooth, but sheds heavily. They require regular nail trimmings, as they are not a working breed and will mostly dwell in the house.

It’s important to know the needs of a flat nose breed as well.

They cannot tolerate heat or altitude as well, and must be closely monitored to ensure they remain healthy.

Rottweilers have a short double coat that is straight and coarse.

They have undercoats that vary depending on the climate in which they live, but are known to be shedders.

Their coat may feel silky, but certain parts are longer and shorter, depending on where it is on their body.

The Rottweiler is always black with markings that are some variation of brown.

The markings appear over the eyes, on the cheeks, on their muzzle, on the chest and legs, and beneath the tail.

The two breeds do not have much in common, as you can tell.

Breeding a small breed and large breed can be dangerous, and combining the two different personalities could create behavioral and health issues.

Dogs of the Pug Rottweiler mix can take after either parent breeds in any aspect, making them inherently hard to predict.

However from photos we have found online, most pugweilers seem to take the face and body of the pug and the coat of the rottweiler. 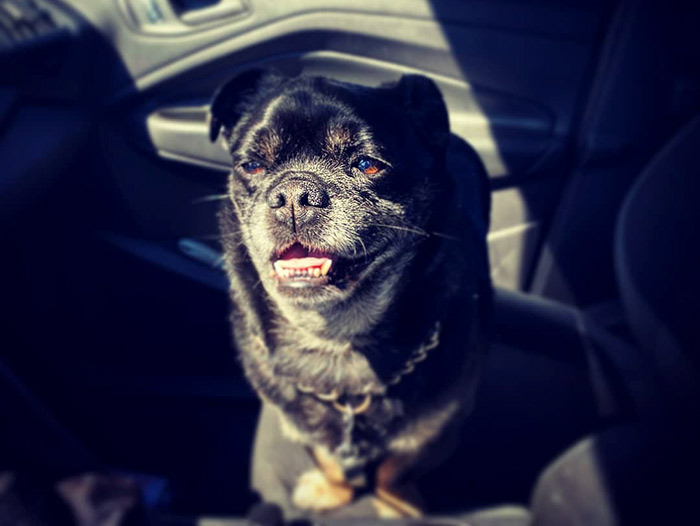 We mentioned early that mixed breed dogs are becoming more popular, and with good reason.

Not only is rescue becoming more popular, but mixed dogs are oftentimes healthier than purebred dogs.

To put it simply, mixed breed dogs take the best and worst things from their mixes, creating a lower chance of the negative things affecting them.

Purebreds, on the other hand, take the good and bad of the one breed, which means the bad can affect them more, as it is not offset by other good.

A study found that purebred dogs have a significantly greater risk of developing many of the hereditary disorders in their bloodline.

This does not mean all mixed breed dogs are healthier than purebreds, or that purebreds are unhealthy.

With proper genetic testing and breeding, purebred dogs can be extremely healthy, and mixed breed dogs can have many health conditions as well.

But as a rule of thumb, mixing breed pools allows genetics to diversify and lowers risk of diseases or ailments present in the breeds, whereas purebreds have a higher chance of developing their breed’s medical conditions.

While mixing up the gene pool can help lower the risk of some ailments or diseases, health problems still naturally occur in both breeds. Pugs are notoriously one of the least healthy dog breeds out there.

The Pug’s lifespan is estimated to be between 12-15 years, which is quite a decent span, but in that time, they may encounter many problems. Pugs are prone to and commonly known to suffer from:

Rottweilers are a fairly healthy breed, but also have their own ailments. They live around 8-10 years, which is average for a large dog. Rottweilers are known to suffer from:

Combining the breeds can result in any of the following issues from either breed. Most notable, eye issues and bone and joint issues occur in both, making them likely to occur in a crossbreed of the two. 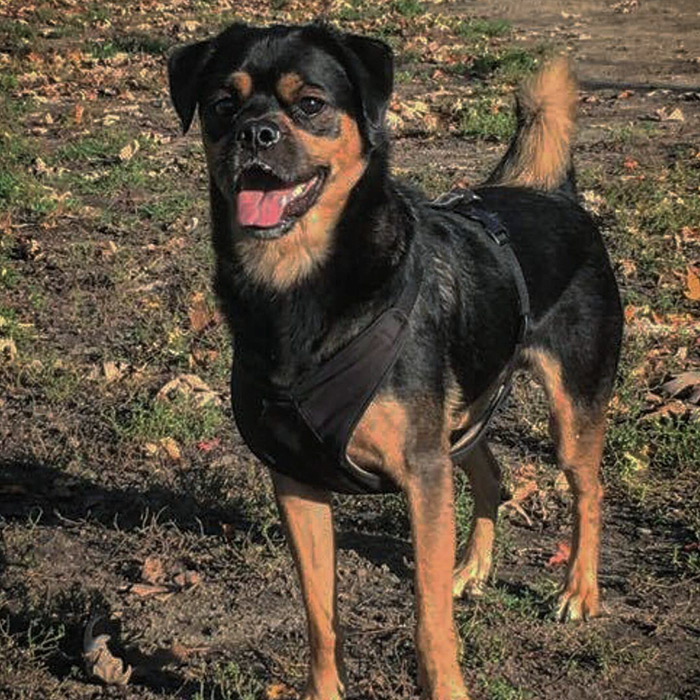 A Pug is a companion dog and the Rottweiler is more of a working dog, but has become more of a house dog in recent years.

Because of this, the two are both suitable to be house pets.

Pugs are content to be lazy and lounge around on the couch.

They’re friendly to most everyone, including other animals, children, etc. and do love to play.

They even make great apartment pets, though they can be a bit noisy.

Rottweilers are a bit more of a protective dog at first, but with proper introductions, can do well with just about anyone.

They may not do well around small pets or children, and require a bit too much exercise to be kept in an apartment.

Combining the two creates a dog who will likely need exercise, but not too much that it may cause a health issue, should live in a house, and be slowly introduced to small animals, other pets, children, people, etc.

This all depends on the genetic makeup of your Pugweiler, and the dog itself, of course.

Pugweilers will require frequent grooming, as both breeds are very prone to shedding.

It’s important to check their nail length as well, and keep their coats nice and fresh.

Bacteria is likely to occur in their wrinkles, so it’s important to clean those as well and keep the area dry.

Because of this, you will want to monitor how much time they spend outside in humid or wet conditions.

How to Get a Pugweiler

Pugweilers are not a commonly bred mix for a number of reasons, including health issues and the unlikely pairing, but it is still possible to find them, though not often from reputable breeders.

It’s important not to adopt from unethical breeders who may not take care of their dogs or do any genetic testing.

Instead, check your local shelters for Pug and Rottweiler mixes. Check out Petfinder or other pet adoption websites to see what mixes are available and try to find one there.

You never know what mixes you could find in a shelter, and an oops litter is more likely to have the Rottweiler Pug combo than a breeder is.

On average, pet adoption in the US ranges from $50 to $350, depending on the shelter, age of the dog, medical issues, etc.

So now you’ve learned all about the Pugweiler, an adorable, unlikely crossbreed that may have stolen your heart.

Like with any breed, it’s important to understand any potential behavioral or health issues before adopting a dog into your home.

If you’ve done that and understand the two breeds, a Pugweiler could be an excellent addition to your family!