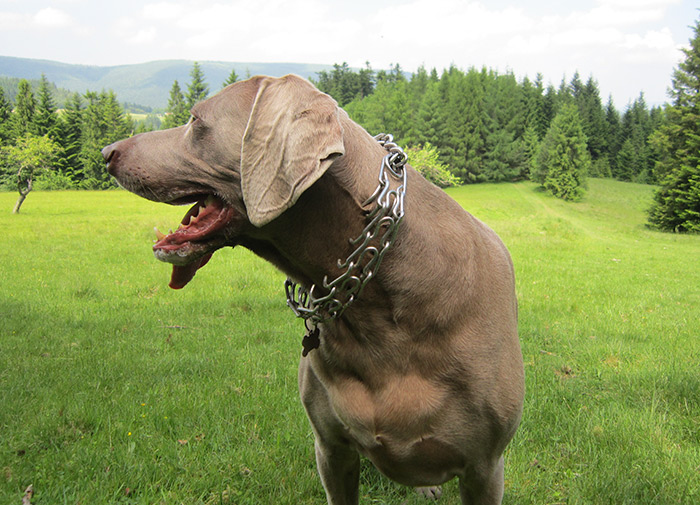 Anyone who’s had a rowdy animal could sympathize with wanting an easy solution to their bad behavior. We’ll admit that there are sometimes you feel the need to show them who’s the alpha. When dealing with a living, breathing animal, it’s important to question techniques that go beyond vocal admonition. But are prong collars the way to go?

What is a prong collar?

A prong collar looks like something that broke off your bicycle. Rather than keeping your two wheels running, it’s meant to be worn around a reactive – or potentially aggressive – dog’s neck in lieu of your everyday collar.

The idea is that as soon as the dog starts to react aggressively or pull at its lead, the prongs dig into its neck as a physical deterrent, meaning to stop them before they can fully exhibit bad behavior.

Some who use them leave them on their dog regularly, rather than removing it after a walk or being out in public.

The argument used in support of prong collars is that they are a training device.

People use it in hopes of preventing a dog from reacting badly to something. They’re meant for dogs known to have aggressive or undesirable behavior; i.e. not for training the new family puppy. Those in favor of using them say that they’re meant to be used in extreme circumstances for serious cases of unruly dogs.

There are a certain number of people who claim that prong collars are effective.

Some supporters say they witnessed almost instantaneous results. We have to question these results, though. They may be instantaneous, but what about in the long run?

Your average dog owner isn’t a professional and does not have a experience in dog psychology.

They argument of “I know my dog” is a bit moot when using something that greatly resembles a medieval torture device.

Many professionals who specialize in dog training have noted that rather than teaching your dog something new, prong collars just increase a dog’s discomfort and instill a new fear.

In fact, association of pain and suffering when wearing such a collar can rub off onto what a dog experiences when wearing it.

If you put a prong collar on your dog before going on a walk where you see strangers or children, the dog will associate the painful collar with these things which will lead to them to fear or even end up acting out against these things.

Using a prong collar on a dog is cruel as it can cause lasting physical and pyschological damage to the dog.

San Fancisco’s SPCA break down the myths and facts about prong collars.

One popular myth says that dogs’ necks have thick skin and aren’t as effected by prong collars.

The SPCA says this is very factually false – dogs’ necks actually have thinner skin on the back of their necks than humans do.

We would never imagine submitting a human to such a thing, so just imagine the pain the dog would experience.

One of the biggest arguments against prong collars is an obvious one (once you think about it): dogs can’t talk.

Their inability to properly communicate with you may be what’s causing their misbehavior, but it can also cause their misfortune.

There is no way to know what a dog is feeling.

Reading their emotions just by body language is no where near an exact science.

How in the world can you tell if a prong collar is working?

How can you tell if it’s hurting your dog?

Forcing a prong collar on a creature that can not properly communicate with you is an extremely unfair power play that asserts an unfair dominance.

In reverse, because you can not properly communicate with your dog, there is no way to be sure that your dog understands the message you are trying to send with a prong collar, thus putting its effectiveness into question. 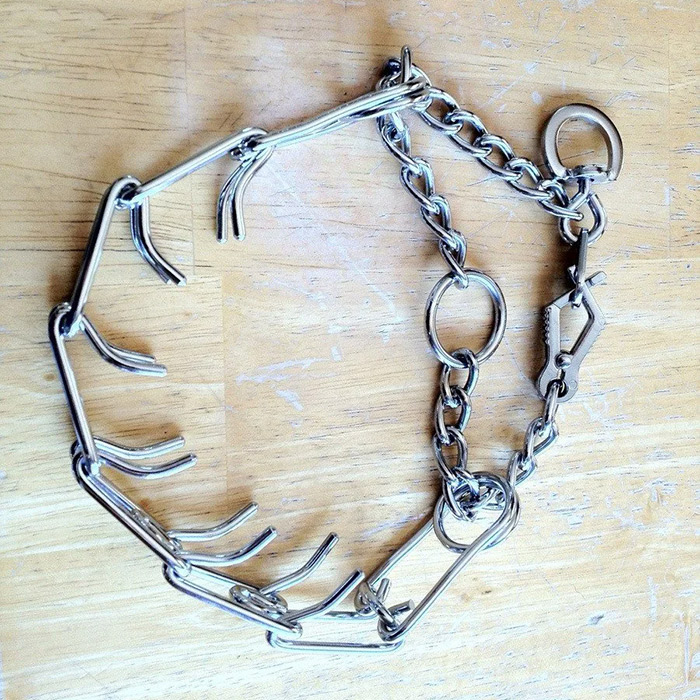 Repeated use and strain from these collars can injure glands and nodes in a dog’s neck, potentially causing damage.

Dogs subjected to these collars can also suffer from neurological problems and soft tissue damage.

In some horrible scenarios, the prongs actually puncture the dog’s skin and stab them in the neck. We struggle to find how this could be acceptable to anyone.

Aside from being painful, the use of prong collars can have an adverse effect on the dog’s behavior

The American Veterinary Society of Animal Behavior (AVSAB) enumerates several reasons why. These include:

The arguments for prong collars are made in the hope of training good behavior into a dog, when in fact many who specialize in dog behavior and training cite these opposite reactions, making the dog’s behavior even worse than before use of the prong collar!

This could potentially put you in more danger of an attack if you’re exacerbating a reactive dog’s aggressive side.

Prong collars don’t help change the bad behavior, they only suppress it. Which means they won’t solve any problems, just put them on the back burner for another day, all while having detrimental psychological effects on a dog

Vets across America have not yet come to a consensus on prong collars.

A few vets will say that there is a time and place when they’re meant to be used, but not all the time and most definitely with qualified supervision.

Regardless, most of them agree on one thing: prong collars are not fool-proof. They have many pitfalls and there are other training solutions out there that are considerably safer for both owner and dog.

The alternative to prong collars

Many vets, humane societies, and dog training specialists encourage turning to professional training and being an active owner.

Training almost any dog is possible, but the key is patience. They won’t learn over night and your only communication tool is through training techniques, so it will take time.

However, many professionals have found very simple and humane ways to teach a dog good and bad behavior.

They emphasize that the key is not relying on just one technique – you need to encourage good behavior in your dog while also discouraging the bad. This doesn’t mean punishment. It means determining the action that encourages bad behavior and then removing it.

An example the AVSAB gives is getting your dog to stop jumping on a visitor at the front door.

Rather than diverting the enthusiastic dog’s attention off your visitor and onto yourself (refocussing its bad behavior onto you), stand still and quiet and don’t engage the dog until it’s calmed down and sat.

Then you reward it with a treat for positive behavior.

This may feel a bit laissez-faire and inattentive at first, but as your dog learns the proper way to act when the doorbell rings, life will be much easier for you both.

If your biggest concern is training your dog how to properly walk on a lead, there are plenty of alternatives that many have found to be perfectly effected.

Various types of head and body harnesses exist, with the lead trailing from their front or back depending on your dog’s breed, size, medical conditions, or training needs.

Even if your dog has a few screws loose, simple collars like these can be more effective than painful ones.

While there are some who do forgive the use of prong collars, they tend to do so with the caveat that these devices are used sparingly by trained professionals. It’s rare the average dog owner has such skills. Being a dog owner has its ups and downs, but putting your time and energy into eliciting the best behavior from your dog seems by far a better pay-out than a harmful and fear-inducing device.