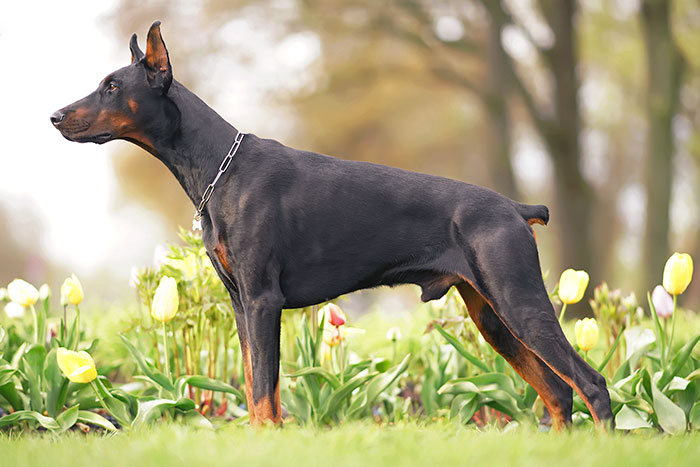 Some dogs have naturally short tails. Other breeds, however, have their tails shortened through a procedure called docking. The practice has existed since at least Roman times for a variety of reasons. This hotly debated topic rarely sees middle-of-the-road positions. People are either for or against docking. Let’s explore docking so that you can form an opinion on this surgery.

Owners of at least 70 breeds look to tail docking to achieve the breed standard. The procedure is done at two to five days of age using one of two docking methods. Neither is done with anesthesia as the pups are too young to risk being put under.

One tail docking procedure uses sharp scissors to remove part of the dog’s tail. While quick, the procedure cuts through a significant amount of tissue, bone, cartilage and nerves including seven highly-sensitive nerves.

The other procedure starves the tip of the tail of blood. A rubber band tightly wrapped around the tail does the trick.

Tail Docking: Then and Now

When tracing back trail docking, myriad reasons are found. The ancient Romans believed docking the tail or portion of the tongue, for example, prevented rabies. Later recorded history makes the argument that working dogs with long tails were likely to experience injuries as adults thus being a preventative measure.

That said, throughout the documentation of tail docking, mention of aesthetics are made. Today, most docking achieves a particular look. Language across different breed guides is inconsistent although since the mid 70s there has been a push to remove mention of looks that can only be achieved through surgery. Many places have laws that prohibit docking except when medically necessary. Most veterinary associations have policies and position statements clearly against docking. There are rare cases when a dog’s tail is too long and docking is recommended.

What to Know if Considering Docking

Tail docking hurts. It is amputation done without anesthesia that either causes significant damage through cutting or has the tail slowly die. Puppies scream during the cutting procedure and subsequent stitching and are distressed for significant time after because of the pain. Most are too small to take any useful pain meds, similar to why they are not given anesthesia before the amputation.

Proponents of docking say that the dogs do not feel pain because puppies’ nervous systems are not fully developed at birth but this is medically false. Puppies have a fully-functioning nervous system and exhibit signs of pain and distress during and after docking.

In addition to the surgery, stitching and recovery being painful tail docking can give rise to complications. Some dogs develop chronic neuroma. This is a discolored lump of scar tissue. The painful condition often leads to significant harm to the dog as it bites at the dock site to get rid of the thing causing pain, as it perceives it.

Other complications include excessive bleeding, infection and necrosis: the death of living tissue. Occlusion is forced necrosis but it can happen from any amputation and lead to future surgeries or death.

Before docking, be sure to consider the benefits. Is your dog’s tail abnormally long to the point your vet has suggested docking? No? The risks far outweigh the benefits then. In fact, there is zero proven benefit to docking.

Various countries and U.S. states have outlawed docking for any reason except medical necessity. This is because the procedure serves no purpose and is painful and dangerous. While there are dissenting opinions, most veterinarians are opposed to the practice.

Unlike for most questions in life, there is a clear answer here. Taking a puppy within its first five days of life away from its mother and litter to amputate what is ostensibly a limb without anesthesia or pain meds is cruel. All surgeries and recoveries carry risk and exposing such a young puppy to this risk is also cruel.

In addition to being cruel on the physical side, tails are also a part of your dog’s language. They communicate using their tails. Dogs signal to other dogs and humans their mental state. They communicate fear and friendliness, along with other emotions. Docking puts dogs at a disadvantage when communicating with others in its pack.

Tail-docking is an outdated procedure performed to meet appearance standards. Most professionals do not support and will not perform the practice. If a breeder states they will provide a dog with a docked tail, they are likely doing it themself or having it done illegally. The pain and risk to the pup is not worth this completely unnecessary practice.

(Related: Is It Cruel To Crop Your Pitbull’s Ear?)