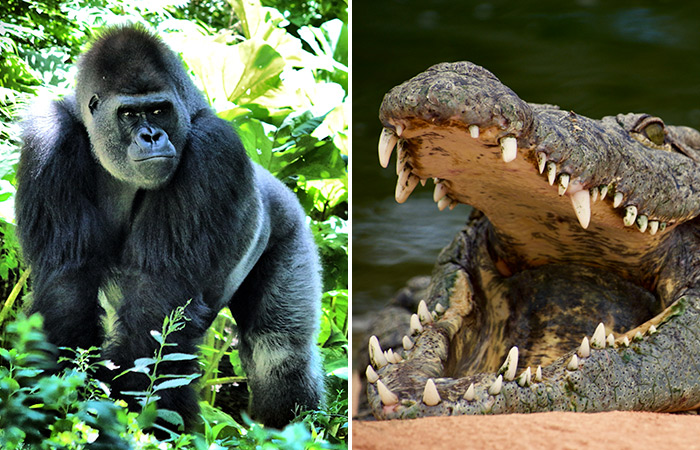 It’s time to answer the age old question of who would win in a fight between the ferocious crocodile and the powerful gorilla.

How would their differences in attributes and instincts measure up against each other? Who would win? Let’s find out.

Lets make it interesting and put the biggest and baddest gorilla on the planet, the silverback gorilla, into the arena.

Silverback males stand on average 6 foot tall and can weigh up to a whopping 500 pounds.

The male gorillas have broad, muscular shoulders and a crest, or ridge, that differentiates them from the females. This crest is designed to help support their strong jaw muscles and teeth. And even though they are herbivores, their long sharp canines can deliver an incredible amount of bite force, 1300psi.

Male gorillas show an unbelievable amount of strength. They have been documented lifting over 1800 pounds and throw with a force of nearly 1000 pounds!

Not only are they absurdly strong, gorillas are also fast. Some gorillas have been recorded moving over 20 miles per hour.

In addition to the size, strength, and speed, gorillas are also highly intelligent animals. In captivity, gorillas have been documented showing complex emotions, form family bonds, use tools, and recognize the past and the future.

Gorillas have been shown to have an IQ that range between 75 and 90. For comparison, an average human IQ is 100.

A gorilla named Koko was taught sign language and learned to communicate with the handlers. She possessed a vocabulary that exceeded 1100 signs.

Gorilla have little to no predators in the wild and because they live in large groups and are highly communicative, which makes them highly effective at defending themselves from any potential threats.

A gorilla’s greatest weakness is his predatory instinct or lack therof. Gorillas are herbivores and do not hunt for food. They are not violent animals and will only attack when they feel threatened.

Male saltwater crocodiles have been recorded at lengths of 23 feet and weights in excess of 2000 pounds.

Crocodiles have the strongest bite of all animals. Their bite force measures in at a colossal 3700 pounds per square inch! When a crocodiles latches its jaw around its prey, its game over.

Their tough skin is like armor and covers most of their body, except their underbellies.

Although they are most agile in water, crocodiles are capable of galloping on land at speeds of 8-9mph over short distances.

Crocodiles are ambush hunters. They live in murky water which allows them to stay completely undetected to animals that come to drink or cross.

When an animal wanders close, they grab it and lock on with their immensely powerful jaws and drag it under water. And since crocodiles aren’t equipped with teeth meant for chewing, they will grab a limb and then use its tail to rotate its entire body to twist a piece off. This is known as the death roll.

. Although they most feed on insects, fish, birds, frogs, lizards, crustaceans and small mammals, they have been documented eating animals like zebras, water buffaloes, sharks and wildebeests.

Crocodiles have little to no predators and occasionally get into tussles with hippos, jaguars and leopards.

Contrary to popular belief, crocodiles are intelligent hunters, who care for their young, use tools and hunt in packs.

They have excellent vision, highly developed smell, exceptional hearing and the extraordinary ability to sense movements in the water.

Combine all these with their immense jaws and teeth and you have a formidable predator.

Ultimately, we believe the odds are in the crocodiles favor.

The crocodile is a predator with more than a 1000 pounds weight advantage. Their bite force is immense and their instinct to kill is second to none.

Crocodiles often kill things that are much larger and heavier than gorillas and dragging a 500 pound gorilla into the deep end would not be an insurmountable task.

The gorilla lacks the instinct to kill and you might think that gorillas could use their superior intellect to fight and avoid the crocodiles attacks, but their fighting strategies are simplistic and consists of wildly slamming their fists into their opponent and biting with their long canines.

A crocodile won’t care at all about being charged. It’s dinosaur brain will just be singularly focused on chomping down and bringing its prey into the water.

The crocodiles thick skin and awkward body design would fend it from any attacks from the gorilla.

Once the crocodile gets a single bite on the gorilla, it’s most likely done for. No amount of wrestling, wiggling or prying will unlatch the ferocious jaws of a crocodile.

The crocodile will drag the struggling ape into the water, perform its death roll and maim and drown the gorilla.