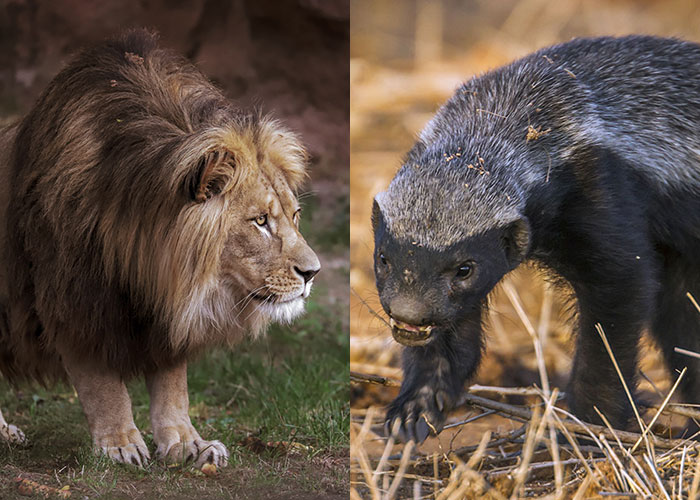 Everyone loves a good story about an underdog facing insurmountable odds and overcoming their foe through sheer will and determination.

A honey badger squaring off against a lion is one such match-up. While most people would put their money on the lion, we shouldn’t totally discount the honey badger.

In the past decade, the the honey badger has cemented his reputation as being a fearless badass after ‘The Crazy Nastyass Honey Badger‘ video went viral in 2011.

Could the honey badger’s fearless, cunning and crafty nature outsmart the lion in a head to head fight?? Let’s find out!

In a fight against a lion and a honey badger, one of the primary factors to consider is their respective size. Size has a huge impact in a fight, and that is true in the animal kingdom as it is in the boxing ring. Unfortunately for the honey badger, it gives up a ton of size and weight.

With a top speed of around 50 miles per hour, the lion is one of the fastest land animals in Africa, coming in only second to the cheetah who can reach a staggering 74 mph. However, due to its poor stamina, the lion can only reach its top speed for a very short duration. The lion is more of a sprinter and not a marathon runner.

The honey badger can muster speeds of up to 19mph, but what it lacks for in speed, it more than makes up for in agility. The honey badger is a very nimble creature. It can twist, turn, shuck and juke its way out of precarious predicaments.

The mighty lion is known as the king of the jungle for many reasons and one of those reasons is the arsenal of weapons it has at its disposal. First, its retractable claws are 1.5 inch long and extremely sharp. Their razor blade like claws allow them to slash, cut and grip their prey with ease.

Their canine teeth are sharp and long and can grow up to 4 inches long! These daggers and specifically tailored to sink deeply into its prey and to sever spinal cords. To top it off, the lion can deliver all this damage with a bite force of over 650 PSI!

What the honey badger lack for in size, is more than made up for in his cache of weapons.

Honey badgers have sharp claws that can extend up to 1.5 inches long and powerful teeth that are strong enough to crack through a tortoise shell.

Underneath the honey badger’s fur is a rubbery and loose layer of 1/4 inch thick skin. Coupled with it’s flexible spine, these traits become quite useful when it finds itself in the mouth of a predator. Should a predator somehow get a hold of a honey badger, the honey badger can simply bend its body and attack the predator’s face with its sharp claws and powerful teeth.

(Related: Why are Honey Badgers so hard to kill?)

Sometimes it’s not the most powerful or biggest opponent who wins, but rather the most shrewd and cunning.

Lurking in the small body of the honey badger is an enormous brain. They are one of the few non-primate species to use tools, which is widley consider a sign of intelligence in the animal kingdom.

Honey badgers that were kept in captivity have been known to work together to use rakes, rocks and sticks to unlock gates and escape from the enclosure.

Lions are no dummies either. They are the smartest of all the big cat species and are able to solve puzzles that their leopard and tigers cousins couldn’t.

Lions are predators through and through. Their instincts to kill is strong. To hunt, they stalk their victims until they can get close enough to pusue them, pounce on them and then use their powerful claws to maul their prey and crush their necks.

While lions have no known predators and are at the top of the food chain, male lions routinely have to defend their pride against the threat of another lion trying to take its position.

Honey badgers are fearless animals. The Guinness Book of World’s Record even anointed them ‘The World’s Most Fearless Creature.’

They have been known to take on powerful animals, such as the oryx, which is a a large antelope that is more than 10 times it size. They’re also persistent hunters and are willing to travel 20 miles in their pursuit of a meal.

While most predators avoid eating venomous snakes, 25% of a honey badger’s diet consist of these life-threatening slithery reptiles.

This fight is like the first Rocky movie, where the lion is Apollo Creed, the undisputed champion of the world and the honey badger is Rocky, the -4500 underdog, who is full of heart and tenacity.

While our hearts are wishing for a honey badger victory, our head tells us differently. In a head-to-head fight, it would be in your best interest to bet on the Lion.

The sheer size, power and weapons of the lion ensures that the honey badger would have great difficulty mounting an offense.

It would be a one-sided fight with the honey badger constantly defending and avoiding the vicious attacks of the lion.

The lion with it’s short gas tank would eventually decide this feisty animal is not worth the effort and move along.

If you think the honey badger has absolutely no chance and would get mauled immediately, check out this video of a honey badger squaring up against 6 lions and living to tell the tale!