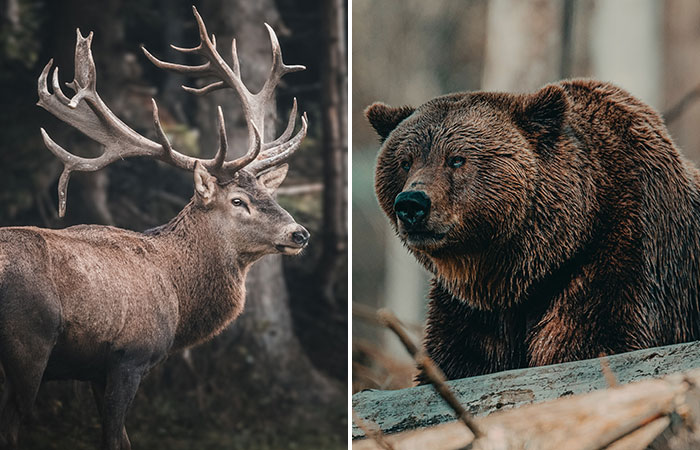 A grizzly bear is wandering through the woods when he spots a massive moose lurking from behind a nearby bush. They make eye contact with neither side backing down or giving up an inch of ground.

The grizzly bear came here for one reason and its not leaving until dinner is served. However, the moose doesn’t intend just to roll over and die. Both of these animals will battle to their last dying breath.

In a fight between a grizzly bear vs a moose, which of them would win?

Moose vs Bear : Size and Weight

Grizzly bears are no slouch in the size department either. Males can get up to 800 pounds and when they stand upright on their hind legs, they can reach 8 feet tall.

No man, woman or child can out run a grizzly bear. Not even the world’s fastest man, Usain Bolt, who can reach speeds of 27.33 miles per hour. A grizzly bear’s powerful legs can propel this ferocious beast to 35 miles per hour. Additionally, a grizzly can swim and climb tress. Pound for pound, its one of the most agile animals in the animal kingdom.

An adult moose can run about 35 miles an hour on land for short bursts and they can maintain a trot at speed of about 20 mph while covering large distances.

Moose are born knowing how to swim and continue to be great swimmers as adults. They can reach speeds of 6 miles per hour in the water.

A Grizzly bear’s claw is its most powerful weapon. It is built for foraging, digging, excavating and doing critical damage to any opponent it might face in the wild.

Their claws are thick and long and can grow up to 4 inches and they have been known to take out mountain lions and wolves with one swipe.

Much of this swiping power comes from the large hump on their shoulders, which is a powerful muscle they use to power their forelimbs.

Grizzlies also have incredibly powerful jaws which can deliver a biting force of 1200 psi. To put that in perspective, a lion can deliver 650 psi and a tiger can dispatch 1,050 psi.

To top it off, grizzly bears are incredibly strong. They can lift over 1000 pounds and it is estimated that a bear’s strength is roughly equal to that of 6 men.

Moose are well equipped for a fight too. Weighing in at 1,600 pounds they are tremendously powerful. During mating seasons, their neck muscles expand to twice their normal size and their thick forehead skin acts like armor against getting punctured.

Contrary to popular belief a moose’s antlers is not its first line of defense, a moose’s primary defense is its sharp hooves, which it is capable of kicking in all directions. John Crouse, a moose researcher, says they have a lot of dexterity in their kicks;

"The front leg will come straight up with that hoof, they’ll also come forward and kick out at the side, and they can come down as well, on to the top of your head or shoulder. From what I’ve observed they can pretty much kick 360 degrees around them.”

A moose’s antlers don’t come into play as much as you would think. Their antlers are used mainly for displaying and for dueling with other moose.

There’s a stereotype, especially among hunters that moose are stupid creatures. Although their dimwit expressions and slow movements give that impression, moose are intelligent animals and are capable of problem-solving.

Grizzly Bears are considered one of the most intelligent land animals of North America and have one of the largest brains relative to its size. They are highly evolved social animals, with social hierarchies and structured relationships, can perform complex tasks and have excellent memories.

Fights are serious and violent affairs. They are usually quick and intense bouts that often lead to serious injury or death.

A researcher observed moose fights as being "extraordinarily violent in an attempt to twist an opponent’s head, shove him backwards, cause him to fall, and gore him."

Dominant moose were willing to fight to the death in order to secure a mate and pass on their genes.

Sparring on the other hand is different than fighting. The intention in sparring is for younger moose to practice their abilities and gain experience. The same researcher observed that sparring between moose often consisted "of little more than gentle antler contact and mild pushing."

A grizzly bear’s aggression are well in the animal kingdom. Their relationship with other predators is mostly one-sided.

Foxes, coyotes, and wolverines are generally regarded as pests to grizzlies. Wolves and big cats give them wide berth.

A grizzly will often descend on feeding predators to steal their kill and the other species will leave the carcasses to avoid getting into a fight.

It comes as no surprise that grizzly bears have no known predator besides humans.

Grizzly Bear Chases Down A Caribou

(Related: Moose vs Crocodile: Who Would Win In A Fight?)

Unfortunately for the moose, this is going to be a lopsided fight.

The grizzly bear is too powerful, too big, too aggressive, too nimble and has the tools to dispose of a moose with relative ease.

The moose is a docile animal and prefers not to fight unless it is mating season and a bear rarely backs down to another animal.

The moose can probably buy some time against the bear by shielding itself with its antlers, but the bear is too agile and the moose is just too clumsy to react.

The bear also has a greater range of motion and can grab and grapple to get around the horns. Once it is past the horn, it’s game over.

Here’s footage of a smaller female beer taking on a bull moose. The antlers don’t faze the bear at all. After a few ineffectual hits by the moose, the bear is able to latch on to its antlers and wrestle it down, while clawing and biting.

A bear will win an encounter with a moose 9/10 times. The other 1/10 is on the off chance that the moose lands a lucky shot to the eye of a bear with its antlers.