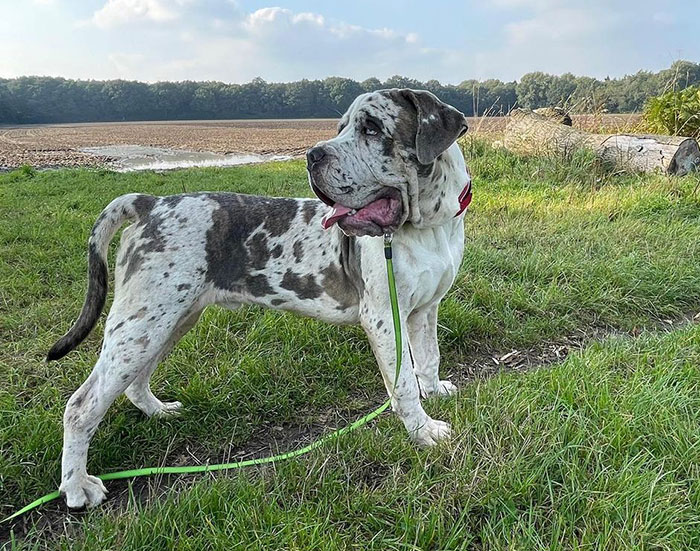 The Mastiff breed is affectionately known as a gentle giant by the breed’s lovers. They are one of the biggest dog breeds around, and one of the oldest recognized breeds. They were used in wars, for guard dogs, as traveling dogs, and now are beloved pets for many people, as they are the 29th most popular breed according to the American Kennel Club. Let’s learn more about this breed, and their many color variations, including the gorgeous Merle Mastiff!

1. The Mastiff descended from the ancient Alaunt and Molosser dogs

All dogs come from somewhere, and the Mastiff is no different. The beloved breed is believed to have originated from Asia, dating back around 4,500 years ago. It’s hard to tell exactly when the “Mastiff” became a breed, as all large dog breeds were referred to as Mastiffs, which is a term derived from ‘Mastin’ in French, which means “watchdog.”

2. They were used by Romans as entertainment

Mastiffs served many purposes for humans, including hunting dogs, protection dogs, guard dogs, etc., but they played a huge role in Roman entertainment. Because of their size, the dogs were brought to Rome to fight bears, lions, tigers, and other animals in their coliseums. It is a barbaric thought now, but back then, people were amazed by their size and thought them to be aggressive dogs.

Mastiffs are often referred to as gentle giants and for good reason. Though they were used as fighting dogs, their huge size is actually rarely used by them for anything bad.

4. They are huge. Really huge.

We keep saying they are giants, but let’s put it into perspective. A Mastiff named Zorba was once the world’s largest dog. He set that record in 1989 at eight years old. He was 37 inches high at the shoulder, 8 feet 4 inches long from the tip of his nose to his tail, and he weighed 343 pounds. While this is an unusually large size, most weigh between 100 and 200 pounds and stand between 28 and 32 inches.

5. There are many breeds of Mastiffs

The Mastiff breed actually encompasses a number of different breeds. To be specific, there are 14 recognized sub-breeds, but the most popular are: Bull Mastiffs, English Mastiffs, Napoleon Mastiffs, and Tibetan Mastiffs. The beloved Cane Corso is also technically classified with Mastiffs! All have different sizes, looks, and coloring but in general are giant, gentle breeds.

6. They have a few naturally occurring colors

Mastiffs have a variety of natural coat colors depending on the specific breed. In order of most common to most rare, these colors include: Fawn (a light grey-brown with a darker face and muzzle), apricot (strawberry blonde to darker brown with a red tint, often has a black mask on face), brindle (brown and black stripes, dark colored with darker face), black (only in Tibetans and others), blue (a steely, silver grey), black and tan (Tibetan only), gold (Tibetan only), 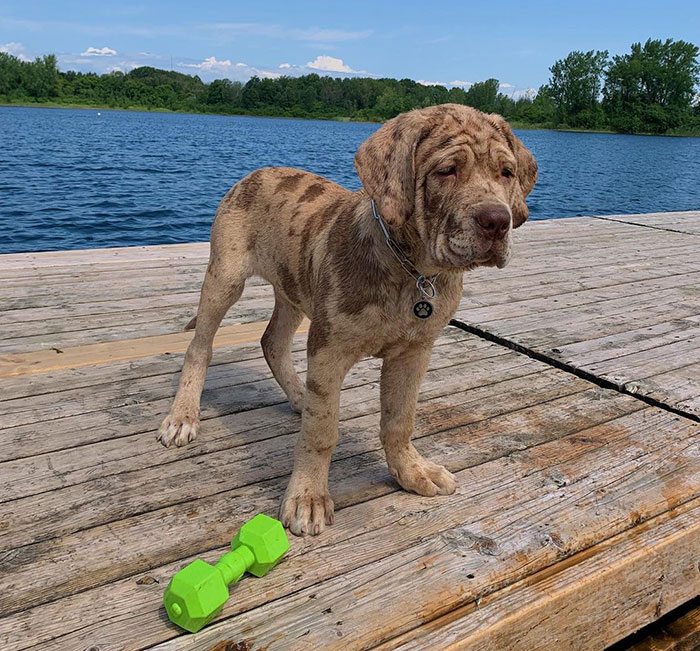 7. A Merle Mastiff is a big risk

Merle coats are beloved by many. Think of an Australian Shepherd’s stunning grey, black, and blue coat and imagine it on a Mastiff. Stunning, right? Unfortunately, at its core, merle coats are a genetic mishap. They only naturally occur in very few breeds. Be wary of breeders offering merle Mastiffs, as it is a non-dominant trait, and when two merles are bred together, the chances of a puppy being double merle are very high, and can lead to many health risks including deafness, blindness, and other health issues.

You would think dogs that were used as hunters and fighters might have a need for speed or entertainment, but Mastiffs are actually fairly lazy couch potatoes. Due to their pure size, you should actually be careful of over-exerting them and causing them to overheat. Like any dog though, they do require exercise, and if left alone and bored, could become destructive.

9. They have a natural urge to protect

One trait the Mastiff held onto from old times is their urge to protect their family and those they love. The Mastiff is extremely loyal and obedient to its owners when trained properly. They treat strangers with polite aloofness, but love their humans hard and will protect them at any cost. They are very sensitive dogs, and have been known to step in when humans are fighting to diffuse the situation.

10. Merle Mastiffs have a shorter life span than other breeds

Unfortunately, large dog breeds tend to have a shorter life than small dogs and the Mastiff is no exception. Their life expectancy is 6-12 years, potentially one of the shortest out there. This is due to size and medical issues which we will discuss next. But know this, a Mastiff’s love lasts forever.

11. Be prepared for some health problems

Big dogs are predisposed to quite a few health problems. All big dogs run the risk for hip dysplasia, which is when the thigh bone doesn’t fit snugly with the hip. Giant dogs can experience this at a fairly young age, and it gets worse with age, eventually leading to lameness in most cases. Also keep an eye out for an eye disease called Progressive Retinal Atrophy, seizures, a kidney disease called Cystinuria, cancer, and the very lethal GI condition “bloat.”

If you don’t like drool, look elsewhere. They even have Mastiff dog collars that include a drool rag. But otherwise, they are fairly low maintenance, clean dogs. They have an easy-to-care-for, dense coat, but do shed a lot. They will benefit from regular brushing and deshedding treatments at home. You’ll want a strong toothed comb to help combat shedding. They also have wrinkles, which can require moisturizer and ointments, as well as special care to ensure there is no bacteria or infection.

13. They are great family dogs

Mastiffs love children and just about anyone. Like any dog, they need socialization and training, but they are naturally drawn to be giant lovers. They are known to cuddle with children, lick their faces, be calm around them, watch babies, etc. It’s important to realize while this is cute, a Mastiff is still a dog and should be supervised around children at all times. They could accidentally knock a child or older family member over while playing, which could be dangerous. 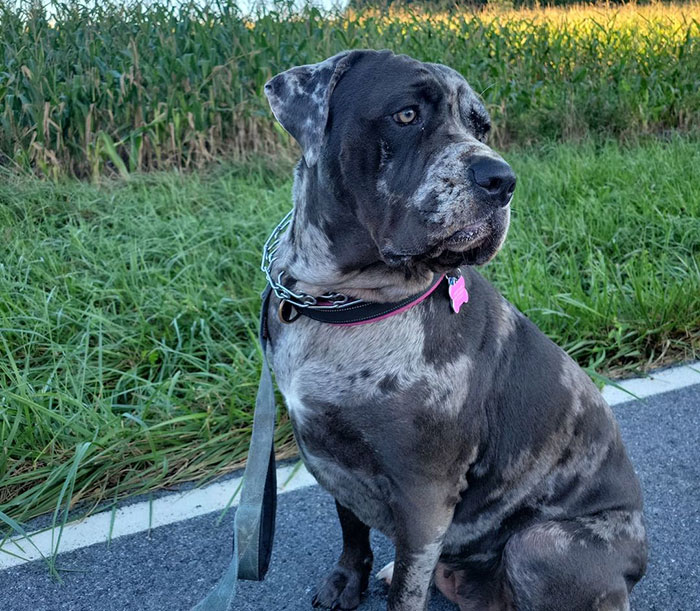 14. They don’t reach full size until 3 years of age

Most dogs are considered full grown at around a year-and-a-half. A Mastiff is not considered full grown until they are three! It is important to know that this is not only in size, but also in maturity. They will keep their goofy puppy demeanor for a long time, which can be cute, but can be dangerous given their large size, if not properly trained. This also means physical activity should be supervised closely. Mastiff puppies are susceptible to joint injuries since they’re still growing when most dogs aren’t, so avoid hurdles and stressful activities until they are over 3 years old.

15. They require lots of socialization

While most Mastiffs are gentle giants, they are still large and a dog, which can be unpredictable, so they could do some damage. It is important to start socializing your Mastiff at the youngest age possible with children, adults, other dogs, small animals, strangers, etc. Since they can be protective, you want them to be open to new people. And since they are so large, you want to teach them to be gentle and not jump, nip, etc. A Chihuahua jump versus a Mastiff jump is quite different and not nearly as cute for Grandma.

Now you see why Mastiffs are so beloved! It’s natural to want one of these gentle giants, but be prepared to do research on what they will need. Find a reputable breeder that allows you to meet mom and dad, does genetic health testing, and allows their dogs to live inside their house and be raised with not only mom and dad, but human love.

If you are interested in a merle Mastiff, do plenty of research on possible defects and understand the genetic trait more. Check out this article for more information on the gene and how it can affect dogs.