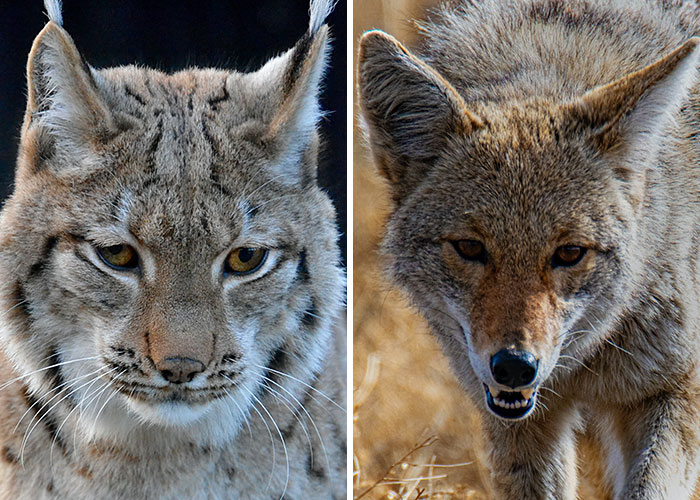 The bobcat and the coyote –– two feared species with very few predators. Yet pitted against one another, who would come out victorious? This is a showdown between the silent stalker and the headstrong aggressor. No two strategies could be more different. The bobcat is patient and methodical, stalking its prey until it’s found the perfect time to pounce. Whereas the coyote overwhelms its enemy through sheer numbers and speed.

These opponents are well matched, with both animals bringing their own unique sets of skills to the showdown. So Let’s take a look at what each animal brings to the table.

Bobcat vs Coyote: Size and Weight

Size is often the main determinant in deciding which animal would come out as victorious in a fight. While both animals are about equal in length and width, the weight discrepancy between both animals is significant.

The bobcat will have a tall task overcoming this difference.

When it comes to top speed, the coyote has a pretty big advantage with a top recorded speed of 43 miles per hour. A bobcat, on the other hand, tops out at around 30 miles per hour.

Sure, if this battle was just about speed, then the coyote would clearly win. But this isn’t a 40-yard dash and Usain Bolt couldn’t take down Floyd Mayweather in the boxing ring. Instead we have to consider how the two animals go about killing. The coyote, with its immense
speed, charges head on towards its prey, lunging for its neck –– there’s little subtlety or tact involved.

Rather than overthink the situation, the coyote wants to get the job done quickly. If the prey somehow manages to get away, then it’s no big deal. There are plenty of other potential victims in the forest.

The bobcat, on the other hand, has a much more refined approach. Silently stalking its prey for hours, the bobcat waits in the bushes and treetops for the right moment to ambush its prey, which is dead before it realizes it was even being hunted. Work smarter, not harder is the bobcat’s credo.

Still, with its superior speed, this one has to go to the coyote.

It should go without saying that the bobcat and the coyote, both notorious predators, can deliver deadly bites by lacerating their victims’ throats.

Yet while coyotes have 42 teeth compared to the bobcat’s 28, the bobcat has evolved to have teeth that are spaced out to fit in-between the vertebrae of its victim, leading to an even more lethal bite.

But the fun doesn’t stop there for the bobcat. This feline also has its signature razor-sharp retractable claws that would no doubt make even a coyote second guess a full frontal attack. This feline has claws that can reach up to three inches –- that’s about as long as a human finger!

While hunting, the bobcat is known to grab its prey in the clutches of its formidable claws. For that reason, the bobcat has another option to overwhelm his canine foe.

Like most other felines, the bobcat is known for its intelligence and patience. Yet it’s unclear of how much use that would be up against the coyote.

While coyotes are no doubt more aggressive than bobcats, it would be foolish to underestimate their intelligence. The coyote is extremely adaptable –– a survivor, first and foremost.

The coyote is known to eat almost anything it can get its paws on, and has even adapted to live in urban environments, sometimes even preying on domestic dogs and cats. And hey, the coyote has learned to team up with others to get what it wants.

Take for example its “friendship” with the badger in which the two animals team up to hunt rodents.

There’s even that viral video of the two species going on a stroll together Surely that’s a sign of cunning and intelligence!

The coyote is known for being an aggressive animal with outsized confidence. Coyotes are willing to take on any animal, be it a rattlesnake or a cow. That aggressive nature will come in handy in this fight.

And as we learned earlier, the coyote often hunts in a group when challenging larger prey. No doubt this is an advanced technique that gives the canine a leg up over the bobcat.

But in a one-on-one showdown, that advantage goes out the window. That said, the bobcat is not without its own set of skills. The animal is known for being light on its feet and incredibly quiet.

Both animals are skilled predators, so this one is anyone’s guess.

Given its solitary nature, the bobcat is resourceful and shrewd. Yet it also means that it engages in fewer hunts than the average coyote, which prefers to hunt in a pack.

In this case, the coyote is most likely a more battle-hardened foe. On the other hand, the coyote may not be as used to hunting by itself, leaving it somewhat helpless when faced in a one-on-one situation.

Final Verdict: Who Would Win in a Fight?

This is really a close match. Both species are skilled hunters and come in at about the same weight and size.

It’s a classic final scene in any movie — the showdown between the protagonist and the antagonist.

If you’re a cat person, you are probably rooting for the bobcat, and if you are a dog person then you’d probably take the side of the coyote. Yet our preferences shouldn’t factor into the decision.

If this battle were to take place in the wild, the edge would have to go to the coyote. In fact,there have been a number of reports of a coyote pack slaying a bobcat.

In a best case scenario, the bobcat would have to get the jump on the coyote after stalking it for some time. Its ability to sneak up on the coyote is its secret weapon. Yet as we learned earlier, the bobcat is most likely not going to be the one to initiate the fight, given its preference for smaller prey.

Given the coyote’s size, the bobcat is much more likely to go out in search of other prey rather than risking life or limb. And when it comes down to it, whichever animal instigates the fight in this scenario is the most likely to win.

An aggressive bobcat would beat a timid coyote and vice versa. It’s really a coin flip. Yet given the coyote’s naturally aggressive nature, the coyote ultimately has the edge in this battle.

While that bellicose instinct might be a weakness when fighting a lion, it ultimately serves the coyote’s benefit. So if you had to place your bets, go with the coyote.