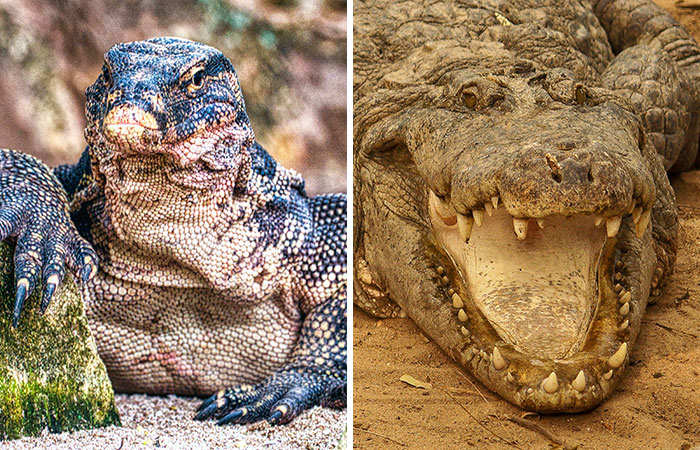 Let’s perform an analysis of these two powerful contenders to make a better determination of which species would have the upper hand in mortal combat.

Before we get into specific comparisons, let’s find out more about these warriors and their backgrounds.

Encased in protective bony plates covered in durable scales, the Komodo dragon is a giant flat-headed lizard with bowed legs and a powerful tail.

This species features an assortment of colors ranging from gray to orange, but every member sports sharp, serrated teeth which complement a vicious bite.

Their bowed legs end in long razor claws ideal for digging or climbing and they have a snake-like forked tongue.

Crocodiles are perhaps best known for their powerful snapping jaws lined with rows of sharp teeth. As their eyes and snout are located atop their heads, they are often spotted lurking just beneath the surface of the water, hunting their prey.

Covered with ridged and plated skin, their bodies are large and end in a wide tail.

Masters of their aquatic environment, they are often found upon the land near the water as well.

One of the most significant considerations for combat is the size and weight ratio. Typically, those with the more substantial size have an advantage in a fight although that is not always the case. Let’s see how these two contenders weighed in.

Komodo dragons can reach a length of approximately ten feet and can pack on enough weight to read 300-333 lbs on a scale. They are the largest variety of lizard and are stolid, well-built creatures.

On the other hand, crocodiles can read a stunning 2000 lbs and can extend twenty feet from head to tail. However, there are a wide variety of crocodiles of different sizes, the smallest of which is the dwarf crocodile that scores a measly 15 lbs and only 5 ½ feet in length.

In making our comparison in this category, the species of crocodile needs to be considered. If facing a smaller species, then our Komodo dragon is on top, but if up against a saltwater crocodile, he is going to be at a serious disadvantage.

More likely than not, though, the crocodile is going to have the weight and size advantage.

There is more to fighting than simply overpowering your opening. An agile opponent can often avoid a heavier, slower opponent and wear him down in order to claim victory. Let’s run a comparison between the two in this category.

Komodo dragons are great sprinters due to their musculature, reaching speeds of up to 20 MPH in a straight line, but have problems with mobility when having to make frequent turns due to their bowed legs.

While crocodiles can swim up to 20 miles per hour and hold their breath for an hour, more than likely a struggle between these two forces would occur on land. In that environment, the crocodile is slow and can only plod about 7 miles per hour in short bursts.

If the crocodile can get the Komodo dragon in the water, it has a decided advantage, but more than likely, his opponent is going to stay where he is most comfortable.

These two reptiles possess different weapons that they use to take down prey and opponents alike. Which set of weapons prove a greater advantage in a conflict between the two?

Our dragon is a sneaky hunter, lying in wait for its prey and exhibiting impressive patience. Once a target comes into range, he will leap out, tearing with his claws and sinking his razor sharp teeth into his prey.

Then he is content to wait. Why? Because his teeth are coated with a toxic venom which prevents clotting, so while the victim bleeds out, the venom sends it into shock and stops its heart. Afterward, the dragon uses its supreme olfactory abilities to track the body.

Not to be outdone, the crocodile employs its own style of stealth, waiting in ambush and then sneaking up on his prey before delivering a decisive snap of its tremendously powerful jaws.

The largest varieties have chomped with enough force to deliver 3,700 pounds per square inch onto its hapless prey.

In the event that a single bite doesn’t finish the job, the croc will drag his meal into the water to drown it, although he will actually eat on land because eating underwater actually puts him at risk of drowning.

This is a tough comparison because the methods of attack are different.

While the croc’s jaws are indisputably more powerful, a miss could spell disaster as the croc is less likely to catch its prey, and the Komodo’s toxin merely needs to enter the bloodstream in order to spell disaster.

We’ll call it even.

A smart hunter can overcome many disadvantages and find a way to claim victory despite the odds. Who’s got the most smarts?

Intelligence in reptiles is often determined by their ability to respond to operant conditioning, which means their ability to learn from their experiences and remember as well as being able to improve and adapt.

Komodo dragons are considered one of the most intelligent reptiles there are, often considered the absolute smartest reptile, although they may arguably be surpassed by giant tortoises. They adapt well to their experiences and learn from their mistakes, becoming more efficient hunters.

This is a fairly close race, though, as the crocodile is also considered an intelligent reptile and performs well with operant conditioning as well, coming in close behind or often right behind the dragon in this field.

As discussed along with their weapons, both creatures tend to stalk their prey from hiding and then ambush them. In this regard, both species are pretty much a tie, especially factoring in that the Komodo will track its prey by scent and the croc’s proficiency in making a quick end to a conflict.

However, the croc is much more aggressive than the dragon, with hundreds of reported cases of attacks on humans, whereas dragon attacks are rare, showing that they are a more reserved, less aggressive species comparatively.

A good fighter will always seek and exploit his opponent’s weaknesses. These two reptiles have many strengths, but do they have weaknesses?

For the dragon, it’s jaw strength. The reptile has a relatively weak bite and has a tough time holding on to prey for long. Of course, the venom means that he doesn’t have to.

Ironically, the croc’s jaw strength can also be considered a weakness, but . . . only on the way up. While it has an astonishing bite, the muscles used to open its mouth are very weak and its mouth can be held closed with a rubber band. Otherwise, being on land makes the crocodile slow and vulnerable to other predators.

We’ll call it a draw, although it’s tempting to award this to the crocodile because despite the dragon’s intelligence, it’s unclear if he would attempt to hold the mouth closed. Factoring in the dragon’s speed and venom, though, that seems to balance out its weakness.

Final Verdict: Who Would Win In a Fight?

There are a lot of conditions that could come into play here to change the winner in this contest. A smaller crocodile is probably going to lose to the dragon because of the size differential and the venom.

A larger crocodile has a better chance of finishing off the dragon with one well-placed bite and dragging it into the water unless it can avoid the bite and strike with its venom.

A very likely scenario is that the crocodile will win the contest, but having suffered from Komodo dragon bites during the exchange, will later succumb to the venom and die as well.

Nonetheless, the size differential of a typical crocodile and the power of those jaws is probably the deciding factor.