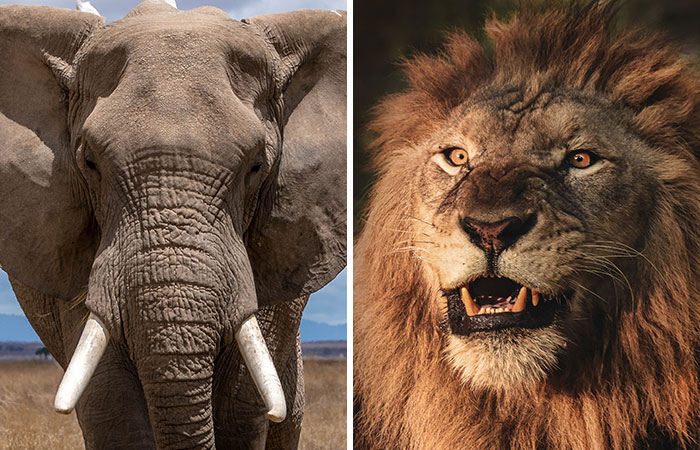 The lion is known as the King of the Jungle or even the King of Beasts. Yet, could the mighty lion alone overtake the colossal elephant? The lion is one of the few species that can actually hunt and kill an elephant.

So if we put these two face to face on even ground, what would be the result?

The elephant obviously has a size advantage, but can the lion match up with tenacity, speed, and its powerful teeth and claws?

Let’s perform a comparison of these two heavy-weights to see who would come out on top in a one-on-one duel to the death!

Before we get into our title match, let’s investigate a little about each of our contenders to see what their lives are like outside of the ring.

Making their home in Africa, elephants are the largest land-based species. They possess a mobile trunk which they used to pick up and manipulate objects, as well as to communicate. Their large floppy ears are adept at managing heat.

The Savannah elephants are larger, and therefore the focus of our competition. They possess long, curved ivory tusks which are great for digging and lifting objects, as well as defense if threatened.

Elephants are social creatures and are known for staying in their family units for most if not all of their lives, which can be considerable as they can live up to 70 years.

The herd is typically ruled by an old and wise female matriarch and life is mainly about finding food and protecting the young. At night, the females form a protective circle with their own bodies, keeping the young secure in the center.

The males are often kept out of the inner circle, forming their own groups as outsiders to keep an eye on their young.

The noble and proud lion ranges through Europe and Asia, but shares the elephant’s stomping grounds in Africa as well. Muscular felines with large heads, sleek bodies, and shorter legs, the males are known for their luxurious manes.

Lions also are social creatures, living in a pride with others of their species. They tend to branch off in smaller groups to hunt, but later congregate together to eat or spend time together.

The females are the pride’s huntresses, and they typically stalk wildebeests or zebras among other prey, working in teams to take down their prey.

The males are the defenders of their territory, ensuring that there’s a safe place for the collective to return after a long day’s hunting or traveling. They usually wait until the females have done the killing and then claim their share of the meal themselves.

The life of a lion is a dangerous one and due to injuries during fights with prey or attacks from humans or other lions, managing somewhere in the neighborhood of 9 or 10 years. In captivity, they can live around 25 years.

Despite the fact that females do the hunting, the male lions perform better against elephants due to their size, so for this battle, we will be considering the King himself.

It may not come as a surprise who is going to lead in the size and weight category, but let’s perform a weigh-in nonetheless.

Our elephant weighs in at a staggering 7 tons! That converts to an astounding 14,000 pounds! As if being heavy wasn’t enough, he can be up to 14 feet tall! He stretches 18-21 feet in length.

There’s simply no way around it, that’s a lot of saggy, baggy elephant that our lion is going to have to contend with if he wants to win this battle.

Let’s see how he looks in comparison.

A lion can weigh up to 500 pounds and stand a little over 3 feet tall, stretching nearly 5 feet in length.

While significant on its own, in this situation, there’s really not much else to say.

The ability to outmaneuver an opponent is an important skill to have and in order to do that properly, one needs to possess great speed. This would seem like another situation where there’s a clear winner, although you may be a bit surprised by the statistics in this category.

Despite their immense size and bulkiness, elephants can range fairly far if they want to, and can actually run up to 40 miles per hour! That weight does come into play, though, as they can’t hold that speed for long without becoming fatigued.

It is also a factor in maneuverability, as they have to shift their bulk to turn when in battle.

The powerful frame of the lion can kick its pedometer up to 50 mph, and his mighty legs grant him the ability to leap about 36 feet!

He is able to quickly maneuver to cut off prey and work well with his pride.

It may have been closer than you expected, but perhaps unsurprisingly, our lion wins here.

While the lion brings a typical armament to battle, the elephant has a few unusual weapons at his command.

His body weight and trunk-like feet make a great weapon as he charges at top speed toward his foe, providing a dangerous trample for any in his way. Those long ivory tusks are not just for show either. While they have a lot of functions, one of them is for combat and he gets a lot of practice with them against others in his herd.

Oh, and that long, thick trunk? It makes a powerful club when employed in battle.

What about the lion? Well, he uses his leaping ability and body weight to leap on his opponent and bring it down if possible. His teeth and jaws are powerful and he uses them to clamp down on his prey’s neck in an attempt to strangle.

He has claws, but more often than not he uses them to grip rather than rend flesh.

His agility and teamwork skills are also weapons at his disposal. Lions are known for countering the size of their opponents by employing different strategies depending on what animal they are facing.

For versatility, if nothing else, the elephant is our victor, here.

Having high intelligence can make up for many disadvantages in combat. Let’s see how our two warriors fare in this category, shall we?

Elephants are famed for their ability to remember, as referenced in the old slogan “Elephants never forget.” They have the largest brains of any land species (including humans) and make good use of it.

They make use of tools, which is always a significant factor when determining intellect. Interestingly, our elephant seems capable of detecting different languages as well and has shown enough perception to recognize some human body language, such as pointing.

Elephants are empathetic toward their young and even demonstrate grief at the loss of their loved ones.

And there’s that famous memory. They are able to remember locations to waterholes or bonds with other elephants that remain in their minds sometimes even twenty years later!

How does our powerful lion stack up?

Like most predators, he’s smarter than the average bear . . . er, cat. He is able to learn and remember and react to stimuli, learning from his mistakes. As previously exemplified, he is able to work well with a team and coordinate different attacks based on which type of prey he is hunting.

However, many lion attacks are unsuccessful. Why?

Well, the lion fails to take into account important concepts such as wind direction and often charges in a straight path to its quarry. The first often provides advanced warning to its target and the second provides an easier opportunity for the animal to dodge or escape. Lions are less likely to pursue after a failed first attempt, perhaps because they don’t have as significant a top speed as most of their prey.

If the elephant’s brilliance wasn’t in itself enough to make this decision, the grave hunting errors on behalf of the lion seal the deal.

Elephants are gentle creatures and when they engage in combat, it is in defense primarily. The presence of young is typically the factor which can provoke an elephant to combat, which typically begins with a ferocious charge, but can employ the trunk or the tusks for maximum effect.

Unlike the elephant, who forages for plant food, the lion’s life depends on hunting and fighting for its meals.

After stalking its prey and ambushing, he will use those hunting techniques and teamwork to bring down prey and then suffocate it by biting on the neck. Despite the aforementioned errors in hunting technique, when on point and undetected, the lion can be a savage killer.

A major weakness can make the difference in a battle. Are there any advantages that our competitors can find to improve their chances in combat?

The elephant does not have much in the way of a disadvantage, primarily because of its size. That, however, can be a weakness as it makes the creature an easy target to hit. Plus, its size makes it more difficult to maneuver against a smaller opponent. It can often take time for an elephant to get to its feet if lying or pulled down.

Their eyes are small and their eyesight is poor, so a predator can take advantage of that as well.

As to lions, their greatest weakness is their lack of speed and power. They typically have to rely on teamwork in order to bring down prey unless it is weak or old. Their bodies are also susceptible to goring, which is a major factor in their shorter life spans.

It’s hard to consider “I’m too big for my own good” to be comparable as a disadvantage compared to the lion’s struggles.

The elephant holds a lot of advantages over the lion, but does not live the ferocious, battle-hardened lifestyle of the mighty lion.

Nonetheless, it’s difficult to ignore the serious size advantage that an elephant possesses, especially taking into account the multiple weapons at its disposal.

While it’s not impossible for a lion to make repeated attacks to the back end of an elephant, taking advantage of maneuverability to gradually wear an elephant down enough to drag it to the ground, it is certainly improbable.

A single lion is simply no serious threat to a single adult elephant. That being said, there are many situations documented where two lions working in tandem have successfully killed an elephant.

In most circumstances though, lions are going to avoid any but young or weak elephants unless starvation is a real threat.

And so, to the victor go the spoils: