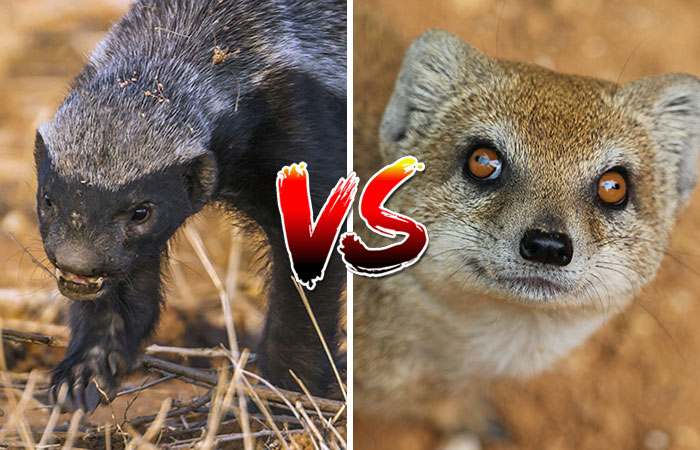 Two mustelids, world renowned for their fearlessness and bravery in the face of danger: the infamous honey badger and the snake-killing mongoose. What would happen if these two ever had a dispute and decided to face off against one another?

It is a lot of fun to speculate, and the best way to determine who would come out on top in an epic death match is to analyze each species and compare them in a series of important categories to determine who has the edge in combat.

Let’s take a look and see who would win in a fight!

These two creatures are famous for their unwillingness to give up against significantly greater odds or predators that are considerably larger and more powerful than they are. Yet, before we get into the intrigues of specific combat abilities, let’s take a look at how each species lives, as this can be important when determining what each competitor brings to the battle arena.

Honey badgers are ferocious creatures with a thick, flattened body and short legs with long claws topping those in the front. He typically has coarse black hair with a wide grayish stripe along his back which vaguely resembles a skunk.

They derive their moniker from their taste for honey, which finds them frequently assaulting hives in a quest for this sweet natural treat. They have no fear from bees, as they possess a thick hide which stingers are unable to penetrate, so when the honey badger comes a-calling, chances are good he will get that for which he came.

Solitary by nature, the honey badger is content to wander alone except when it is time to mate, and he has a reputation for apathy to anything and everything else which precedes it. He doesn’t mind at all making himself at home in another animal’s den if he wants, and it’s no-holds-barred if anything stands up to him.

The honey badger is notorious for being a glutton and will eat well beyond its fill if given the opportunity. He loves a variety of foods, but some of his favorites are honey bee larvae, amphibians, small and medium sized mammals, reptiles, and some roots and berries. However, it is generally reported that they will eat about anything and everything they can get their paws on.

Long, furry creatures with a pointed face and bushy tail, the mongoose is famous for hunting and eating venomous snakes. He uses his impressive agility and cleverness to avoid the snake until he can strike with his short sharp teeth. He also has an evolutionary resistance to snake venom, so even if he suffers a bite, he will more than likely be able to withstand it.

Unlike the honey badger, the mongoose loves company and tends to live in a colony of others of its species, typically in large numbers. They prefer to attack prey as a team and chatter at each other in rather extensive communication.

As omnivores, they enjoy both flora and fauna, snacking on smaller animals such as birds, fish, reptiles (such as snakes, of course), rodents, insects, and worms as well as eggs, roots, berries and a variety of seeds.

Let’s get to it, shall we? It’s time for the weigh-in before the fight.

The honey badger can weigh over 30 pounds and stands up to a foot tall from the shoulder. He is roughly the size of a small to medium dog, but don’t let his frame fool you. He packs a heck of a wallop.

Our mongoose can stretch over 2 feet long with an additional 1 ½ foot added for the tail, but weighs in at a little over 11 pounds in best-case scenarios.

That’s going to give our honey badger nearly three times the weight advantage in this fight.

Honey badger can reach speeds up to a little over 15 miles per hour and is known as an agile fighter, able to maneuver quickly and shift position deftly in combat.

The mongoose thrives on his agility, using this to quickly dodge and strike when fighting snakes. He can also run faster, although not by as much as you might think considering the size difference, topping at around 20 MPH.

This is one of the mongoose’s greatest strengths and due to his smaller size he is more maneuverable than the honey badger, but since his opponent is also a rather speedy critter, this is not as large an advantage as one may expect.

Size and speed aside, the weapons these warriors bring to the table can make a major difference in who comes out the victor. Let’s see what these two mustelids are featuring in the ring.

The honey badger’s greatest strength may lie in his legendary endurance and his incredibly thick hide. Even African porcupines (three times larger than their North American cousins) rarely can penetrate his thick skin with their quills and as mentioned previously, bees are no threat at all. It takes a lot for claws or teeth to get through to anything that can cause appreciable damage to this sturdy creature.

While the mongoose is also known for having a thick hide, it pales in comparison to our honey badger. Also featuring claws and sharp teeth, the mongoose relies on his agility and cleverness to use them to maximum effectiveness, often “faking out” his opponent with a feint, and then coming in from an unexpected angle.

He is also adept at protecting his spine by curling on his back, using his teeth and claws to great effect from underneath his opponent, which allows him to strike at a soft underbelly and keep an opponent from debilitating him easily.

He also has stink glands, but they are used mostly for marking scents and are not as powerful as those of the honey badger.

A smart foe can find ways to win a battle against overwhelming odds. Let’s see how these two competitors rank in this category.

As usual, we will begin with our honey badger, who demonstrates a fairly high intelligence by being able to solve problems and use tools, such as using rocks to build a ladder and devising methods to escape entrapment that show they make great use of their large brains.

The mongoose is also considered fairly intelligent, using rocks to break eggs as well as other skills they learn from each other and can learn simple tricks.

That being said, the honey badger, perhaps unexpectedly, wins this category.

Neither species is particularly aggressive towards humans, preferring instead to keep to their own devices. In fact, they are very similar in a lot of ways when it comes to fighting in self-defense.

First, the honey badger typically hunts by hiding behind environmental cover and launching itself out at prey, but is also well-known to block off the burrows of small animals, trapping them so it can finish them off at its leisure.

Mongooses hunt insects by scent and dig for some of the creatures they eat, although they can quite boldly attack a snake, relying on their speed to tire out their opponent and relying on their thick hide and venom resistance to protect them. They crack the snake’s skull with their teeth once they dart in for the kill.

Things get interesting when either of these two goes are startled by predators, especially larger opponents or extreme numbers.

Neither is willing to back down and will face off against seemingly insurmountable odds. Their tenacity is certainly a huge advantage in combat as is their resilience.

The badger in particular is known as a dirty fighter, willing to strike below the belt, quite literally savaging his opponent’s genitalia to cause it to bleed out while using his extreme endurance to allow an opponent to tire itself out either so it can eventually get away or declare victory.

Each of these two breeds have been known to take on four to six lions on their own and sometimes manage to escape or chase off these mighty predators. That’s some ferocity!

While the badger may actually be more aggressive in this case, they’re so similar and fearless that we are going with a tie here.

The honey badger’s body is made to resist nearly any assault, but he does have a weakness: his own gluttony. If given the opportunity, he will gorge himself until he can barely even walk. If caught at one of these moments, he will not be able to make use of his agility and an opponent will have an opportunity to break through his powerful hide.

Due to his size, the mongoose’s greatest weakness is his bite and claw attacks, as he may have difficulty breaking through to cause damage if his opponent has a strong hide or armoring.

As this battle is unlikely to take place when a badger is gorged, we will give this one to him.

The battle has begun. Now that we know everything pertinent about these two fierce warriors, who is most likely to come out on top?

In a one-on-one battle such as this, the mongoose faces several disadvantages. For one, he likes to fight with others, and in this scenario, he is lacking the help of his colony. Four mongoose have reportedly been able to drive off a honey badger, and considering that this is only a single mongoose, that does not bode well for our sleek snake-killer.

Another disadvantage is, of course, the size advantage of the honey badger, which is nearly triple his weight.

Even if he manages to outmaneuver the badger, that thick hide is going to resist a lot of the damage and his opponent is not going to tire out since that is one of his greatest strengths.

Unless the mongoose stumbles upon a helpfully, overly stuffed honey badger, the odds are strongly in favor of the ferocious and mean badger.