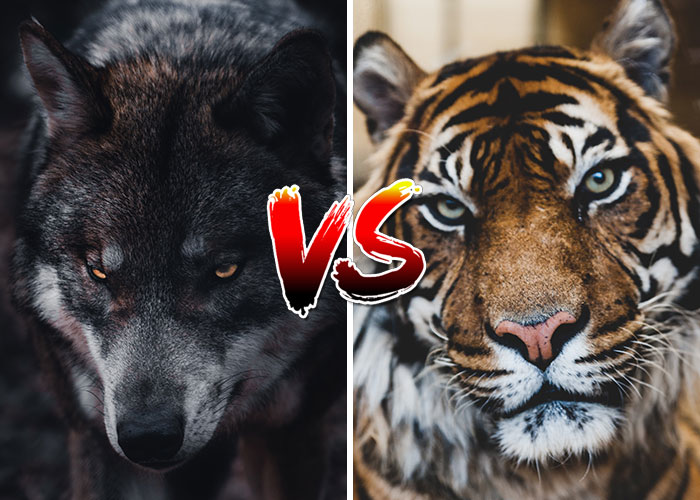 Two great predators worshiped by adults and children alike for their deadly prowess, the wolf and the tiger are mammals known for being top-tier predators. The lion may be king of the jungle, but the tiger is king of the rainforest and the wolf is king of the woodlands. If you pitted these two kings against each other, who would win?

It’s important to consider all possible candidates. There are technically only two species of wolf recognized by most scientists: the gray wolf and the red wolf; though there are other species who potentially fall into the category (others debate whether or not they’re jackals).

Meanwhile, there are six distinct species of tigers. Our analysis take the stats of each species of these creatures into consideration and evaluate the two creatures as a whole of all their species.

The smallest wolves in the world live in desserts across the Middle East and top out around a mere 30 lbs. North American gray wolves, however, can weigh anywhere from 55 to a whopping 130 lbs. They also stand between 26-32 inches tall. Depending on its gender and species, a wolf can measure 4.5 ft to 6.5 ft long.

At over twice the size, tigers average 220 to 660 lbs. Even the heaviest wolf is still a full 5x smaller than the heaviest tiger. Tigers are also almost twice a big length-wise: they grow from 6 to 10 ft long. Even if a wolf was faced with a small tiger, it would still be greatly outweighed by the feline. 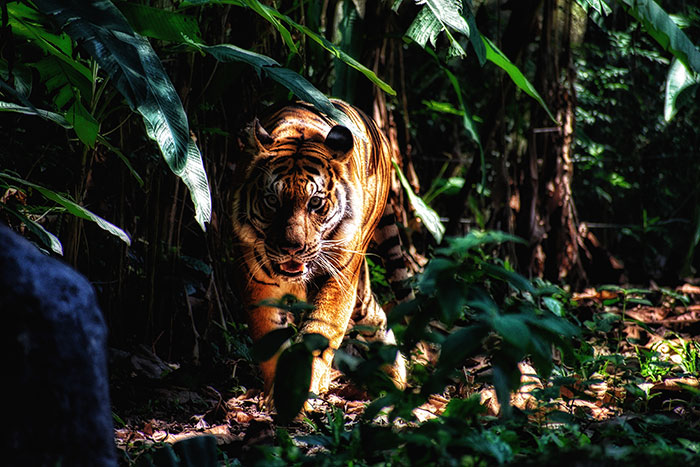 Wolves know how to effectively use their energy. They average a trot of 5 mph which allows them to cover long distances. When they are tracking prey they can burst up to between 36 and 38 mph. They can’t maintain this speed for very long, though, at risk of losing their stamina.

Unlike other cats, tigers aren’t limited to land. They’re proven swimmers, giving them an edge on two fronts – not that a battle of wolf v. tiger would take place in a river, but it certainly wouldn’t hinder the king of the rainforest!

They’re also skilled jumpers. As their hind legs are longer than their front, they’re able to spring forward over 30 ft in one leap.

They can also jump vertically, presenting a threat to prey attempting to hide up in trees. When they’re on the run chasing prey, tigers max out at 40 mph. Like wolves, they can not keep up this pace for very long.

As expect in carnivorous canines, the best weapons in a wolf’s arsenal are its teeth. Wolves boast 42 pearly whites. Their canines can measure as long as 2.5 inches – perfect for gripping prey and puncturing their skin. The carnaissial teeth towards the back of their mouth act like scissors to tear flesh. All these dental assets combined give wolves a biting power of 398 psi, allowing them to break a fully grown moose’s femur bone in one try.

Meanwhile, tigers’ canine teeth measure longer – nearing four inches in length. They only have 30 of them, but paired with their signature sandpaper cat tongues which can strip off fur and feathers – even meat from bone! – tigers’ teeth are useful on the offensive.

In addition to their teeth, tigers have another weapon in their arsenal: the tell-tale claws. On house cats, these retractable tools usually give us a light scratch, sometimes drawing blood. The full four inches of a tiger’s claws can be deadly. They’re curved, allowing the big cat to hold on to its prey once it’s sunk its claws in.

The high intelligence level of the wolf is proven through their self-enforced social hierarchy. As a group, they determine the social standing of each member of the pack and work in a community for the betterment of the group.

Researchers studying packs of wolves noted many specific, routine behaviors that enforce wolves’ self-awareness, such as nose bumps that signify submission or a request for forgiveness from a higher-ranking member of the pack. This awareness, mixed with keen physical hunting skills, is formidable.

While it has been proven that tigers have the biggest brain out of the big cats, other studies have confirmed that lions outperform their feline family members in tests of intelligence.

Tigers aren’t completely witless, though, as they spend most of their lives in solitude, hunting and fending for themselves completely alone.

They know to plan ahead, making a kill and then hiding their prey from other predators or even from scavengers and go back to the carcass for snacks rather than hunting another prey. This forethought shows strong reasoning powers that could be reflected in its methods of fighting another predator. 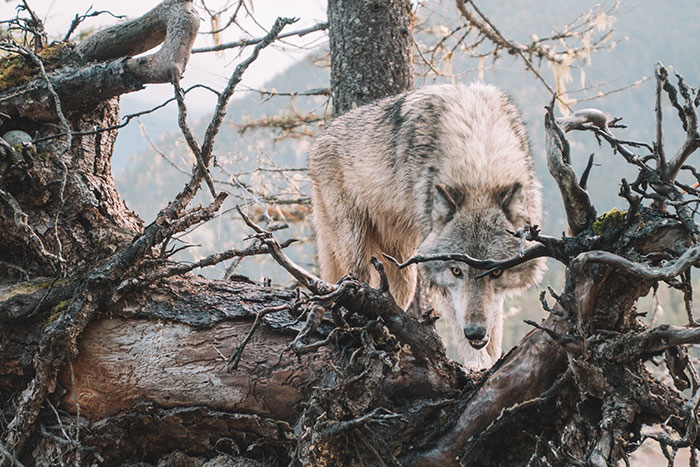 Everyone knows that wolves hunt in packs. All packs are made up of family members. They tend to include seven or eight relatives. Wolf packs are supreme in their habitat, meaning that there is no other animal that hunts them, a.k.a apex predators: the top of their food chain.

In addition, they are known to have an instinct to kill. There are many recorded instances of “surplus killing,” when wolves kill prey in an advantageous situation even if they’re not hungry. Some might say this gives them a vicious advantage.

Contrary to the wolf, the tiger is a lone hunter. Relying on their senses of sight and sound, they stalk their prey until they’re able to take it down. Then, they grip tightly with their jaws to suffocate the animal or hold on until it bleeds out. They don’t have the same reputation for killing unnecessarily like wolves do, but many stories that illicit the nickname of “man-eater” do surround the king of the rainforest.

As tigers are very territorial, their instinct to protect their hunting grounds from another predator would likely kick in when faced with a wolf.

They would be significantly weakened by having to go head-to-head.

While a tiger’s iconic coloring is actually a highly effective protection against its natural prey who are colorblind to the vibrant stripes, it would not be as effective against other animals nor in other settings without tall grass to hide behind. This is the only conceivable weakness in a fight against a wolf.

It’s true that they’re not the best tree climbers, unlike their feline family members, but they’re not too bad and it’s very unlikely a wolf would get up a tree any better.

A recap of the stats before delivering our final verdict …

While a wolf would put up a valiant effort, the numbers are against it. The sheer size of a tiger, never mind its speed and jumping power, would guarantee its success in this fight.

Throw in the teeth and claws and there’s no question. The wolf would be at an immediate disadvantage. Plus, pitting it one-on-one against a tiger, taking away its pack support system, would further cripple it.

A tiger would without a doubt win in a fight against a wolf.