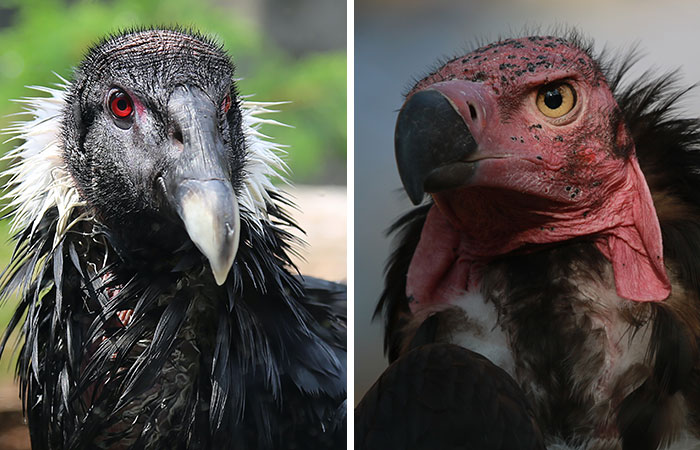 In the ornithological world vultures internationally are divided into two different groups: Old World, encompassing Africa, Asia and Europe; and New World, encompassing the Americas (As of the publishing of this article, this is the preferred zoological nomenclature, and it is therefore used throughout).

This division is because they aren’t related even a little bit.

One of the most fascinating things about New and Old World vultures is that they are an example of convergent evolution; they evolved separately, from separate genetic ancestors, to fulfill similar ecological niches completely independent of one another.

In the Venn diagram of Old and New World vultures, the space they overlap is small.

They all scavenge, though they find their carcasses differently.

They’ve all evolved highly-acidic stomachs to tolerate rotting and diseased carrion. Many have large wingspans (the better to soar with), and featherless faces (the better to eat rotting carcasses with, according to one theory).

And each evolved to fill a vital part of the ecological web, breaking down and consuming what might otherwise rot and contaminate the surrounding area. 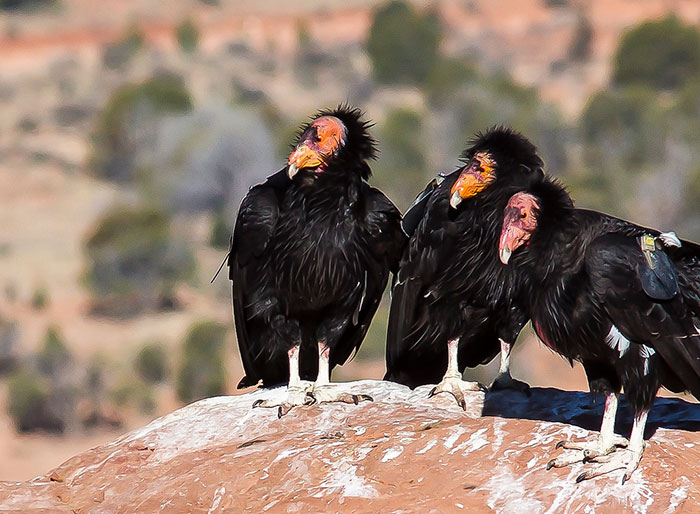 North America plays host to the black vulture (Coragyps atratus), spanning from the Northeastern United States all the way south to as far as Peru, Chile and Uruguay; the turkey vulture (Cathartes aura) who calls the skies from southern Canada to the southern-most tip of South America home; and the California condor (Gymnogyps californianus), whose range has unfortunately shrunk to a region encompassing the southwestern US and northern Mexico.

In South and Central America are king vultures (Sarcoramphus papa) from northern Argentina to southern Mexico; the greater yellow-headed vulture or forest vulture (Cathartes melambrotus) inhabiting South America’s lowland tropical forests; the lesser yellow-headed vulture or savannah vulture (Cathartes burrovianus) from Mexico spanning throughout South America; and the Andean condor (Vultur gryphus), soaring the breadth of the Andes Mountain range and the adjacent coast from the bottom tip of Tierra del Fuego in the south, to Venezuela and Colombia in the north.

Where their territories overlap, these New World vultures often interact over a meal.

Turkey vultures and black vultures in particular don’t have beaks that are ideal for tearing into a carcass, and have been observed benefitting from larger species, such as the Andean or California condors and king vultures, taking their share first.

A turkey vulture can smell a carcass more than a mile away and has a notably large olfactory lobe for its size. While not all New World vultures share this olfactory superpower, others benefit from it.

Other species of vulture are frequently spotted following turkey vultures in particular, but also greater and lesser yellow-headed vultures and each other in pursuit of a meal. Notable among these followers are California condors and king vultures, who often bully first-on-the-scene, smaller vultures.

Andean condors and California condors are the only two species of condor in the world. There are no Old World condors.

The Andean and California condor have the distinction of being the largest flying land birds of the Western Hemisphere. Andean condors are second only to the wandering albatross in wingspan, at 3.5 meters or 11 feet 6 inches. 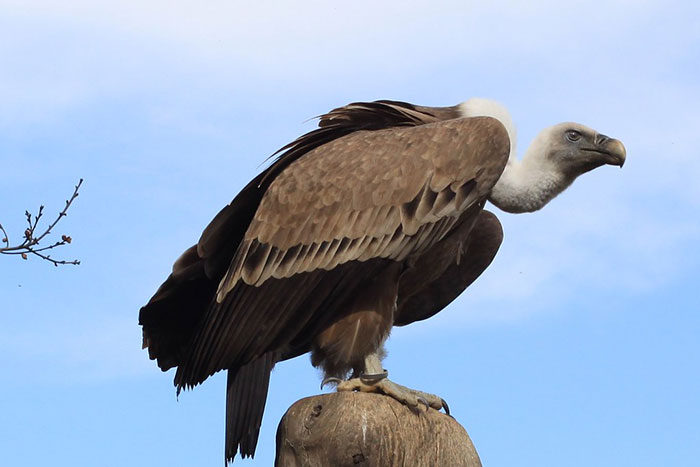 There are many species of Old World vulture, varied and disparate as the regions they call home. All species of vulture in the Eastern hemisphere locate their meals by sight, not smell. Old World vultures’ talons are stronger, more capable of gripping their finds like their hawk and eagle kin.

This difference also makes them clumsier on land than their not-remotely-related “kin” to the west. From here, there are only differences between the various species of Old World vulture.

The bearded vulture, or lammergeier (Gypaetus barbatus) lives in mountains from the Alps and Pyrenees in the west, to the Himalayas in the east, to as far south as South Africa.

The black around their eyes flows into a “beard” of sorts, giving them their name.

They’re unique in having feathered faces, but also in their diet, even among scavengers, in that they subsist mostly on bone (with a stomach pH of 1 or less).

They live largely in the crags and crevices of their mountain ranges, though bearded vultures in Ethiopia have adapted to subsist on the refuse of human settlements.

The griffon vulture or Eurasian griffon (Gyps fulvus) spans the Eurasian continent from Portugal all the way east to Israel, then India and the slopes of the Greater Caucasus Mountains.

They often move in flocks, roost and feed together. The species is threatened if not extinct at several points throughout their former range, due mostly to poisoned livestock.

The Cape vulture or Cape griffon (Gyps coprotheres) is found mainly in South Africa, Botswana, Lesotho, and parts of Namibia.

It’s among the largest raptors in Africa (next to the lappet-faced vulture) with a wingspan of between 7 feet 5 inches (2.26 meters) and 8 feet 6 inches (2.6 meters).

Cape vultures and other African species of vulture are threatened in part by a unique foe: poachers.

On June 20, 2019 more than 500 vultures were found poisoned near three elephant carcasses in Botswana.

It’s speculated that the vultures were targeted because they alert anti-poaching authorities to a corpse.

The white-backed vulture nests in the trees of the Savannah and counts the elephant who comes for its tree among its nemeses.

The Himalayan vulture or Himalayan griffon vulture (Gyps himalayensis) builds nests of sticks on the cliff ledges of the Himalayas and Tibetan Plateau. Red-headed vultures (Sarcogyps calvus) — of Disney’s Jungle Book and Robinhood fame — are critically endangered, inspiring efforts to protect any of their nests spotted in the high tree limbs they favor throughout the Indian subcontinent.

This barely scratches the surface of the variety of Old World vulture species. It would take a book to discuss each species, their nuances of behavior, their distinct threats and their habitats.

Many species of Old and New World vulture and storks engage in a basking pose, called a horaltic pose, holding their wings toward or away from the sun while seated.

This iconic pose is theorized to either be a grooming behavior, or to dry the wings in preparation for flight. Or both.

The turkey vulture, when threatened, will sometimes vomit its highly-acidic last meal at the intruder. They can launch this bio-weapon up to 10 feet.

The idea that vultures worldwide subsist strictly on the already-dead is a misconception.

Many species of Accipitridae and Cathartidae have been observed hunting and killing prey, even smaller species like black and turkey vultures.

New World vultures (and therefore condors) don’t have a voice box. They hiss and grunt. Old World vultures, in keeping with their hawk and eagle kin, can and do cry.

Vultures around the world suffer from another misconception: that they carry disease. However, disease is killed within their digestive systems. New or Old World, every vulture plays a critical role as a part of the world’s natural cleanup crew.