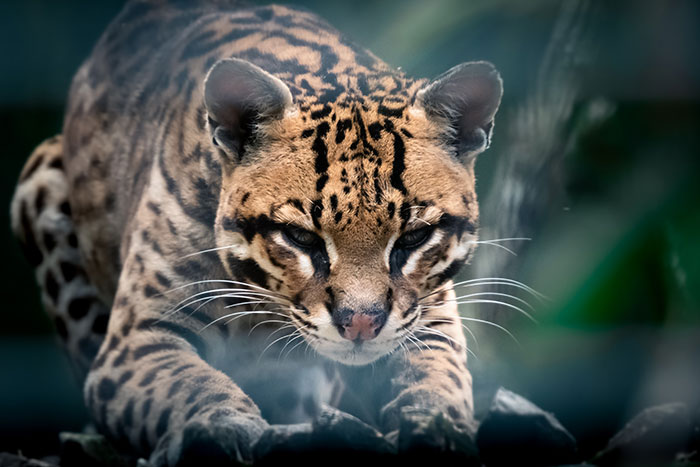 Ocelots look remarkably similar to a house cat, only about twice the size. They can weigh around 34 pounds on the upper end of the average spectrum, and can grow up to approximately 40 inches long (Source).

They tend to feature fur that ranges from orange to white, dappled with black spots which can sometimes resemble links in a chain.

While they look like that may make a fantastic pet, it is important to remember that these are American wild cats and can pose dangers greater than their smaller domestic cousins.

The question is: just how dangerous are ocelots?

The Life of the Ocelot

Well, let’s explore their lifestyle a little bit to learn more about them before we make any determinations. How they live their lives can provide insight into how they behave.

The ocelot enjoys a solitary lifestyle and spends his time lounging in bushes or trees during the day, catching up on his sleep since he is primarily nocturnal by nature.

When night falls, it is time to hunt and he often ranges for miles seeking a good meal, which often consists of rodents, fish, birds, monkeys, and other small prey.

As a carnivore, he is not interested in anything but meat, and he has special teeth designed to tear and scissor pieces into manageable bites. Those teeth can also be put to good use if he feels threatened.

As ambush hunters, he will stalk his prey both on the ground or in trees then go in for the kill, attempting to put an end to the struggle immediately. 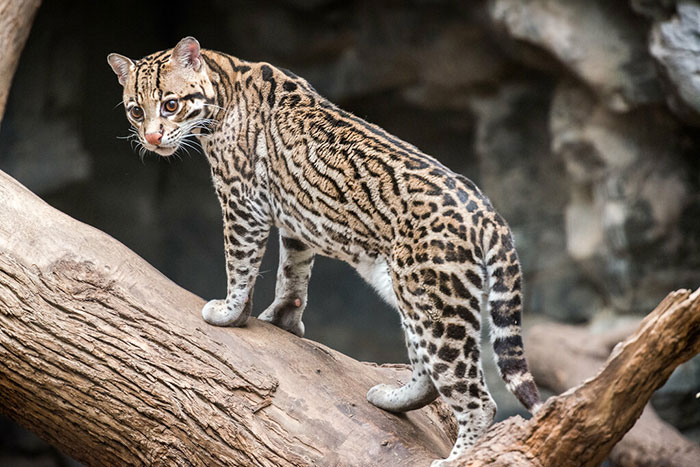 You may think an ocelot is harmless because it seems so similar to the pet cats you may have had in the past, but those animals have been domesticated over thousands of years.

An ocelot is still a wild animal, but is also twice the size of a domestic cat, with enhanced strength and agility while also possessing the ability to leap impressive distances.

They also have a savage bite and their claws can easily ravage flesh, since that is what both are intended to do, of course.

These smaller wild cats have the ability to cause significant wounding very quickly, and have a special tenacity for finding weak spots in foes.

That, coupled with their significant speed means that they can strike multiple times in quick succession.

Not to mention that cat bites by any type of feline, even domestic ones, pose a threat for bacterial infection.

Do Ocelots Ever Attack or Eat Humans?

Like most wild cats, ocelots do not go out of their way to attack humans. They are more interested in avoiding any sort of contact with humans in the first place. Yet, if feeling threatened, like any wild animal, they may feel compelled to attack in order to protect themselves or their young.

While they have the potential to quickly do a serious amount of damage, especially because they fight dirty, targeting sensitive areas such as armpits, the neck or throat, and the groin area. While they are strong, due to their size, it is unlikely that they can or will kill an adult human.

They have no desire to eat human meat so generally have no reason to want to attack, although if the animal is starving: meat is meat.

Keep in mind that rabies can cause any type of feline to be more likely to attack people or children unprovoked, so it’s always worth being cautious if you see one of them.

Have Ocelots Ever Taken or Harmed Children?

There have been reports of ocelot attacks on children. The smaller the child, the closer in size they are to the ocelot, and the more damage that the cat’s claws and teeth can do.

You should always keep your children away from ocelots because there will always be danger lurking with these wild animals. They could cause significant injury to children (or anyone, really) even when just trying to play because they are so powerful and their teeth and claws are so sharp.

And again, bites from cats can result in potentially life threatening situations, so remember the old adage: better safe than sorry. These animals may look like a sweet little kitty ripe for petting, but . . . don’t.

How To Protect Yourself When an Ocelot Attacks

The problem with ocelot attacks is that these cats are so fast and intuitive about attacking where it can cause the most damage.

They react so quickly that they can quickly launch multiple bites, and even if you manage to deflect the cat, they have incredible reflexes and can bounce right back onto you almost immediately.

So what do you do?

Remember that you are larger than an ocelot, and the more intimidating you are, the more likely it will decide that you are not worth the risk. An ocelot can run nearly 40 miles per hour, so running will more than likely just reinforce the idea that you are prey. Wave your arms over your head and make noises to try to dissuade him from an assault.

Ocelots are masters of hitting weak spots, so avoid giving them easy access to your neck, armpits, or groin areas. Also make sure to protect your eyes! Remember that while it is unlikely that an ocelot can kill you, they can cause significant damage, and if they get into an artery things could go badly quickly.

Don’t Jerk Away If Bitten

If an ocelot gets his teeth or claws into you, yanking your arm back will cause more damage, slicing into veins and tissues which can make it worse and cause additional bleeding.

You have the size advantage here, use it. Try to cause enough damage to the cat that he decides it is in his best interest to leave off and flee rather than pursue a battle with you any longer. Just because you are fighting doesn’t mean that you can’t call or shout for help if there is anyone around. If others arrive, the odds swing in your favor, and the wild cat will probably disengage and run away.

The animal can’t flee if the opportunity arises when he has nowhere to go. Make sure to offer him every opportunity to back out, so that you can put an end to the conflict with as little as possible harm done to either of you.

Don’t forget, if you suffer scratches or especially bites from an ocelot, seek medical treatment for bacterial infections.

Have There Been Any Reported Deaths From Ocelot Attacks?

While there are no confirmed deaths at the hands of ocelots, there have been reports of serious damage caused to adults when an ocelot has managed to get an artery or several blood vessels.

That means that even though it is unlikely, death at the hands of these mid-sized cats is still a real possibility, so take an attack by one of these felines seriously.

Although beautiful creatures, remember that wild animals are best viewed from afar, either in a zoo or through your television screen.

Do not endanger yourself or children by attempting to pet or engage with an ocelot, as you never know what may provoke the cat to attack.

Are Eagles Dangerous To Humans? 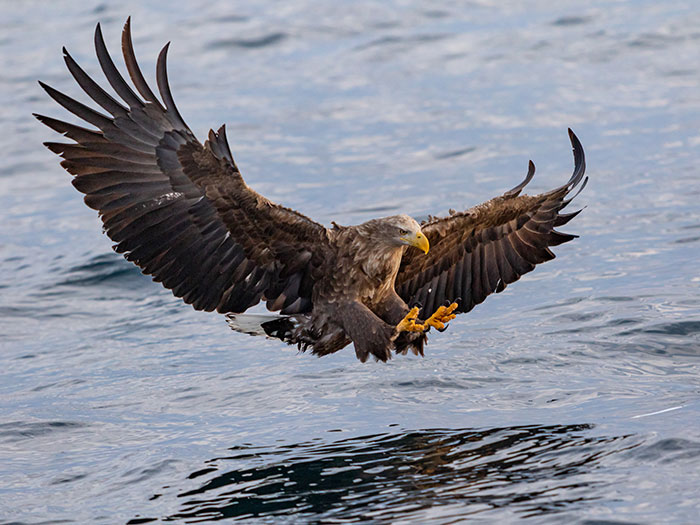 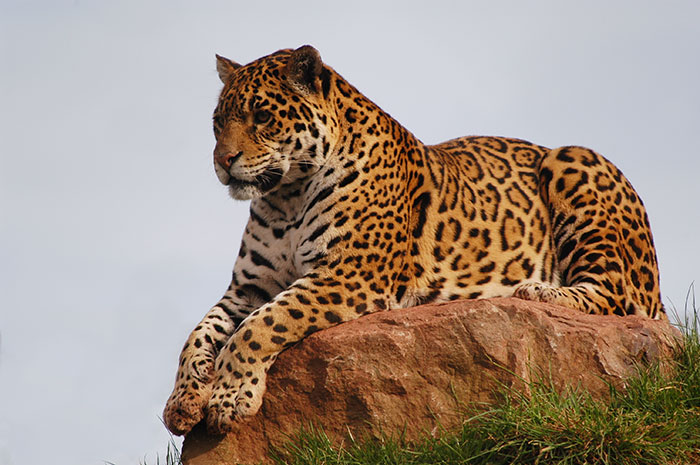 Are Lynx Dangerous To Humans? Everything You Need To Know 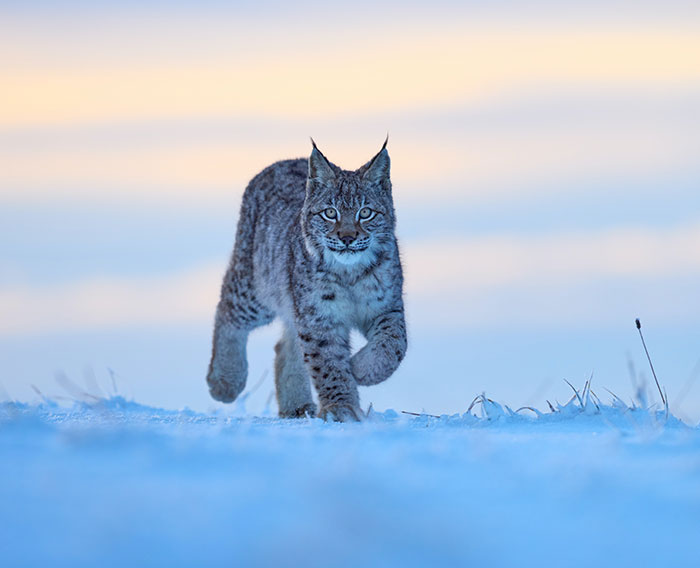