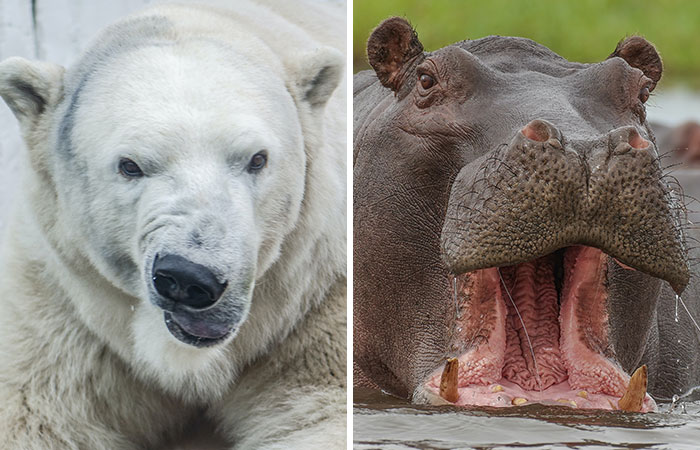 Considering animal battles, especially if they are two completely different creatures who never or rarely interact, can be a whole lot of fun. Especially when the animals are titanic, powerful beasts.

Two such beasts are the powerful polar bear and the stocky hippopotamus, two immense creatures with the potential to do a lot of damage to an opponent.

So, even though these two animals live in completely different environments, if they were to run into each other and engage in a battle of epic proportions: who would win?

Engaging in a detailed analysis of each animal’s lifestyles, size, speed, weight, and other relevant categories can make it easier to determine just what would happen if these two met each other as foes in a winner-takes-all battle to the death.

Each of these powerful contenders comes from completely different environments and lifestyles, so let’s take a look at their lifestyles to determine if anything there can have an impact on the fight. 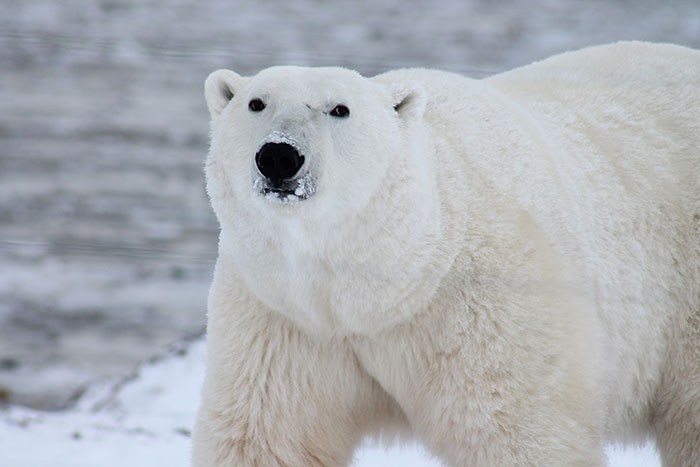 Large, beautiful four-legged predators, Polar bears are the largest species of bears and they enjoy living in some of the coldest climates.

They keep to themselves, avoiding even other polar bears except when the time comes to mate, and spend a lot of their time seeking calories in the frigid environs they call home.

This typically involves pursuing seals along the ice in the Arctic circle, the blubber of which provides significant energy to the bears, which is handy when meals are sparse. Other than seals, they may feed on birds, fish, and small mammals.

As all of their food sources live in the water, they become frustrated when the ice melts and must return inland until the next freeze.

Perhaps a surprising fact about polar bears is that, despite their luxurious white coat, their skin is actually black. 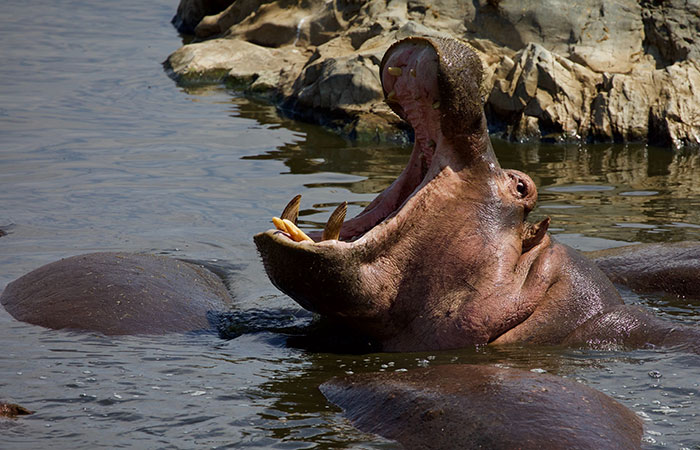 Basking in water in Africa, Hippos also spend a lot of time basking on the shore, enjoying the heat of the sun. Since their eyes, ears, and nostrils are located high on their head, this is often all you can see floating above the water as these massive beasts keep an eye on their surroundings.

Hippos tend to form collectives of over 100 in some pools during the dry season and they seem to get along fairly well.

Most conflicts tend to take place over mating when a lesser male indicates a desire to mate in a territory dominated by a larger male.

Often, this situation is resolved with a yawning display of sharp incisors, bluffs, and a lot of noise, but if that is not enough, they put those sharp teeth to good use.

Battles among hippos can result in death, but combat is the only purpose for the incisors as the hippos are herbivores and get their energy from mowing the grass.

They use their lips to grip the grass and then jerk it out of the earth with their head and into their mouths.

They eat a lot of grass, so much that in their larger numbers, they face food deprivation and there have even been reports of Hippos eating carrion or even other hippos, despite their herbivore nature.

Despite this, they only eat a small percentage of food compared to their body weight, as their stomachs process the grass slowly and they make the energy go further by spending much of their time buoyant in the water and resting.

It is hard to discount the advantage that comes with the larger opponent, especially if that happens to be an exponential difference. Let’s see where our two combatants stack up against one another.

Taking a look at the polar bear, the adult males usually fall between 700 pounds to over 1300 pounds. That’s a lot of muscular, powerful polar bear to contend with.

He can even rise above his upper-scale height of 5 feet to a staggering ten feet tall when he stands on his hind legs, which can certainly intimidate an opponent.

But will the hippo be worried?

Our hippo stands at an equitable height (although he can’t stand on his hind legs), but our stocky, large-headed, small-tailed mammal plods in just under 10,000 pounds (for the largest specimens)! Even females can weigh over 3,000 pounds.

This weight is spread out over nearly seventeen feet of short-legged heft. In other words: no, the hippo is not particularly impressed.

Agility can mean the difference between life and death in combat, especially when the faster creature is overmatched while running speed can determine whether an opponent could escape or catch a foe who tries to escape.

Over short distances, polar bears can run a respectable 25 miles per hour, and they maneuver well, making use of all four of their legs. However, they are known to overheat quickly, so fatigue is a real concern.

Yet, up against a beast that can weigh 10,000 pounds, he will surely have the advantage here. Anything else would be unfair, right?

That means that if the smaller polar bear tried to flee, the oversized hippopotamus could catch him!

While it is likely that the polar bear can maneuver better than a hippo, the larger mammals even demonstrate a surprising prowess for climbing when necessary, so overall, we are awarding this category to the hippo.

With a bite that can easily snap an animal’s spine and crush skulls, the polar bear’s jaw strength PSI is approximately 1200, which is more powerful than even a lion.

Don’t underestimate his claws, either; they were designed to rend flesh and are more than adequate for the task. The swing itself generates pretty intense power, ten times stronger than a human.

Hippos can open their mouths up to 180 degrees and can bite for a mighty 1800 PSI. Don’t forget that they also have those sharp incisors, which can reach 1.2 feet in length!

The hippo is also known to take serious advantage of both his speed and bulk in a murderous trample, which has resulted in a serious amount of death in his history.

As the most intelligent member of the bear species, with a great ability to learn from his experiences and to solve problems, the polar bear can be very clever. He will need to make use of his ability to think around corners his extreme patience if he wants to overcome his disadvantages in this fight. Fortunately, he learns from his opponents and is able to adapt accordingly.

His large opponent is “all brawn and no brains”, which can actually serve as an advantage in some cases, as a hippo can be very unpredictable. It will be tough for the smart polar bear to determine any patterns or methods of attack from the hippo because there probably won’t be any.

Nonetheless — polar bear gets this one.

With an astonishing ability to smell, polar bears can detect seal breathing holes up to twenty miles away.

However, they have to spend a considerable amount of time waiting outside those holes for a small chance to trick and catch a seal when it comes up to breathe.

They may fare as poorly as a success rate less than 5%, especially because their window of opportunity is so small.

When a seal surfaces, they lash out with their teeth, snagging hold and dragging their prey onto land before savagely chomping its head several times until it is dead. Then it dines on the skin and fat and, finally, the meat.

They have great swimming endurance and can swim for the better part of a day without tiring, which is contrary to their land overheating problems.

They can swim over 6 miles per hour and spend a lot of time engaging in this leisure activity when not hunting.

While polar bears are typically cautious in encounters and are not territorial, the hippopotamus can be very aggressive.

Even though they are herbivores, a hippo is more than happy to engage in combat with a fellow hippo that refuses to stand down and there are far more recorded hippo attacks on humans than from polar bears.

However, the hippo does not hunt for a living like the polar bear, so he wins this one, too.

Neither have much in the way of solid disadvantages.

The polar bear can overheat quickly on land, so that is an advantage that the high endurance of the hippo could overcome.

The greatest disadvantage that the polar bear can take advantage of is that, despite spending so much time in the water, the hippo does not actually swim. It floats, buoyantly rafting along.

As the polar bear is a fantastic swimmer, if he can outsmart the low intellect hippo and engage in the water, he could turn a battle around quickly.

The only way the polar bear wins this one is more than likely if he manages to get the hippo into the water.

The hippo loses its maneuverability and the enhanced agility of the polar bear will give it a chance to find and strike multiple times, most likely with his sharp teeth because the skin of a hippo is two inches thick.

Since the polar bear’s claws are only slightly longer than that, he isn’t going to be able to score deep, effective gashes.

This is why if the battle takes place on land, the polar bear may get a few good bites in, but the hippo will have no problem sinking his teeth into the polar bear’s thick hide and doing a devastating amount of damage.

There are just too many advantages in important categories for the hippo. He is our champion!

Polar Bear vs. Grizzly Bear: Who Would Win in a Fight? 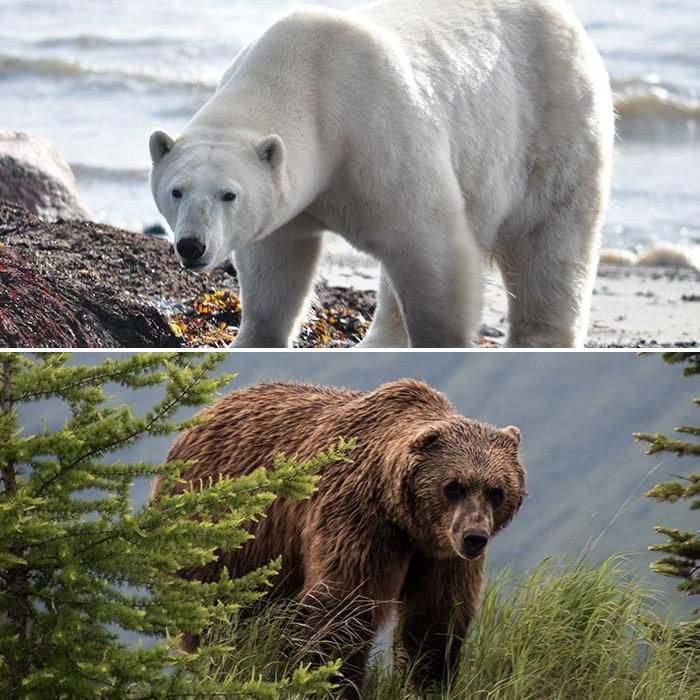 Rhino vs Hippo: Who Would Win In A Fight? 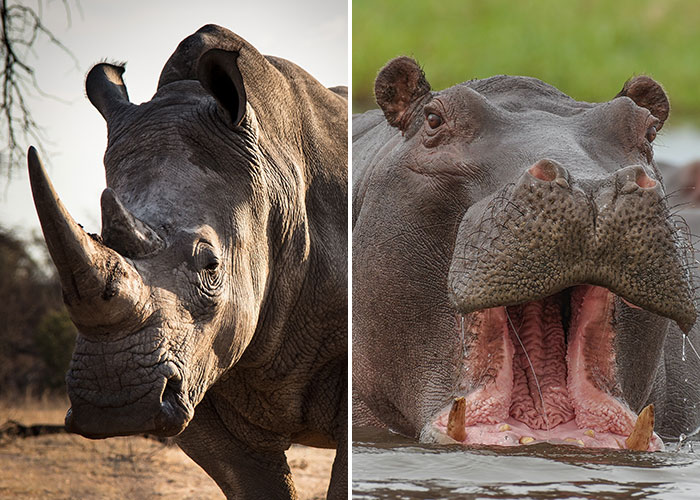 Polar Bear Vs. Gorilla: Who Would Win in a Fight? 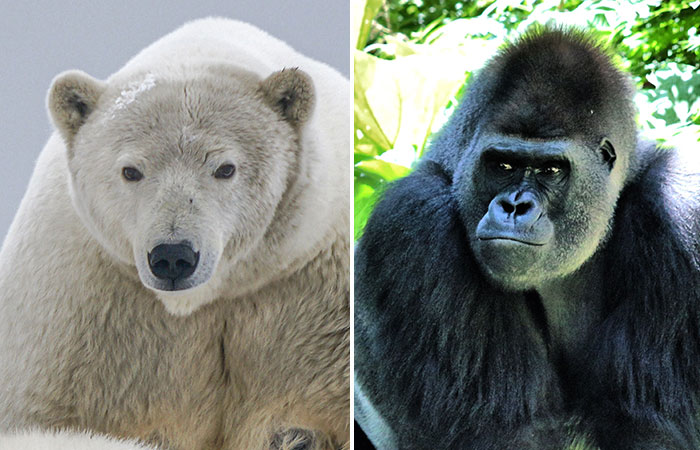