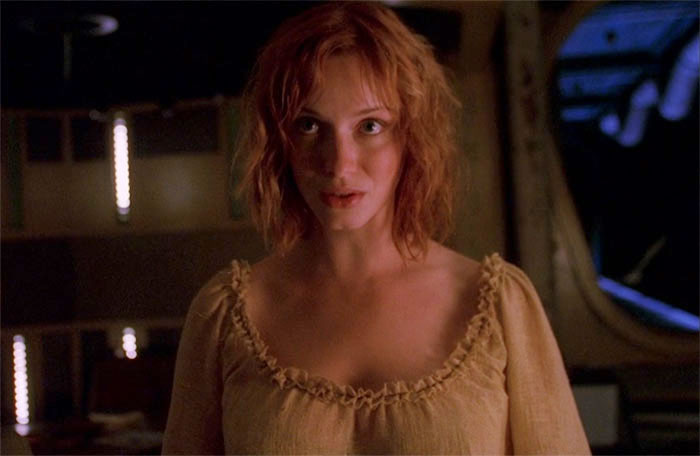 Christina Renee Hendricks is an American actress best known for playing Joan Holloway on the immensely popular and critically-acclaimed series Mad Men. She is also known for playing Saffron on the cult-classic show Firefly and Beth Boland in the NBC series Good Girls.

Christina Renee Hendricks was born on May 3, 1975 in Knoxville, Tennessee. Her mother was an American psychologist, and her English father worked for the Forest Service.

When Hendricks was nine her family moved to Twin Falls, Idaho. At ten years old, Hendricks began coloring her natural blonde hair to red. She was inspired to do so by the book Anne of Green Gables.

As a teenager, she and her family moved from Idaho to Virginia where Hendricks attended Fairfax High School. 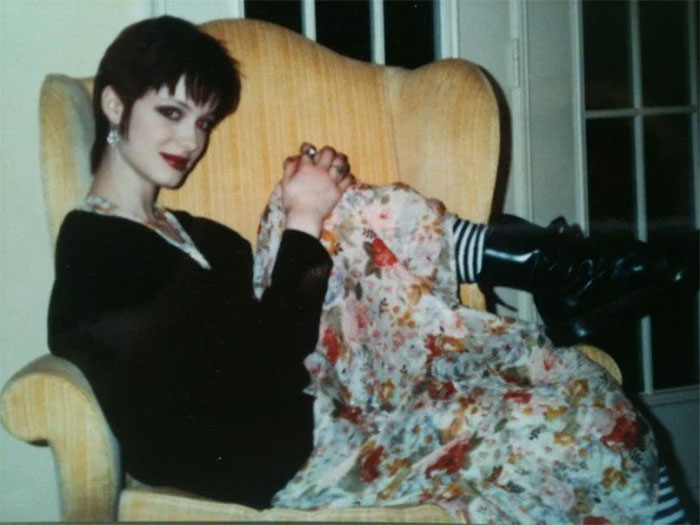 Hendricks would later describe that period of her life as her “goth” phase. She felt like an outcast in her new school and was the subject of bullying.

Christina says her motivation to get in the goth scene was to differentiate herself from the kids that were cruel or mean to her.

She left Fairfax High School during her senior year and attended community college. She continued to study theater and ballet.

At nine years old, Hendricks appeared in Grease marking her first appearance in a theater production.

After she completed her studies, Hendricks entered a modeling competition to appear on the cover of Seventeen Magazine. This ultimately led to her signing with IMG Models and moving to New York City when she was eighteen. 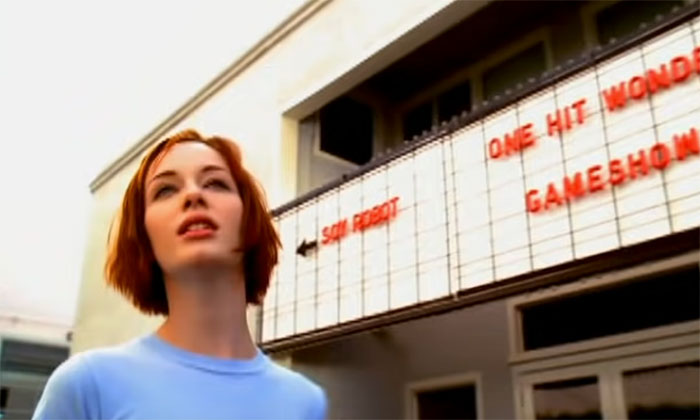 She continued to model from age eighteen to twenty-seven. She was featured in commercials for Carl’s Jr. and Dr. Pepper, appeared in Everclear’s music video for “One Hit Wonder,” and did print work. 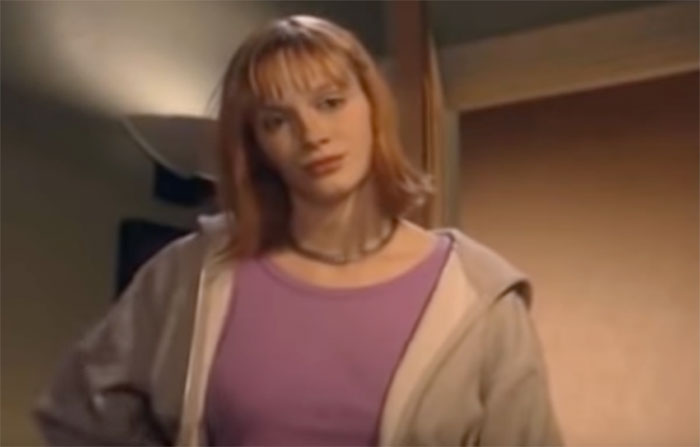 Hendricks made her television debut on MTV’s anthology series Undressed in 1999. Hendricks played Rhiannon in Season 1 but did not return for the remaining seasons.

The show was nominated for and won a GLAAD Media Award for Outstanding Daily Drama.

In 2002, Hendricks landed a recurring role on the multi award-winning and critically-acclaimed series ER. She played the character Joyce Westlake. 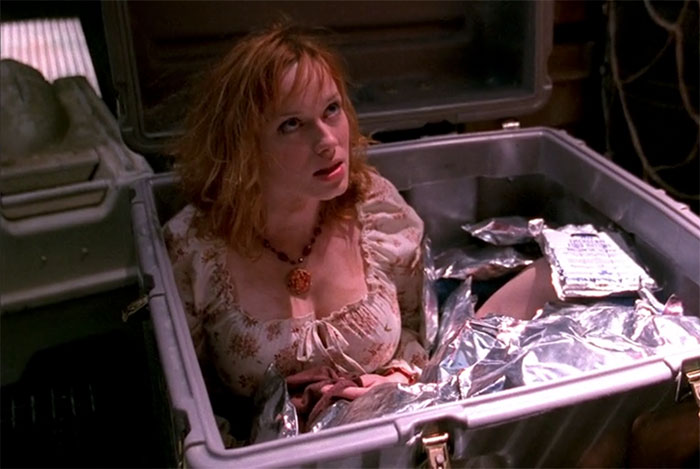 At twenty-seven years old, Hendricks scored a recurring role on the television series Firefly, which ran from 2002 to 2003 for one season before being canceled by Fox.

Hendricks played a character named Saffron, a con artist whose true name goes unknown. Her first appearance was on the episode entitled “Our Mrs. Reynolds” as Mal’s acquired wife. She later returns in the episode “Trash.”

During her time on the show, her character is known by three different aliases: Yolanda, Saffron, and Bridget. As Saffron, she was known for marrying her marks to complete her scams. 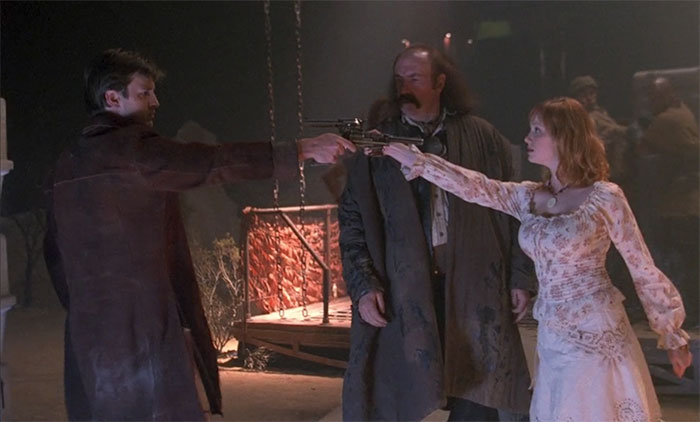 One of her marriages was to Mal’s smuggler friend, Monty, and the other was to Durran Heymer, the wealthy owner of Lassiter antique. She refers to Durran as her “real husband” and he is the only one she appears to display genuine feelings for.

Saffron is suspected of being mentally unstable as she goes from using her feminine charms when caught to expressing aggression and contempt for her victims.

Fans of the show expressed overwhelming praise for Hendrick’s portrayal of Saffron. However, Saffron did not reprise her role in the sequel film Serenity.

What did Christina Hendricks do after Firefly?

Hendricks was cast as Nicolette Ray in the drama Kevin Hill. The show ran from 2004 to 2005 and starred Taye Diggs, who struggles to find a balance between his career and his lovelife. 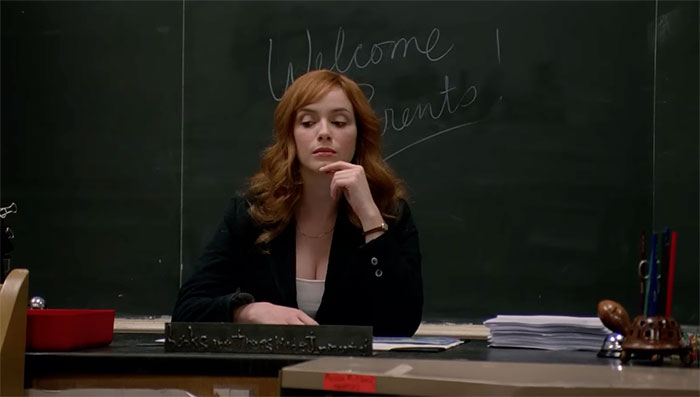 In 2011, Hendricks was cast as Sarah, a teacher, in the American film Detachment. The movie centers around the lives of students and teachers shown through the eyes of a substitute teacher.

Also in 2011, Hendricks starred as Blanche in the film Drive alongside Ryan Gosling, Carey Mulligan, and Oscar Isaac. The movie was about a Hollywood stuntman that also works as a getaway driver for criminals.

Drive received an approval rating of 93% on Rotten Tomatoes with an average rating of 8.3/10. 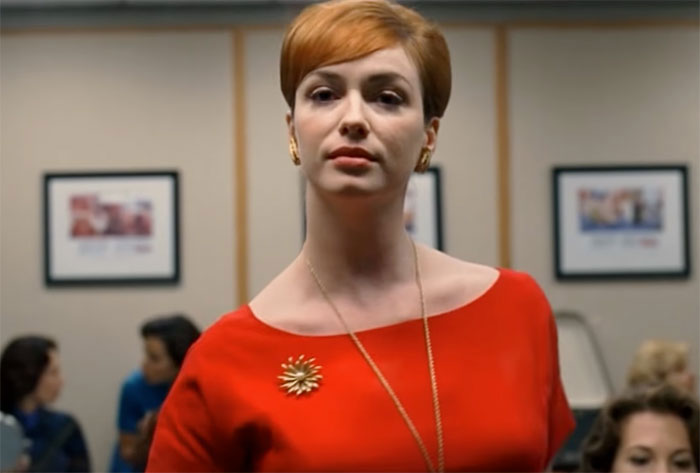 In perhaps her best-known role, Hendricks played Joan Holloway on the AMC period drama Mad Men. Her character was the office manager and head of secretarial pool at the fictional advertising agency Sterling Cooper. Joan is a confident, charming realist with meticulous organizational skills.

Hendricks portrayed Joan for the full duration of the show’s run between 2007 to 2015. Despite receiving praise from critics and receiving six Emmy nominations, Hendricks found that people were mainly focused on her bra size. In 2021, she expressed her displeasure and frustration in People Magazine about the comments made about her body–

“There certainly was a time when we were very critically-acclaimed and getting a lot of attention for your very good work and our very hard work, and everyone just wanted to ask me about my bra again.” 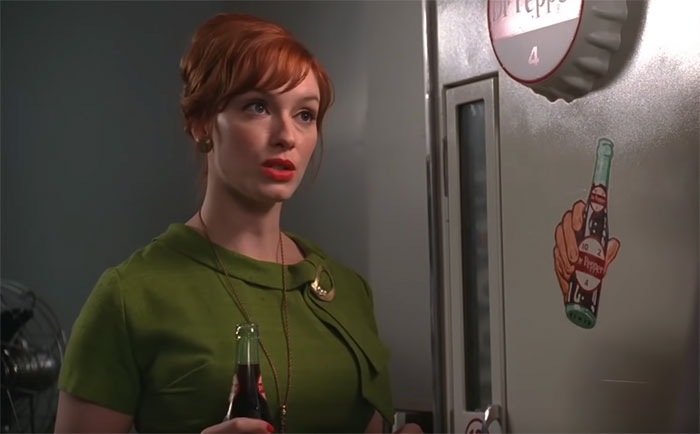 Despite the sometimes unpleasant and inappropriate focus on Hendrick’s figure, she has come to love how she looks.

“If there is anything to be learned it’s that I’m learning to celebrate what I was born with, even though it’s sometimes been inconvenient.”

After Mad Men concluded, Hendricks starred in the Comedy Central series Another Period between 2015 and 2016. She played a prostitute named Celine living in the early 20th century. 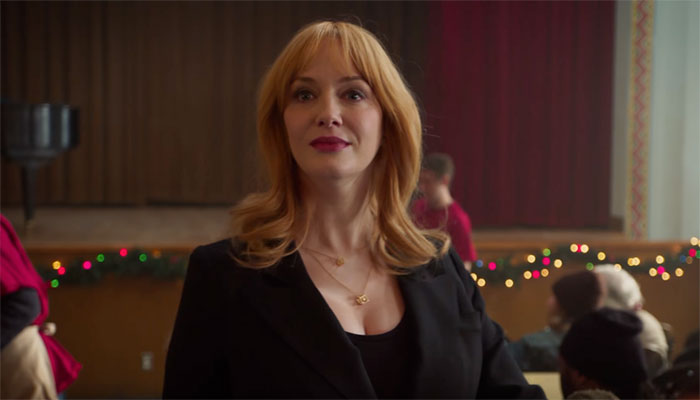 In 2017, Christina played Ms. Monet, a drama teacher in the comedy Fist Fight. The film is about a teacher, played by Charlie Day, who causes another teacher, Ice Cube, to get fired and is subsequently challenged to a fist fight after school.

The film received an average rating of 4.10/10 on Rotten Tomatoes and finished 5th in the box office for its opening weekend. 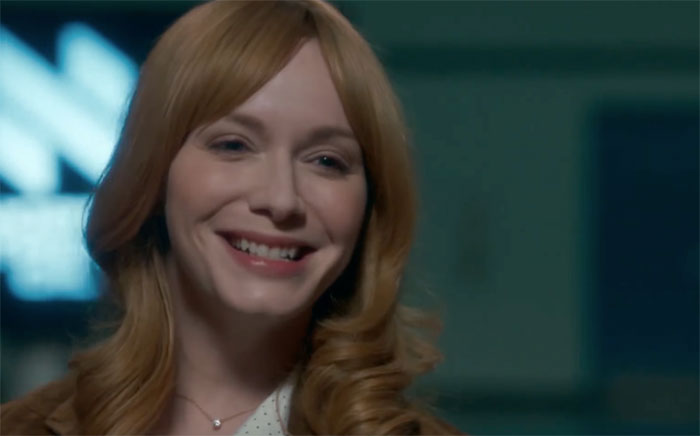 Tin Star was a British television crime drama that ran from 2017 to 2020. The series is about a former London police officer who then becomes the chief of police in a town in Canada.

Hendricks starred as Elizabeth Bradshaw in the first and second season of the show.

What Is Christina Hendricks doing now? 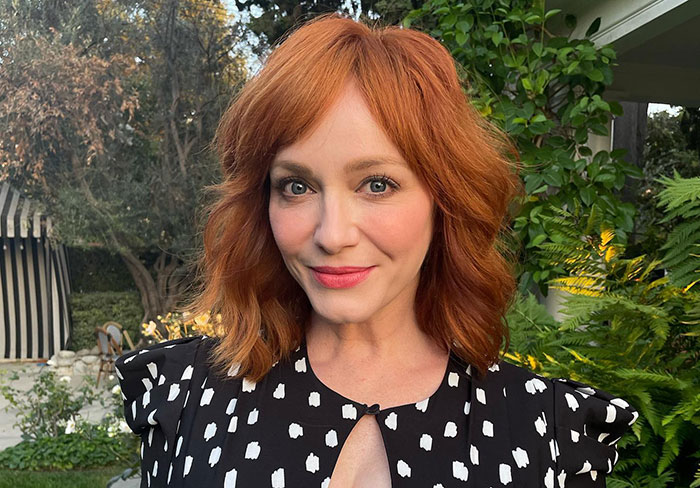 Christina is still busy acting and has starred and produced several projects. She starred as one of the three leading actresses in the NBC crime drama Good Girls, which aired from 2018 to 2021 before its cancellation. She was also a producer on the series.

On Good Girls, she played Beth Boland, a woman who robs a grocery store along with her sister and friend, in order to gain financial stability. The series was panned for its less-than-believable plot but praised for the strong performances from its lead actresses.

In 2022, Hendricks lent her voice to the adult animated series Solar Opposites on Hulu. The show centers around a family of aliens who crash land on Earth and are forced to remain there. Hendricks voiced the character Cherie, a Benihana chef. Solar Opposites was the most watched program on Hulu following its debut.

The Storied Life of A.J. Firky

Based on the NY Times best-selling book, The Storied Life of A.J. Firky is about a bookstore owner, A.J., who is struggling to cope with his wife’s death. Hendricks produced the film and plays Ismay in the movie. The film is set to premiere in theaters on October 7, 2022. 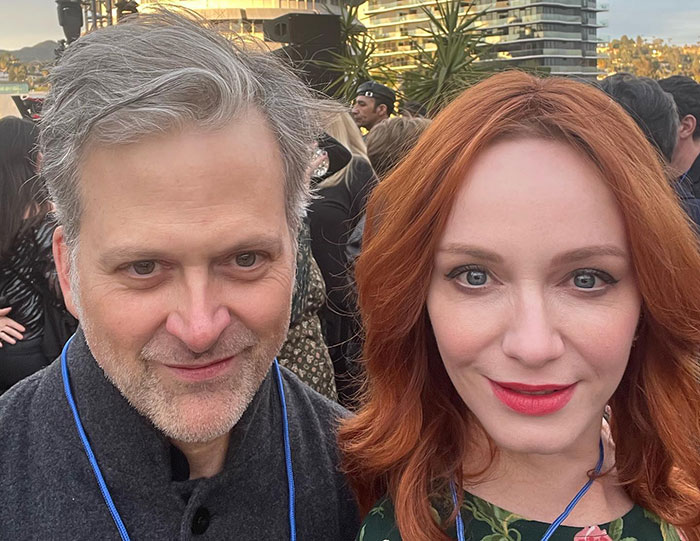 Hendricks married fellow actor, Geoffrey Arned, in October 2009. In December 2019, they finalized their divorce. They do not have children together.

In 2021, it appeared that Hendricks was dating a Good Girls camera operator named George Bianchini. 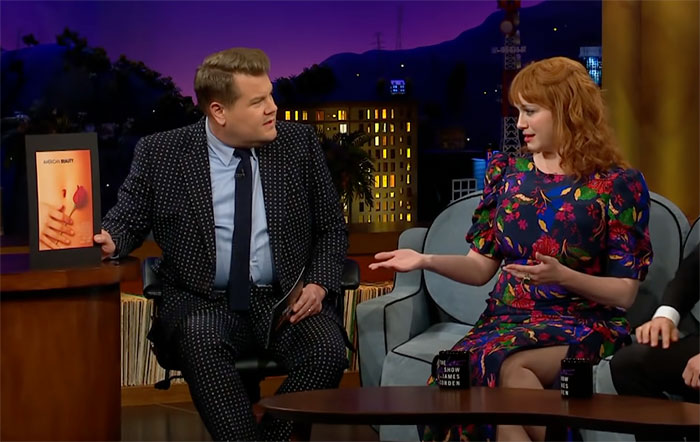 Hendricks was the hand model for the poster for the film American Beauty. Christina says in an interview that on the poster it is her hand and another model’s stomach.

She says at the time she had no idea what the movie was and was just excited to land a job.