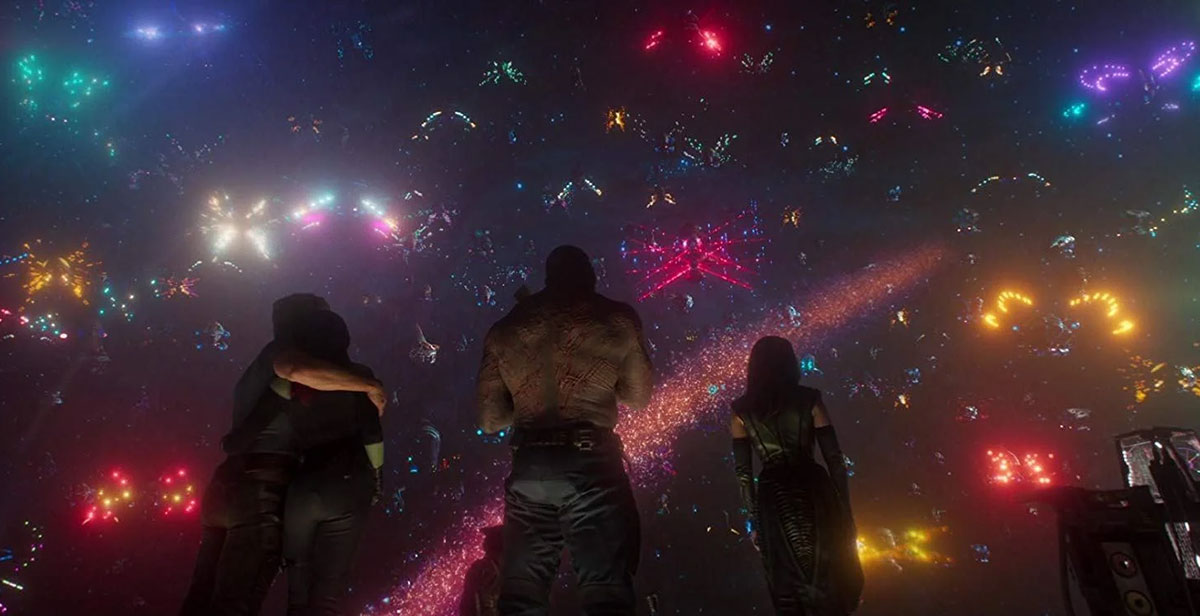 Marvel isn’t really where you would consider cinematic art to pop up, but it has moments where films go out of the way to truly make something memorable. That doesn’t just mean the look of it though, but the entire feeling the scene gives. True cinematic art is when you can feel what’s happening on screen just as the characters do.

This is going to technically be all Marvel films, but let’s be honest not many hold up as well in hindsight, so a majority will be from the MCU, particularly later when Marvel started letting their directors and writers find solid footing with characters.

The moment that truly endeared Groot to everyone. Saving the rest of the guardians by covering them with his branches at the expense of his life. The heartbreaking part though is Rocket’s realization of what Groot is doing and his pleading not to, only for Groot to give this line and show everyone what being a team is about.

Guardians of the Galaxy had so much to deliver on when released, taking an at the time D-list team and testing the waters of the MCU for space adventures. It delivered on every front though, and this scene was just sealing the deal.

I’ve heard people audibly sobbing as the credits roll during three movies. One of those is later down the list, and the other was Les Miserables which wasn’t just the credits but the entire goddamn movie. That said, holy hell is it rare to pull the kind of impact Avengers: Infinity War had on audiences.

We’ve just seen a majority of our heroes fade to dust in front of their friends. Everything is not going well. Then Avengers: Infinity War rips everything apart by having Peter Parker dissolve in Tony Stark’s arms.

Holy shit. I don’t think I heard a theater be that quiet during Marvel credits. Usually, everyone chatters about this or that or theories on what might happens next until the credit scenes roll through. This one though was absolute silence only broken by emotional sobbing. Then the only credit scene was more pain. 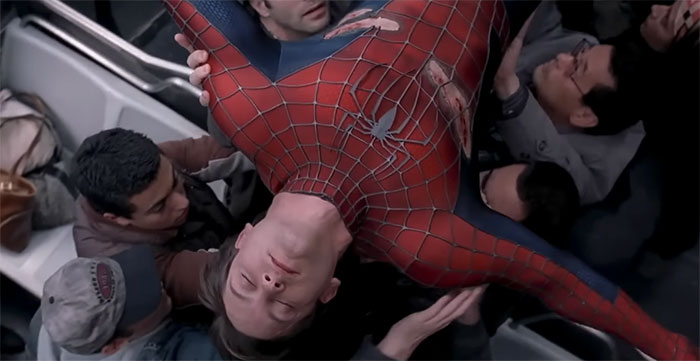 Spider-Man 2 is the perfect sequel. Dealing with Peter’s guilt over killing Norman Osborne, Doc Ock’s tragic origin, and this little cinematic masterpiece of a scene. After Spidey gets beaten down by Doc Ock and stops an entire f*cking train by himself while everyone inside finds out who he is, he’s not up and at ‘em for another go.

Then the train passengers pass him forward and give his mask back while reassuring him they won’t tell. This whole time he’s dealt with JJJ making him out to be a menace, yet this is pure Spider-man, saving people no matter what they think of him.

“He’s just a kid” is pretty funny though since Tobey Maguire was born a 45-year-old man. 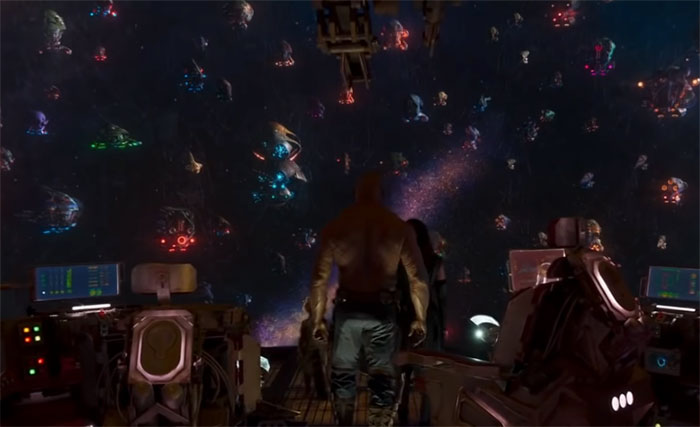 The Guardians of the Galaxy movies already got the Groot moment in the first film, but it was Yondu’s Ravager funeral that stands out in the second movie. After sacrificing himself for Quill right after saving his life.

Yondu wasn’t a character anyone would expect to get a bright sendoff as he did, with various ravager ships showing up to launch off explosives into space, but it really did capture the essence of the character being flashy but explosive. 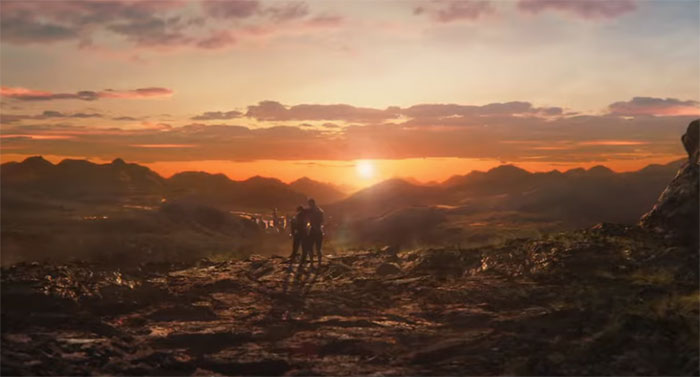 Killmonger sits among royalty as an MCU villain. Doesn’t hurt that he came around the time they started making more sympathetic antagonists in the films, and his message was timely both at Black Panther’s release and still today.

T’Challa fatally wounds Killmonger, causing him to stop fighting and just watch the sunset with his cousin. Powerful dialogue and acting by the leads and amazing cinematography by Ryan Coogler make this not only the best scene of the movie but one of the best in Chadwick Boseman’s career. 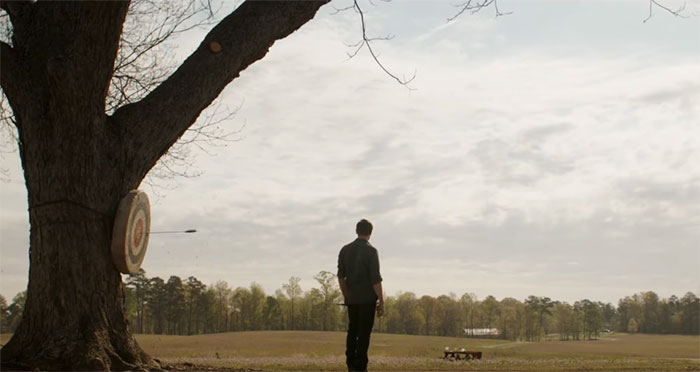 While Infinity War left audiences emotionally traumatized by the end, Endgame just gets that right out of the way before the real movie even starts.

Clint Barton is enjoying a great cookout with his family, all is well and fun, and he’s on house arrest but not dealing with superhero bullshit… nevermind, there goes his entire family. This is fine, everything is fine.

This is just shot with so much tension and ominous dread. We know what’s about to happen but these characters don’t, and everything ends in disaster for Clint. 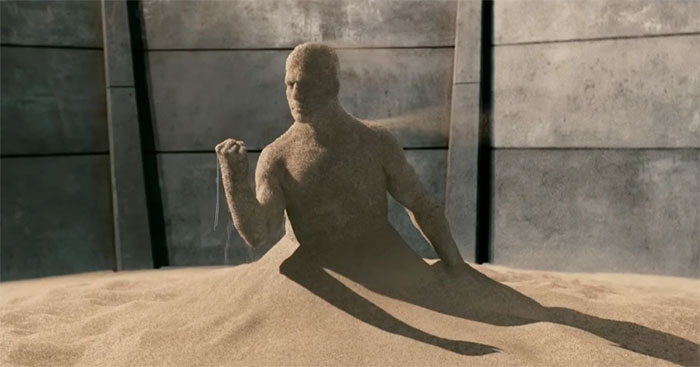 Spider-Man 3 was intended to be Raimi’s opus of the trilogy. It would have been too, but unfortunately, producers wanted Venom in the sequel and required Raimi to shoehorn the character in among the already crowded Sandman and Goblin duo. 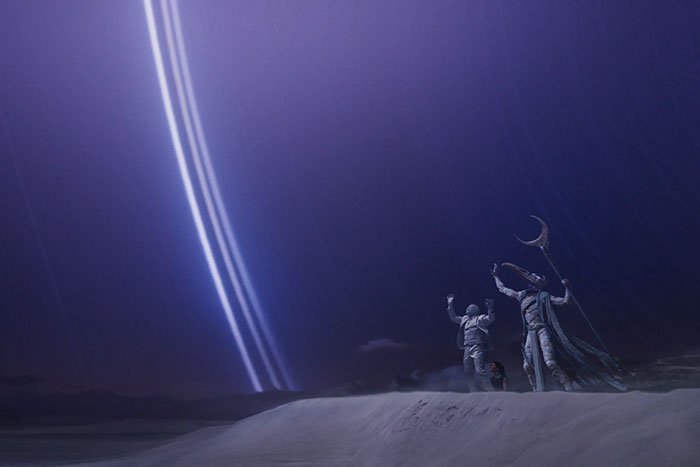 Phase 4 hasn’t shied away from the weirder side of the MCU, delivering on multiple pantheons of gods, monsters, and meta-humor. Moon Knight though gave a very special scene at a climactic point in the series that truly established it.

When trying to decipher a clue about where to go next, Khonshu reveals the ability to turn back the night skies, being the god of the moon and all, and does so to reverse it far into the past at the risk of his own safety. Just watching the sky change is aw-inducing, but it’s the performance of everyone that truly sells it.

Father of the Year 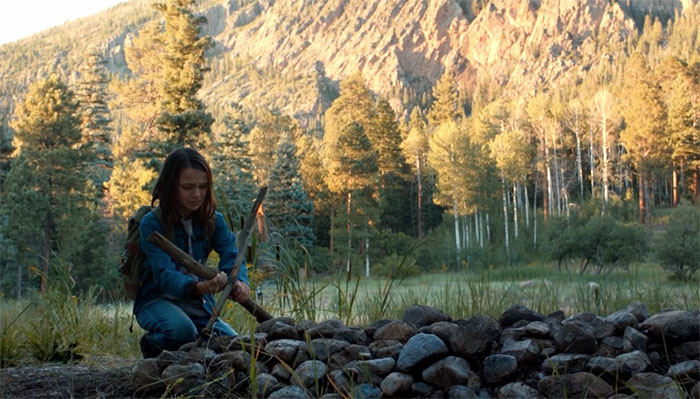 Remember that other movie I mentioned a while back, that had people audibly sobbing their sorrows out during the credits? That was Logan. The final scene of Laura turning Logan’s gravemarker over absolutely wrecked everyone watching, but it’s the scene of Logan telling Laura how much she means that truly broke audiences.

All this time Logan has refused to acknowledge her as his daughter, only to do it as he’s dying from wounds he sustained while protecting her. Wolverine, who’s had everyone he’s ever loved die in his arms, is now dying in the arms of the person he loves most.

It was me. I was the one sobbing. Very, very loud.

Seriously though if you can watch the end of Logan and still go argue about superhero films not being art, you might want to re-evaluate some things. Sure, they may not always have the deepest plot and not everything always lands how it should, but everyone involved is making their own personal art every day to make these films happen. That deserves something, doesn’t it?