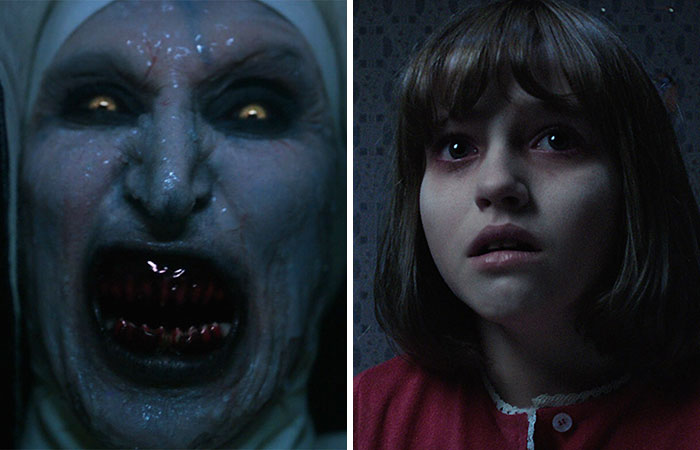 Every genre has cliches, there’s no way around them at this point. Not many genres have enough stupid cliches that will immediately turn viewers off as horror does, though.

The worst part is that cliches multiply over time, only growing as society moves on and new ideas become old and tired. Even though some of these can be played with and used well, how they’re used is a very early sign of if a movie will be good, terrible, or cult status.

These cliches have killed more movies than any slasher combined, so if you see one, remember- run away. Don’t try to fight it, don’t think “Well, it can’t be that bad” because that’s how you end up in a packed theater watching The Lazarus Effect. Heed my warning, or fall to the curse yourself.

Look, if a kid suddenly starts acting creepy, staring at their parents in bed, torturing animals and the parents DON’T get the kid checked out, then everything that follows is karma. The creepy kid cliche is at the point where writers and filmmakers are deconstructing it now, subverting the entire cliche itself in some cases. Some of the parents are even worse though, being so impossibly thick they don’t believe their precious little one is going to pull a We Need To Talk About Kevin move over forty minutes into the movie.

Bonus points for the creepy child also being pale and sickly or having some debilitating disease. Then it becomes a guessing game of “is the kid possessed or are they about to die?”

Either way, movies need to dial back on creepy kids. The cliche kind of peaked in Orphan anyway, then completely reprogrammed in Hereditary.

2. At Least They Died Doing What They Loved… Each Other.

Heaven forbid anyone gets laid around here without being brutally murdered by a madman or supernatural monstrosity. Slashers are usually the ones to blame, with Freddy, Jason, Michael, and almost any others having a direct alert when anyone steps into Poundtown.

It’s at the point where any time a character starts hinting towards banging with someone else, it’s best to assume they’re gonna die doing it.

The cliche was so proficient, it got deconstructed in It Follows and Teeth, both metaphorically and physically.

Find a teen slasher where obvious signs of a monster or killer are all around but the adult is the most unperceptive being in existence. It’s not possible. There does not exist such a thing. It is the most leaned-upon cliche in the slasher genre and it’s working wild over-time.

From the principal in Scream to any adult outside the Losers Club in It, this has been done to a brutal, bloody death.

“Mom! I’m covered in blood and my friend got stabbed in front of me!”

“Oh, you silly goose. Time to run up to bed so you can be up for school tomorrow!”

Hopefully, as generations change this cliche changes, but that’s probably asking way too much.

Some films can utilize good jump scares, either pulling off a bait and switch or just leading up to a false one. They really can be done well if there’s thought given to them. The first Insidious did it well, usually not using the jump scare on the audience’s behalf so much as putting it toward the story. Sinister may have the best one though in the infamous lawnmower scene. Sinister’s final scene though… not so much.

If there’s any kind of warning, sign, announcement, or anything that is some indication of the slightest danger, stay the hell away. It’s not hard to do, just don’t go there. It’s probably out of the way anyway and has a 100% death rate. Don’t do it.

Even worse if the person who initiates the whole thing has to reiterate at one or multiple points about how not dangerous the place or thing is. It doesn’t matter what happened or is happening there, there’s always going to be one dumbass who just has to make it not a big deal.

Oh, that place got nuked out of existence two weeks ago? Nah, let’s check it out! The abandoned mine where all those miners died? Not a big deal. The old mill where hundreds died in a massive fire but it got rebuilt anyway before being closed down years later? Totally up to OSHA standards and perfectly safe. Oops, never mind, everyone’s dead now. Bonus points if this character was a reason for it all like The Descent.

“Let’s split up, gang!” is the dumbest possible idea in any horror scenario. It’s understandable if a group gets split due to some extenuating circumstance outside their control, but inexcusable to voluntarily do that these days.

Cabin In The Woods called it out, but it did the same with other cliches as well. The worst offenders were in the mid-2000s though with slashers especially leading the way.

Yes, the economy is tough right now. Yes, the real estate market is a train barreling toward disaster, so you just have to take what you get sometimes. Even if the last six families to live here were brutally slaughtered or some brutal act of violence or villainy happened, it’s still a place to live.

Part of the issue with the cliche is how quick the turnaround can be. Rental properties might have a quick turnaround, but just how quickly some of the houses get flipped is the real evil at work.

Then there are the people who just won’t budge even under the worst of circumstances. Yeah, the place has blood pouring out the faucets every so often, and occasionally the cat gets thrown through the air by something invisible, but it’s $500 a month in Brooklyn so nobody’s going to give that up.

It’s come a long way from the days of Poltergeist, and now even Barbarian poked fun at it with massive effect.

This one is just infuriating at this point. Countless zombie movies have done it, so many films with transmissible curses or infections have that one character who pulls the ultimate dick move and ruins the party for everyone.

Cliches don’t have to be bad, they just have to be used right. Some filmmakers have taken the oldest cliches possible and spun them so hard they fall. There’s still endless inventiveness to the genre, like the above Barbarian and other cult-classics like You’re Next or Return of the Living Dead still inspiring new ones.