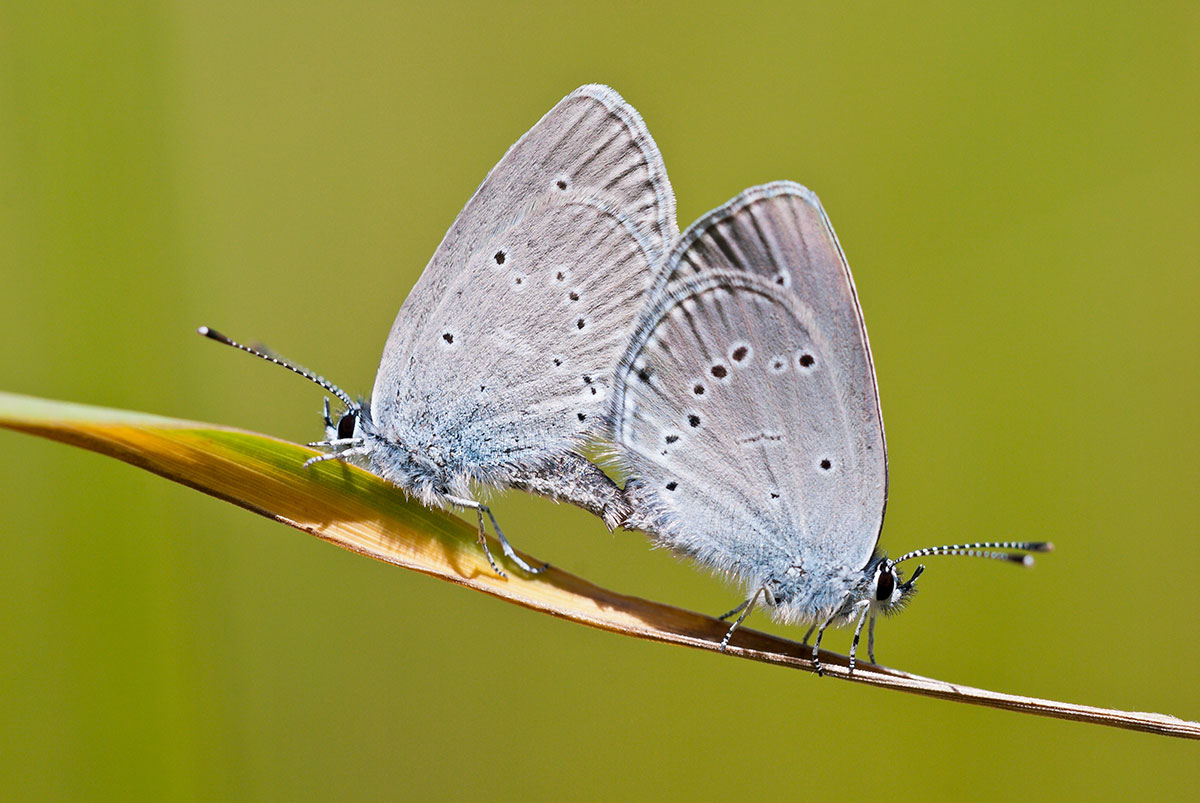 Butterflies often indicate the beginning of spring and summer and are a welcomed pollinator throughout the world. While beautiful, the butterfly has one sole mission in its short life – reproduction. Below you’ll discover more about how butterflies find a partner and reproduce.

How Do Butterflies Find a Mate?

Butterflies use unique techniques to find a mate. Males will usually initiate the search and hunt for females by sensing pheromones – a type of hormone chemical. Sometimes this chemical can be so strong that a male can sense a female butterfly up to 10 miles away. Because numerous males can smell these hormones at once, they will fight each other for the opportunity to gain the female’s attention.

Males will also use their sight to spot ultraviolet patterns on a female’s wings so they can tell whether or not she is part of their species. These patterns can only be seen by butterflies who can even spot them during cloudy days. Females will also take notice of a male’s wing colors to see whether or not he would be suitable to mate with.
Once he finds a potential partner the male butterfly will then hang around the female. If she accepts his courtship they will mate.

Do Butterflies Have Courtship Rituals?

This insect will perform a dazzling dance as a way to gain the attention of a possible partner. The male will jump up and start flying around the female while quickly beating his wings. He will then zoom around in circles creating distinct patterns to impress the female. As he does so, he also releases pheromones to try to entice the female.

Another courtship ritual male butterflies have is to appear as colorful as possible to females. This helps females to recognize them as being one of their own and to be impressed by their display of colors.

If the female isn’t interested or has already mated, she will send a clear sign to the potential suitor by spreading her wings as far as she can while lifting up her abdomen. Females can also sense if a male is inbred (thanks to pheromones) and will instantly reject him. This will help to prevent her potential offspring from having genetic defects.

Do Butterflies Have a Mating Season?

Butterflies can mate in almost any season, but they typically do so during the summer. Some butterflies will mate during colder weather, but if the female lays eggs during a cold blast, the eggs will not hatch until the weather is warmer.

What Month Do Butterflies Mate?

The months that butterflies mate will vary but it tends to be around February and March. This is usually when they come out of hibernation or start migrating to warmer areas.
Sometimes cold weather can also prolong the lifespan of a butterfly in case they were unable to mate during their typical mating season.

How Does a Butterfly Mate? How Long Do They Mate For?

Once hatched, a male butterfly can immediately start mating with a female. In fact, sometimes male butterflies will “assist” a female butterfly out of her pupa so they can quickly mate with her.

To mate, both butterflies will attach together at the end of their abdomens. The male will then grab onto the female with special legs known as claspers. After doing so, he will send sperm into the female’s spermatheca which is a type of storage area in her body that contains the eggs and will hold the male’s semen. How long a butterfly mates will vary, but it usually is around one hour. However, sometimes it can last as long as 16 hours.

Do Butterflies Die After They Mate?

How Long is a Butterfly Pregnant? How Do Butterflies Give Birth?

A butterfly is pregnant for three weeks (typically around March and April) and will end up laying around 100 eggs. She will find a host plant to lay them on and then perform a type of self-fertilization where she releases an egg from the spermatheca and has it pass through an area in it where the male’s sperm has been stored. As the egg goes through, it will be fertilized and then released from her body.

How a female lays her eggs will depend on the type of butterfly she is. For instance, some butterflies, like Monarchs, will lay a single egg by itself, while others, such as Swallowtails, will lay them in clusters.

Once the female has laid the eggs it will take around three days for them to hatch. The caterpillars will then munch on surrounding food sources before they create chrysalides where they will then live for the next week before turning into butterflies.

How Do Butterflies Lay Eggs?

Butterflies will make sure to lay their eggs near important food sources for the caterpillars, but not actually on the plant as a way to protect them in case an animal consumes it. You’ll usually find butterfly eggs on top or beneath leaves or on stems.

One way to tell whether or not eggs are from a butterfly is to look at their size. Butterfly eggs are extremely small (1-3 millimeters) and sometimes can’t be seen without the help of a magnifying glass. Most eggs will have pits in them which shows where the egg was fertilized.

Butterfly eggs also vary in their colors and will range from yellow to green. While butterflies will lay their eggs on different types of plants they mainly do so on milkweed, tulip trees, snapdragons, lantanas, and coneflowers.

Butterflies have an intricate reproduction mission that’s designed to help ensure their species lives on forever. While they have a short lifespan, without them, the world would be lacking in many things it has come to treasure.