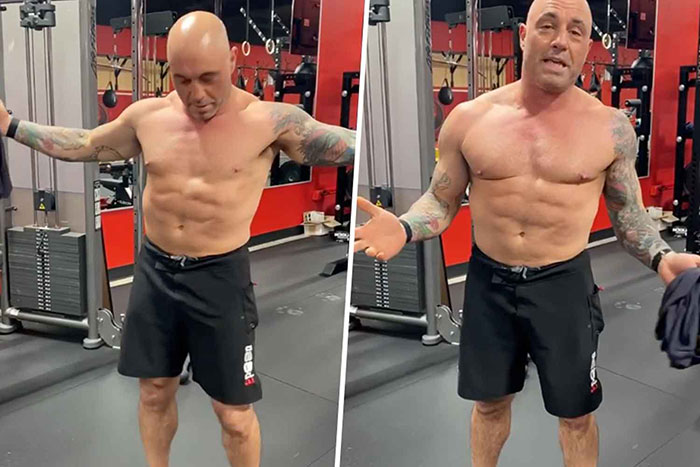 Joseph James Rogan, born on August 11, 1967, in Newark, New Jersey,  is one of the most influential people on Earth. He is a podcaster, comedian, actor, and personality. His podcast, The Joe Rogan Experience, is the most popular in the field, valued at $100 million by Spotify, which acquired it in 2020.

However, Rogan is no stranger to controversy, and his opinions and history regarding physical fitness have gotten him into trouble. He also has been associated with steroids.

Joe Rogan has publicly stated that he takes steroids on his podcast and has never denied taking them. He is very open and honest about his usage of testosterone replacement therapy (TRT), human growth hormone (HGH) and IGF-1. 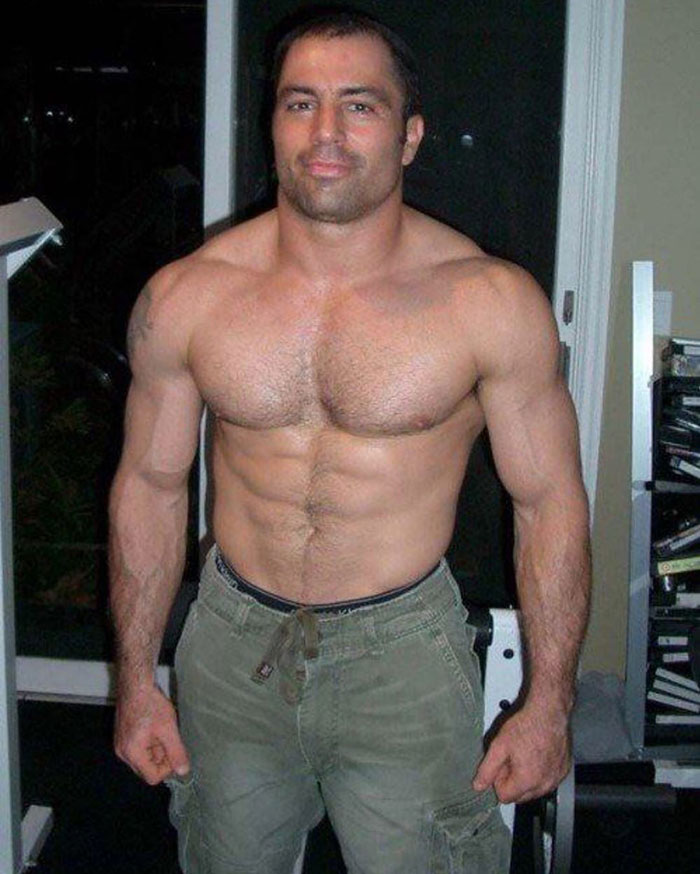 Why does he take TRT?

In episode #1190 of his podcast, Joe Rogan reveals his reasons for using TRT, suggesting that “hormone replacement therapy exists for a reason.” The reason, actually multiple, include making the body feel and work better and avoiding ailments related to aging.

One article about Joe Rogan’s usage of hormone replacement therapy published at Dexerto.com explores these arguments. Specifically, Rogan talks about working with physicians who use the same treatments in their 60s but “look like they’re in their 40s.”

What is TRT? What does it do for men?

Testosterone Replacement Therapy is a form of hormone replacement that is sometimes called androgen replacement therapy. The primary use is treating low testosterone that results from aging or a medical condition. However, it has recently become an en vogue supplemental treatment for some individuals, such as Joe Rogan.

For some users, TRT is cited for enhancing sexual performance, achieving higher energy levels, and helping build muscle mass. Research is not entirely conclusive, but there is the suggestion that TRT can help in these areas.

How much HGH does he take?

Joe Rogan says on his podcast that he takes one unit of HGH a day. This is not a supplemental dose. It is likely a replacement dose that helps combat the loss of testosterone with aging. It is considered to be in the normal range.

What is HGH? What does it do for men? 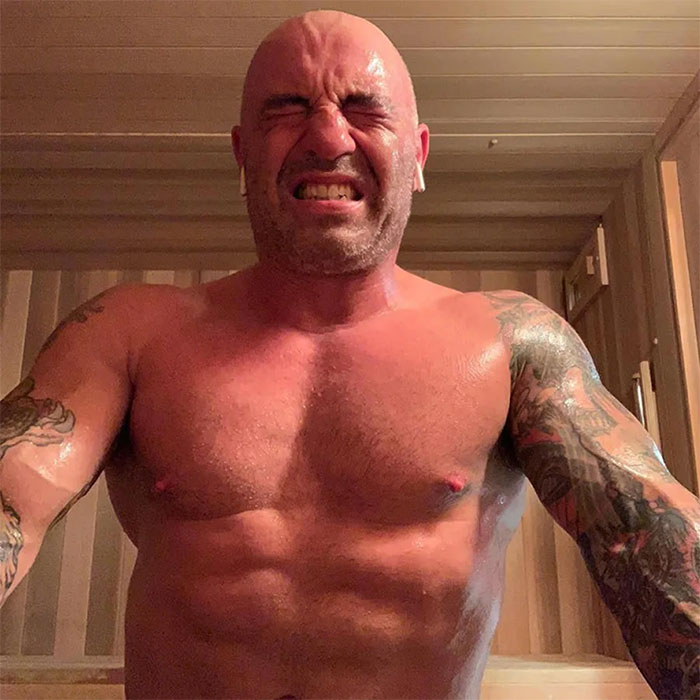 Human growth hormone, or HGH, is a frequently used substance that some feel helps them feel and retain their youth. However, evidence that HGH works in this matter is largely unfounded, and more alarmingly, HGH abuse can prove harmful to the body.

Human growth hormone occurs naturally in the body from the pituitary gland. It spurs brown growth in children and regulates bodily fluids, muscle growth, and metabolism.

Synthetic HGH is used in certain prescription drugs and supplements. Synthetic HGH was developed in 1985 and approved by the FDA for specific uses, such as treating deficiencies in children’s growth. In adults, prescribed usage is more limited, mainly replacing deficiencies and muscle loss as complications of other conditions.

HGH, however, is commonly used as a supplement against FDA guidelines and is billed by some advocates as an anti-aging agent. Despite these claims, evidence of such advantages from HGH injections is hearsay.

Does Joe Rogan have an HGH gut (bubble gut)? 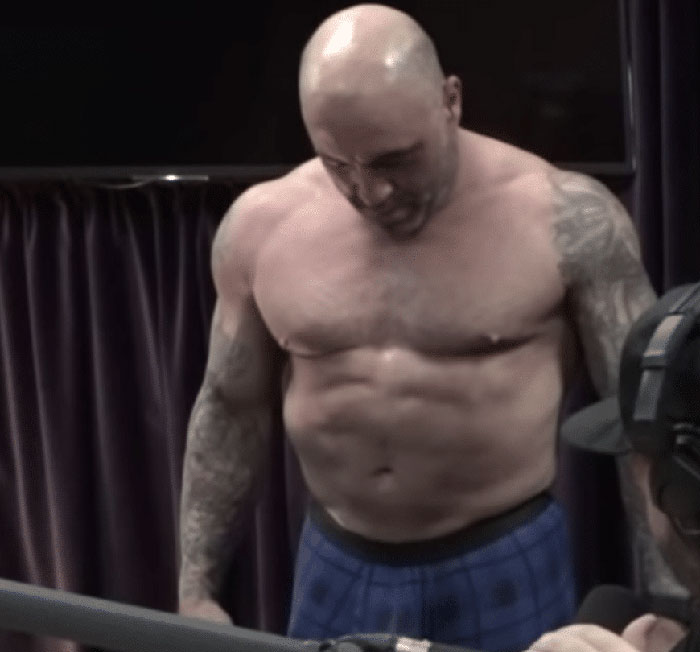 Joe Rogan’s physique became a discussion topic in a 2019 YouTube video for his Sober-October weigh-in. The discussion revolved around the unusual size of his belly compared to the rest of his body. Unfortunately, the critical discussion on his appearance became unavoidable, and speculation as to why he had such a protruding gut began to revolve around HGH.

Joe Rogan has countered these theories, such as when he tells Derek he has never had HGH gut due to eating pasta. Of course, he could be making a joke, but Rogan is prone to making outlandish statements on the show.

Regardless of Rogan’s suggestion, there is a correlation between the use of HGH and the swelling of the gut. It is not necessarily the result of HGH but rather a side effect. Specifically, HGH can cause organs to grow, meaning Rogan’s intestines may have swelled. This can combine with HGH’s abundance of insulin stored in the body as stomach fat. There is also the effect of water retention.

The growth could also be attributed to abdominal muscle growth, which may be only a partial factor.

Why does it look like Joe Rogan’s head has grown over the years? Does HGH cause your head to get bigger? 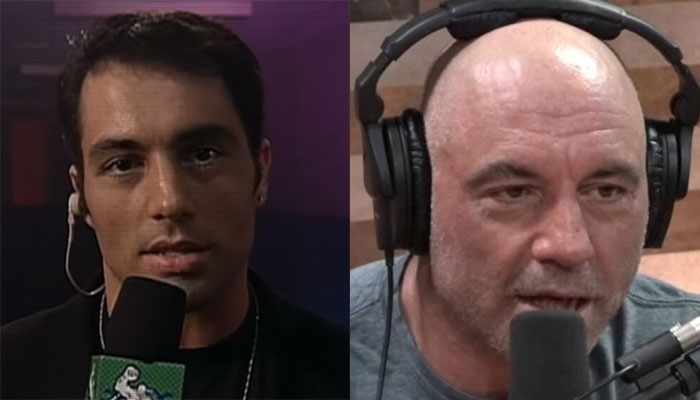 One dramatic aspect of Joe Rogan’s changes in appearance over the years is that his head has gotten, for lack of a better description, more prominent. Such an observed change is quite similar to the case of baseball player Barry Bonds who was charged with perjury for his refusal to acknowledge his use of steroids such as HGH.

But can HGH cause a person’s head to grow bigger? Yes, it can, as HGH is generated by the body to help bones grow. HGH use beyond normal levels can cause growth in flesh and bone, with some receptor sites being susceptible. Such places can be found in the skull. This requires substantial doses, however.

For Rogan, who has admitted to HGH usage, this can be explained by him perhaps underselling the amount of HGH he uses. His one-unit-a-day may only be a partial truth, though it is hard to verify.

Does Rogan use IGF-1? How Often?

Yes, Joe Rogan claims to use IFG-1. Furthermore, he claims he uses it every four days. Many people have expressed concern about the frequency of usage of the hormone.

IGF-1 is bodybuilder slang for Insulin-like Growth Factor 1. This is an anabolic hormone that stimulates the growth of bone, muscle, and other bodily tissues. IGF-1 is an essential hormone in the development of the body as it is a stimulating and independent growth hormone that works in conjunction with the hormones of the pituitary gland.

However, IGF-1 abuse is widespread in sports and bodybuilding, so Rogan’s use is not advised for most people.

Does Chris Hemsworth Use Steroids?