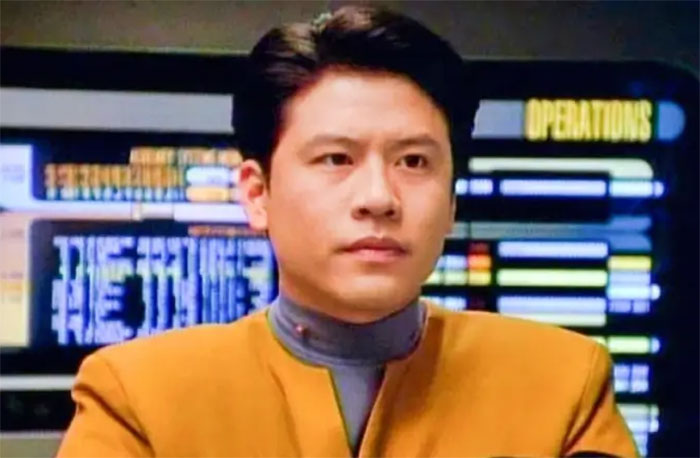 Garrett Wang is an Asian-American actor who is best known for his role as ensign Harry Kim on Star Trek: Voyager.

He was born in Riverside, California, on December 15th, 1968. He is of Taiwanese heritage as his parents were immigrants. He also has a sister named Laura. His Chinese-given name is Wang Yi Zhan.

As children, he and his sister would move often; he attended kindergarten in Indiana before moving to Bermuda, Memphis, Tennessee, and then back to California. The reasons for these moves are not known.

Growing up was difficult for Garrett as one of the only Asian people he knew of in some of the places he lived. in 1990, he attended a state-sponsored Taiwanese cultural exchange program, and this experience motivated him to look into acting as a way to provide role models for Asian Americans.

The 5’ 11” (1.8 m) Garrett Wang would attend UCLA and switch majors several times, finally settling on Asian Studies and opting for his electives in the theater. 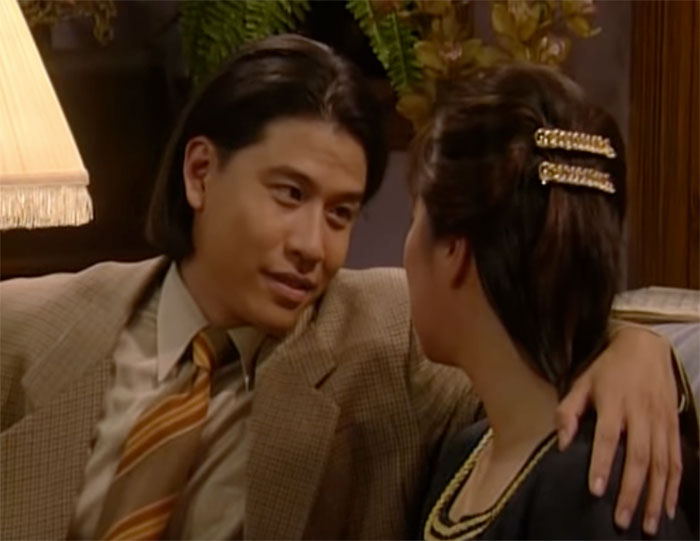 Garrett Wang’s early career had a ticking clock. When he decided to pursue acting full-time, he made a deal with his parents to quit after two years if they helped him with his expenses. He obtained a few roles in commercials, which led to his first credited role in the 1994 episode “Submission: Impossible” of Margaret Cho’s All American Girl.

He would take on a few roles in student films at UCLA but landed his first feature film in 1998 in Hundred Percent.

About a year and a half into his agreement with his parents, he would land the role for which he is most famous: Ensign Harry Kim in Star Trek: Voyager.

Growing up, Garrett Wang was a science fiction fan, notably Star Trek and Battlestar Galactica. Still, he had not seen many episodes of Star Trek: The Next Generation before auditioning for Star Trek: Voyager. 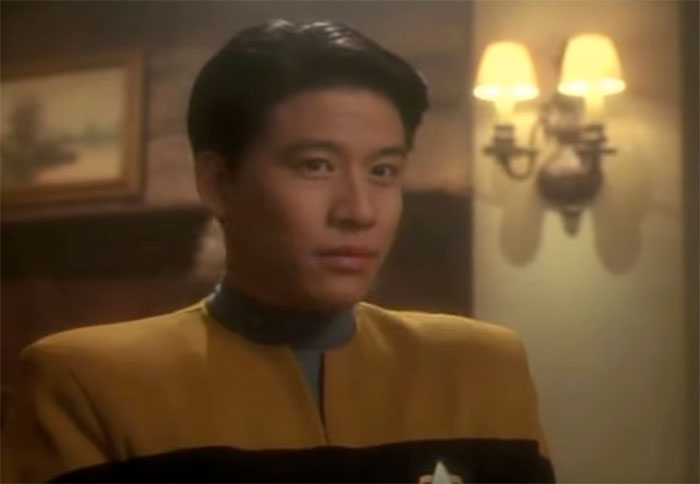 He joined the cast of Star Trek: Voyager in 1995 in the very first episode of the show, “Caretaker,” and would appear in close to 170 episodes of the show’s run, ending in 2001.

The character he would play, Ensign Harry Kim, would prove to be popular and serve as a positive role model for Asian Americans.

However, there were some tensions during the production of the show. Unlike other characters, Kim was not promoted in rank on the show, which rubbed the cast and fans the wrong way, given the show’s circumstances.

When Garrett asked writer and producer, Brannon Braga, why Harry was not promoted, he told Garrett “Well, somebody’s gotta be the ensign.”

Garrett Wang had petitioned on several occasions to direct an episode of Voyager but was never given the opportunity, like some other actors in the franchise. The reasons remain unknown, but Garrett Wang has pointed out a contentious relationship with producer Rick Berman, which seems to be a common thread among actors and crew of the franchise.

Garrett has never been shy about his disdain for Rick Berman, publicly calling him an ‘idiot’ and saying he is deserving of the first spot in line for hell.

Garrett mentions that him revealing some of his concerns to a TV Guide writer early in Voyager’s run might be the reason why he was never promoted on the show and why he was never given the chance to direct an episode. 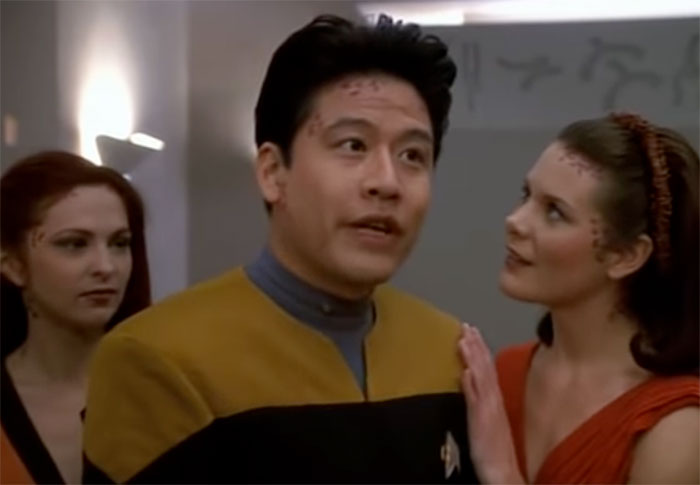 Garrett mentions that his favorite episode of Voyager is the pilot episode, ‘Caretaker‘. He says he enjoyed that episode because of the many awesome shooting locations, but most importantly it was the first time he got to meet his castmates, who would all become his life long friends.

What is Garrett Wang doing now?

After Voyager, Garrett Wang took sporadic roles from 2001 to 2015 in movies like Survival Island, Acts of Violence and Alongside Night. His most recent film was in 2020, where he starred alongside Snoop Dogg in the movie Unbelievable!!!!!

His latest role, which is in post-production is for the television show, Phoenix, as the character ‘Marc Wan’. 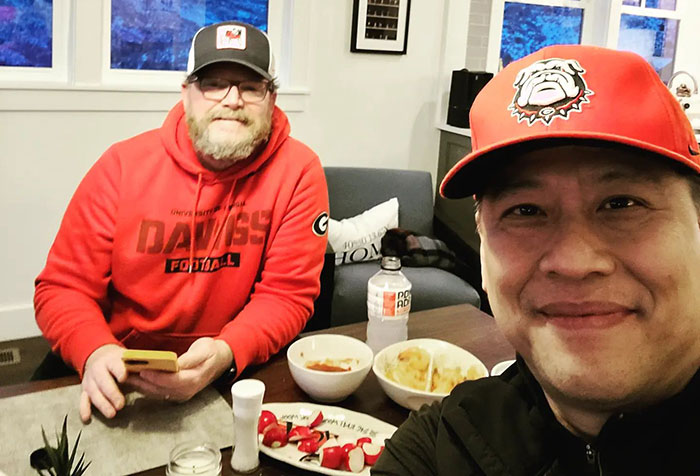 In May of 2020, he launched a podcast called The Delta Flyers with his co-host Robert Duncan McNeill, who played Tom Paris in Star Trek: Voyager. The duo discuss and review episodes of Star Trek: Voyager and share their opinions and behind the scene stories.

He also is a frequent convention guest and moderator. In 2010 he was named the director of the Trek Track for Dragon Con, helping to organize and provide the Star Trek programming for various conventions, and was the first actor to take on such a role. This also made him an excellent choice to help put together the Star Trek Cruise.

Like many former Star Trek actors, Garrett Wang also has an account on Cameo to allow fans a chance to get a customized message from him.

What is his relationship status? 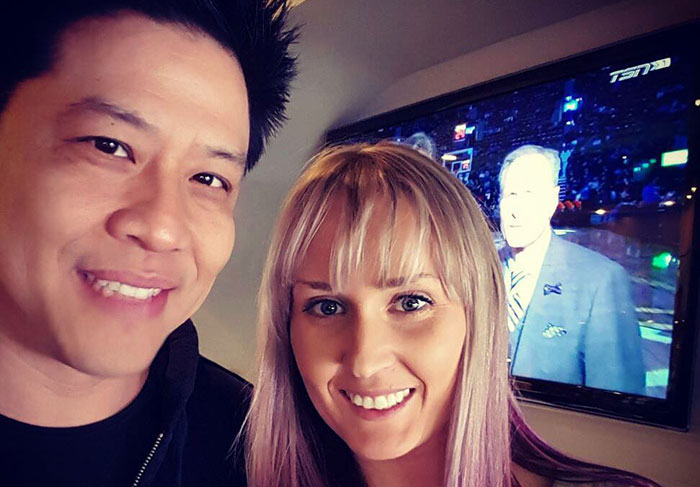 There is not much information about Garrett Wang’s romantic relationships online. There are no news articles or blind items, and what we do know can be seen on the social media accounts of him and his partner, Megan Elise.

Garrett Wang appears to be in a committed relationship, but there are no details about when and how he met Megan Elise. It seems that the two works together for event and convention planning.

Megan Elise may also have her own business as an event photographer based on her social media posts. 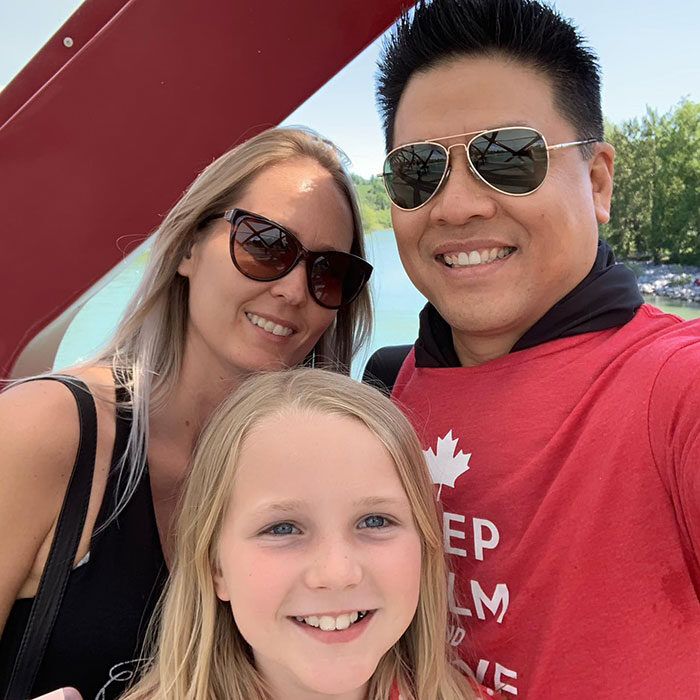 Garrett Wang does not have children, however it does look like Garrett has taken on a father role for Megan’s daughter Kealy.

1. When Jeri Ryan’s character was introduced into the show, the producers of Star Trek: Voyager wanted to trim the cast. They narrowed the choice between Jennifer Lien and Garrett Wang and because Garrett had recently appeared in People’s Magazine 50 Most Beautiful People list, the producer decided to nix Jennifer Lien instead. Garrett mentions that Kate Mulgrew held a farewell dinner party for Jennifer Lien, however Garrett said he completely spaced out and forgot about the dinner and went to Ikea instead. Garrett said Kate left him a message on his answering machine to chew him out for the lapse. 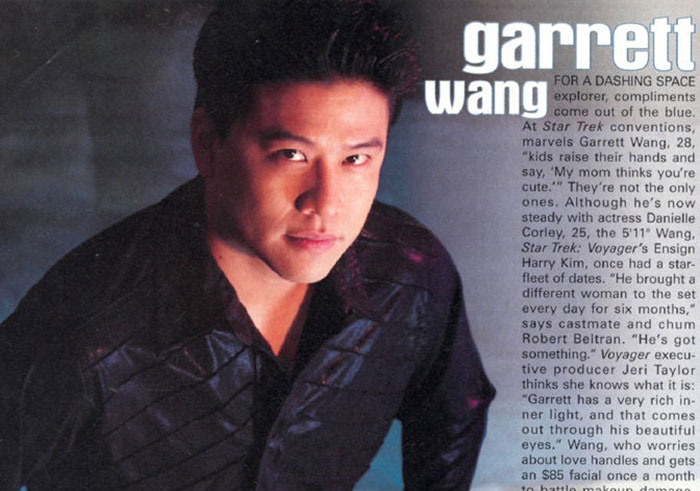 2. When Garrett met William Shatner for the first time backstage at the Tulsa Trek Expo, Garrett said William gave him a limp-wristed and half-hearted hand shake and immediately wiped his hands on his shirt afterwards. Garrett felt the compulsion to punch him in the stomach for the disrespect but he held back.

3. Garrett suggested to producers of Star Trek: Voyager that they should incorporate more action and comedy into the series, although the show-runner, Rick Berman brushed the idea off. Garrett said if he could create a Star Trek series, it would be something similar to the television show Scrubs but in Space and giving it more of a comedic angle.

4. Garrrett mentions that when he was auditioning for the part of Harry Kim on Star: Trek Voyager he almost ran over Harrison Ford in the Paramount parking lot.

5. Garrett revealed that the feud between Jeri Ryan and Kate Mulgrew on set was very difficult for him. He said it was like watching his mother, aunt or sister having issues between each other. He even cried about the situation when discussing the feud at a convention with Jeri Ryan. 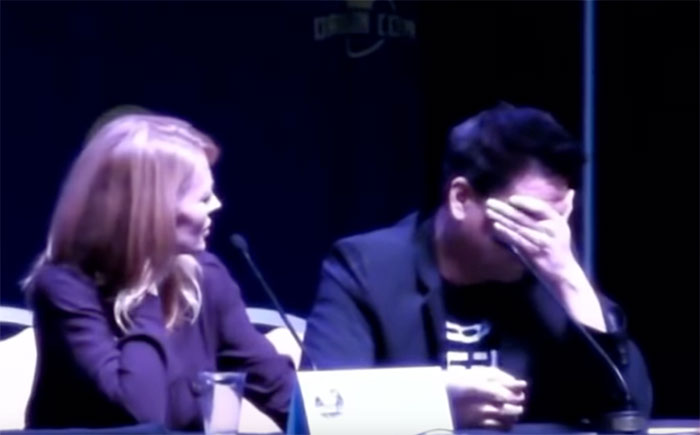 6. Garrett joking said he would love to be introduced on Star Trek: Lower Decks as the oldest ensign in Star Fleet history.

7. Garrett and Robert Duncan McNeill revealed on The Delta Flyers podcast that they were body shamed by the writers on Voyager after they had gained some weight. In the fourth season episode, entitled ‘Demon‘, quips about the weight was writing into the script. Garrett mentioned he went straight to the gym afterward and knocked off the weight, while Robert took up cycling to lose the extra pounds. 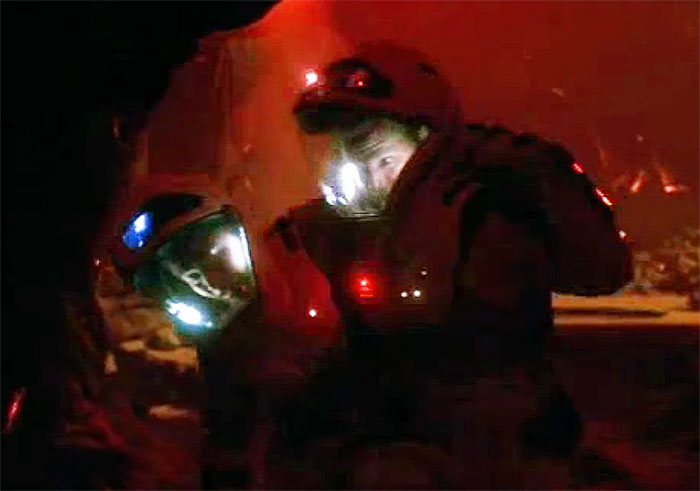 8. Garrett suggested a story line to the writers of the show, where the crew had a ship-wide talent show and he could do impersonations of The Doctor or Captain Janeway, but his idea was met with ‘Eh… no’. Although they rejected his ideas, there have been episodes of Voyager where characters on the show had to do impersonations of other characters, specifically after the Doctor took over Seven Of Nine’s body.

Is Garrett Wang on social media?