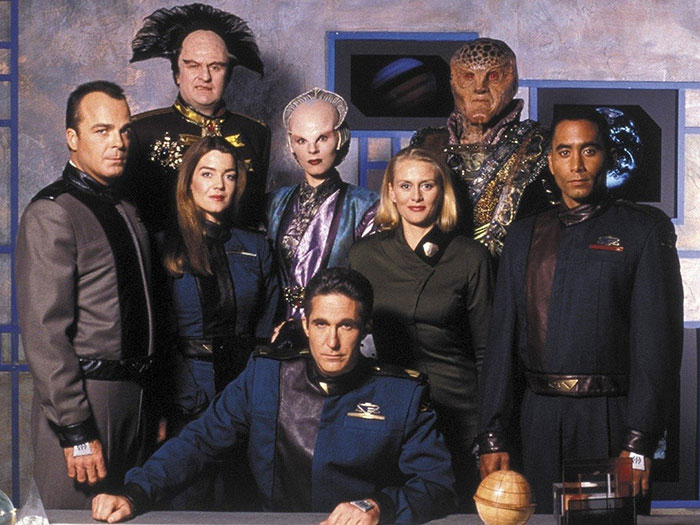 Babylon 5 was a science fiction TV show, commonly referred to as a “space opera”, that aired on the Warner Bros.’ Prime Time Entertainment Network between 1994 and 1998. The show followed the exploits of human military staff and alien diplomats aboard the space station Babylon 5, which served as a neutral space for different races and species in an eclectic and diverse galaxy to engage in diplomacy and trade.

Because it aired at a time when several Star Trek serieses were also airing, many fans believed the shows to be related or connected. Babylon 5, however, was unrelated to Star Trek.

Between 1994 and 1998, Babylon 5 enjoyed 5 seasons including 110 episodes and 6 TV films. Due to complications with the network PTEN that had been airing Babylon 5, the show almost saw its end after Season 4, and showrunner J. Michael Straczynski created a fitting end if it was to be the show’s last season. However, TNT picked up Babylon 5 for the fifth season, allowing Straczyski to put off the finale for one more season before tying up the loose ends and ending on his own terms.

It’s been years since the final episode, but Straczynski announced in 2021 that a Babylon 5 reboot would be in the works and airing on The CW “soon.” The reboot is expected for the Fall 2023 lineup.

What is the Babylon 5 cast up to now? Read on and find out! 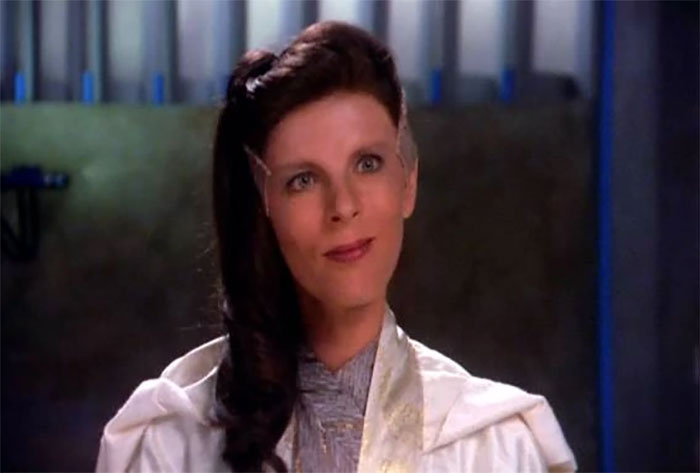 Furlan is most known for her role on Babylon 5 as Minari Ambassador Delenn. The Croatian actress continued finding work after Babylon 5 wrapped including a recurring role on popular drama Lost and a guest spot on NCIS.

Furlan was also a singer, releasing her one and only album Songs From Movies That Have Never Been Made in 1998 as Babylon 5 was coming to a close. 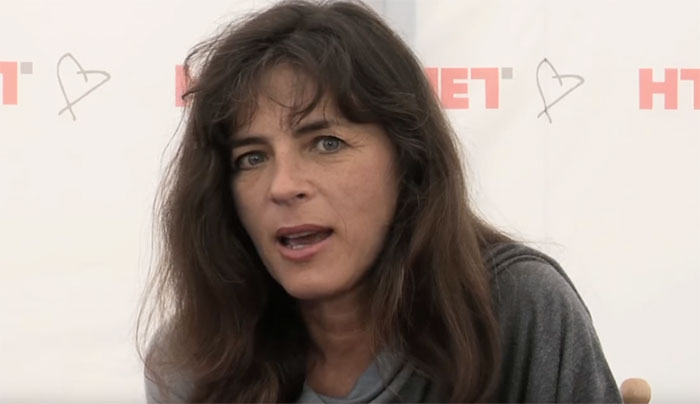 She would appear in various TV shows and films over the remainder of her life, but sadly passed away in January 2021 from complications of West Nile virus. She was 65 years old.

Biggs was not only a television actor, but an accomplished stage actor as well. After his work on soap opera Days of Our Lives and Babylon 5, Biggs would be featured in plays such as The Tempest, Cymbeline, and The Taming of the Shrew.

Unfortunately, Biggs collapsed in his home in 2004 and was rushed to Providence Saint Joseph Medical Center, where he passed away due to complications of aortic dissection. He was only 44 years old. 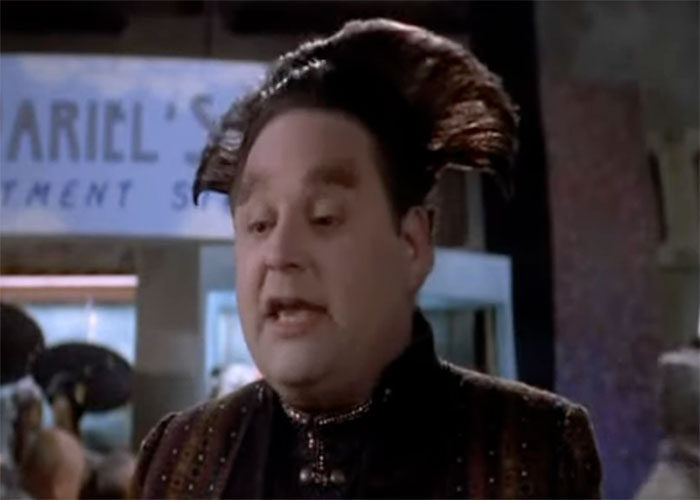 Furst played the Centauri Vir Cotto on Babylon 5, and he continued to work as an actor, director, and producer after the show wrapped. Babylon 5 would mark Furst’s directorial debut, and he would go on to direct episodes of Crusade, as well as film Title to Murder and TV movies Dragon Storm, Path of Destruction, and Basilisk: The Serpent King. 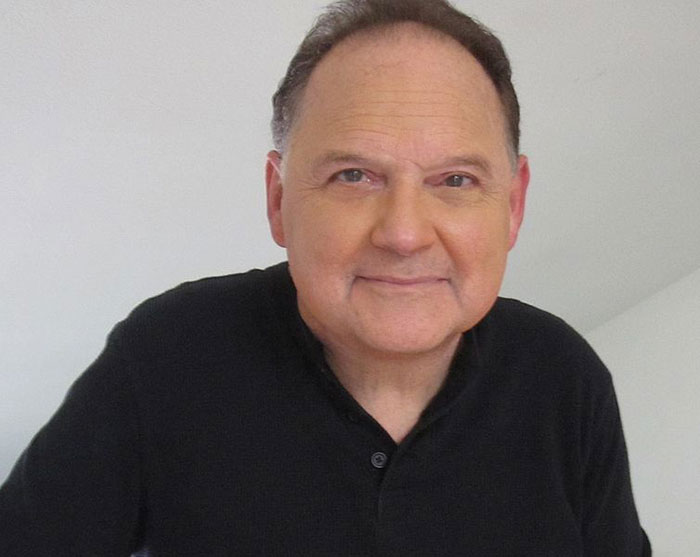 Unfortunately, First died in 2017 from complications related to diabetes. He was 63. 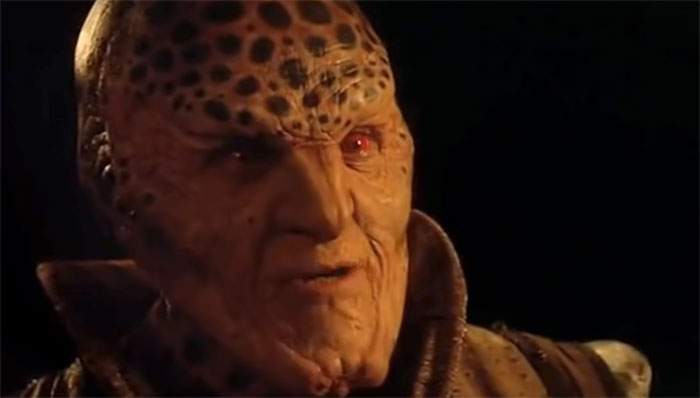 Katsulas portrayed Narn Ambassador G’Kar on Babylon 5, and would continue working as an actor after the show ended. He would act in two films, Mafia! and A Piece of Eden, as well as TV films related to Babylon 5 including Babylon 5: In the Beginning and Babylon 5: The Legend of the Raiders. He would also appear as a guest on shows like Millenium, Star Trek: Enterprise, and NYPD Blue.

Unfortunately, Katsulas died of lung cancer in 2006. He was 59 years old. 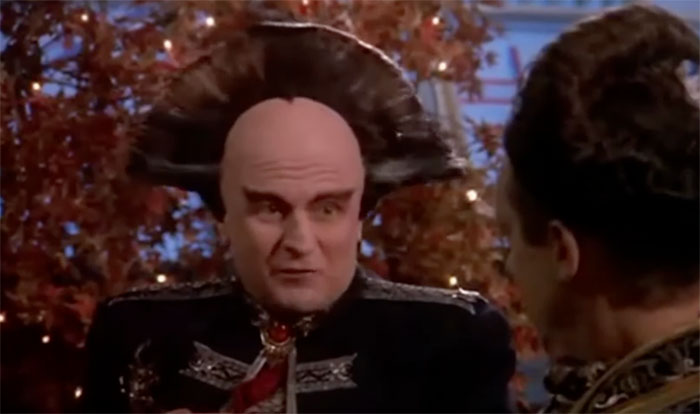 Jurasik was a recognizable face in sci-fi in the late ‘90s, appearing as Ambassador Londo Mollari in all episodes of Babylon 5 as well as a recurring role on 3rd Rock from the Sun and Sliders. Jurasik would appear on a single episode of Dawson’s Creek following this, and then receive no other TV roles until Mercy Street in 2017. 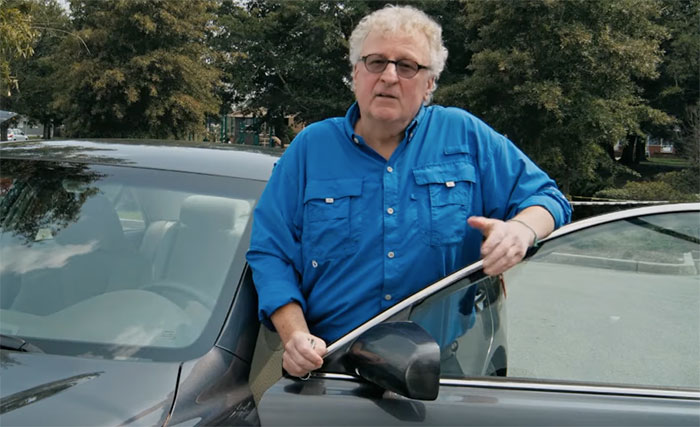 Jurasik’s film career, on the other hand, was quite active once Babylon 5 concluded, and he was featured in films like Runaway Jury, Stateside, Little Red Wagon, 42, and The Longest Ride. He remains active as an actor today. 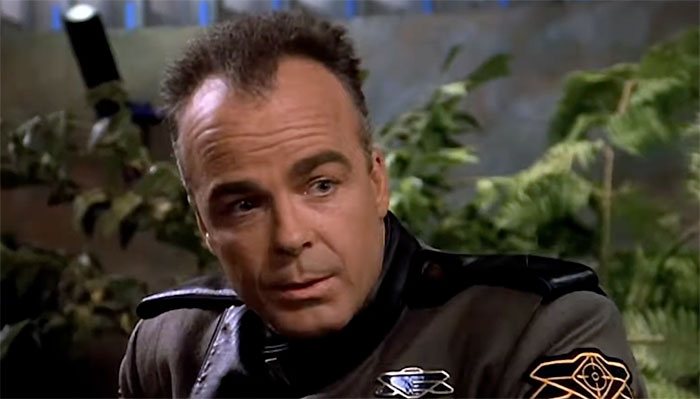 As an actor, Doyle was best known for his role as security chief Michael Garibaldi on Babylon 5. Doyle would appear as a guest on shows such as Sliders, Beverly Hills 90210, NYPD Blue, and JAG, as well as TV films Babylon 5: The River of Souls and Babylon 5: A Call to Arms. Regarding his film career, Doyle landed roles in movies such as Storm Watch, Devious Beings, Lost Treasure, and The Long Ride Home.

Beyond his acting career, Doyle tried his hand at politics and ran as the Republican Party candidate for California’s 24th congressional district in the U.S. House of Representatives in 2000. Although Doyle spent no money on the campaign, he won the primary, eventually losing the general election to incumbent Democrat Brad Sherman.

Following this brief stint, Doyle began broadcasting as a right wing Republican personality and created The Jerry Doyle Show in 2012. It rose to become the sixth most listened to show in the country, averaging 3.75 million weekly listeners.

Unfortunately, Doyle passed away in his home “of natural causes” in 2016. He was 60 years old, and it is believed that chronic alcoholism contributed to his death. 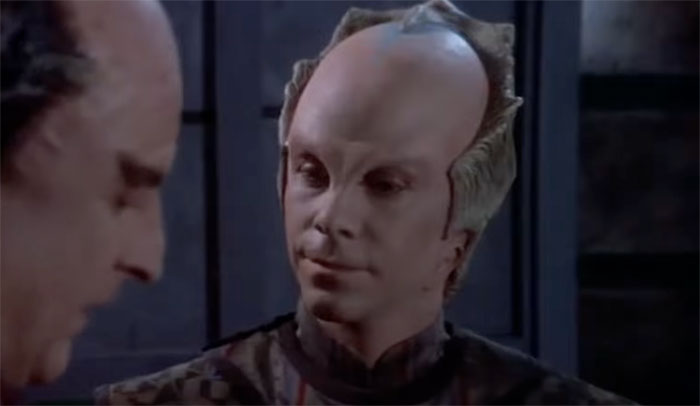 Mumy was no stranger to acting by the time he acted on Babylon 5, as his child actor works included I Dream of Jeannie, Bewitched, and The Twilight Zone, but sci-fi fans know him best as  Will Robinson from the original 1960’s Lost in Space and Lennier on Babylon 5.

After the show wrapped, Mumy would lend his voice to shows like Space Ghost Coast to Coast, Buzz Lightyear of Star Command, Bravest Warriors, and Transformers: Rescue Bots. He would also appear in The Twilight Zone: Series in 2003 and 2 episodes of 2018’s Lost in Space.

Mumy is an accomplished musician and author as well. He remains active as an actor, writer, and musician today, and lives in Los Angeles with his wife, Eileen Joy Davis, and their two children, Seth and Liliana. 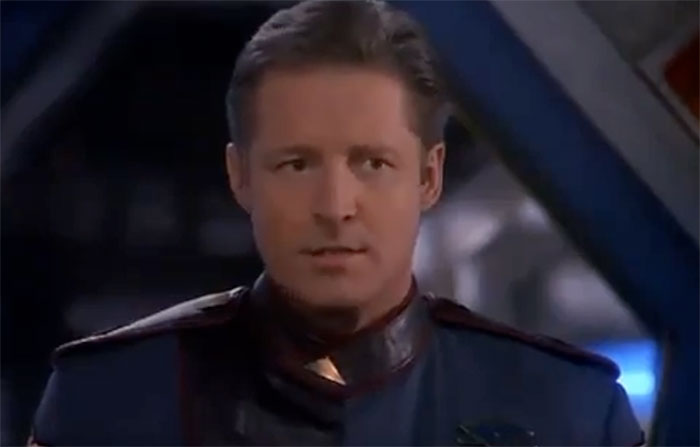 Boxleitner played Commander then President John Sheridan on Babylon 5, and the actor continued appearing in numerous TV shows and films following the show’s conclusion. Boxleitner would appear regularly on shows like Young Blades, Tron: Uprising, Cedar Cove, and Supergirl, as well as guest spots on shows like She Spies, Crossing Jordan, Heroes, NCIS, and The Orville.

Boxleitner also appeared in numerous films, including a number of TV films affiliated with Babylon 5 and movies such as Free Fall, Contagion, Legion of the Dead, Tron: Legacy, and The Oath. 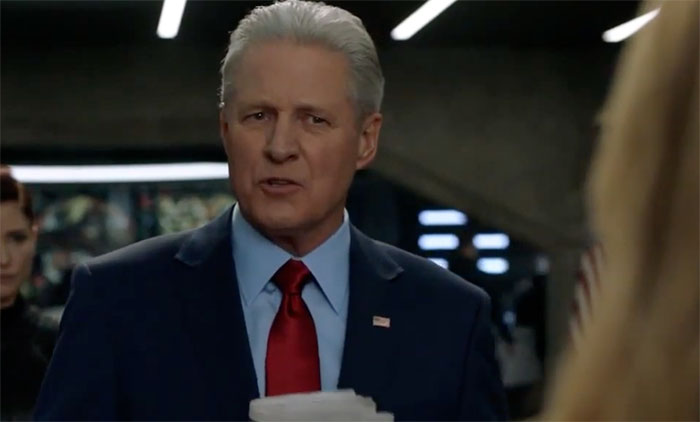 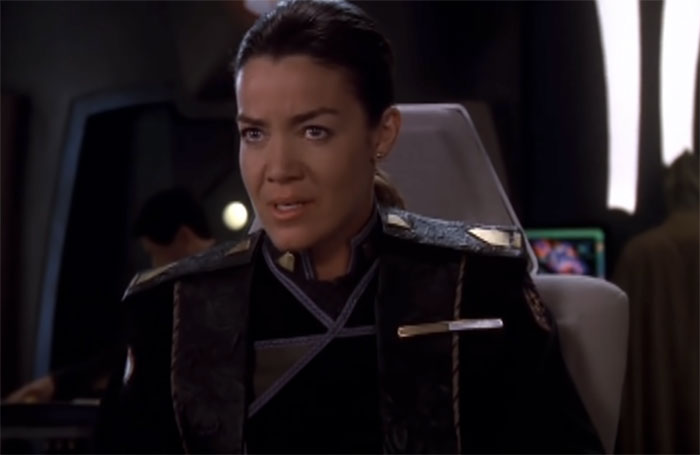 Christian played Commander Susan Ivanova on Babylon 5, and remained active in Hollywood after the show’s culmination. She received main cast or recurring roles on shows such as Freaks and Geeks, Starhyke, Broken News, Look: The Series, and Netflix’s Blood of Zeus. Most recently, she has received a number of guest roles on Fox’s 9-1-1. Christian’s guest spots include shows like NYPD Blue, Everwood, Nip/Tuck, Grimm, Castle, The Mentalist, and NCIS.

Christian also has an extensive film career, having appeared in movies like Atlantis: The Lost Empire, Half Past Dead, The Garden, and Meteor Apocalypse. She will also feature in upcoming films The Pipeline and Dreadnought: Invasion Six.

Christian has done voice acting in some shows and movies, but also popular video games including Halo 4, Fallout 4, Fallout 76, and World of Warcraft: Legion. 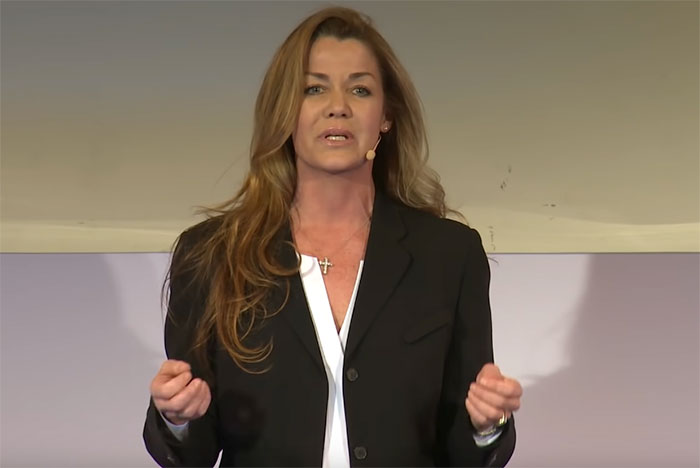 Christian is also a vocal advocate for addressing alcoholism and is a proponent of The Sinclair Method, a medication-based approach to treat alcohol dependence, and has written on the subject as well as producing a documentary entitled One Little Pill to raise awareness. By her own account, this approach to treating alcoholism saved her life in 2009 when she was struggling personally. 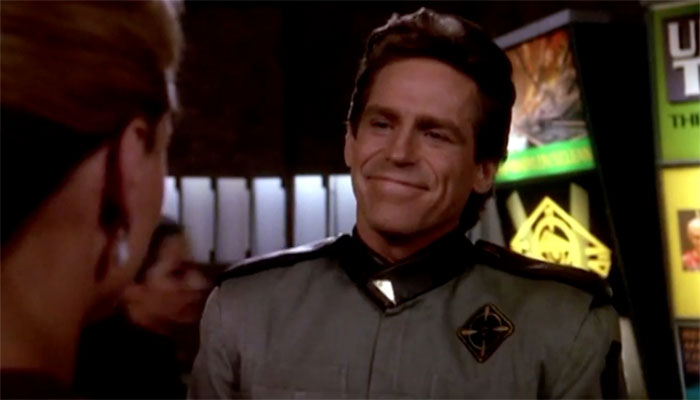 Conaway is known by sci-fi fans as security officer Zack Allan on Babylon 5, but he’s also recognizable as Bobby Wheeler on Taxi and Kenickie in Grease.

Conaway appeared in guest spots on various shows and received minor roles in movies like Jawbreaker and Man on the Moon, but he seemed to fall away from show businesses after Babylon 5 wrapped.

Unfortunately, this exacerbated previous issues with substance abuse and Conaway appeared on Celebrity Rehab with Dr. Drew in 2008, where he divulged tales of childhood abuse, molestation, substance addiction, and other traumas that have led him into depression and contemplating suicide. 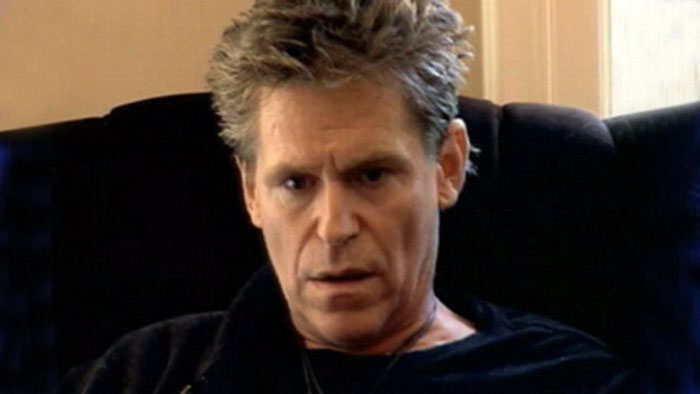 Unfortunately, Conaway fell ill in 2011 and was placed in a medically induced coma. Conaway’s family elected to take him off life support after doctors determined he would likely not recover. A post-death autopsy determined Conaway’s condition was caused by aspiration pneumonia, encephalopathy, and other conditions caused by substance abuse and overdose. 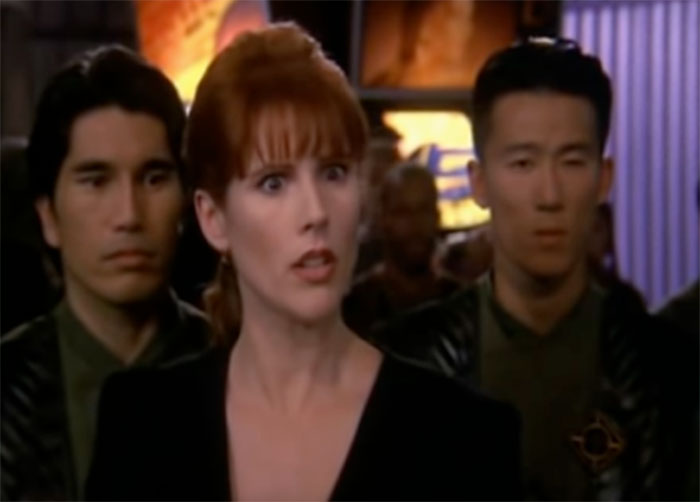 Tallman played Lyta Alexander in Babylon 5, but is also known for her role in Night of the Living Dead and various Star Trek appearances including The Next Generation, Deep Space Nine, and Voyager.

After Babylon 5, Tallman continued her film and TV career by appearing in Sheena, Without a Trace, InAlienable, Dead Air, and Castle.

Tallman would get married in 1999 and divorce her husband in 2008, subsequently dating Babylon 5 creator and showrunner J. Michael Straczynski, and assisting him in opening his production company, Studio JMS.

Tallman would become the CEO of Studio JMS in 2021, but left the company in 2013 following a breakup with Straczynski.

She remains an actress, stunt performer, and studio executive today. 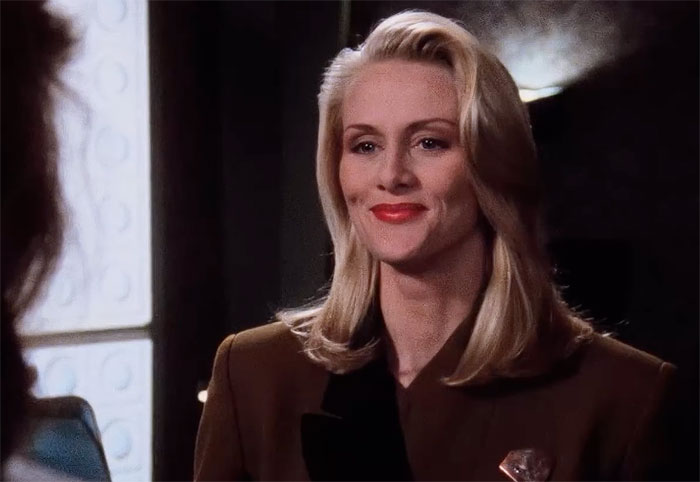 Thompson played a telepath named Talia Winters on Babylon 5, but her career continued flourishing after the show concluded. Thompson landed a main role on NYPD Blue and was featured in 77 episodes of the show. She would also go on to appear regularly in shows like JAG and 24, as well as appear as a guest on shows like The Division and Bones.

Thompson took a hiatus from acting from 1999 to 2002 to become a journalist instead. In 1999, she earned her GED and began work at a CBS affiliate in Albuquerque, KRQE. She would eventually move up to an evening anchor position for CNN’s Headline News in 2001. The hire caused controversy given her one year of journalism experience, and Thompson left the network in 2002 to return to acting. 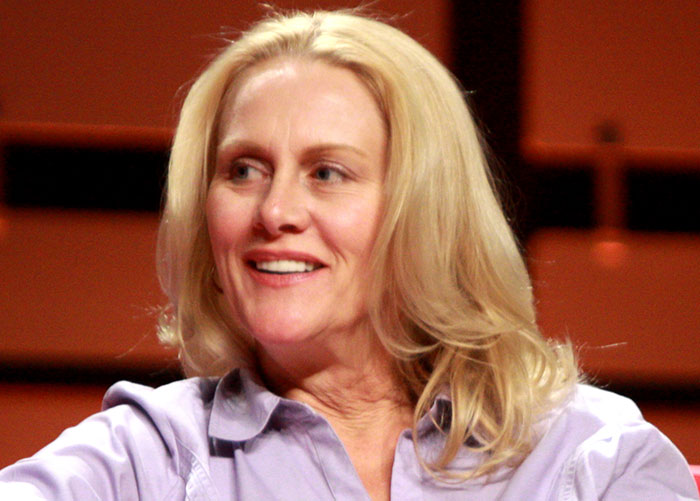 Allegedly, her departure from CNN was unrelated to the controversy and simply stemmed from her disagreeing with what the network chose to showcase as news. She remains an actress today.