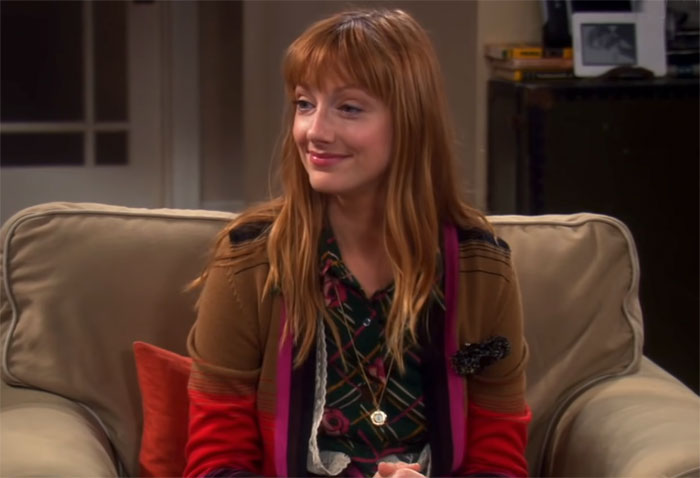 Judy Greer, born in Detroit Michigan on July 20th, 1975 as Judith Therese Evans, is best known for her roles on the television series Arrested Development, How I Met Your Mother, and The Big Bang Theory, and supplying the voice of Sheryl Tunt on the animated comedy series Archer.

Her parents are Richard Evans, a mechanical engineer, and Mollie Ann, a hospital administrator and former nun, and Judy grew up in Michigan’s Redford Township and Livonia as an only child. 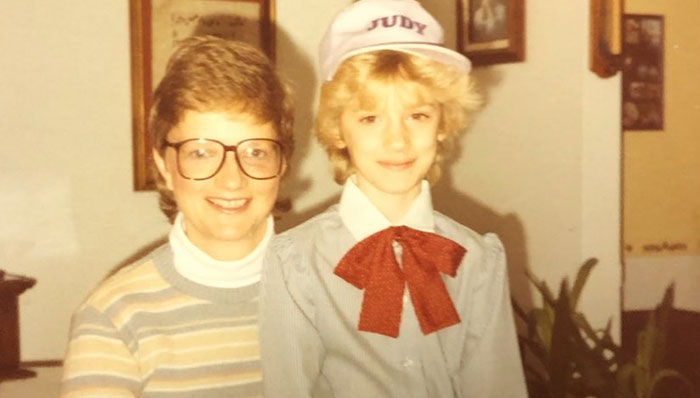 She graduated from Churchill High School, where she was a member of the Creative and Performing Arts program. After nearly a decade training in classical Russian ballet, she turned her attention to acting, pursuing a bachelor’s degree in Fine Arts at The Theater School at DePaul University. 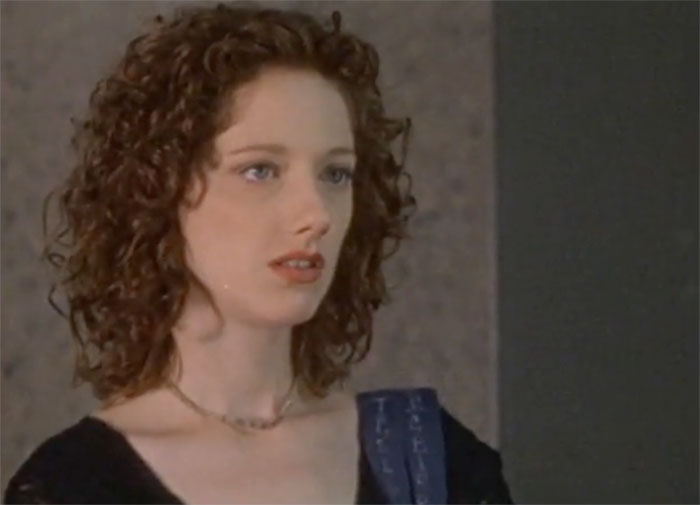 She landed her very first role in the 1997 horror film Stricken.

Stricken was about a group of college students involved in a prank gone bad, leading to a deadly murder spree. Judy, who had now officially taken her mother’s maiden name “Greer” as her surname to avoid confusion with other actresses named Judy Evans, played “Cynthia,” one of the six students.

Immediately after, she scored an appearance as “Cindy de Patisierre” in an episode of Early Edition, a dramedy television series about a man who mysteriously receives tomorrow’s newspaper today, giving a glimpse into the immediate future.

She also had a bit part as “Andrea” in David Schwimmer and Jason Lee comedy Kissing a Fool (1998) and played “Gail” in an episode of comedy Oh Baby!, about a woman choosing to have a baby in her later years. 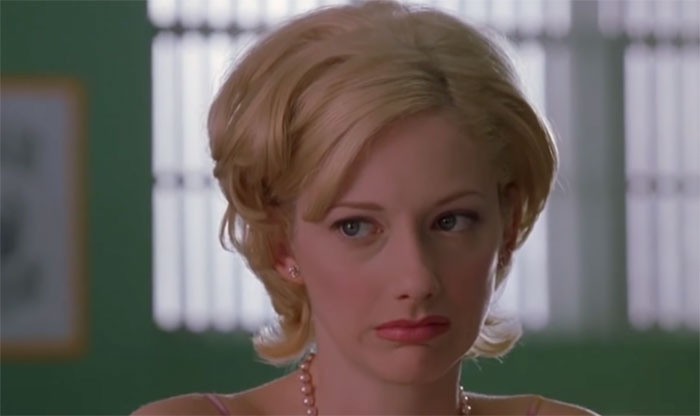 Yet, she earned her biggest role yet when she earned the part of “Fern Mayo” in Jawbreakers, which featured Rose McGowan, Rebecca Gayheart, and Julie Benz as teens involved in an accidental murder, eventually discovered by Judy’s character Fern. To keep her silent, they give her the ultimate makeover, converting her from school geek to stylish Vylette.

This led to a series of movie roles throughout 1999 and 2000, including appearances in Three Kings, The Specials, and What Women Want among others, landing a co-starring role in Rom Com film The Big Split as “Tracy,” a filmmaker who decides to finally drive.

She meets “Frank,” played by Martin Hynes, and the two begin a whirlwind romance and shotgun engagement. 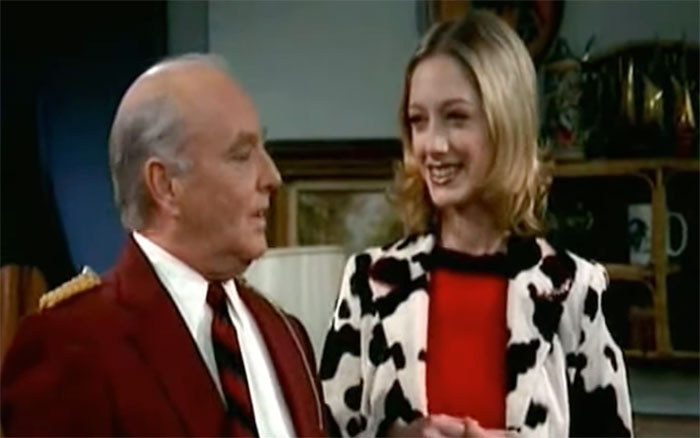 Also during this period, she got her first shot as a full cast member of a television show, playing “Puff Conklin” on the American sitcom Love & Money, which, while short lived, won a Primetime Emmy for “Outstanding Art Direction for a Multi-camera series.”

The show revolved around the eccentric Conklin family (including Puff) and the drama that arises when heiress Allison Conkin falls for a blue-collar maintenance man. Judy played in all 13 episodes of its single season.

This was her first role as a regular cast member, but she would soon earn a popular recurring role on a show that would run for three seasons and then an additional season on Netflix years later in 2013, then again in 2018 – Arrested Development. 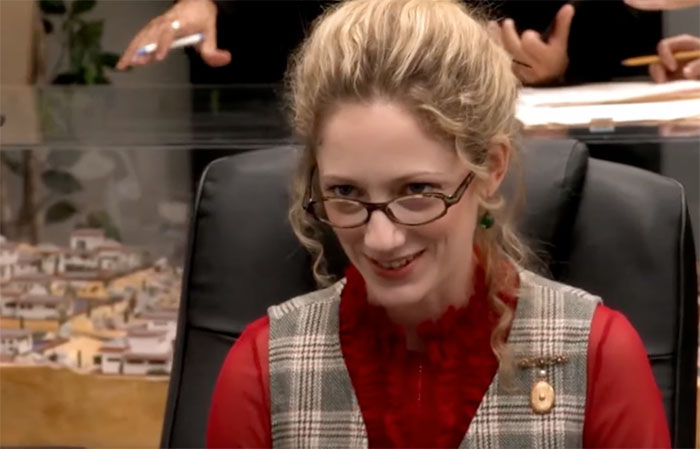 Kitty was the secretary and mistress of George Bluth (Michael’s father) before his arrest, blackmailing the family to remain on the payroll by threatening to reveal secret information that George revealed to her previously.

She was obsessive about George, continuing her relationship with him even while he was in prison, yearning to have his children. This infatuation grew so strong that she eventually broke him out of prison. However, he grew tired of her and left, which drove her to kidnapping him in an effort to bear his progeny.

Eventually, she realized she had gone overboard and settled down, requesting that the Bluth family leave her alone to live her life. She became employed as a development girl at Imagine Entertainment, eventually getting her supervisor fired so she could serve as Ron Howard’s personal assistant.

Crazy Kitty Sanchez with her penchant for flashing people was a fan favorite character, and brought her a lot of positive attention. 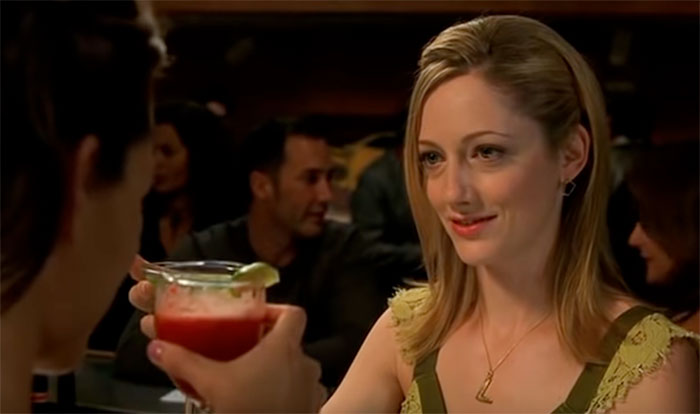 Starring opposite Jennifer Garner, 13 Going on 30 was perhaps the start of Judy’s common role as the “best friend” in films. Her character, “Lucy Wyman,” performed that role for Garner’s “Jenna Rink,” a geeky girl who makes a wish to be grown on her 13th birthday, awakening the next morning as a 30-year old woman, having no memory of the time that passed in the interim.

Despite enjoying her newfound freedom, she realizes that she has indulged in a lot of nefarious behavior during the time she cannot recall, and ultimately gets into a savage competition with Lucy at the magazine that ends their friendship.

Things go from bad to worse for her, but fortunately, she realizes that she has a second chance to redo the mistakes from her past.

The movie was well received, performed well in theaters, and became one of that year’s best selling DVDs. This was another feather in Judy’s cap, earning her many similar roles down the line. 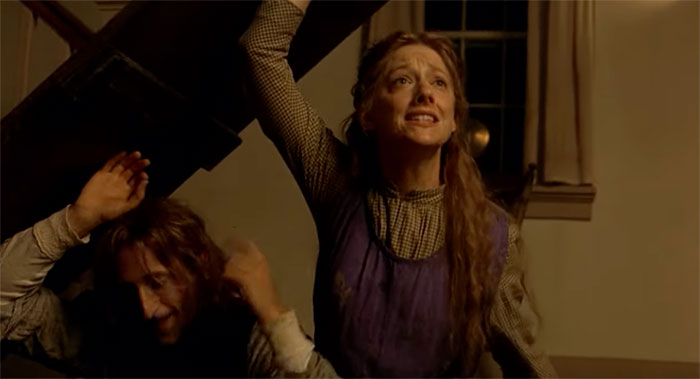 That same year, Judy served a supporting role in M. Night Shyamalan’s The Village, as blind protagonist Ivy Walker’s older sister “Kitty,” who is preparing for her marriage to Christop Crane.

The characters live in what appears to be a 19th century village deep in the forest and have been forbidden to leave the town because of strange creatures that prowl the woods. However, when Ivy’s love-interest Lucious is injured, she sets out on a quest beyond the falls to find help and uncovers a disturbing truth, kept a secret within her own community.

The movie performed well at the box-office and won several awards, but critics were particularly disappointed in what they viewed as an “anti-climactic” ending.

Nonetheless, this was more great exposure for Judy’s acting career, as she was appearing in more and more hit and blockbuster films, even if only as supporting cast.

Two And A Half Men 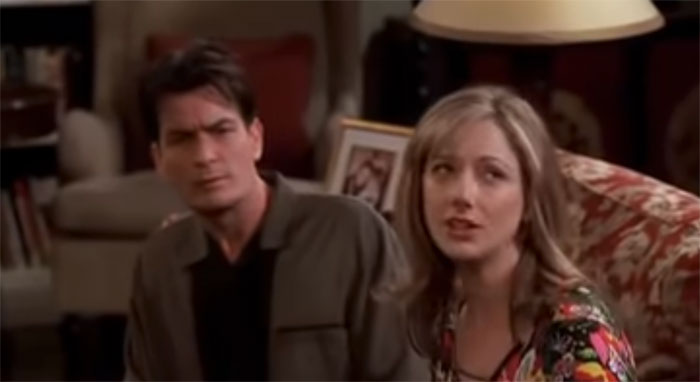 Between 2007 and 2015, Judy appeared in 13 episodes of Two And A Half Men and played two different characters.

Her first appearance on the show was in the episode ‘Smooth as a Ken Doll’ and she played the charcater of Myra Melnick, Herb’s little sister, who becomes a love interest for Charlie after they bond over a mutual dislike over Judith. She would play the character for two episodes in 2007 and would later return to the show as Bridget Schmidt in the 2009 episode, ‘People Who Love Peepholes.’ 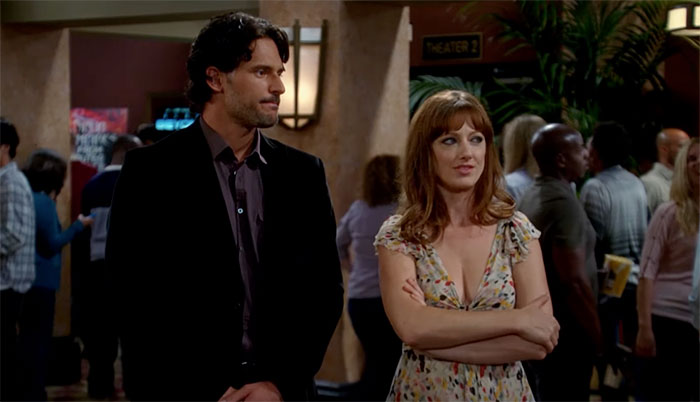 Bridget is Walden Schmidt’s ex-wife and the main antagonist in the ninth season. Judy would play the character for 11 episodes throught season 9,10,11 and 12.

During this time, she found an extended role as main cast member of the stop-motion animated series Glenn Martin, D.D.S. voicing character “Wendy Park” through two seasons, a total of 39 episodes.

The series follows a dentist as he takes his family cross-country after his house burns down. Judy’s character is a teenager serving as an assistant and employee of business-obsessed 11-year old daughter Courtney Martin. 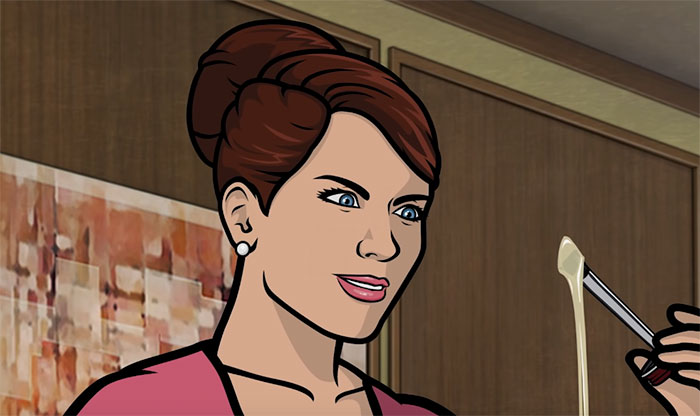 That same year, she took on what is one of her most popular and enduring roles – that of character “Cheryl Tunt” in the animated action comedy Archer that continues still today. There have been 134 episodes of Archer through 13 seasons, and Judy has voiced “Cheryl” in each of them.

She was originally the personal assistant for Malory Archer, Chief Executive Officer of ISIS and Sterling’s mother until she retired at the end of season 12, putting her son in the role.

Cheryl also moonlights as a country music singer under the pseudonym “Cherlene.”

However, her success and longevity in this role have not stopped her from participating in myriad other projects. 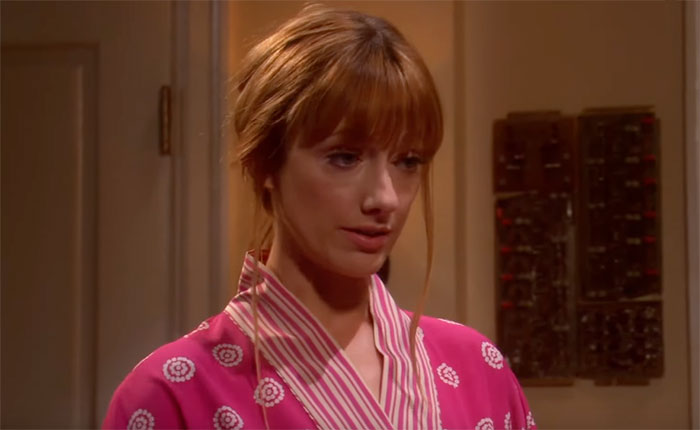 In 2011, Judy landed one of her most memorable role as Dr. Elizabeth Plimpton, a sexually charged cosmological physicist, in season three, episode twenty one of The Big Bang Theory.

She is introduced as a friend and personal guest of Sheldon, who quickly takes to Leonard and he eventually gives into her advances. 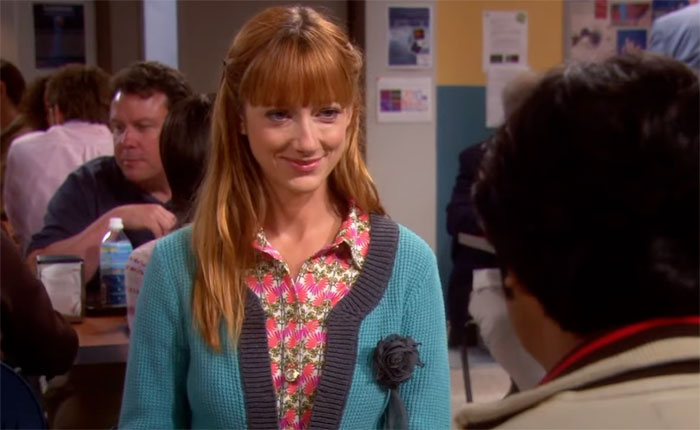 Later she attempts to seduce Raj and tries to setup a four-way with Leonard, Raj and Howard, however, the guys don’t want to see each other naked and they all back out, leaving her and Raj to get to know each other better. 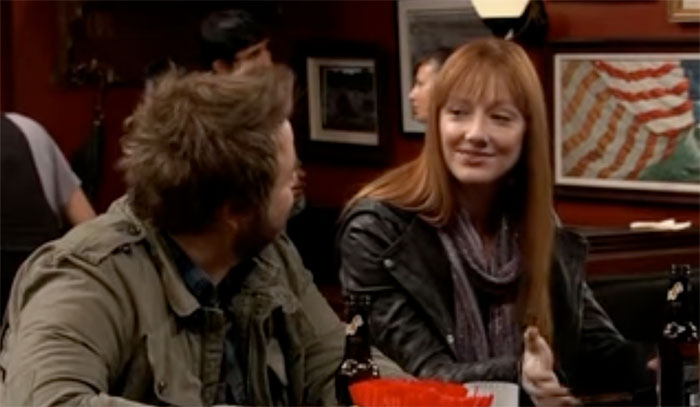 In 2011, she joined the main cast of Rom Com series Mad Love as “Connie Grabowski,” one of four friends that share varying love-hate relationships while living in New York. Joining Sarah Chalke, Jason Biggs, and Tyler Labine as the final member of the main cast, she appeared in all 13 episodes of the first season.

Unfortunately, the show was then canceled due to low ratings.

Once more, Judy continued her comfortable role, finding work with many more television shows and movies.

During 2015’s Jurassic World, she found herself once more playing sisters with actress Bryce Dallas Howard, who played protagonist Ivy in The Village with her.

This time, Judy’s character was “Karen Mitchell,” wife of Scott Mitchell and mother of Zach and Gray, who they sent on a fateful vacation to Jurassic World. As referenced, she is also the older sister of Howard’s character “Claire Dearing” in the film.

While yet another minor role, the film puts another blockbuster title under her belt to add to her already extensive career.

What is Judy Greer Doing Now? 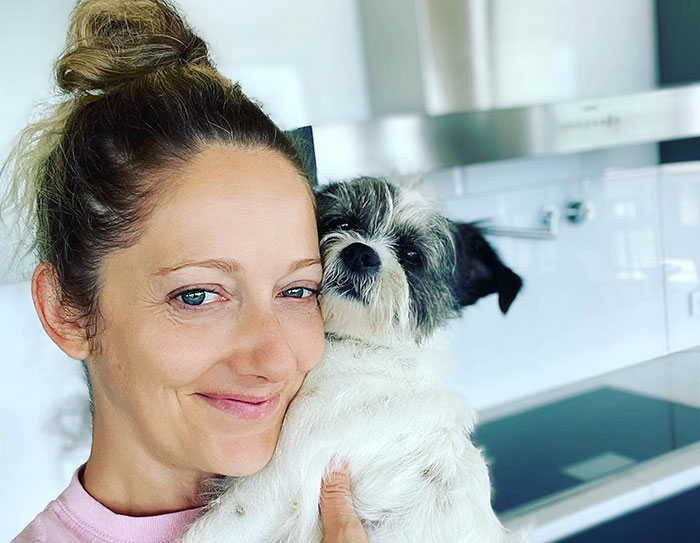 Judy Greer is still very active acting in television and movies and it looks as though she has no plans to stop acting any time soon.

She recently served as a main cast member alongside Jim Carey in both seasons of the comedy series Kidding, which finds her in the role of a nurse named “Jill Picirillo,” the ex-wife of Carey’s character “Jeff Picirillo, a kids television host, as he struggles to cope with the breakdown of his family. 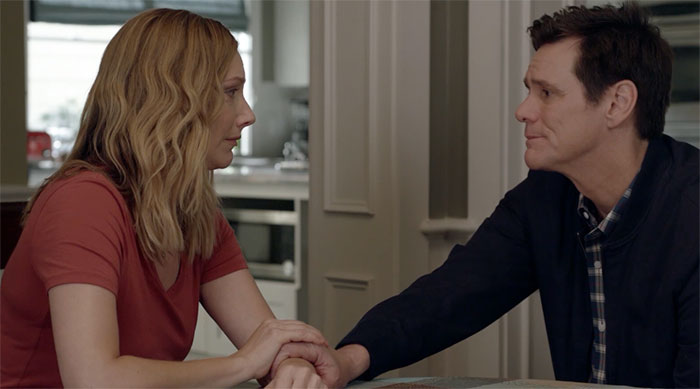 She also plays “Bree Marie Laron on Hulu’s new series Reboot and continues to voice her popular character Cheryl in Archer. She is also involved in many projects that are in production or post-production, such as Gringa, The White House Plumbers (TV mini series), Flint Strong, L.A. Strong, and Eric Larue. 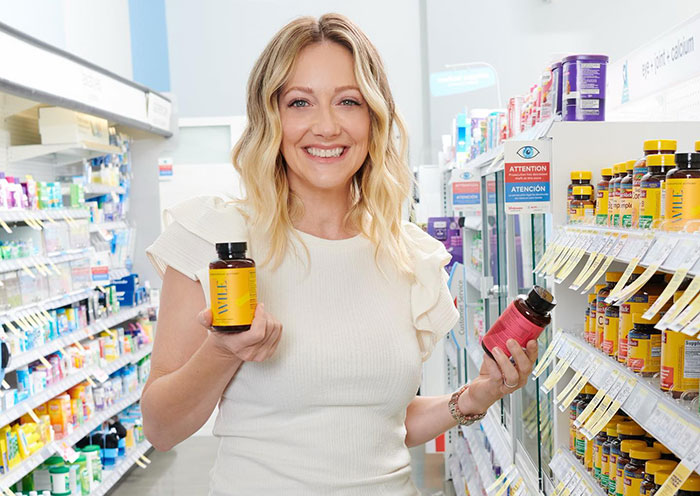 Furthermore, she is a founding partner for naturopathic supplement label “Wile,” geared toward women over 40 facing hormonal imbalances.

She is also a strong advocate of Project Chimps, which works to provide care for chimpanzees suffering from the effects of research experimentation.

She tried her hand at directing with 2017’s A Happening of Monumental Proportions and has also dabbled in the world of writing, publishing a biographical novel of essays entitled I Don’t Know Where You Know Me From: Confessions of a Co-star, where she regales her readers with stories from her life. 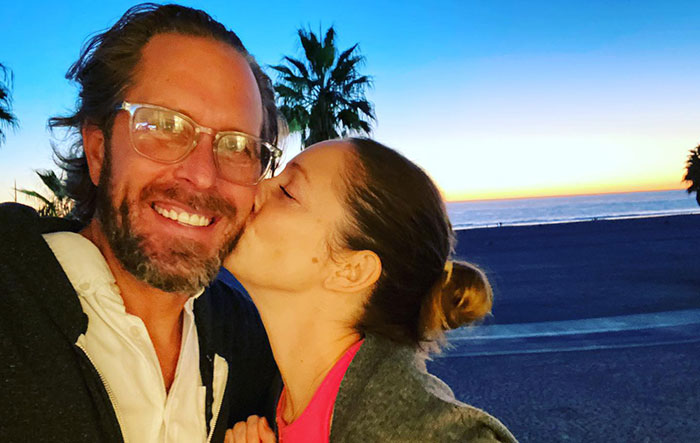 On top of her overloaded schedule, she is married to Real Time with Bill Maher executive producer Dean E. Johnsen, and is a stepmother to their two children from his previous marriage.