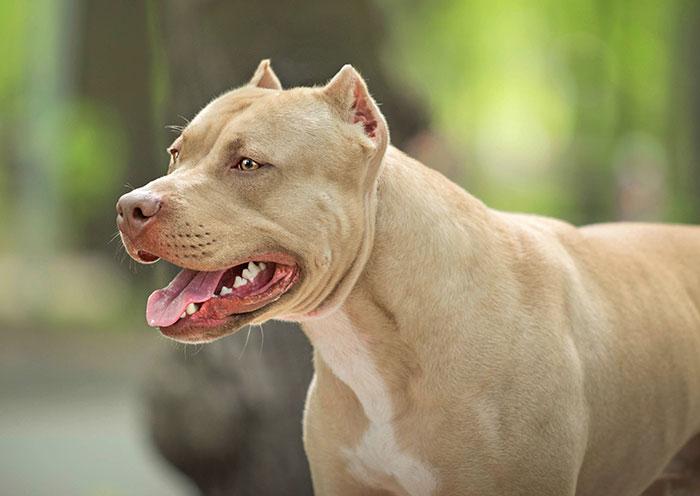 Cropping the ears of a dog is a very controversial subject around any dinner table. Some breeders are adamant it’s in the dogs best interests or there’s nothing wrong with it but others are fundamentally opposed to ear cropping under any circumstances. We’re going to take a look at what exactly ear cropping is, why people do it and whether it’s necessary or even harmful to the dog. In particular, we’re looking at the cropping of Pitbull’s ears.

What is ear cropping?

Unfortunately, it’s exactly what it sounds like. Breeders or owners will trim the dog’s ears so that they no longer lie flat; they stand up and are usually pointy.

This elective procedure can be done by willing veterinarians. It has to be done when the dog is a puppy, usually between 7 and 12 weeks and about ⅔ of the ear is cut off. The dog will be under anesthesia, however often when ear cropping is performed the dogs aren’t given adequate pain relief.

During the surgery, the floppy part of the ear is cut away, along with the blood supply and nerve endings that are abundant in Pitbull’s ears. It is then stitched and bandaged until the ears are healed. They may need to be bandaged for weeks after surgery though, to ensure the ears stand up in the way owners want them to. Even then, there is no guarantee with this kind of surgery.

Why do people crop Pitbull’s ears?

Breeders only crop Pitbull’s ears to make them look more intimidating and threatening. It’s an aesthetic and buyers want their dogs to look a certain way.

Is there any benefit to cropping a dog’s ears?

There is no recognized benefit to cropping a dog’s ears. It is seen as an elective, aesthetic surgery with no medical benefits. Although this is the case, it is believed by many breeders and owners that it has benefits like better hearing for hunting.

Is it cruel to crop a dog’s ears?

Some people feel like if they take their dog to the vets to get their ears cropped that it’s not cruel because they’re put under general anesthesia. This is a nice sentiment, however the dog is still having a huge part of their body amputated from their body. The ears of a dog are so important to them for hearing, communication and protecting against unwanted parasites and bugs, so to take them away can cause the dog some serious problems.

Not only that, but it’s very painful for them, even after the surgery. The ears, especially of Pitbulls, are extremely vascular and hold many nerve endings so when they’re chopped off the dog can experience phantom pains for the rest of his life as well as constant ear sensitivity and pain.

Similarly, if a dog has the ear cropping surgery and the procedure doesn’t work (the ears are still floppy) then some owners have been known to try and correct this themselves, with devastating results. There’s also the usual risk of general anesthesia and infection post-surgery.

Although some people believe they’re helping their dogs to hear better or hunt better, they may actually be hindering them and causing them more pain down the road.

In the United States there is no law against ear-cropping so, yes, it is legal. Each state does have its own rules that have to be followed though. In other parts of the world, this is not the case.

In the UK, for example, ear cropping is illegal under the Animal Welfare Act and any dogs that have had this illegal procedure are banned from entering the Kennel Club competition! For those countries in Europe that have ratified the European Convention for the Protection of Pet Animals, ear cropping is prohibited.

What other breeds get their ears cropped?

Why do people tape dog’s ears?

Some people believe that some dogs ears should be set and carried a certain way. They want the ears to be level with the top of the head and be carried close to the head to add width and strength to the look of the dog’s head. If a puppy has ears that don’t carry close to the head, the owner may tape them for a couple of days to retrain the cartilage to fall a certain way. Sometimes the dog’s ears may move during teething because the puppy pulls its ears back when it’s in pain and the cartilage sets that way. This is said to be a non invasive procedure.

When a dog’s ears are set like this it blocks off most entry to the ear canal which some say reduces the chance of infection because moisture is less likely to get inside, however this isn’t true. Moisture can still get in but it cannot then be dried out with the airflow so dog with ears set like this are more likely to develop an infection. You should check their ears daily and make sure they’re dry after swimming or walking in the rain.

Why are Pitbull’s tails docked?

Pitbulls are known to be used as fighting dogs too, so they may be docked to reduce the ability of the other dog to grab hold of anything. Again, there’s no medical reason for a puppy’s tail to be docked; it’s an aesthetic that some owners prefer.

Should we be cropping our Pitbull’s ears?

Ultimately, people will always have conflicting views on whether a dog’s ears should be cropped. Some will always argue that it is the choice of the owner to crop their dogs ears if they want to, whereas others will fight to make it illegal across the globe.

Personally, because it is not a medical issue and it has zero proven benefits to the dog, I would not want my dog’s ears cropped, nor would I purchase a puppy that had already had theirs cropped. It seems like a lot of unnecessary pain and suffering for the dog for no real reason or gain.

Natural ears make for a less intimidating dog and the softer edges of that look are great for a breed like the pit bull, that has such a misaligned reputation for being vicious and mean.

At the end of the day, we should probably just love those beautiful Pitbulls just how they are!