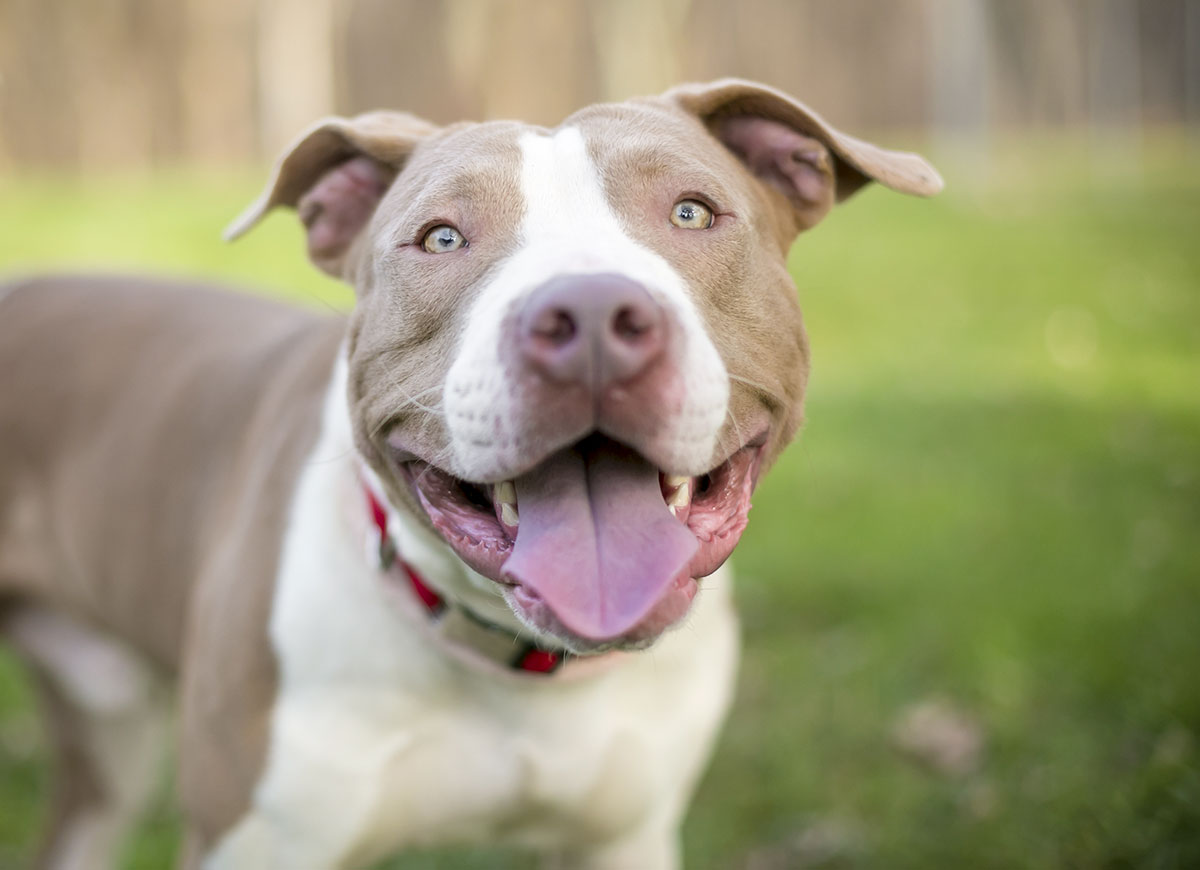 Thinking about adopting your first dog and want a pit bull? Learn more about the breed and what’s required to raise a happy one. There are factors to consider before adopting this lovable breed!.

The History of America’s Favorite Breed

The pit bull breed was created by crossing English bulldogs with terriers. Why? To create dogs used to entertain the masses through bull-baiting, “ratting” and dog fights. Ratting is the sport of throwing rats into a pit and then releasing dogs to hunt and kill them.

Interestingly, though, the breed was not bred to be ferocious. In fact, it was specifically bred with “bite inhibition toward humans” reduced. That way an owner or handler could get into the ring and pull their dog off without injury.

In addition to entertainment, these dogs were also beloved work companions and family pets. They can herd, catch hogs and guard but they are also insanely affectionate. Pit bulls have a strong love of humans.

Why, then, are they known as the dog causing the most human fatalities? First and foremost: people have begun to lump dogs of a certain look (large, square head/short hair) into the catch-all category “pit bull” without actually taking the time to discover if a pit was actually responsible for the injuries.

Second, and sadly, many people love that the breed looks ferocious and can be taught to be mean. They use these dogs as guard dogs but it’s not smart to do so. Pit bulls rely on and love humans and cannot distinguish, once taught to be aggressive toward humans, which humans are good and which are bad. Additionally, people do not take the time to properly train and socialize their dogs, resulting in a dog that may attack. This is a shame, because the breed actually makes a phenomenal pet.

While every dog is different and nurture plays a large role in how each one turns out, there are some personality traits you can expect in a pit bull pup. They are clownish, intelligent, loyal, friendly and strong-willed to the point of stubbornness.

Pitbulls are terriers which means they have a lot of energy. A pit bull should have daily vigorous exercise sessions lasting 30-45 minutes in addition to regular walks. That’s right, vigorous exercise is not walking on a leash. It’s swimming, running, or participating in activities like agility or dock diving. My pit bull gets two leashed neighborhood walks a day to keep up socialization with both people and dogs but he also gets a daily hour of time at our local fenced dog park and weekend hikes off-leash (he is very well-trained and 100% under voice control). When the weather is bad I notice a marked difference in his behavior if we’re not able to get him outside as much. He can get restless and naughty and he also annoys his brothers more, trying to get them to play.

As mentioned earlier, pit bulls really like people. That makes them pretty easy to train! They want to please and they thrive on positive reinforcement. They are a bit strong-willed and can be stubborn so be sure that you’re starting with them from a young age so that they view training as a natural part of life.

While stubborn, pit bulls are like many of us: we can be enticed with the right thing. My pit bull is food motivated, even if it’s just kibbles of his own food he will do almost anything to earn one. Every day I pull out a little from his breakfast and dinner and work with him on whatever trick he’s learning by tossing him a kibble. Once in a while he gets a “jackpot” or no treat at all to make sure that he’s always motivated to work. Pit bulls will learn, very quickly, when they’re not going to get something so don’t fall into patterns.

A recent study looking at various dog breeds’ propensity for aggression found that pit bulls show no proof of being inherently aggressive. Dogs took the standard temperament test. And not just a few dogs. Nearly 900 pit bulls were tested! 86% passed the test.

That’s right, only 14% of pit bulls failed the temperament test.

When Golden Retrievers were tested, they had a pass rate of 85.2%. Does this mean we should also ban goldens? No. Instead we should learn from what the data is telling us: dogs can be aggressive. And dogs can be docile. There is no inherent, genetic or even anecdotal proof that pit bulls default to aggressive behavior.

Can you handle the stereotypes? If you think youʼre tough enough to adopt a Pit Bull, thereʼs something more to consider—public opinion. I have had people cross the street when they see me walking with my pit, and mothers pull their children away from him. The funny thing is that my pit has no interest in people and actually pulls to get away from them. He’s low confidence when it comes to people.

In addition to fearful people on the street, owning a pit bull can also make for problems in your personal life. When I was looking for an apartment in New York City, there were multiple co-ops that banned pit bulls.

Pit bulls make great family pets but, as with all dogs, they do require some consideration. First, if you’re going to be moving in the next 12 years a pit bull might not be the best choice. Many municipalities have ordinances against pit bulls. If you’re someone who rents, pit bulls also aren’t an ideal choice since many landlords do not allow them.

That said, they are great dogs for home owners who have the time to spend exercising them and working with them on socialization. Pit bulls are affectionate and friendly and love children. When worked with from puppy-hood, they can be socialized with other dogs. My pit bull has two brothers: a senior min pin and a two-year-old cat. The three of them are the best of friends and share a water bowl, play together and even nap together.

A pit bull is a a good dog for a first time dog owner but you need to understand what you are getting yourself into. As a fist time dog owner, it will take work to learn how to properly raise a dog and with a pit it may require a little extra effort.

As long as your willing to research the breed, train it properly, safely expose the dog to people and other dogs, and give it the exercise it needs, they can be wonderful first time dogs.