Imagine a dog as wrinkly as a Shar Pei but as big as a mastiff. Scratch that – bigger. Enter the American Molossus. A gigantic dog whose name coincidentally rhyme with colossus, it’s simultaneously a very old and very new breed.

“Molossus” is a general term for a type of domestic dog. It’s hard to define as it technically doesn’t exist anymore.

Some stories say that mastiffs are the direct descendants of the Molossus, which explain why the American Molossus certainly looks similar. Others, though, use the terms “molossoid” or “molosser” to further define certain types of any breed (from Boxers to Leonbergers) and further the confusion.

What’s most obvious is that these dogs are big. We mean really big. The version we’re talking about here is the American Molossus: a hefty specimen whose sturdy body will impress even those familiar with Great Danes and English mastiffs.

It’s known for supremely wrinkled face, jowls, and neck, and a larger-than-life stature. It’s not recognized by the AKC, but breeders and admirers of the dog recognize it as its own breed.

History of the Molossus

Look to antiquity for the origin of this famous dog. The Molossus is well known throughout ancient literature. Kept by ancient Greeks (from Molossia, of course), these canines feature in writings of some of the most well-known poets and philosophers in history; Horace, Seneca, and Virgil are only a few of the men who refer to these ancient dogs.

Aristotle himself mentions the name Molossus, but is one who refers to it more as a type of dog rather than a distinct breed. The Molossians went so far as to immortalize their namesake dogs on their money, issuing its likeness in silver coins.

Wonder surrounds these dogs as one legend ties it in with Alexander the Great, a son of a Molossi princess, who allegedly discovered these dogs on his journeys in Asia and shipped them back westward.

In ancient times, the Molossus was prized for its skills as a guard dog. The Roman army took it into its service, breeding them for exactly that purpose.

Today, breeders love to reference the Molossus’ heroic history as a credential for being a great family guard dog. Back in the day they were also used for help on the farm in herding livestock.

By official records, the Molossus is officially recorded as extinct. It is for this reason that there is much debate around its resurgence. In all the written evidence of the Molossus that has survived, none go into detail to describe the dog physically, nor provide a sketch of it.

The Jennings Dog is a Roman replica made hundreds of years after the Greek original. It’s been deemed a Molossus by guesswork, simply because the Greeks from the time the original bronze statue was made (estimated 2nd century B.C.) praised the Molossus. The Jennings Dog, however, looks more like a sheepdog than a mastiff. Hence the mystery of what a true Molossus should look like.

Throughout the 20th century, attempts to recreate the Molossus have been made across Italy. 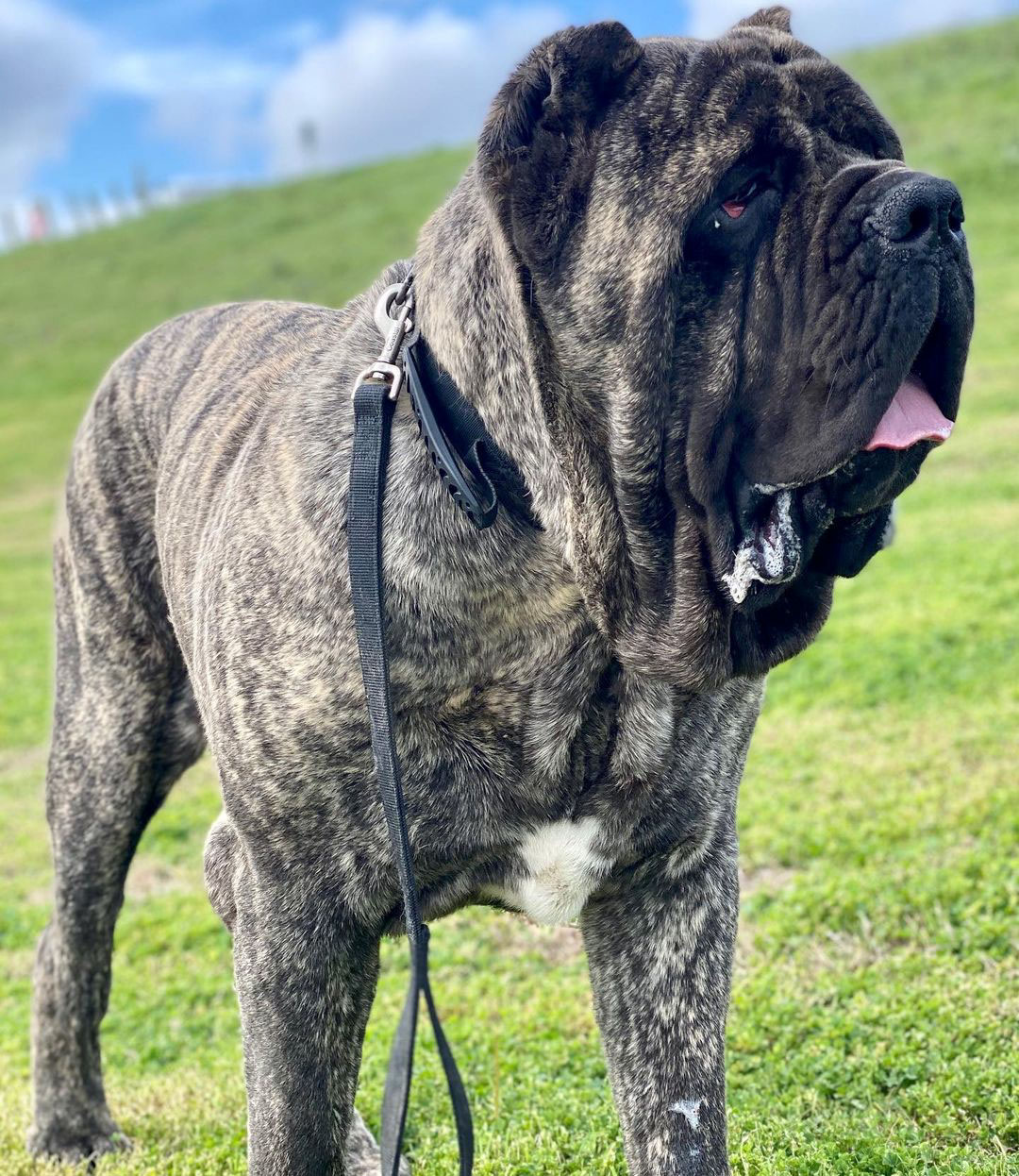 Today, American breeders claim to have resurrected the famous Greek dog and officially call it the American Molossus. The cross of Neapolitan mastiffs with other mastiffs has produced what breeders claim to be the original, though it should be noted (as discussed above) that there’s not enough evidence to define the original Molossus. The American Molossus could be nothing like the dog from Aristotle’s writings – we may never know.

The current Breed Standard for the American Molossus, as set out by the American Dog Federation (ADF), measures the dog at a shoulder height of 27 to 35 inches depending on its gender. They tend to measure 31 to 40 inches long and weigh an average of 200 pounds!

It’s hard to average a lifespan as the “old” breed is so new. Bigger dogs usually have shorter lifespans than smaller dogs, though, topping out around 10 years. The American Molossus Kennel Club (AMKC-1) (there are two organizations of this name) lists the lifespan goal to be 10-12 years.

A dog is as dangerous as it’s taught to be. As with any guard dog, an American Molossus can be taught to be dangerous.

Poor or meanspirited training can cause them to be a veritable force to be reckoned with, given their size.

Their temperament, however, doesn’t suggest they would naturally act this way. The most likely reason they’re valued as guard dogs is because of their intimidating size. They probably don’t even have to bark to scare off any unwanted guests – one glimpse of them would be enough to scare off anyone with bad intentions.

The American Molossus is regarded as a gentle giant. As mentioned, they may be trained to be guard dogs but they’re still man’s best friend at heart.

They’re certainly not quick dogs, with so much weight to carry around, so they tend to be more watchful and observant of situations. Like almost all dogs, the American Molossus is known to be loyal and protective of its owner.

It’s universally agreed that the American Molossus is an outdoor dog. Not to say there’s no house big enough to hold them, but they’re usually trained as guard dogs and thus are unlikely to curl up on your recliner. They’re probably twice the size of it, anyway.

Their size gives them the need for lots of exercise. It’s recommended to take them out for walks twice a day so they can exert enough energy.

There isn’t a dog breed on the planet that’s free from health issues. They tend to get worse, though, the larger the dog is. Add in the fact that this is a rare and limited breed and you’re facing some worrisome health concerns.

The American Molossus is prone to inherited diseases linked to its size.

Spondylosis is a degenerative disease that can cause the vertebrae of its spine to fuse and cause pain and lameness.

Wobblers Syndrome is a another possible deformation of the spine that puts pressure on the nerves of the dog’s neck and spine. Such an abnormal size will have its consequences.

The dog is also prone to problems with its bladder, joints, kidneys, sight, and overall development.

The American Molossus is generally accepted as an intelligent dog prone to good training. It wouldn’t be used as a guard dog otherwise.

With all big dogs, a warning comes with their size and a naivete of their own strength. It isn’t the best idea to let something so large and powerful loose around small children.

Kids don’t always have a keen sense of self-preservation, and the gentlest giant can forget its own strength. For this reason, its best to avoid play between the two. Even older kids and adults may struggle with the American Molossus. It’s a dog that needs strong handling from able-bodied trainers.

Cooperation between different breeds of dogs always comes with good training on your part.

If you own more than one dog, it’s always best to introduce a new member of the family at a young age. Puppies are the easiest to train to play nice with others. Otherwise, if you’re intent on introducing a mature dog to your family, take the time to be vigilant in training it to behave.

It should be pretty obvious that an American Molossus is not ideal for a first-time dog owner. For someone not accustomed to daily walks or preparing food, this dog is not really the way to go.

They require loads of exercise and huge amounts of food to support their body weight. Not to mention being able to maintain their bodyweight yourself when taking them out for walks. They look lazy but can work up quite a trot.

How Much Does An American Molossus Cost?

Depending on the breeder, American Molossus puppies start at $6,500, perhaps the highest price for a puppy we’ve seen yet. That’s not including shipping, either, as they sell their dogs internationally.

It’ll cost an extra $550 within the U.S. and even more to go abroad. Breeders ask for a non-refundable $650 deposit. Plus, there’s a waiting list.

There are a few breeders who boast this colossal dog. It seems like Marcus Curtis has a monopoly on the Molossus, having written the current Breed Standard as accepted by the ADF, having founded AMKC-1, and running two different breed websites.

(One is technically for Mastinos, but seems to have all the same information on the American Molossus and the Molossus lineage.)

There’s also another American Molossus Kennel (AMKC-2) club run by a different group of people who seem to provide the same information and Breed Standard, but advertise different breeders. AMKC-2 covers the Midwest while AMKC-1 operates out of California.

The American Molossus is a curious breed. Not recognized by the usual societies and hardly defined as its own breed, its existence raises a lot of questions and controversy. The appeal of such a distinct dog is understandable. We can only hope that in time more research is done into the rearing of this new breed.