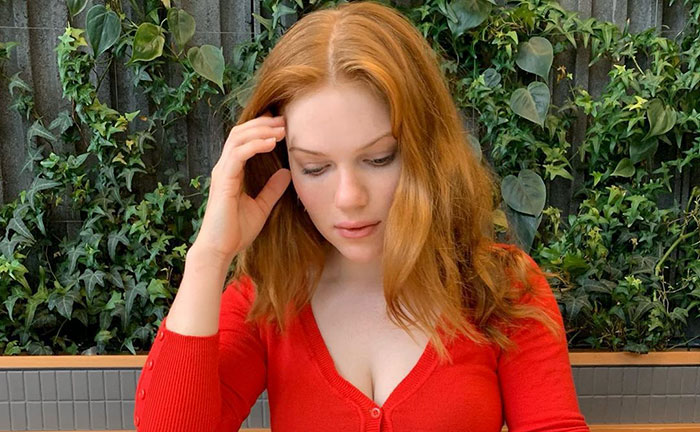 Levi Coralynn is a Canadian model, artist, content creator and social media personality who has amassed millions of followers on social media.

Levi was born on January 2, 1998 in a small town in southern Alberta. Levi refers to it as a ‘small ass hick town’ that ‘smells like shit’.

Sometimes I wonder if my profession/social media presence caused me to become more ace? I don’t talk about my sexuality often because the times I do open up about it people usually can’t comprehend that someone who exerts a lot of sexual energy doesn’t desire sex.

When asked if she would ever consider getting a sugar daddy, Levi says she would consider it if only it was a ‘platonic sugar daddy.’

Levi has an OnlyFans. When she first started her OnlyFans, she only posted lewd and implied nude photos, but now she has seen the light and does in fact post nude photos.

Levi started a podcast called ‘why not with levi‘ on Jan. 28, 2021. On the podcast she talks about random happenings in her life and reads off her diary entries.

Here is one of her diary entries:

February 2 2021. Hello again. Today is Tuesday. And I woke up at 8am to a Skype call from my younger sister Ella. I should have ignored her but I couldn’t, I enjoy talking to her too much. She recently turned seven. She calls me on skype almost every day. Sometimes twice, sometimes three times. As annoying as it can be. It makes me so happy that she calls so often because I know there will be a day when these calls will stop.

I’ve always loved children. And I asked Ella if she thinks I’m cool. And she said yes. So I said why. She said because I am fun and I still like to play. All the adults that she knows doesn’t put doesn’t play anymore. And it makes me realize how much I wish adults still played once last year to be exact. I wanted my winter walks. I passed a playground and I kept staring at this park reminiscing about recess playing tag with scabby knees and dirty sticky hands. And I began to question why play stops.

Okay, and so this is what I decided to do. I started to play on the playground, I swing, I climbed and I attempted to do the monkey bars, which I don’t know if you’ve recently tried to do monkey bars, but they are. They make you feel old and weak. And I even ate snow that day. The hardest thing wasn’t playing. But feeling like a complete weirdo when people walk their dogs past this little redhead, playing and I wonder if they wanted to join me. Luckily, I’m five-nothing so I feel like I can get away with doing most things.

Ella might be having a sleepover soon. I haven’t seen her at all much this year due to COVID. And I ordered her a birthday present a mini makeup kit, which I think she will love. We have a huge age gap, as I’m sure you have assumed people think she’s my daughter forever in public. And I love this age difference. I love it. I love having this gap between me and my sister is it’s nice to have someone to play on the playground with and not look insane. And it’s funny to me that the person I talked to the most happens to be a seven year old. Anyways, I need to go get do my laundry. I hate laundry. I really do. In fact, I hate it so much that I want to save doing my laundry for when my sister comes in pay her $5 to do it. But perhaps this would be a rude thing to do. Talk later February 15 2021.

Levi also shared a story on her podcast about losing her virginity.

There was a boy, there was a boy. And I’m not gonna say his name, but how did I even I don’t even understand how it happened. I started seeing this boy. Because at one party I got, well, I got, I got drunk. I was either 15 or 16. And so I kept seeing this boy. And he was kind of, I think I was attracted to him because he was like a bad boy.

I knew him when I was going to church. My family was really into church for a while and his family was very into the church. And I thought he was I liked this boy, the moment I think I was probably I was very young when I first was attracted to this young boy and I thought he was so beautiful. I would see him at church and I just would cannot believe that like, such a beautiful boy existed. So I had this was even before I had this is probably when I was 11 or so when I first saw this boy and I just idolized him. I could not believe that such a sweet that I got to stare at.

Anyway, years past this. This sweet Christian boy becomes not so sweet. And becomes just like a rebel. He’s a bad boy. I think I’m also I also went from being a cute little sweet Christian, quiet girl, to now being a sweet, quiet. Not Christian girl, but just kind of I went through my phase. You know that rebellion stage? Fuck you, mom, fuck you, dad. I want to live my life.

So we were at this party. And it was one of the first parties I ever been to. This was this might have been like my third time ever drinking. And I see him at the party. And I just knew that I wanted him. We were both drinking and we ended up making out in his truck outside of the party.

So I started seeing this bad boy, who I am just infatuated with was infatuated with and it’s not a romantic virginity story. I think he might have been like my second kiss as well. Anyway, we are starting to see each other and we message back and forth. And we started to form a thing.

I was starting to get anxious because I was the only one in my friend group who wasn’t having sex. I always was friends with the older kids. They would share these stories about, you know, that having sex and it just felt like something I wasn’t a part of, because I was still a virgin. And for some reason, I was very embarrassed about that, which looking back at that, that is so silly. I wish I didn’t feel that way.

And I remember I’m like, Oh my gosh, I’m still going to be a virgin at 16. And so I made it my mission. I was like, Oh my God, I need to have sex before one month to lose my virginity. Which is so messed up that I was thinking like that. And I hope you know that. You don’t ever have to lose your virginity ever. And especially not at that young age. But I felt the pressure.

We went to the movies together. We were making out in the back of the movie. We left the movie theater. We drove off, we drove off into the outskirts of the city and drove into a random farmers farmer’s field. And basically I lost my virginity in a truck in a farmer’s field. And we were listening to Kings of Leon’s ‘Sex On Fire.’ And the sex wasn’t on fire.

Losing your virginity is probably the worst sex you’ll ever have. Because I didn’t really know at at all what I was doing or what it should be like.

And yeah, it was overrated. And I remember going home and being like, Oh, that was it. That’s what I’ve been like. Waiting for my like, entire life. It’s kind of disappointing.

I think sex most definitely gets better after that. But your first time is, you don’t know what you’re doing. And yeah, that was it. And then I got dropped off at home. And I it’s funny because I didn’t even tell my friends for a very long time. And I remember them being upset with me because I hadn’t told them immediately. But for some reason I wanted to keep it a secret.

Levi mentions that she has an unhealthy addiction to Tetrist and has achieved a high score of over 90,000.

The celebrities that she often is compared to is Christine Hendricks and Laura Prepon.