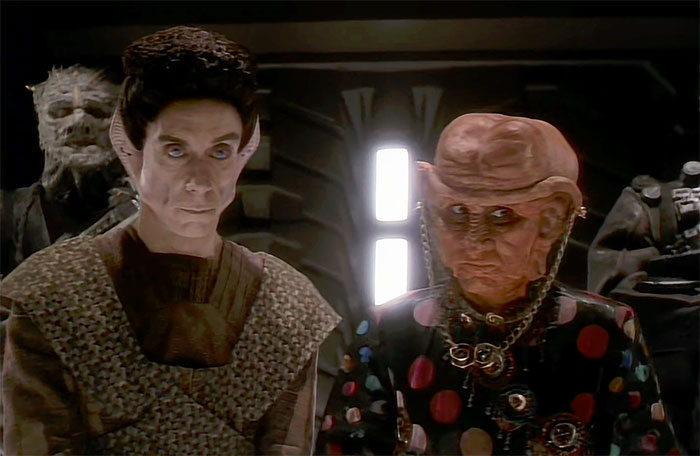 Rock n’ roll fans know Iggy Pop as an eccentric, outrageous performer responsible for innovating punk music and putting on some of the most legendary live shows ever, but do they know the over-the-top singer-songwriter also appeared as a Vorta on Star Trek: Deep Space Nine?

That’s right. The “Godfather of Punk” himself was a “passenger” aboard the space station Deep Space Nine back in 1997. Who was he? What did he do? How did it all come about? Read on for more!

Who is Iggy Pop? 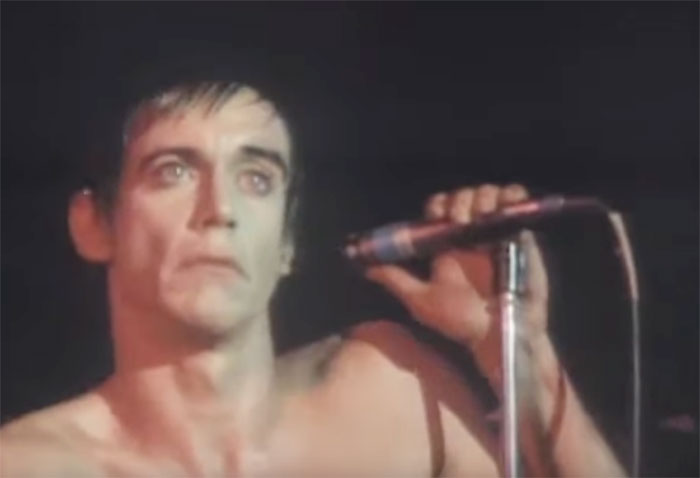 He enjoyed a successful run as the singer of The Stooges between 1967 and 1974, and the band is often given distinction as one of the seminal acts in punk rock.

Their music would go on to influence acts such as Sex Pistols, The Smiths, and Nirvana. Iggy Pop himself would earn the nickname “Godfather of Punk” for his work with The Stooges.

After The Stooges broke up, Pop launched a solo career, starting with his 1977 release Lust for Life. Pop’s solo career, like his work with The Stooges, was also commercially successful and would influence later post-punk bands including Depeche Mode, Joy Division, and Nine Inch Nails.

Iggy Pop and The Stooges were inducted into the Rock and Roll Hall of Fame in 2010, and Pop received a Grammy Lifetime Achievement Award in 2020.

How did he end up on the show? 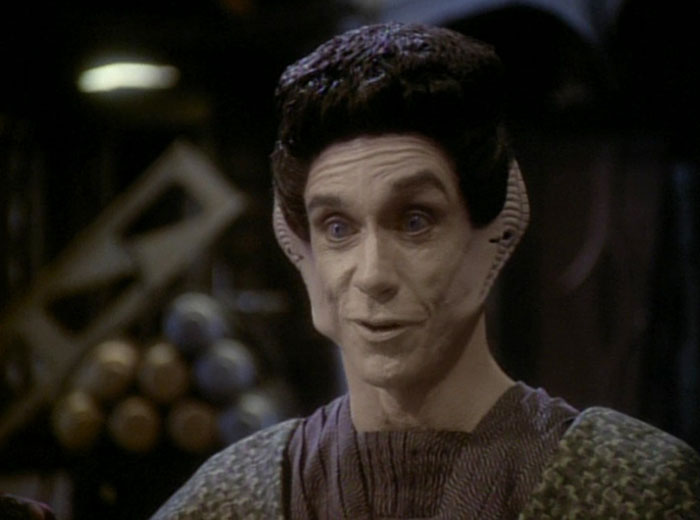 Star Trek producer Ira Steven Behr was an avid fan of Iggy Pop and reached out personally to see if the rock star would be interested in guest starring in a Star Trek: Deep Space Nine Season 3 episode entitled “Past Tense.”

Pop was unavailable, but the stars would align in Season 6 for an episode called “The Magnificent Ferengi” in which Pop would portray a Vorta named Yelgrun.

In “The Magnificent Ferengi,” Quark’s mother Ishka is kidnapped by the Dominion and Quark, Rom, and Nog are tasked with getting her back.

They briefly consider liberating Ishka by force, but realize their strengths lie in negotiation rather than physical combat. 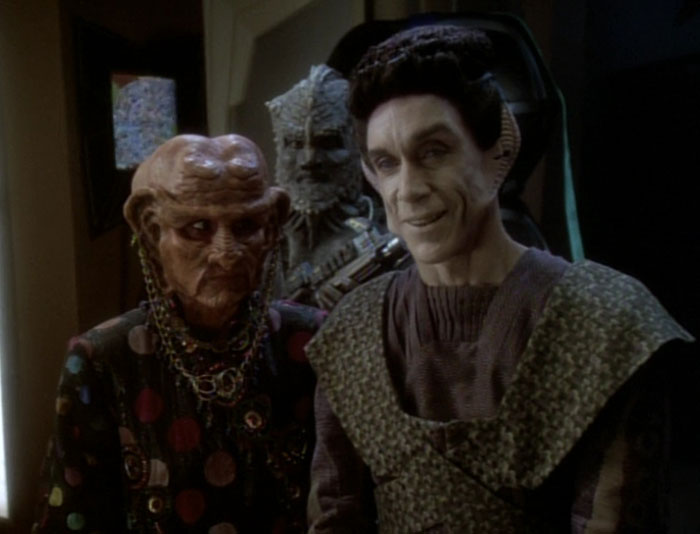 Instead, the Ferengi decide to use a captured Vorta named Keevan as their bargaining chip and meet with none other than Iggy Pop himself as Yelgrun, along with his two Jem’Hadar guards and Ishka.

Quark and Yelgrun agree to trade Keevan for Ishka but, as the exchange is prepared, the Ferengi accidentally kill Keevan.

Using stimulants to animate Keevan’s corpse, they attempt to fool Yelgrun, but it backfires and leads to a brief shootout in which the Ferengi retreat safely both with Ishka and Yelgrun in tow.

At the end of the episode, Quark has successfully rescued Ishka and Iggy Pop’s Yelgrun is handed over to Starfleet in exchange for accidentally getting their previous prisoner, Keevan, killed.

Behr was elated to have Iggy Pop aboard for a guest appearance, but kicked himself for casting the legendary performer, known for his outrageous stage antics, as a Vorta negotiator.

“His physicality is certainly part of who he is, and unfortunately we cast him as a Vorta, one of the most immobile of characters,” Behr said in an interview.

Although he would’ve preferred Pop in more action sequences, Behr overall applauded the performance nonetheless. “He really got that demented quality the Vorta have, like Weyoun has – think Caligula!” said Behr. “He was just a delight.”

The fan reaction to seeing the “Godfather of Punk” portray a Vorta was overall positive. Although Pop’s energy was subdued, fans commonly reference the quiet almost condescending confidence present in his tone and posture.

As one fan put it, “Only Iggy could make a Vorta someone who you would want to drink a beer with.”

Other Rock Stars who appeared on Star Trek

Iggy Pop also wasn’t the only rock star to appear on a Star Trek series. 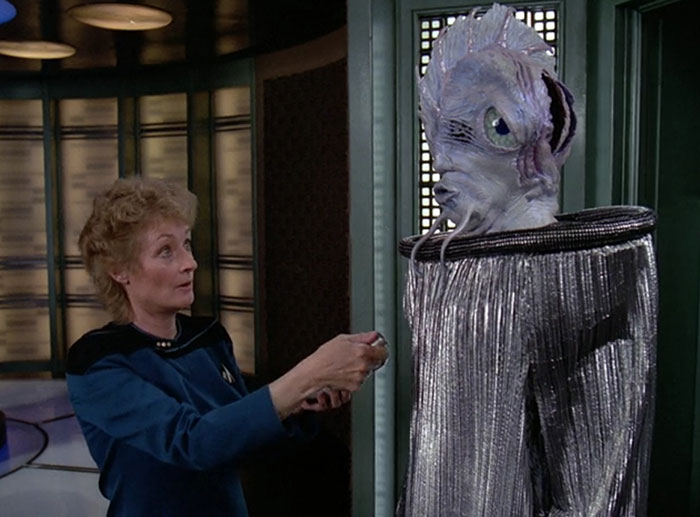 Mick Fleetwood, founding member and drummer of Fleetwood Mac, appeared in a Star Trek: The Next Generation episode entitled “Manhunt.”

After the starship Enterprise is ordered to escort two Antedean ambassadors to an important conference, Mick Fleetwood appears as one of the fish-headed aliens. He and his compatriot are eventually discovered as assassins and taken into detainment. 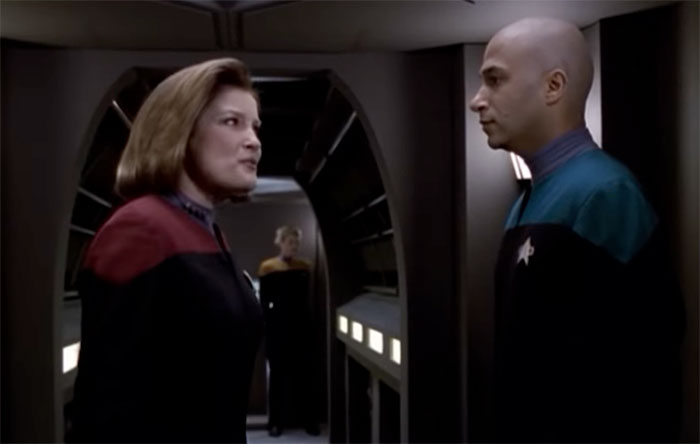 Tom Morello, guitarist of Rage Against the Machine and Audioslave, also appeared on an episode of Star Trek: Voyager as Crewman Mitchell, a junction operator aboard the Voyager.

Although his appearance is brief and he has few lines, producer Rick Berman said, “He did a great job. It was a little pick-me-up for everyone.”