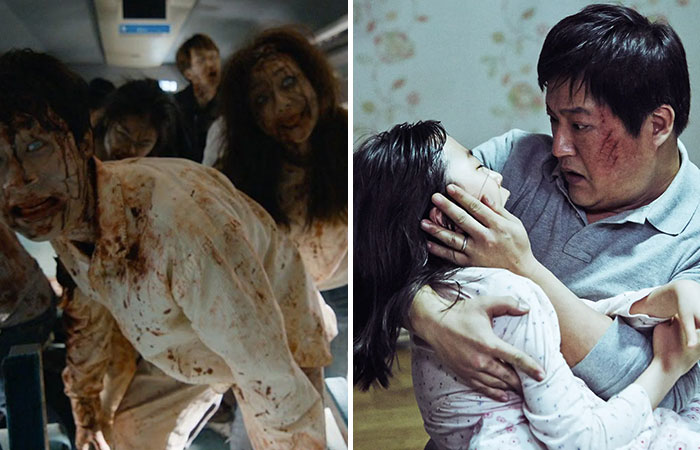 Do movies about zombies running around on trains peak your curiosity? What about demon possession mysteries? Maybe you like moody meditations on despair, suffering, and revenge . . . plus vampires and ghosts! If so, the Korean horror genre might be right for you!

For the last three decades, South Korea’s international presence in the film industry has been steadily increasing thanks largely to the success of thrillers like Parasite and groundbreaking series like Squid Game. Let’s look at five movies that are sure to delight newcomers to their terrifying tales just as they have become classics for fans of Korean horror. 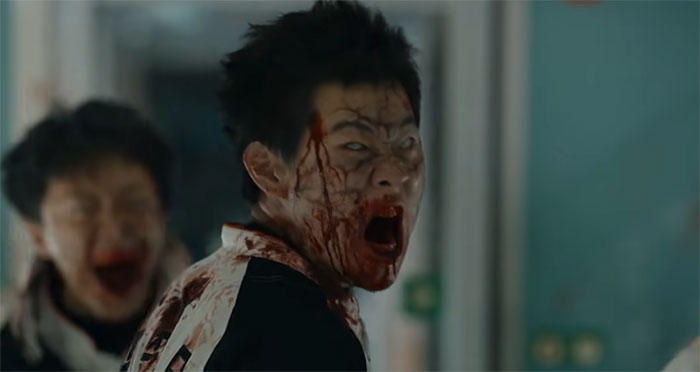 You can’t have a list like this without Train to Busan. This movie is a rarity, to be sure–an uber-bloody zombie flick that dominated box offices in South Korea and became a true instant classic in the United States.

The film follows Seok-woo, a jaded businessman and divorced father who takes his daughter Su-an on a train trip to the city of Busan to visit her mother on her birthday.

As the film establishes Seok-woo’s disconnect from his daughter, there are subtle hints of society beginning to collapse around them. Emergency vehicles dart by, urgent news stories relay sudden chaos and confusion. These are the apocalyptic hallmarks that warn the audience to prepare for what I call the “zombie moment,” when all sense of normalcy is shattered and replaced by living dead madness.

I will never forget watching Busan for the first time from the safety of my living room–blanket tucked tightly around me, my dog resting her head in my lap. It not only freaked me out, but it also made me laugh and cry.

From the moment the first zombie twists its way off the floor to give chase to horrified train passengers, you know there is something special about Busan.

The way the zombies move, contorting themselves into unnatural poses, amps up the creep factor, and to top it all off, they are fast zombies! Even though the actors playing these brain-hungry ghouls learned to control their bodily movements by “bone-breaking” dance innovator Jeon Young there are no musical numbers to be found in this movie! Only a non-stop terror train with zombies as Seok-woo attempts to keep his daughter safe.

Horror comedies like Zombieland tend to embrace post-apocalyptic absurdity while classics like George Romero’s Dead series make audiences empathize with characters while also contending with racism, consumerism, class conflict and global warfare. Busan merges both of these approaches seamlessly, delivering unusually impactful characters for a zombie flick. Tissues are required when viewing this one! 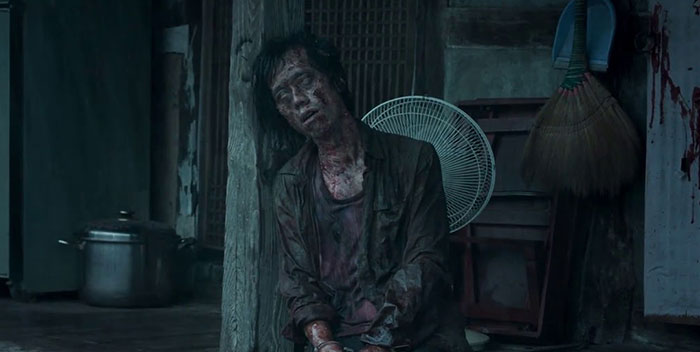 Besides Busan, The Wailing is one of the most critically praised and beloved horror films of the last decade.

It tells the story of a police officer, Jong-goo, who investigates an unusual and mysterious illness affecting local villagers after a suspicious man comes to town. When the infected begin murdering members of their own family, the mystery deepens and Jong-goo’s investigation leads him to question the stranger, and he begins uncovering a dark web of demonic rituals and possession.

The film boasts beautiful cinematography and a powerful score that highlights the unsettling nature of events that unfold. In an especially creepy moment, a hunter falls in the woods and happens upon the stranger, played by Japanese film star Jun Kunimura, as he is eating a deer corpse. When the stranger notices him, the hunter hides behind a rock and watches as the man abandons the deer corpse and disappears. Moments later, he emerges, demon eyes burning bright red, crawls over the rock, and, arm outstretched, stares menacingly into the camera, never failing to meet the audience’s increasingly uncomfortable gaze as he gets closer and closer.

With virtuoso performances by Kwak Do-won and Jun Kunimura, The Wailing is truly a movie you don’t want to miss! 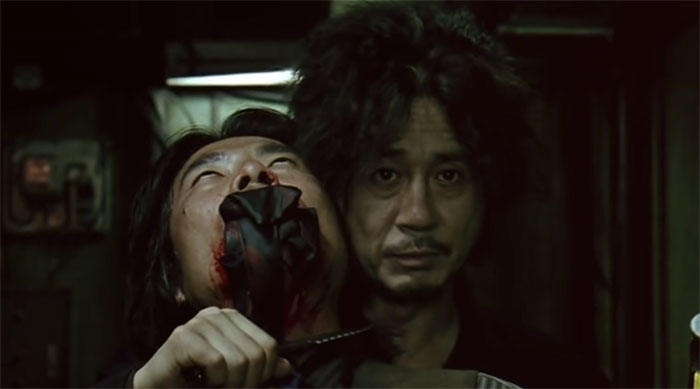 Although many moviegoers consider Oldboy an action thriller, many horror fans agree that it is one of the most disturbing Korean films ever! This brutal story of revenge definitely deserves to be included on a list like this, if only for its truly horrific revelations that come to light throughout the course of the narrative.

A man, Oh Dae-Su, is kidnapped and imprisoned for 15 years. When he is released, he seeks revenge on his captors and becomes romantically involved with a sushi chef named Mi-do.

As Oh navigates his newfound freedom, he struggles with the emotional repercussions of his wife’s murder as well as the loss of his daughter who had been adopted by another family during his imprisonment. The plot flows through its dark themes of penance, humiliation, and the complexities of revenge as well as its visceral horror imagery–this movie is not for the faint of heart!

One of the most shocking moments happens when Oh finally gains his freedom. He walks into a restaurant and eats a rather large (live) octopus. More shocking is perhaps the fact that actor Choi Min-sik actually ate four live octopi while filming this scene despite being a vegetarian. Now that’s commitment to your craft!

This movie really has it all: Murder, dismemberment, Achilles heel-slashing, guillotine defenestration, and cannibalism. Proceed with caution! Choi Min-sik returned to the revenge horror genre for I Saw The Devil, but instead of seeking revenge, he is the object of the main character’s bloodlust.

Kim Soo-hyun (Lee Byung-Hun) is an intelligence officer tracking down a serial killer (Choi Min-sik) in order to exact violent vengeance for the brutal murder and dismemberment of his fiance.

Throughout the course of the film, Soo-hyun continuously captures, tortures, and injures the killer, eventually inserting a GPS tracker into his body so that he can hunt him down again and again right up until the movie’s terrifying and painful climax! 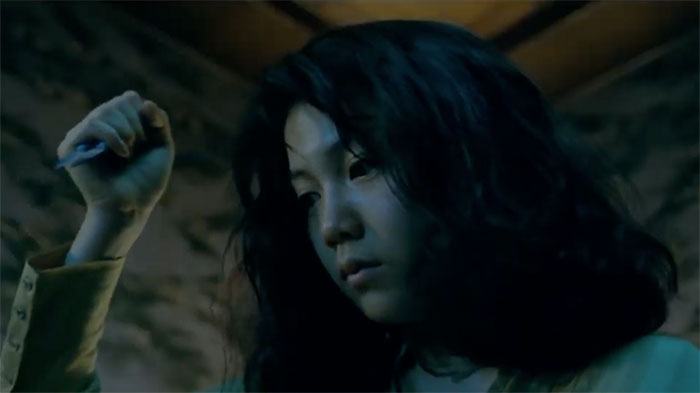 Oldboy’s director Park Chan-wook returned to horror for this vampire love story about a catholic priest (Song Kang-ho) questioning his faith who volunteers for an experimental vaccine that fails. He subsequently becomes infected with a life-threatening disease.

However, his unexpected and quick recovery attracts new followers to his congregation, and it seems the priest has found a new lease on life . . . until the illness suddenly returns, and he is astonished to discover that he has turned into a vampire! Things become even more complicated when he falls for the wife of his childhood friend who also wants to become a vampire! Life and un-death are really complicated.

Critics and audiences love the originality of Park Chan-wook’s work in the horror genre, and Thirst is no exception!

There have been talks about potentially remaking Busan, I Saw The Devil, and The Wailing as Hollywood films; Spike Lee himself remade Oldboy in 2013.

I say leave these excellent movies alone! Instead, let’s extoll their individual virtues and continue to share them with the next generation of horror movie fans! Whether its zombies, serial killers, or the devil itself, Korean horror allows its audiences what all good horror does–the chance to face what scares us most and see how we come out after.

11 Disturbing Lines From Horror Movies That Shook Viewers To The CoreThe 8 Most Anticipated Horror Movies of 20236 Recent Horror Movies That Deserve Cult Classic Status9 Horror Movie Cliches That Need To Die Already7 Movies That Will Leave You Asking 'WTF Happened?'She Played 'Persephone' in The Matrix Movies. See Monica Bellucci Now…8 Exciting Sci-Fi and Fantasy Movies to Look Forward to in 20235 Video Game Movies That Don’t Suck5 Actors That Went All Out In Terrible Movies