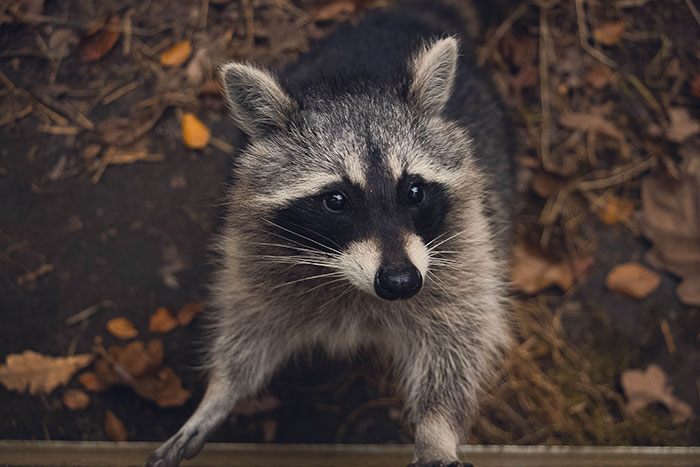 Raccoons are common in many local wildlife populations throughout the world. These crafty critters are some of the most adaptable animals, able to survive in both the wild and urban environments, as well as many different continents- a feat not seen in many species. Due to their adaptability, they are one of only a few species that have actually benefited from the exponential growth of the human race.

They have learned to scavenge and coexist alongside humans, using their resources and leftovers to survive. Often, suburban raccoons are even more clever than their wild counterparts. These city dwellers have evolved to constantly outsmart and circumvent human inventions, such as traffic and trash cans.

A psychologist from York University outfitted several raccoons with GPS and observed they had learned to avoid major intersections as well as open secure trash cans in order to obtain food. Their intelligence and resourcefulness has shown a growth rate parallel to that of human invention. Humans are continually reevaluating ways to deter raccoons and these smart mammals continue to overcome the challenges posed to them.

The name of the species itself comes from the dexterous use of these creatures’ hands. Raccoon originated from the Powhatan word aroughcun, which translates to “animal that scratches with its hands.” Their fore-paws are an important part of their survival. They have four times more sensory receptors than their back paws. This sensitivity enables them to find food and other basic needs, particularly at night.

We can liken their ‘seeing’ with their hands to a dolphin’s use of sonar or a dog’s exceptional sense of smell. As nocturnal animals, they are most active at night, and can use their sense of touch to determine whether an object is edible or not.

Are raccoons smarter than cats and dogs?

Clever and cunning, raccoons IQ has been found to be greater than a cat and just below a monkey on the mammal IQ scale. Monkeys are generally found to score just below a human, making them the next highest score when considering IQ.

This concludes that raccoons are closer to human intelligence than may have been expected.

Recent studies have considered the number of neurons in the cerebral cortex to be a factor in considering intelligence. Researchers at Vanderbilt University studied the brains of cats and dogs, finding that at 530 million neurons, dogs had about twice as many neurons as cats. For comparison, humans have about 16 billion neurons.

When studying raccoons, considered by many to be vermin, researchers found that if you were to solely look at brain size and neuron numbers, you might assume you were identifying a small primate- mammals that are, as aforementioned, just below humans on the IQ scale. Based on the number of neurons, as well as an IQ test, raccoons are found to be smarter than both cats and dogs.

In several problem solving experiments conducted, researchers have found that raccoons often solve the test in innovative ways. The classic Aesop Fable test determines cause and effect processing by observing whether animals can learn to displace water in order to obtain food.

For example, a container has a marshmallow floating on water levels too low to access. Researchers demonstrate to the animal participants that dropping stones into the water will increase its level, thus making the treat reachable. Several raccoons observed and replicated, while some simply circumvented the ‘recommended’ method, knocking over the container to grab the marshmallow.

(Related: How Smart Are Pigeons?)

Do raccoons have good memories?

Another experiment tested memory in several different species. A delicious treat was shown to be placed behind one of three doors, followed by a period of delay before encouraging the animal to decide which door the treat was behind. Dogs and rats would often choose correctly, but only if they were able to focus on the door throughout the delay. Raccoons and small children, on the other hand, could remember the correct door even when distracted during the period of pause.

Raccoons have been considered pests for many years by humans. Though sometimes seemingly invasive, these animals are intellectually beyond common pests, such as cockroaches or small rodents, and have shown their cleverness is a significant part of their species growth and survival. Their intelligence levels have proven to be quite surprising, falling not far behind primates, and thus, humans. This brain capacity combined with their resourcefulness has allowed this incredible species to flourish throughout the world.