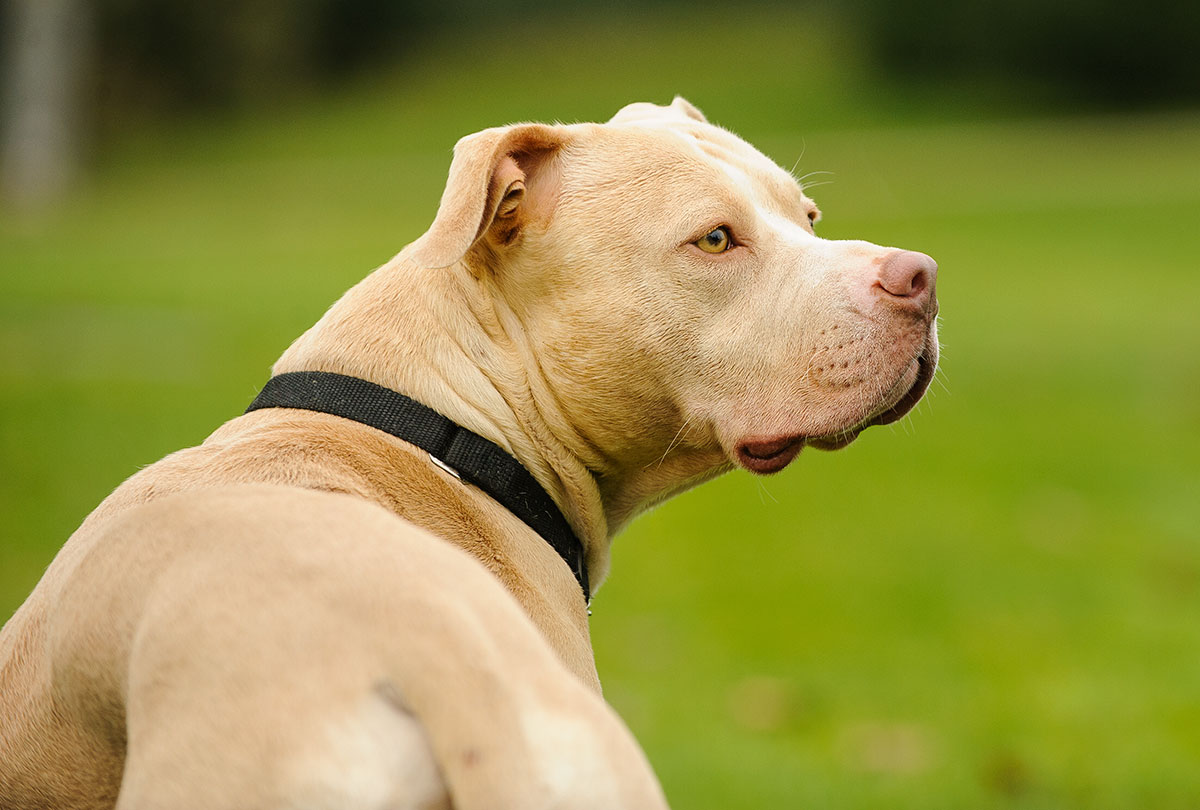 Before pit bull fans take offense or pit bull haters nod their heads too vigorously, we want to say this isn’t because these dogs are inherently dangerous or violent. The problem isn’t pit bulls, the problem is dog parks. In an ideal world, dog parks are wonderful places, full of universally well behaved and expertly trained dogs who are always accompanied by extremely vigilant owners who know their pets intimately and stay alert for any sign of trouble. If you find a park like this, do take your pit bull after all, and send us the address because this place is truly one in a million.

However, the likelihood is that your dog park is frequented by at least one or two careless owners who haven’t taught their dogs proper discipline and/or get so busy chatting with friends that they don’t notice the telltale signs of anxiety or defensiveness that can build up. If you bring your pit bull into a dog park after one of these dogs has been wound up to a point of pent up aggression, then a fight is on the cards. And, as already established, the pit bull will ALWAYS be blamed.

Pit Bulls Were Bred for Aggression

We also have to face some facts here. While well trained pit bulls are among the most human-friendly dogs you can find, historically they were bred to attack bulls, rats and – yes – other dogs. Pro-pit bull websites may write “pit bull aggression towards other dogs is becoming a thing of the past”, but it isn’t always true, and pit bulls – just like any other dog – may snap without warning, especially if they feel provoked.

It’s true that there are some excellent techniques to break up dog fights. The best owners will be able to use voice commands to control their dog in most scenarios, and a wise pit bull owner should consider carrying a breakstick. This tool can be used to insert into a dog’s jaw during a fight and break that legendary grip while you regain control. Unfortunately, even if your own discipline is excellent and you do carry a breakstick, there’s always the chance that if a smaller dog should attack, the pit bull’s response may be so rapidly disabling or fatal that you never get the chance to use it.

It is simply unwise to expose pit bulls to strange dogs in an environment you cannot control, and a dog park is probably the definition of an uncontrollable environment. You never know when an inexperienced owner might show up with a puppy who hasn’t yet learned when is a good time for a little bit of playful nipping and when is a very bad time. Pit bulls may not start fights, but they will usually finish them and then – of course – the pit bull will be the one blamed.

This whole subject is of course hotly debated on the Internet. Some pit bull owners report never having had any problems, and think that dog parks have been a brilliant tool for socializing their pet with others. “Why”, they ask, “should my dog suffer because of what other pit bulls have done in the past?” The answer is simple: it only takes one unruly dog to change a dynamic and provoke a fight, and good luck doesn’t last forever. Another dog may even be injured accidentally when a pit bull is simply trying to subdue it, but guess what? The pit bull will still be blamed.

This brings us to the most important part of this debate. Almost all pit bull owners get frustrated at the bad reputation their dogs have, and want the world to recognize the breed’s many exceptional qualities. The only way this is going to happen is if incidents involving pit bulls become very rare. Once again, that (very unfairly) includes incidents where the pit bull is not at fault. As one regular user of the Go pit bull forum says, firmly: “Each time a pit bull is allowed to harm another pet all pit bull owners and their dogs suffer.” This isn’t just a matter of stigma, either: Breed Specific Legislation is still popping up around this country and the world, often causing great harm to pit bull’s quality of life.

We hope by this point you are persuaded that taking your pit bull to a dog park is a bad idea or – as another commentator on Go pit bull puts it – “like playing Russian roulette with two bullets rather than one.” We could also stress the health risks of dog parks, where other pets may not have their shots or have been properly wormed. But the real message we want to get across is the unpredictability of dog parks, and the possibly devastating consequences not just for your pit bull but for many others.

However, we don’t want to leave you on that bleak note, or worrying that your pit bull is doomed to a lonely, fettered life. The good thing is that even if they take a bit more effort, there are other ways to exercise and socialize your dog which don’t carry such high risks. Search out other conscientious dog owners like yourself and then consider joining in a doggy play group with dogs and owners you can trust, or simply arrange one on one play dates.

This kind of controlled environment is always safer than the lottery of a dog park, and if fights do break out – and you can never entirely eliminate this risk, no matter what kind of dog you own – then you are going to find it a lot easier to handle the situation without other strange dogs running around and ready to join in. Pit bulls often thrive best when they develop longer term, trusting relationships with other dogs, and that’s exactly what this kind of scenario encourages. This one really is a win win.

Why You Shouldn't Take Your Pit Bull To The Dog Park19 Pit Bull Owners Reveal Things They Wish Non-Pit Bull Owners Would…Should A First Time Dog Owner Get A Pit Bull?Human Foods That You Can And Cannot Feed To Your DogHow To Discipline a Pit Bull17 Tips For Raising A Well-Behaved Pit BullThe Truth About Pit Bull Aggression And AttacksHow To Discipline a Pit BullIs It Cruel To Dock Your Dog's Tail?