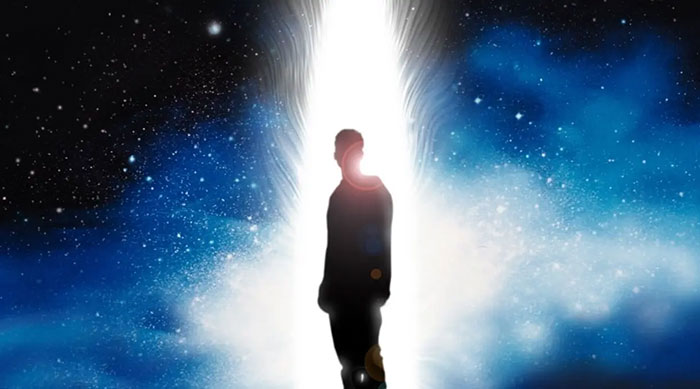 “The Man From Earth” is the best Sci-fi movie I’ve ever seen. If you’ve never heard of it, I don’t blame you. It’s a low-budget feature made with a cheap film camera that went straight to DVD in 2007 after a limited theatrical release. It takes place in one location and has no special effects. There’s also close to no action in the movie (save for one dramatic moment).

So, how can the best sci-fi movie of all time have no budget, no action, and no special effects? Through engaging and thought-provoking dialogue.

*Warning, please stop reading and go watch the movie if you want to avoid spoilers!

Okay, so what’s the plot? What do the characters talk about?

In the movie, professor John Oldman is packing up his things. He’s moving on from his position as a well-respected professor at a well-known university. Before he can sneak off to his new life, his colleagues show up and give him a farewell party. They can’t seem to get a straight answer out of John as to why he’s leaving.

The group moves to the living room for the party as John continues to pack. The colleagues cover a wide range of expertise. There’s a biologist, historian, art professor, and archeologist in the group. Soon the conversation gets going and John suggests that he’s working on a new book, asking about how a caveman could survive until the modern day.

What begins as good fun takes a bewildering turn as John lets it slip that he isn’t talking theoretically. He explains that he is the caveman in question and that’s why he must move on. He doesn’t age and must take his leave before people start to notice his prolonged youth.

John’s peers, to different degrees, are concerned about his mental well-being. They decide to play along and use their different expertise to try and catch John in a lie. When he has a plausible answer for everything, their worlds start to turn upside down.

Most of the movie takes place in a living room and the tension relies heavily on the dialogue. Still, you can cut the tension with a stone-age knife as the mystery unfolds. Things get really spooky when the group asks John if he’s ever met any figures from the Bible…

What else should we know about the film?

The screenwriter was Jerome Bixby. He introduced similar concepts about longevity in a Star Trek episode "Requiem for Methuselah" back in 1969. While Bixby first thought of the concept for the screenplay in the 1960s, he finished the script on his deathbed in 1998. That means the film wouldn’t be made and released until a decade after his passing, adding to the movie’s themes of death and longevity.

Where can I watch “The Man from Earth”

The Man from Earth is free to stream across multiple streaming platforms, including Amazon Prime (via freevee}. Several users have even uploaded the entire movie to Youtube. The studio doesn’t seem to mind as these uploads have remained untouched for years.

A look at the comment section reveals just how much fans love the film:

“No movie in the history of movies has stimulated my imagination more than this one. And for someone who has seen a lot of movies, has a lot of imagination and yet is very rarely stimulated, that says a lot for a piece of film consisting of a few people talking in a room.” – Says the top commenter.

“This isn’t a movie. It’s a FILM. This is one of my favorite films. Just dialogue. To immerse yourself in it. It’s beautiful” – another fan chimes in.

These aren’t selective comments. This is the general sentiment of most people who have seen the film.

Unless you’re John Oldman, you don’t have another thousand years to check out the movie. Trust me, it’s not a decision that you’ll soon regret. The Man from Earth is grounded sci-fi, but it’s still out of this world.

Every 'Scream' Movie Ranked from Worst to Best8 Exciting Sci-Fi and Fantasy Movies to Look Forward to in 2023The 2013 Scarlett Johansson Sci-Fi Flop That's Still Worth Checking…5 Glaring Lord of the Rings Movie Mistakes You Probably MissedThe True Story of Why James Cameron Tried To Disown His First MovieLeonardo DiCaprio’s Worst Movie Is So Terrible It Has a 0% Rotten…Rachael Leigh Cook Says It Was A Huge Mistake To Pass On This…Michael Caine’s Worst Movie Is So Terrible It Has a 0% Rotten Tomatoes…Kang Will Kill Thor? Insane New Theory About The Next Thor Movie