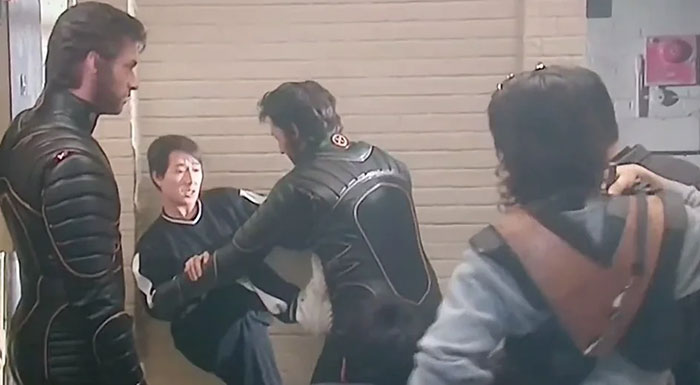 Ke Huy Quan is far from one of those child actors who retired from the industry after a few one-hit wonders. Instead, he had his career stunted in a much more literal way.

Quan’s popularity as an actor did fade during the 1990s, but he transitioned into a stunt coordinator after earning his film degree from USC School of Cinematic arts. This includes work as a stunt coordinator on the set of Bryan Singer’s X-men (2000). Twitter user Will McCrabb recently posted some rare footage of Quan on the set with the mutants.

23 years ago Ke Huy Quan was a fight coordinator on X-Men. pic.twitter.com/TgdIYuIHI0

In the 19-second clip, Quan works with a Wolverine stunt double as a young Hugh Jackman can be seen taking notes. Despite being the smallest in the room, Quan stands tall as he commands everyone’s attention with his detailed instructions. For a split second following the clip, we see the actors putting the advice to use.

The replies to the video are overwhelmingly positive, with most users showing their surprise and support for Ke Huy:

I’ve never seen this clip before. What a great gem.

At the time of this writing, the clip has been viewed over 3 million times. It’s representative of Quan’s recent resurgence across all social media platforms, which shows no signs of slowing down.

After working behind the scenes for three decades, “Data” has entered his prime.

While nostalgia is the trend, there’s a much more specific reason for Quan’s recent star power.

The actor returned to acting in 2022 when he starred in the multiversal film Everything Everywhere All at Once. He received critical acclaim for the role and it landed him a spot in season 2 of the Disney+ series Loki.

Fans have been quick to point out that this will technically be Quan’s second time working on a Marvel property after Disney’s recent acquisition of the X-men franchise.

Ironically, the actor/stuntman seems to be done with his “low key” roles for now as he re-enters the spotlight.

Ke Huy Quan’s career reminds us to stick to our passions and that it’s never too late to learn some new skills.

5 Video Game Movies That Don’t SuckThe True Story of Why James Cameron Tried To Disown His First MovieLeonardo DiCaprio’s Worst Movie Is So Terrible It Has a 0% Rotten…Rachael Leigh Cook Says It Was A Huge Mistake To Pass On This…The Best Sci-fi Movie You’ve Never SeenMichael Caine’s Worst Movie Is So Terrible It Has a 0% Rotten Tomatoes…Every 'Scream' Movie Ranked from Worst to BestKang Will Kill Thor? Insane New Theory About The Next Thor Movie5 Glaring Lord of the Rings Movie Mistakes You Probably Missed