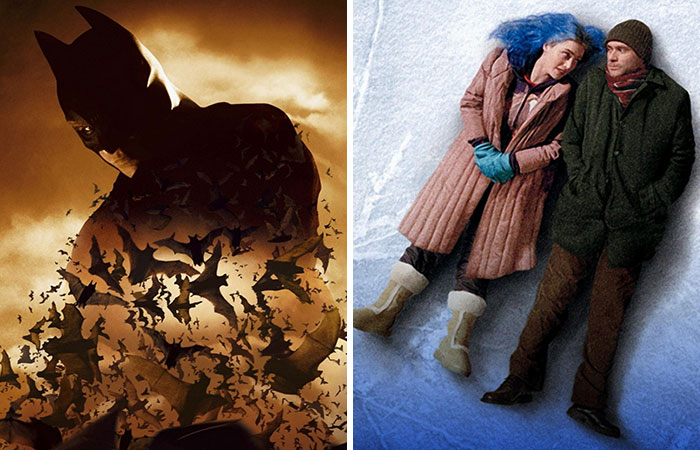 There are plenty of great trailers for terrible movies, but we’ve also seen the reverse happen as some of the greatest movies ever made have questionable marketing material.

Here’s my list of five great movies with terrible (or weird) trailers.

Let’s begin our list with the first installment of Christopher Nolan’s Batman Trilogy. Batman Begins set out to reimagine the Batman franchise after a long hiatus. Nolan rebooted the caped crusader as a serious and grounded character submerged in themes of tragedy and loss. The “darker” dark knight would usher in a new age of superhero films that explore the deepest complexities of the human soul. There was only one problem:

Seriously, the trailer comes complete with Nickelback music, out-of-context one-liners, and an extreme overemphasis on Katie Holmes. I’m a huge fan of Smallville, but I’m glad that the final product was nothing like this absurd but hilarious CW fanfiction.

Someday, somehow, I’m gonna make it alright. But not right now, because I have another terrible trailer coming your way.

Trailers are supposed to be a bridge to the film itself, and I’m not so sure about this one.

The Bridge to Terabithia is a fantastic film. But the trailer’s crime is that it’s terribly misleading. It presents the movie as a cute Chronicles of Narnia knockoff that you can drop your kids off to while you run errands. However, this could result in your children being changed forever and in desperate need of therapy.

In truth, Bridge to Terabithia is a tragic story about love, loss, and escapism. It hits on real-world problems and even has a shocking death. The trailer included every fantasy moment in the film to make it seem more lighthearted and fun.

Some viewers commented that they appreciated being misled as it added to the experience of watching the movie. Some modern trailers do reveal too much about the film, so there’s a plus side to deceptive trailers.

While the trailer definitely misrepresents and fails to live up to its source material, I’ll let this one slide because the movie is all about bending the truth.

The trailer depicts an admittedly cute scene between Olaf the snowman and Sven the reindeer. However, Elsa and the rest of the crew are nowhere to be seen. Instead, the franchise is presented as a buddy comedy that would likely get old after 30 minutes. One top youtube comment sums things up perfectly:

“I remember seeing this during the previews before Monsters University in 2013 and being like ‘that looks terrible’ and frozen ended up becoming one of my favorite Disney movies of all times.”

I can’t hate on the unimpressive trailer too much as Frozen went on to be one of the most successful Disney films ever made.

I guess I’ll have to let it go.

Eternal Sunshine of the Spotless Mind (2004)

Fans of Eternal Sunshine will enjoy going back to watch this gem. The trailer depicts the movie as an upbeat and zany romcom. Eternal Sunshine is actually a psychological drama that uses sci-fi elements to explore the nature of love. The film is often slow-paced and really lets the cast dig into their acting chops. The trailer probably misrepresented the film’s content on purpose to attract Jim Carrey fans who were used to his more comedic roles.

Those who bought a ticket looking for an easy watch were soon in over their heads, but you’d be hard-pressed to find someone complaining. The movie is ranked number #90 on IMDb’s list of the top 250 movies of all time.

This trailer for Sam Raimi’s beloved Spider-Man movie is both terrible and unlucky. It was filmed for promotional purposes. The result is something that feels rushed and unrelated to the final product.

The trailer also had incredibly bad timing as it was filmed in early 2021 and heavily featured the world trade center’s Twin Towers. At the end of the short, the bank robbers are eventually caught and suspended between the two towers. Depictions of the towers were seen as insensitive given the events of 9/11 and the trailer was eventually scrapped in its entirety.

There are conflicting rumors about the proposal to use the “trailer” as the movie’s cold open. This move would have resulted in the poor man’s version of the opening to Christopher Nolan’s The Dark Knight, which also featured a bank heist. Fortunately, this never happened, and Spider-man was a web-slinging, money-making hit. Raimi’s superhero flick was the first film in history to bank over $100 million in a single weekend.

That wraps up our list of terrible trailers to good movies. Don’t worry, there are more film and TV breakdowns “coming soon.”

5 Actors That Went All Out In Terrible MoviesLeonardo DiCaprio’s Worst Movie Is So Terrible It Has a 0% Rotten…Michael Caine’s Worst Movie Is So Terrible It Has a 0% Rotten Tomatoes…She Played 'Persephone' in The Matrix Movies. See Monica Bellucci Now…8 Exciting Sci-Fi and Fantasy Movies to Look Forward to in 20235 Video Game Movies That Don’t Suck11 Disturbing Lines From Horror Movies That Shook Viewers To The CoreThe 8 Most Anticipated Horror Movies of 2023Kevin Costner Passed On One Of The Greatest Movies Of All Time To Be…