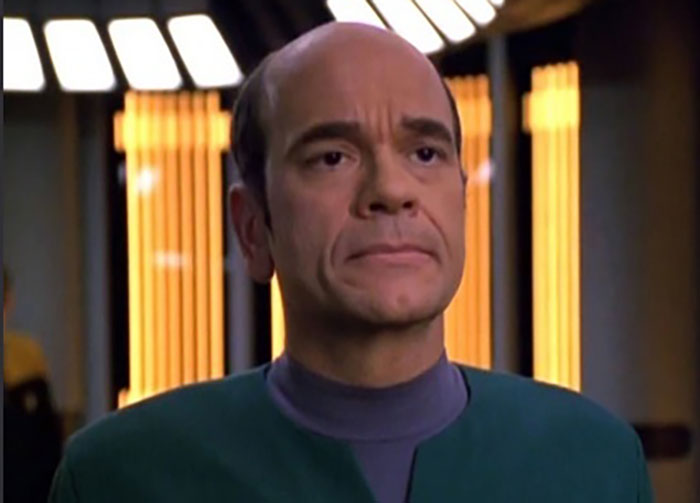 You know when you are watching TV and you see that guy, you know, that guy, that you swear you see in every show in at least one episode? Well, that’s probably Robert Picardo.

While he has landed pretty awesome roles on shows like The Wonder Years, China Beach, and Star Trek: Voyager, Picardo’s career has spanned an astounding five decades (six if you include his start on Broadway) giving us performances in some of our favorite movies and shows.

While you may not have known his name, you, your parents, and your grandparents have seen his face grace a screen.

Born on October 27th, 1953, in Philadelphia, Pennsylvania to Italian parents, Robert Picardo almost wasn’t an actor at all. Originally attending Yale as a pre-med student, he decided to switch it up and instead left with a Bachelor’s Degree in drama. If all of that wasn’t impressive enough, Robert also has quite the lovely singing voice.

While not becoming the doctor his parents thought he would be, you can’t say Picardo isn’t successful at what he does. And it all started with theatre performances in the play Sexual Perversity in Chicago and The Primary English Class with the flawless Diane Keaton.

Shortly after those works, Broadway came a-calling and Picardo made his debut in 1977 in Gemini and followed it up with 1978s Tribute. Robert was part of the New York theater scene alongside his Voyager cast mate Ethan Phillips.

Once Robert made that first on-screen appearance in a few episodes of Kojak in 1977, he hasn’t stopped showing up all over our screens since. While we couldn’t possibly list all of his roles, with over 75 TV spots and 50 movies (and counting) to his name, we do want to mention some highlights. 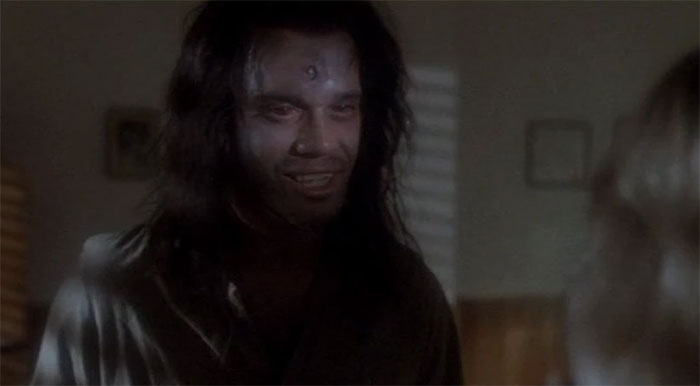 Picardo’s first feature film debut was in the 1981 horror flick The Howling. He played the key role of the stalker-but-also-serial-killer-but-also-werewolf Eddie Quist. The movie was praised for its makeup special effects and helped kick off the 1980s werewolf movie resurgence. 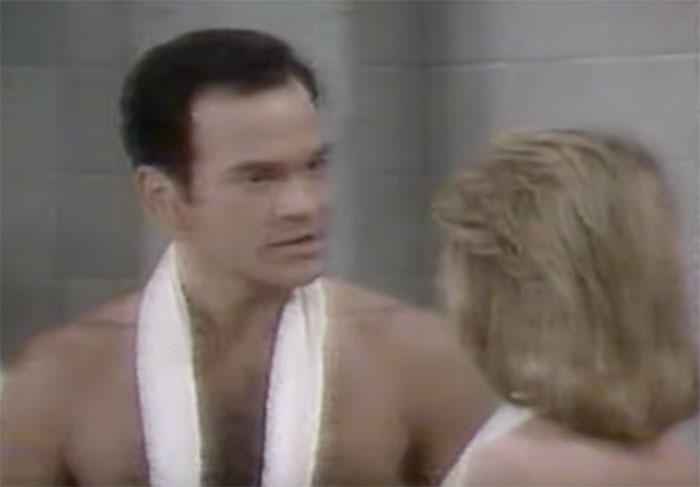 Off-Broadway play Steambath was turned into a sitcom for Showtime in 1984, showing us what the afterlife would be like if it were similar to a steam bath, but with the dead still worrying about their pre-death problems. And Picardo was on board to play Rodney Tandy, a father who was looking to start fresh after his divorce, but doesn’t really get a chance to because he, well, dies. 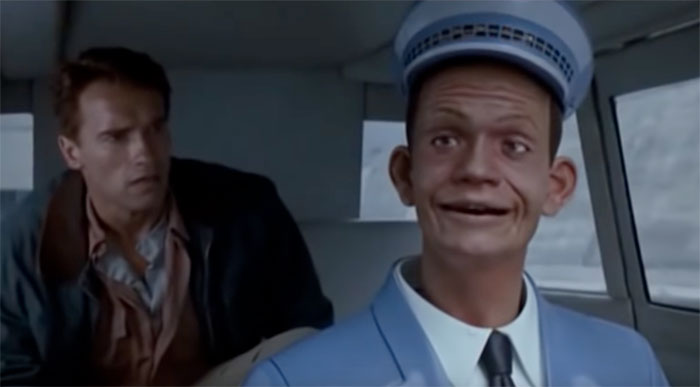 Before the bending of reality in movies like Inception, there was possibly one of the best sci-fi movies of the early 90s that made you wonder what was real and what was fantasy – Total Recall. If you’ve seen it as many times as we have, you’ll know Picardo was the best part of it, as the automated taxi, Johnny Cab. 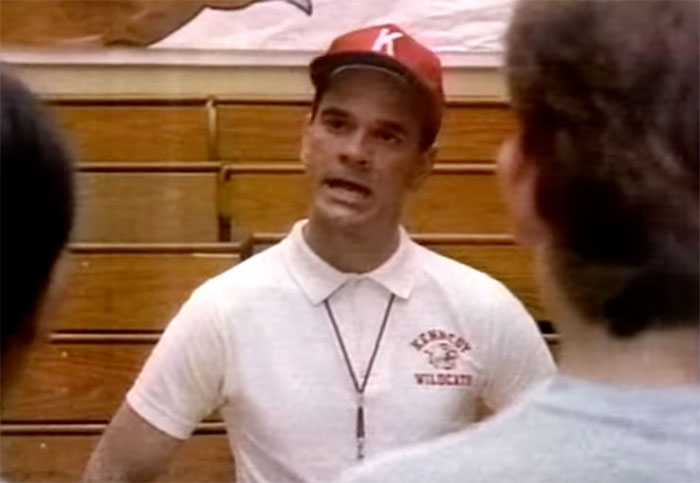 Lend us your ears and we’ll tell you about the role that nabbed Robert Picardo an Emmy nomination as Coach Cutlip on The Wonder Years. Picardo spent 1988 to 19981 playing Coach, appearing in a total of 15 episodes. 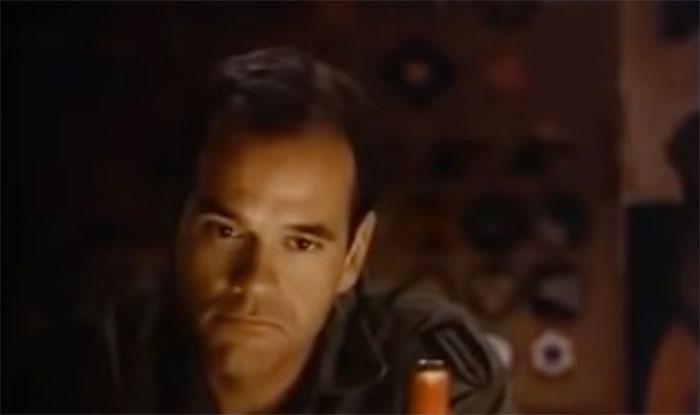 At the same time Picardo was Coach on The Wonder Years, he was also in a more serious role as Dr. Dick Richard on the show China Beach. Over 54 episodes on the drama about the Vietnam War, he was the head surgeon Captain Richard. 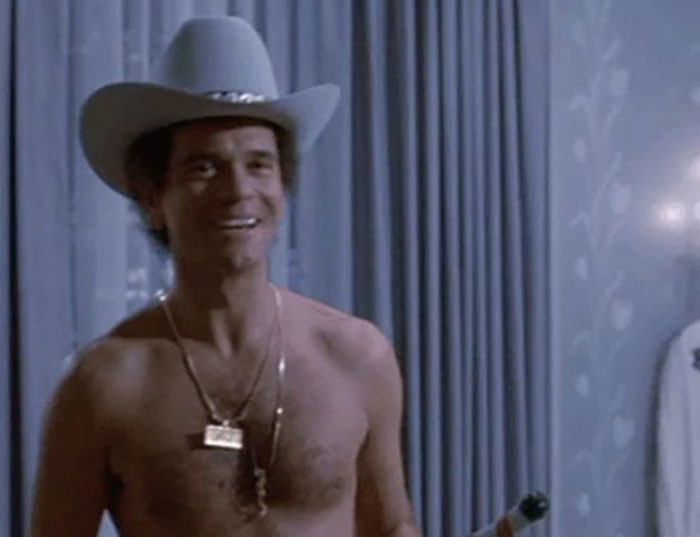 If you haven’t heard of the movie Innerspace, let alone seen it, it needs to go on your list if you love sci-fi, comedy, and the hilarious antics of Martin Short. Released in 1987, Innerspace was packed with the hottest stars of the time, like then-couple Dennis Quaid and Meg Ryan. Robert Picardo played The Cowboy, the main henchman baddie who wouldn’t give up his evil ways. 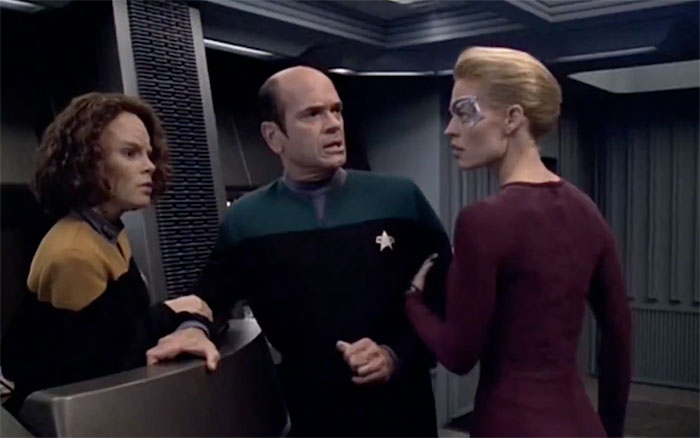 For 166 out of the 172 episodes  Star Trek: Voyager aired, Robert Picardo played Dr. Lewis Zimmerman. Though The Doctor was a hologram, Picardo brought enough humanity to the character over all seven seasons that the role earned him a Saturn Award nomination.

What did fans think of him on the show?

Fans absolutely appreciated (and rightly so) Picardo’s performance on Star Trek Voyager. Fans loved the way he brought life and energy to a role that was a hologram spitting out doctor advice.

Robert mentions that his favorite episodes of Voyager were the comedic ones. One episode that stands out in his mind is “Tinker, Tenor, Doctor, Spy.” It’s an episode where The Doctor gets lost in his daydreams and the women of the crew (Seven of Nine, B’Elanna and Captain Janeway), throw themselves at him.

Robert says his least favorite episode was “Warhead,” an episode were a bomb was downloaded into the Doctor. He says he had to yell the entire episode and he felt it was something that was very watchable for the viewer. 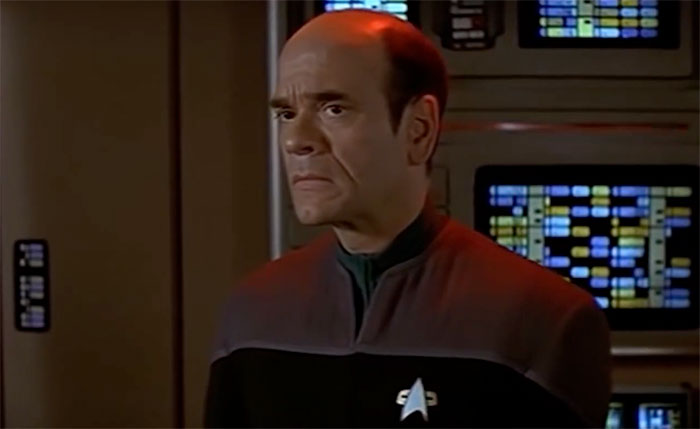 In the 1996 movie Star Trek: First Contact Robert Picardo made a surprise cameo as his Star Trek: Voyager character The Doctor.

Picardo did the homework and brought the receipts to make sure his Doctor would be included in this particular Star Trek movie. The fact that we see his cameo adding a brief comedic scene to the movie was solely due to his due diligence.

What did Robert Picardo do after Star Trek: Voyager?

What has Picardo been doing since Voyager? What hasn’t he been doing? Picardo has been on the screen, big and small, basically every single year since his doctor days on Voyager. His acting career isn’t slowing down anytime soon.

Now Picardo is still making movies and appearing on some of your favorite TV shows. He’s also been lending his voice to the video game world every other year or so since 2008.

Having been in Star Trek and Stargate, all he needs is a spot in the Star Wars universe to complete the holy trifecta. 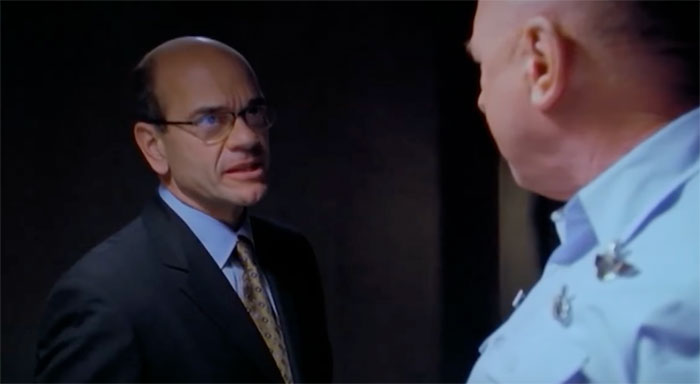 In the Stargate world Robert played Richard Woolsey, with his character appearing in Stargate SG-1, Stargate Atlantis, and one episode of Stargate Universe.

On Stargate SG-1 Picardo was Richard Woolsey for only seven episodes. But Robert gave such a performance that he was brought back for Stargate Atlantis for a longer run and more screen time. 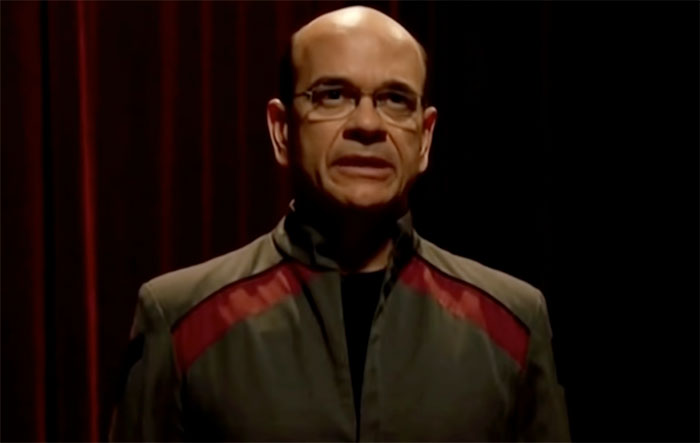 By the time Picardo joined the crew on expedition Atlantis, his Woolsey character was more defined. Robert played Richard Woolsey for 20 episodes on the show, gaining more and more popularity throughout seasons three and four and by season five, he was not only a main character, but took over command of the expedition. 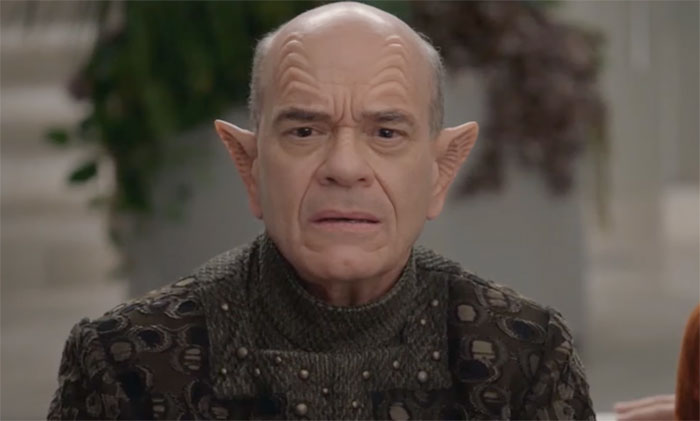 Going back to his sci-fi roots, but in a funny way, Picardo joined the cast of Seth MacFarlane’s comedic homage to Star Trek, The Orville, for a few episodes as Ildis Kitan. The Orville’s guest star list is amazing, so it’s no wonder they wanted Picardo to pop in and say hi. 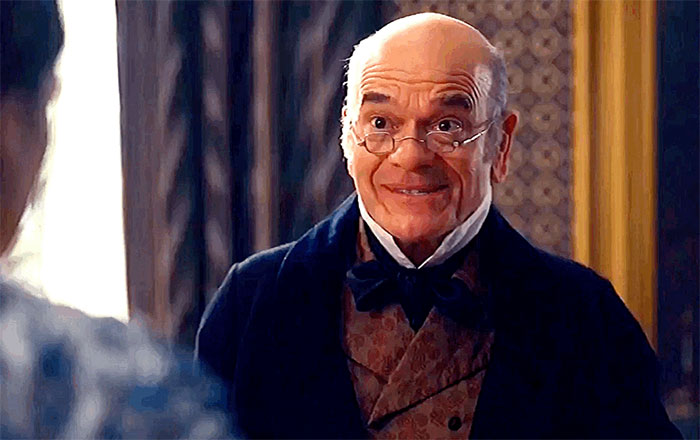 Appearing in period pieces isn’t really what Picardo is known for, but that didn’t stop him from joining the cast of the Emily Dickinson dramedy show Dickinson. He played villager Ithamar Conkey for 10 episodes on the critically acclaimed show.

Is Robert Picardo in Picard?

Trekkies went crazy over the return of Sir Patrick Stewart in his famous role in Picard. Throughout the first season, there were glorious Easter eggs of old favorites making their guest spots.

Unfortunately, as of right now, Robert Picardo’s Doctor has no plans to return. But if there’s one thing the internet and Trekkies are capable of, it’s having their voices heard, so maybe resistance will be futile in the future.

What is Robert Picardo doing now?

Besides acting, Robert stays active with Star Trek conventions and cruises, creating content for his YouTube channel and serving on the board of directors for the Planetary Society. 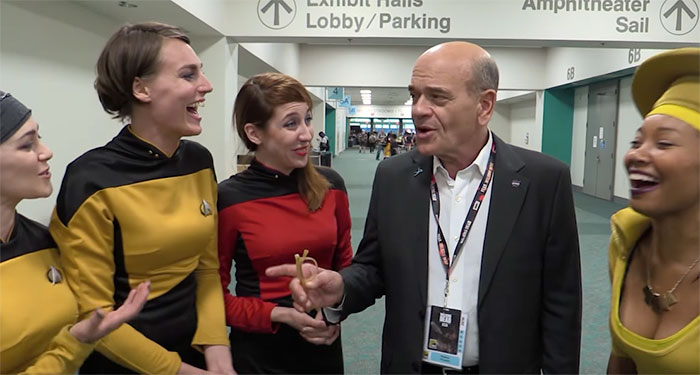 If you want to meet the real-life legend that is Robert Picardo, you can catch him at a convention. On the circuit since 1995, he’s been pretty active since 2007, ramping up his appearances in 2012. In 2022 Picardo had already made five convention appearances, with at least one more on the books.

If you need to have even more Star Trek in your life, you can catch Star Trek: The Cruise VI in the US and Canada. It’s a convention on a cruise ship, with some of your favorites, like Robert Picardo’s Doctor, taking the journey with you. We checked out the pricing, and it’s really not a bad deal for what you get. Beam us there! The current cruise is booked up, but you should keep your eye on future voyages. 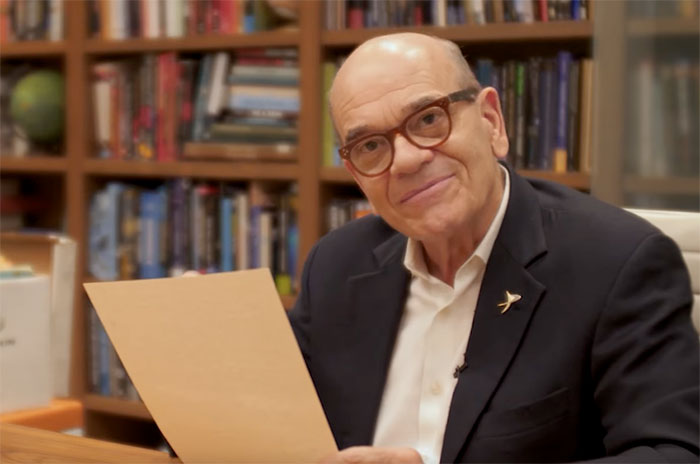 During his tenure on Star Trek: Voager , Robert was asked to join the advisory council of the Planetary Society, a group co-founded by physicist Carl Sagan and dedicated to the advocacy of space science and exploration.

As part of the Planetary Society, Robert pens a monthly newsletter, The Planetary Post, which documents the latest happenings in the world of space and science.

After then end of Voyager, Robert and Tim Russ have gone on to become passionate learners of astronomy and space.

Robert has since joined the board of directors of The Planetary Society. 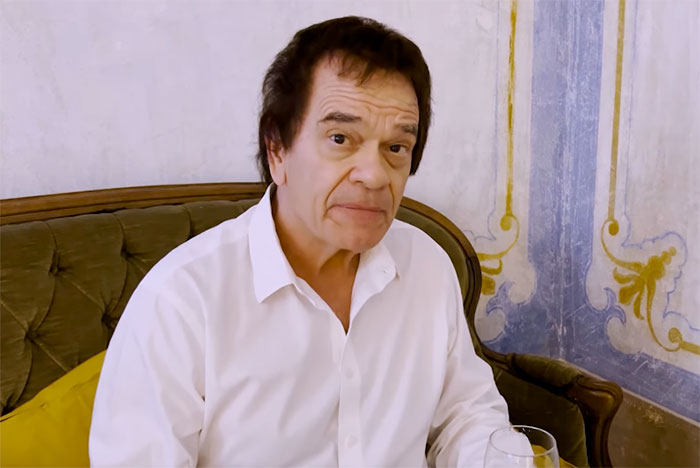 If you want some wholesome internet gold, check out Robert Picardo’s YouTube page. Find his alter ego Alphonso, some technobabble tidbits, and other fun videos that just genuinely make you smile and laugh. His videos are all short (mostly two minutes and under) and he posts about once a week, so you don’t get bombarded with content. It’s one of the good pages out there.

If you watched SNL in the 90s, you might remember a fan favorite character Tim Meadows gave us called The Ladies Man. Robert Picardo gave us his version starting in 2011 called Ask Alphonso via his personal YouTube account.

With an accent and some hair, Robert as Alphonso doles out relationship advice to those unlucky in love. But, it’s inappropriate advice that you hope no one follows. 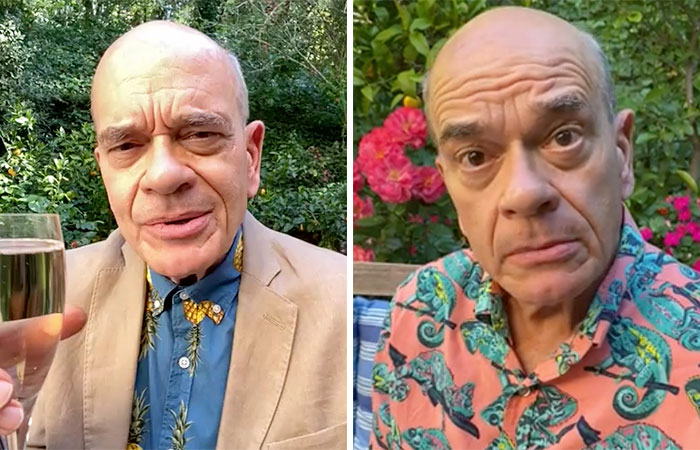 The whole Cameo business for celebrities sort of blew up during the pandemic when they weren’t working but still needed to pay off those huge houses.

One celebrity who seems to be doing it for no other reason than he’s a great guy who wants you to have some joy in life is Robert Picardo. It’s no wonder he has a 5-star rating with over 1,200 reviews.

As if being one of the most beloved actors isn’t enough, Robert Picardo also wrote a book through the eyes of his Voyager character, Doctor. The Hologram’s Handbook is useful for other holograms trying to fit into the world as well as Star Trek fans in general.

Picardo was married to fellow actor turned day trader Linda Pawlik from 1984 until he filed for divorce in 2012. Having a smooth sailing acting career didn’t translate to his love life as he and Pawlik went through some complicated and unfortunate events from 2012 to 2014 that broke their decades-long relationship. She is being sued for allegedly being an accessory to murder, however a judge dismissed the lawsuit in 2019. 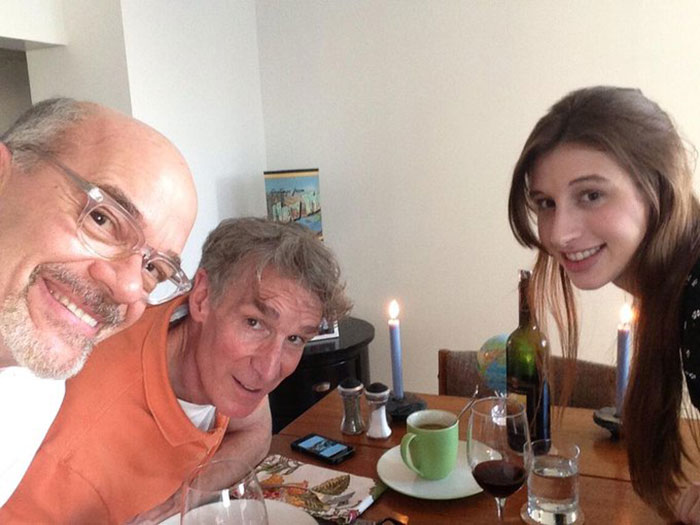 Robert’s daughter Gina Picardo is a video editor living in New York. She most recently worked on projects for Atomic Kid Studios, LLC. 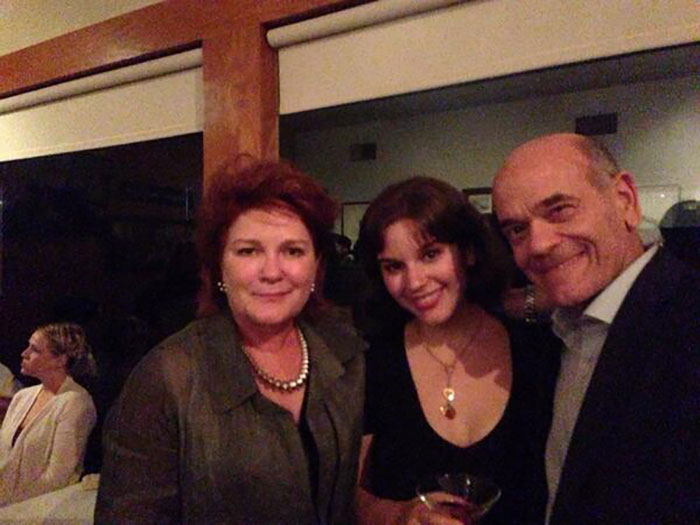 Robert’s other daughter Nicollette Picardo is also in the business as an Art Department Coordinator for shows like Chuck, The Mentalist, and  Secrets and Lies, as well as being a compositor and matte painter on other various projects.