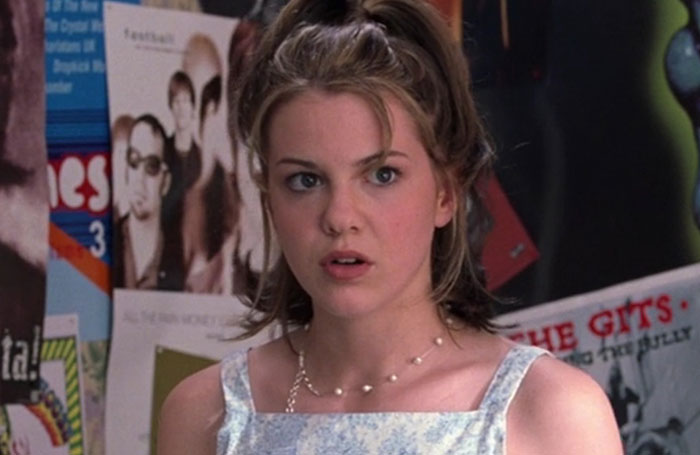 Though her real name is definitely unique, sometimes you can’t place an actress until you know the role they are best known as. For Larisa Oleynik, that role was as Bianca Stratford in the movie 10 Things I Hate About You.

She nailed the performance as the complete opposite of her older sister Kat in the film, and will always be everyone’s favorite sophomore.

Has Larisa stayed as popular in the years since her most famous breakout role? Is she still acting as the bubbly fashionable girl? Can she still speak French? We don’t know that last one, but let’s see if Larisa is still out there punching the bad guys.

Born in Santa Clara, California, to parents Roman Oleynik, an anesthesiologist, and Lorraine (Allen) Oleynik, a nurse, on June 7th, 1981, Larisa Romanovna Oleynik made her debut.

Larisa’s family moved to the San Francisco Bay Area and she was brought up as Russian Orthodox, as her father was Russian and Ukrainian

In 1999, Oleynik attended Pinewood School in Los Altos and then went on to graduate from Sarah Lawrence College in Bronxville, New York in 2004.

Larisa’s first gig was at only eight years old in a production of Les Miserable in San Francisco in 1989. Larisa performed double duty as Young Cosette and Young Eponine in the musical, which also starred Rider Strong.

Her first on-screen role was in 1993 when she popped up in one episode of Dr. Quinn, Medicine Woman. While it was only her voice, her first movie role was as Pre-teen Odette in the animated film The Swan Princess in 1994. 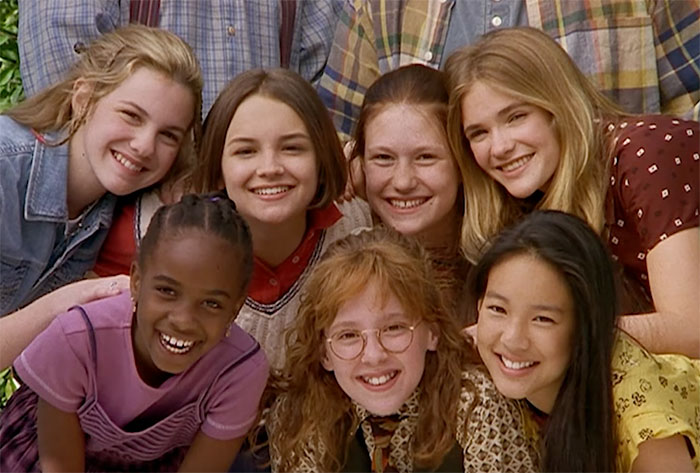 Her next few roles in the 90s were where Larisa started to gain real notice as an actress, starting as Dawn Schafer in the 1995 version of The Babysitter’s Club alongside another 90s breakthrough actress Rachel Leigh Cook. 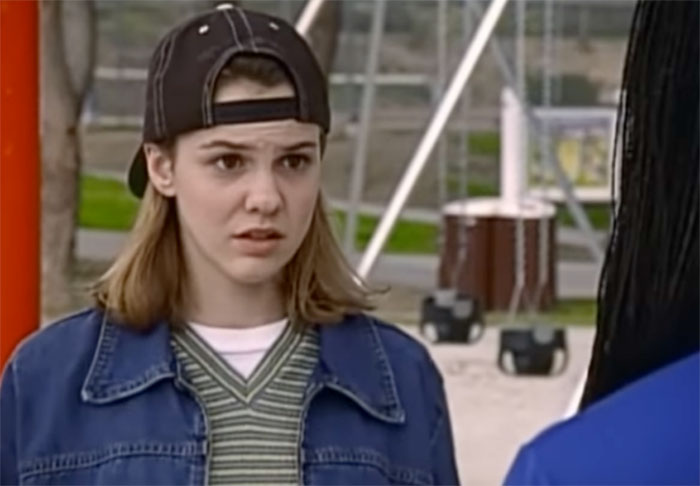 In 1993 Larisa was cast to be the star in the TV series The Secret World of Alex Mack. The show centered around Larisa’s character Alex, who finds she has powers after a truck carrying a load from the local chemical plant spills some experimental goo on her. Very Teenage Mutant Ninja Turtles of it all.

But for 78 episodes across four seasons in the SNICK line-up, Larisa played the lead that also saw guest appearances from other up-and-coming actors Meredith Bishop, Jessica Alba and James Marsden.

10 Things I Hate About You 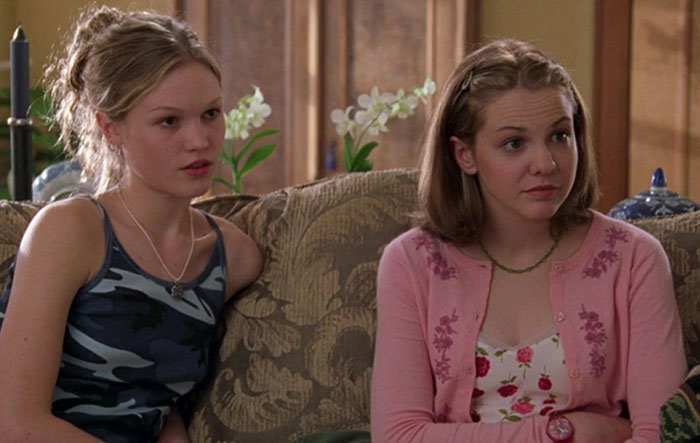 But the one role that we all love her for is as Bianca Stratford in 1999s 10 Things I Hate About You.

A modern take on Shakespeare’s The Taming of the Shrew, the movie deserves a rewatch a few times a year and is a staple in the teen movie genre with a cult following it definitely earned.

Oleynik then followed co-star Joseph Gordon-Levitt over to his series Third Rock From the Sun when she joined the cast in a reoccurring role for 21 episodes in seasons four through six, playing Levitt’s girlfriend.

Since then, Larisa has appeared here and there on TV shows Malcolm in the Middle, Without a Trace, and Psych.

From 2010 until 2015 she grabbed a five-episode role on Mad Men as Cynthia Cosgrove. Other big roles for Larisa include a 28-episode voice role for the animated series Winx Club: Enchantix in 2011-2012 and again in 2013-2014 for Winx: Beyond Believix, in seven episodes on Hawaii Five-O, and in Pretty Little Liars as Maggie Cutler,

Larisa made a return to Broadway in 2014 – the first time since her debut in 1989 – with Be a Good Little Widow, with her last time on stage in 2019s Miss Lilly Gets Boned, where she had the lead of Miss Lilly.

What is Larisa Oleynik doing now?

Larisa is still acting these days, with her last film being the 2021 rom-com We Broke Up with Aya Cash. On the TV side, she played Shawn for six episodes in the show Trinkets until 2020.

That same year she was in the comedy series The Healing Powers of Dude as Karen Ferris for all eight episodes that aired on Netflix. 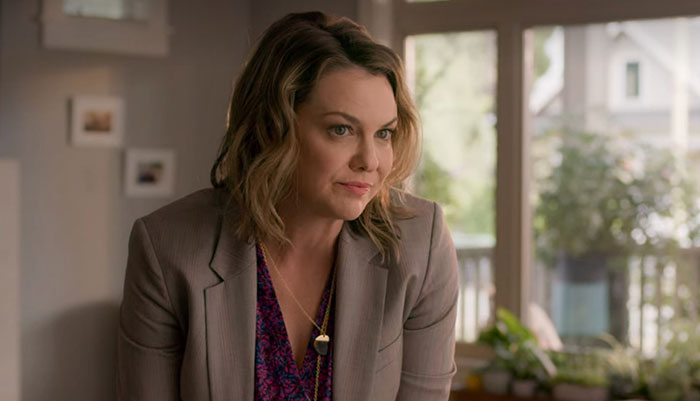 Larisa currently has one upcoming project, a short film titled Pigeon, where she portrays main character Liz in the dark comedy that follows a woman navigating life post-breakup during the holiday season.

Larisa stated in an interview in 2020 that she is still in a group chat with her original Babysitters crew. She went on to say that the women still support each other and will be life-long friends. 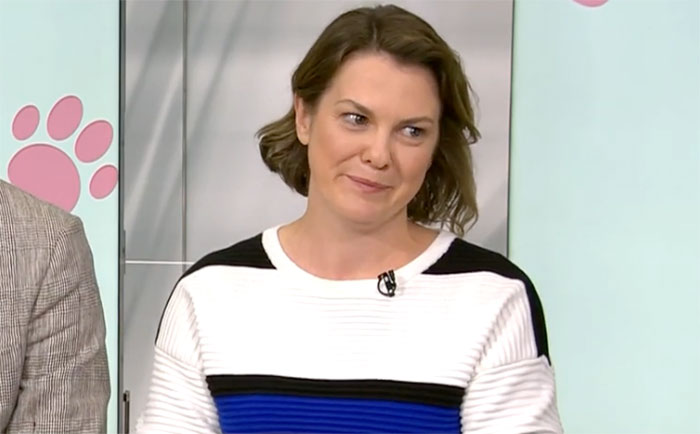 As for her thoughts on the old 10 Things I Hate About You movie? She’s like us and still loves it.

Though it didn’t do well when it opened, the fact that it still is a great watch doesn’t surprise Larisa, as she’s worked with the writers since and credits the script for the success over the years.

She also believes that the absolute fun the cast had, and the chemistry they shared, definitely translated through to the audience as to why it’s such a hit today.

Larisa had a scare when a fan started stalking her and became so obsessed he changed his last name to Oleynik in 2010. It took until 2013 to get a proper restraining order on the person, which ran out in January of 2016. There hasn’t been a report of a renewed order, so hopefully, Larisa is safe from that.

With all of the years they spent working together, it’s no surprise that Larisa and leading man Joseph Gordon-Levitt were once a couple.

They started dating in 1998 when they met on 10 Things and continued until the end of her guest run on his show Third Rock in 2002. As far as these days, it seems Larisa is happy being single.

While we wait for a 10 Things I Hate About You 25th reunion, we’ll wait for Larisa’s next movie to come out and see what else she brings her personality to.