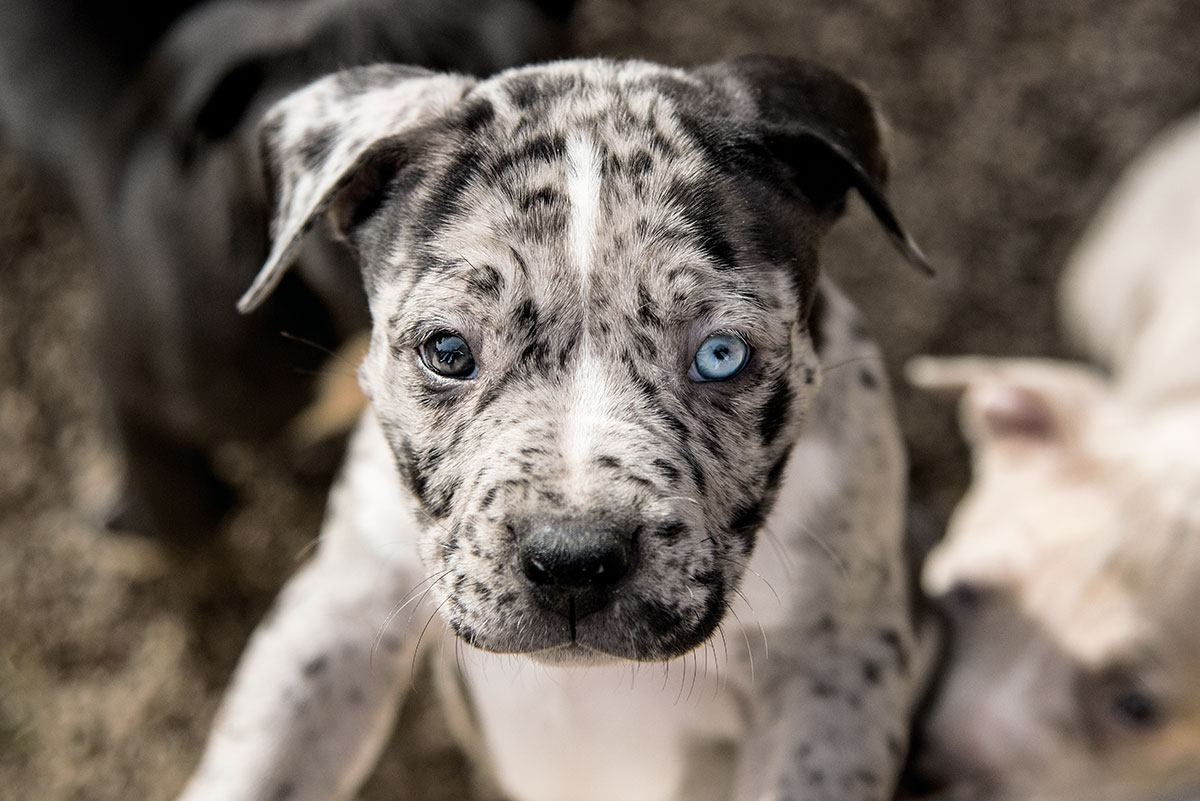 A merle coat is one of the most gorgeous in the dog world, an enticing swirl of colors which grants each dog a unique and distinguishing pattern, which often involve dark splotches of a color overlaying a lighter shade of the same hue.

While merle coloring is not restricted to pitbulls, the allure of this coat is attractive to the lovers of this breed and many current and would-be pitbull owners covet these astonishingly beautiful animals and many are willing to pay great expense to have a merle pitbull of their own.

As such, there are a wide-spectrum of questions about merle pitbull acquisition and even concerns raised about what causes these unusual color schemes.

Fortunately, you can find the answer to those questions right here.

1. What is a Merle Pitbull?

“Merle” refers to the color pattern on a dog’s coat. It describes a coat that is one color throughout with splotches of another color. It’s considered very attractive in a dog. Merle is a genetic marker that results in differences in pigmentation so it can be achieved through breeding. Merle is not the same as brindle.

A merle pitbull, therefore, is a pitbull bred to have this unique color pattern present.

2. What Causes Pit bulls to Have Merle Coats?

Without going too deeply into complicated genetics, the merle coat (also called dapple) is actually the result of a genetic mutation which any dog could potentially exhibit, but in most breeds it has been completely bred out due to the prominence of auditory and visual impairments that result as a side effect of the allele in question.

Merle occurs commonly in a lot of breeds, but the pitbull is not one of those. Instead, breeders have encouraged the gene’s growth due to the attractiveness and unusual nature of the coat, which is highly prized by pet lovers.

Which means that there are opportunities for magnified profits for breeders as people are willing to shell out great sums of money to have one of these beautiful animals.

Where merle is random and results in splotches or spots, brindle is generally more uniform. This occurs when a brown dog has small stripes of black or brown. It can look tiger-like. Some brindles have uniform patterning throughout the dog whereas others have patches that are brindle.

4. Many other dogs have merle coloring

Plenty of breeds see evidence of merle coloring, not just pits. Common breeds that have the merle gene include:

Of these, it’s most common in the Australian Shepherd and Catahoula Leopard Dog.

5. How is Merle Coloring Achieved in a Pitbull Litter

In order for a pitbull to have merle coloring it must have a specific genetic marker: the merle gene. Some people have mixed pitbulls with Catahoula Leopard Dogs to gain the coloring. Generally speaking, a pitbull is not purebred if it has this coloring. First, since it does not occur naturally in the breed, the gene must be introduced somewhere down the breeding line. Second, a pit with merle coloring can no longer be registered or recognized in an effort to discourage breeding for the color.

6. Merle Pitbulls are Not Recognized

The American Dog Breeders Association and many other reputable organizations have stopped recognizing merle pitbulls. The reason is simple: the merle gene isn’t simply about coloring. It also brings with it significant risk for reduced vision and hearing in dogs.

By purposely breeding dogs for the gene great risks are taken with the puppies health.

In most cases, they are just as healthy as any other member of their breed. However, they do face an increased risk of health issues, but this often occurs as low as 3% of the time in pitbulls which possess the mutation.

That in itself is not a terrible risk, and not generally much cause for concern. If your merle pitbull is healthy, he should continue to be fine.

However, it is important to know how he was bred because there are circumstances which we will discuss soon which can lead to significantly higher risk for these health issues.

8. What Kind of Health Problems Do Merle Pitbulls Have?

When facing afflictions from the merle mutation, these dogs usually face auditory and visual problems.

While the main auditory issue is deafness, in the visual department, merle breeds can experience the inability for pupils to dilate, night blindness as well as complete blindness, off-centered eyeballs, iris fissures, missing eye tissue, extra eyelids, or even being born with no eyes at all.

In addition to these health-related problems, they may face immune system deficiencies (source).

9. What Is a Double Merle Pit Bull?

Double merles are pitbulls which result from the breeding of one merle pitbull with another merle pitbull. The idea behind the mating is that based on genetics and the extreme popularity of dapple pitbulls, mating two such animals increases the chance of producing merle puppies.

This is true. Breeding between the two will result in all merle offspring; however 25% of those will acquire an extra helping of the merle gene, which is what is called “double merle”.

That quarter of the litter faces disaster as they suffer a 50% higher chance of suffering the birth defects attributed to the merle gene, the halved life span, and while they may have some spotting, their coat will usually be white and not the coveted swirl that makes the merle species so highly sought.

These issues are so horrible and prevalent that double merles have been given the moniker, “lethal whites”. This practice also raises significant controversy because these animals are being exposed to increased risks for the sake of monetary gain.

10. What Is a Merle Pitbull’s Lifespan?

Average pitbull life expectancy is an average of about 12 years. You can reasonably expect a merle pitbull to also experience a similar range of years, unless it is a double merle, which means that its lifespan will likely be cut in half.

11. Why do Merle-colored Pitbulls Exist Despite the Risks?

Breeders who are looking for high sales know that merle-colored puppies fetch a high price. So much so that the 25% risk of a double-merle puppy being disabled isn’t going to affect their revenue stream much. For them, it’s worth the risk.

Pitbull litters generally run 5-10 puppies. That means breeders can assume one or two puppies will be unsellable out of each litter. Considering the price that comes with a merle, it’s worth it to them.

Yes, which is why they can be so expensive. They are perhaps more common than they used to be because breeders enjoy the exceptional profits that merle pitbull pups can bring.

13. How Much Do Merle Pitbulls Cost?

If you want the allure of the dapple coat, you are unfortunately going to have to shell out a lot of money for it.

Typically prices of merle pitbulls can be triple the price of a non-merle, but top of the line options can surpass $10,000 dollars and even reach three times that price!

No. And, we recommend taking it a step further: you should not refer to these dogs as “merle pitbull.” This naming convention makes it sound like it’s a special, good quality in a dog when, in fact, it is not. Use “merle-colored” in your nomenclature and avoid those selling these dogs. Merle-colored pitbulls are not special or rare. They are bred at a high risk and likely have littermates who were discarded because they were born without vision or hearing. Any breeder doing this is not someone who loves dogs.

That said, if you see a merle-colored pit at your local shelter, by all means bring him home! Generally speaking, dogs bred for color have genetic health conditions. This is why your local shelter dog is one of the best options out there.

15. What Bloodline Is a Merle Pitbull?

The merle is a color adaptation based on a mutation, so the bloodline of the merle is based on which type of pitbull it is and has nothing at all to do with whether it is dapple or not.

In fact, merle pitbulls are not recognized at all by the American Dog Breeders Association and similar organizations.

16. How Big Will a Merle Pitbull Get When Fully Grown?

Remember that this is not a special breed of pitbulls, but simply a pitbull that has a genetic mutation which affects the color of its coat and possibly its health.

They often average between 30-60 pounds which is typical of all types of pitbulls, which is considered a medium-sized canine.

Once more, merle simply relates to the coloring and gene mutation and is not indicative of the breed itself.

Pit bulls get a bad reputation for aggressiveness and attacks on humans, but it’s important to realize that it is because many of them have been trained to be that way. In other words, they are a victim of their circumstances and how they were raised, similar to what can happen to a human.

Generally, the breeds are considered to be very family friendly with a great love of humans and even have a calmer temperament than most other dog species.

They are a healthy and athletic breed that aims to please and loves a good snuggle. They can be very affectionate and kid friendly, which can make them great pets (source)!

All pitbulls are fairly consistent shedders, but since they only have a single coat that will be a consistent amount of shed year round.

Any pitbull that is more aggressive than others is usually the result of conditioning. These animals are no different from any other pitbulls except they have the potential to face greater health problems.

They are just as smart as any other pitbulls and, just the same, can become even smarter if they are given the opportunity to learn.

21. What Is the Rarest Pit Bull Color?

While the merle pitbull is considered rare because of its mutation, what is generally considered the rarest color for pitbulls is actually blue or the “blue fawn” variant, which has a silvery appearance.

The reason for the rarity is that it involves the perfect combination of two recessive color variants to exist.