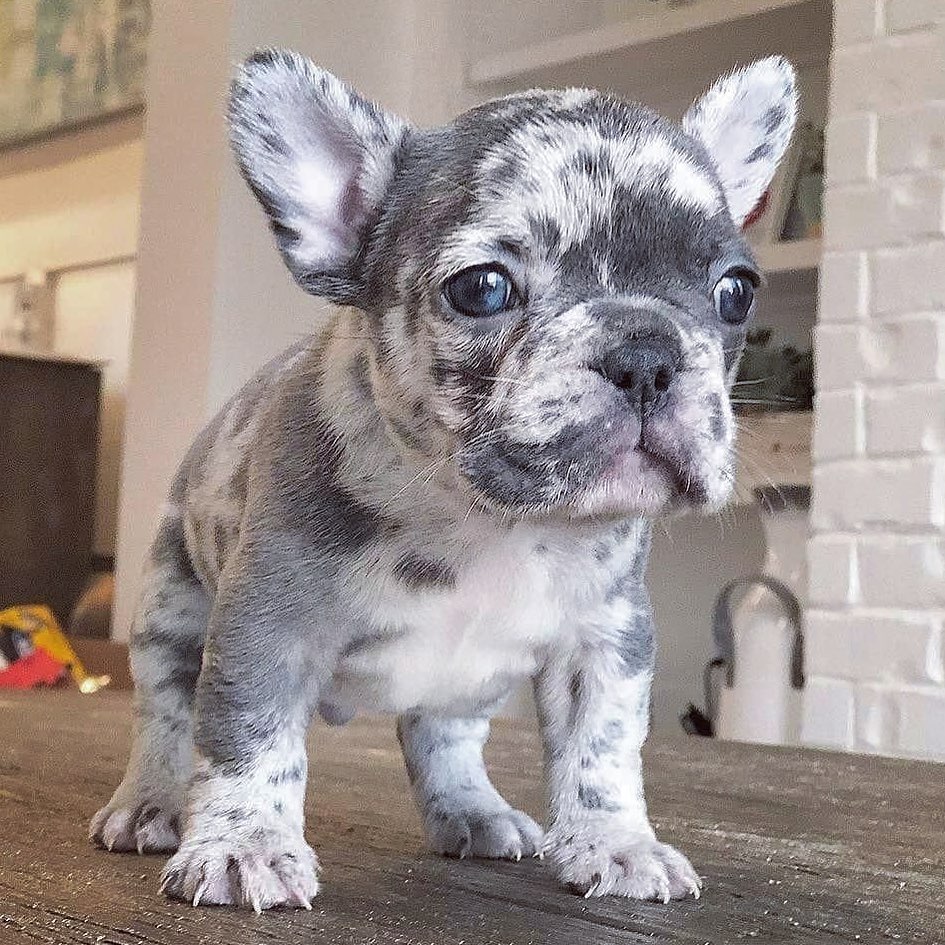 French bulldogs are known for their easygoing and playful temperament making them a popular pet for many. In addition to this, some feature the merle gene which gives them a stunning fur coat and striking blue eyes. Below you’ll discover more about merle French bulldogs and why they’re so sought after.

1. Merle is a type of genetic condition that creates a unique type of pattern on a dog’s coat

This gene results in various pattern styles that occur either in solid or piebald forms. While it mainly affects a dog’s coat, it can also result in heterochromia iridum, a condition that causes the eyes to be different colors.

3. The merle coat is produced when a dog has a single copy of the M allele.

Merle dogs have the genotype Mm, which means they have one allele for merle (M) and one allele for non-merle (m). If you breed a non-merle dog (mm) to a merle dog (Mm), you will on average get a litter of puppies that are half merle and half non-merle.

If you breed two merle dogs together, you will on average get a litter of puppies that are half merle, one quarter non-merle and one quarter double merle.

In addition to this, some merle French bulldogs might have blue eyes because of low melanin levels. If their body doesn’t have a high amount of this amino acid, the dog has a better chance of developing blue eyes. 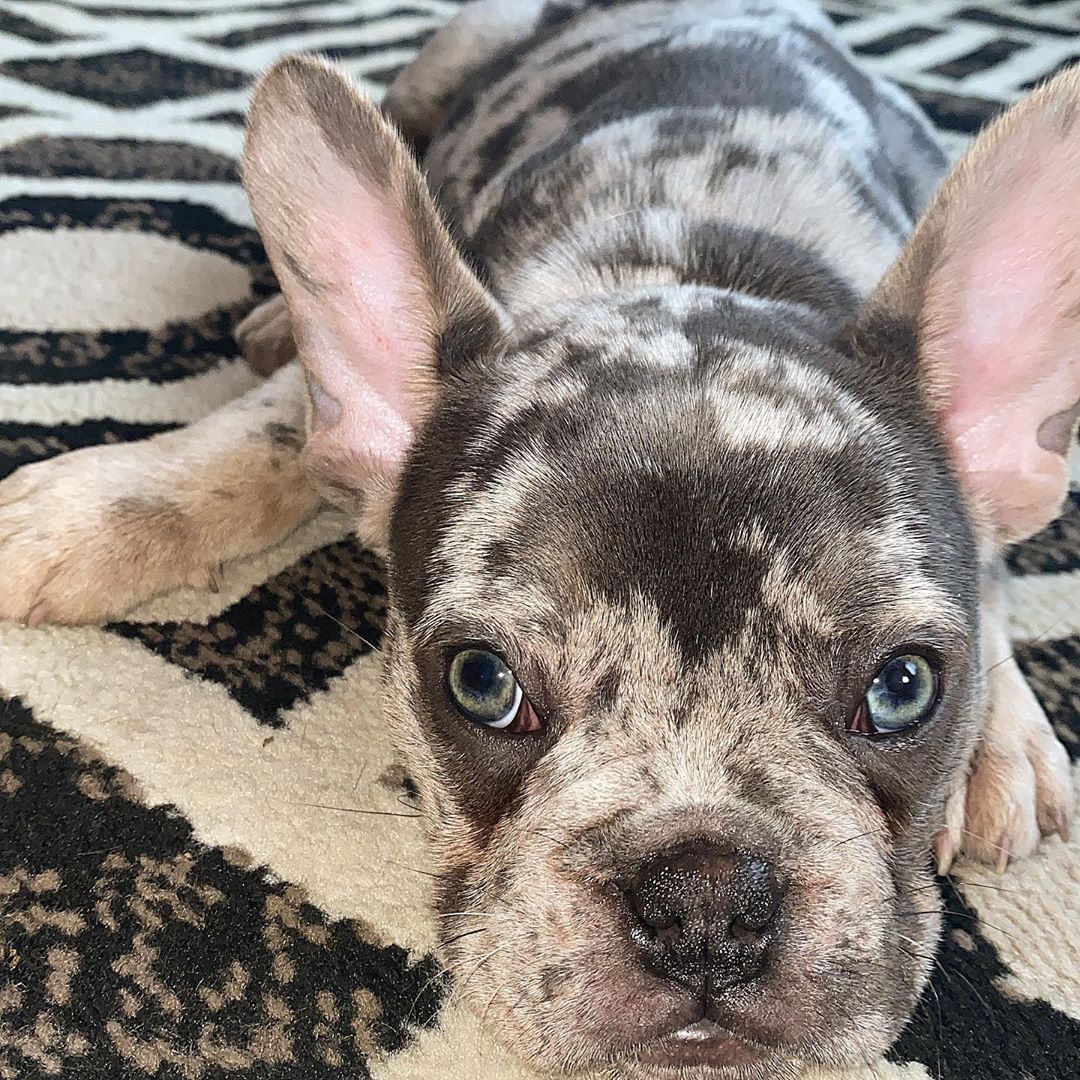 Because this type of French bulldog is not natural, its cost is significantly higher. These canines can be priced anywhere from $6,000-$8,000 unlike a regular French bulldog that costs around $1,500-$3,000.

Besides the purchase price, merle French bulldogs are expensive to care for. They have a voracious appetite and, because of their genetic composition, tend to need to visit the vet often.

6. These dogs are somewhat rare, so it can be difficult to find one

To locate a breeder, you can usually do a quick online search. However, this doesn’t always indicate that the breeders are reputable. To ensure you’re buying from an ethical breeder, you should always make sure to ask for the dog’s DNA test and have a quick vet examination done.

This is because to create a merle French bulldog, sometimes different dog breeds are needed. To be considered a purebred, the dog must have parents of the same breed.

Are Merle French Bulldogs Recognized by the AKC? Can They Be AKC Registered?

Most merle French bulldogs can be registered by the AKC, but they aren’t considered a standard breed color. Despite this, the AKC still recognizes them.
To register a merle French bulldog with the AKC, you’ll first need to obtain an AKC registration form. After doing so, take pictures of your pet. The photos should show your dog from the front and the side. Then, write the AKC registration number (found on the form) and your dog’s name on the back of the photos. Once you do this, fill out the rest of the registration form and then mail it to the address printed on the top.

One of the most common problems is genetic deformities. Because this dog has a unique genetic condition, it could result in stunted limbs, blindness, or deafness. Numerous merle French bulldogs also suffer from allergies, immune disorders, heart murmurs, and hip dysplasia.

You’ll also need to keep in mind that because they have such light-colored eyes, they could have some eye abnormalities. Some of the common problems being one eye is bigger than the other, one eye is covered by a nictitating membrane, cataracts, and coloboma.

9. There is a wide debate over whether it’s ethical to buy a merle French bulldog

Many say that it’s important to purchase a merle French bulldog, otherwise, these sweet creatures would end up in animal shelters. Those who are against it claim that it only makes it easier for disreputable breeders to stay in business. They also state that because this type of French bulldog tends to have significant health problems they live in agony.

If you want to purchase a merle French bulldog, you’ll need to be prepared for possible health issues. It’s also vital to ensure that the dog is from an ethical breeder. This will make sure that the dogs receive proper nutrition, care, and socialization. An ethical breeder will usually be happy to answer any questions you have about their dogs.

Merle French bulldogs are beautiful animals known for their distinctive coat pattern. While very patient and affectionate dogs, they do have some serious health concerns due to their genetic condition.