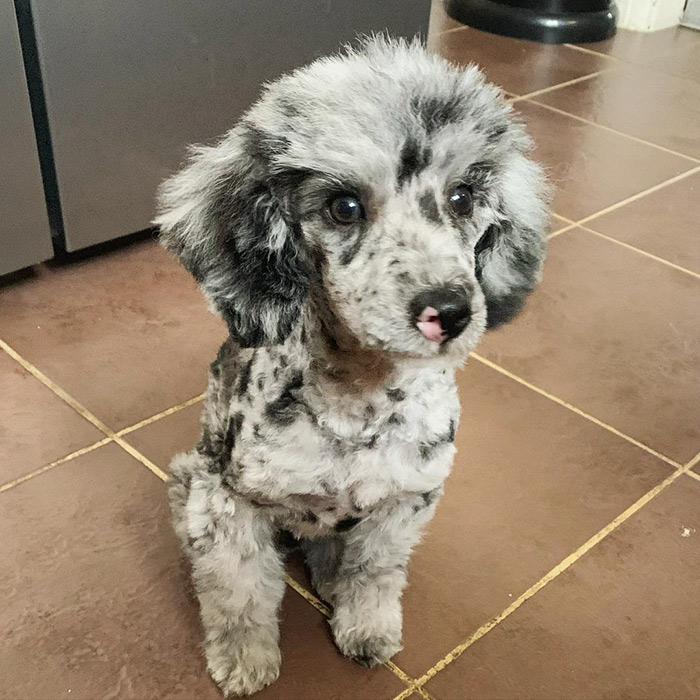 Multi-colored, speckled and spotty Australian shepherds are well known for their kaleidoscope coats. They are not the only dog breed capable of displaying such furry finery, however. Known to be prim and polished, the posh poodle is also capable of coming in a variety of coat colors. Beyond the accepted tans, browns, blues, and cream coats, merle poodles have been known to exist. Merle is more than just a coat color, though.

Merle tends to express itself in patches, dots, spots, and dashes. Usually there’s a base color (black is common on poodles, though with light gray spots it looks like a blue palette), over which an array of darker colors are patterned. This is different from parti-poodles who usually have a white base paired with one shade of either only black, red, or brown. The (dis)coloration isn’t strictly reserved to the dog’s fur. It can also affect the color of the poodle’s eyes – light blue is a tell-tale sign of a merle dog. The coloring also effects the skin of the poodle’s eyes, nose, and paws. Usually known to have black skin, the dog could end up with a mottled black and pink discoloration.

2. Despite it usually being a loud color pattern, merle isn’t always obvious. Phantom merles exist and they’re as ghostly as they sound.

Also called cryptic merles, they don’t show any of the obvious merle traits at all. They look like a run-of-the-mill (though still beautiful!) poodle – no spots or dots or unusual colors. What makes them merle is their genetics. Phantom merles still carry the merle gene in them, it’s just not physically visible. Phantom merles are important to look out for when it comes to breeding.

3. While some breeds have spontaneously developed the merle gene, merle poodles are not natural.

This means that the gene has been introduced into the poodle pool by another breed of dog, making merle poodles not purebred even if they look and act like it. Some people believe their dog is purebred poodle after DNA testing that seems to support this claim, but it is guaranteed that if they traced their dog’s heritage back they would eventually find a (great-)grandparent of another breed who introduced the merle gene to the family. In order to get a merle poodle puppy, you must have a merle parent to breed with a regular poodle. It will never occur naturally.

4. While there are several breeds which are known and accepted as merle (such as the Australian shepherd and corgi), merles are not accepted by the AKC in the poodle category.

This is especially because it is not a naturally occurring trait in poodles, whereas it is in the other breeds. The AKC sees merle poodles as a corruption of the purebred and any merle poodles presented will be automatically disqualified. 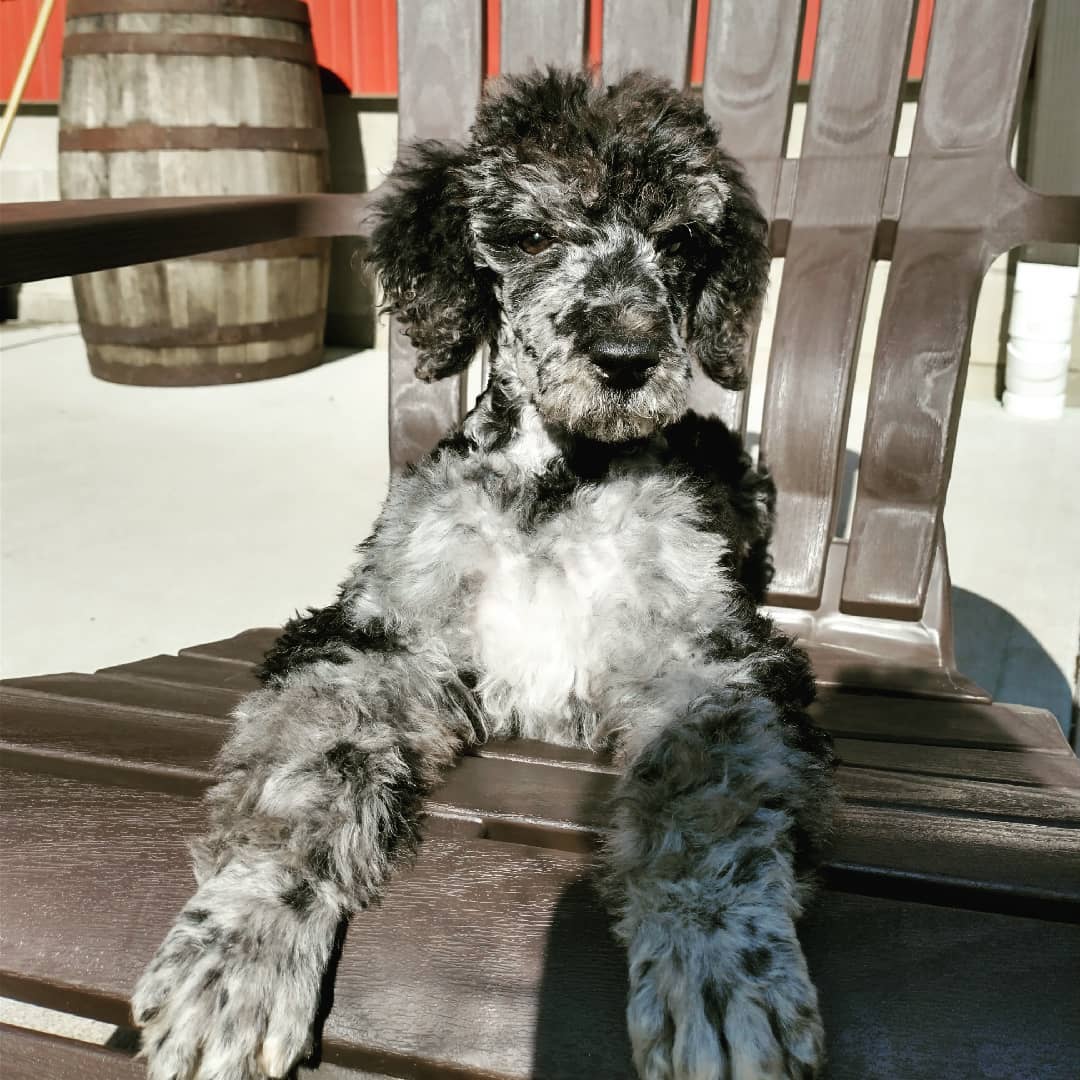 5. Dogs who aren’t merle in any capacity would show mm in a genetic test. Dogs carrying the merle gene would show as Mm.

Then there are double merles, who show as MM. A double merle dog is a poodle who got double the dose of genetic mutation, meaning that both of its parents carried the merle gene. They are more than likely to have the tell-tale coat markings of a merle dog – or sometimes come out as completely white, but never phantom – along with several unsavory side effects. It is common for double merles to have birth defects: malformed ears or eyes, even missing ears or eyes is possible. Less extreme but still severe for any dog, double merles could be born blind or deaf.

6. Breeding merle poodles is risky especially if a phantom merle has not been discovered for what it is.

Breeding two confirmed merle dogs together is almost guaranteed to produce a double merle. It’s all about statistics. The parents can be MM and MM or they can be MM and Mm. As you can see, the odds of the offspring being MM are very high and the effects of a double merle disastrous.

7. Breeding merle dogs of any breed is a tricky business. It needs to be carefully regulated due to some serious side effects.

While not all mutations are bad, the merle one can be. The coat discoloration that’s admired in merles isn’t the issue, it’s the potentially harmful side effects that come along with it. While breeding to purposefully obtain a merle poodle isn’t an atrocious thing, it can be done irresponsibly.

Basically, breeders need to have their poodles genetically tested if they suspect that a dog carries the merle gene. Remember, it can be hidden like in phantom merles. If the dog carries a merle gene, it should not be bred with another merle (visible or phantom). On its own, if a merle is matched with a dog who has been proven to have no merle gene whatsoever (not even phantom!), the two can be bred.

Because merle is a rather dominant gene, it is more than likely that the litter will have several merle puppies. As we mentioned, doubling the gene can cause double the problems. That’s why it’s so important to test for phantom merles. Without genetic testing, blind breeding should not be done. That’s where the problems start.

8. Poodles as a pure breed are at risk from several health problems.

Most of which can be treated or avoided with proper breeding and owner care. Hip displaysia is common in many breeds and can affect a poodle’s gait. Other orthopedic problems can occur more in toy and miniature poodles. They can also suffer from epilepsy and hair regrow issues like sebaceous adenitis. As long as breeders are responsible, poodles should lead long, healthy lives. 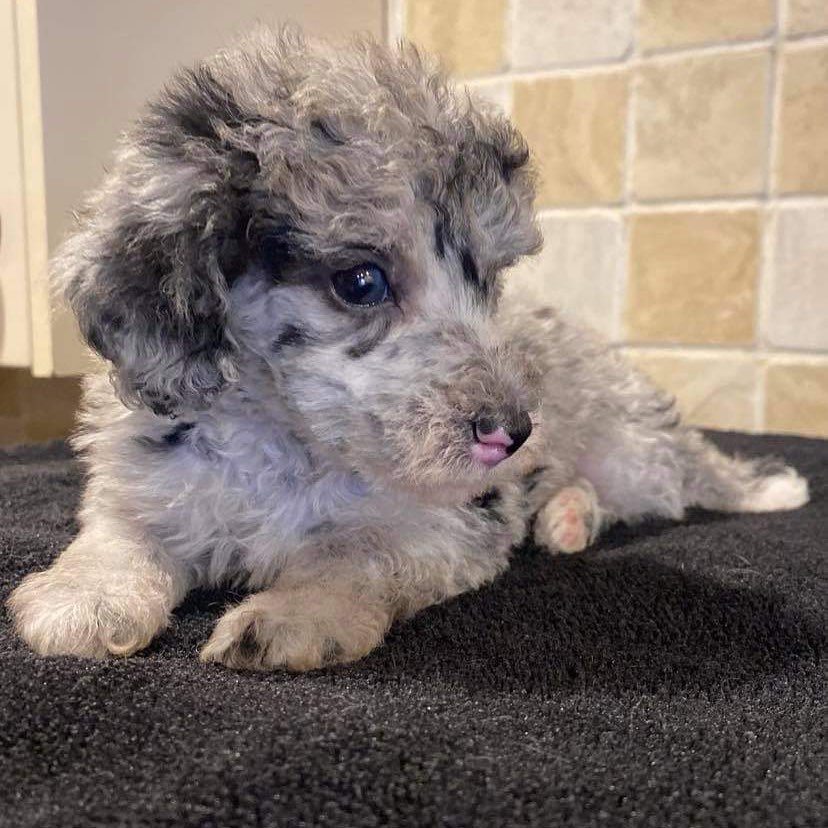 9. Merle dogs of any breed are almost guaranteed to face health problems.

It’s the genetic structure of the mutation that puts these bespeckled dogs at risk. Across all breeds, merles face auditory and ophthalmologic problems – both visual and internal. They can also have problems with their cardiac, skeletal, and reproductive systems. Double merles are almost guaranteed to face these issues in their lives, if they’re not already born with them. Many of these diseases are not ones that can be treated easily. That’s why concern surrounds merle poodles.

Some breeds very rarely carry and display merle genes, some breeds almost never do. The merle poodle is rare because it is not naturally occurring. Plus, “purebred” dogs that are not AKC recognized tend to be less profitable. Interestingly, the merle poodle kind of breaks this mold.

A regular poodle (be it standard, toy, or miniature) will cost you between $1,500 and $2,000. A rather average price for a purebred dog. Merle poodles, however, can put you out a whopping $5,000. This is pretty standard for type of poodle (standard, toy, or miniature) and age range (puppy or adult). One breeder in Ohio has a blue merle poodle puppy listed for $15,000! Surely that’s got to be a typo.

11. The breeding and ownership of a merle poodles is much more contested than with other breeds.

For other merle dogs, where the mutation is naturally occurring, it can be argued that as long as the breeding is done responsibly under close scrutiny of the parents’ genetics, let there be puppies! The poodle poses a greater problem, though, as many are vocally against the introduction of this non-naturally occurring mutation in these plush pups. It’s not just a concern for maintaining their purebred status, but a humane concern for the wellbeing of the poodle.

While merle dogs can look adorable, the mutation doesn’t suit every breed the same. Poodles are known for their smooth-colored coats. It seems like adding merle into the gene pool is a waste. It’s not wrong to want to own a pretty puppy, but everyone should want a healthy dog. If an addition to the family is on the horizon, think merle for other breeds and try to keep poodles pure.