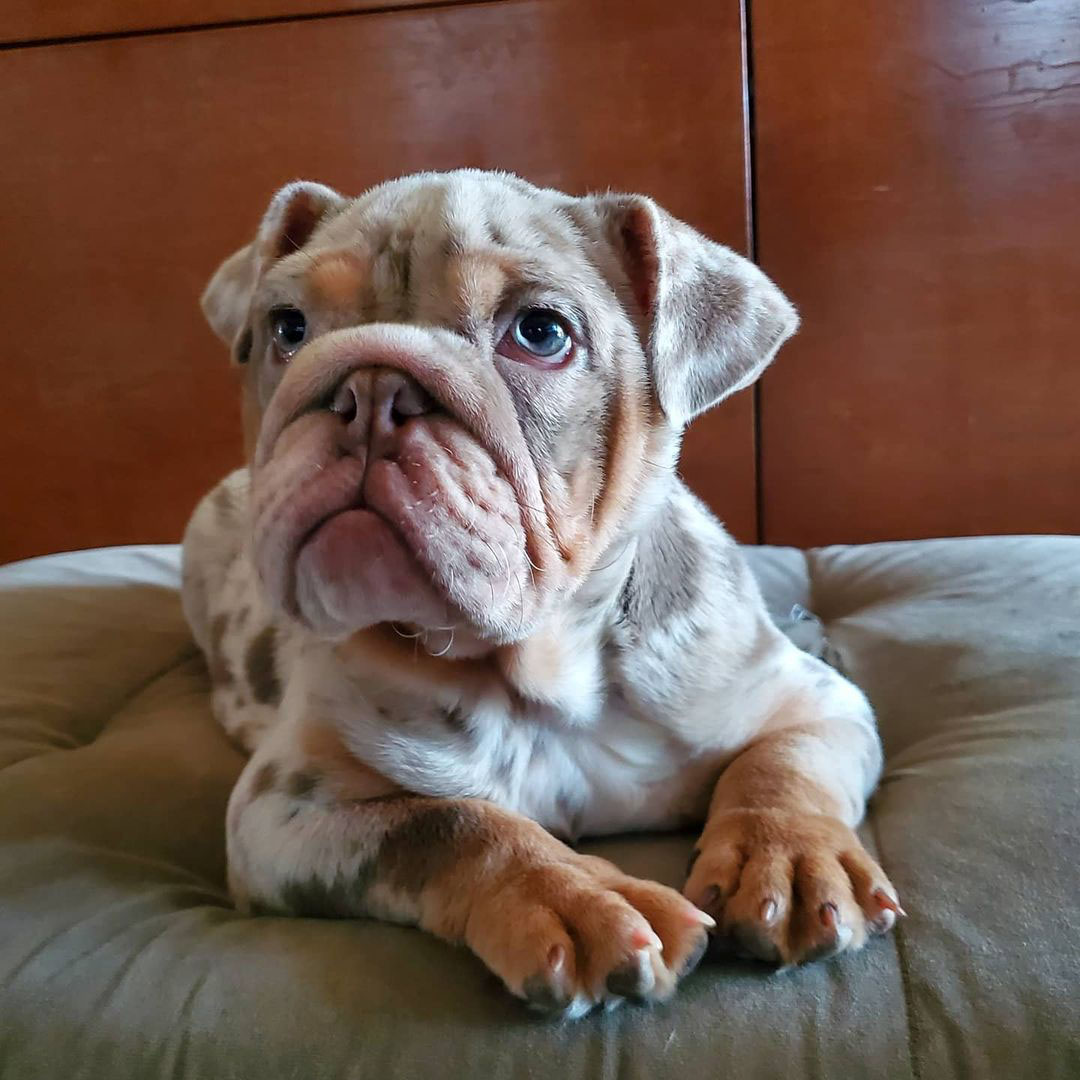 They’re genetically identical and can be born into litters full of non-merle bulldogs, which we’ll refer to as “classic bulldogs.” They are not a different breed and they exist as a small subcategory of coloring. Their behavior, temperament, and exercise needs are all the same as classic bulldogs.

Merle English bulldogs look like a Jackson Pollock painting. Okay, maybe not that colorful. They do have a very distinct, speckled coat that features various colors (usually more than three) in an uneven pattern, like sprinkled Dalmatians or cookies and cream icecream. Adorable and unusual, especially given a classic bulldog’s relatively simple coat.

Merle can present itself in a variety of colors. On bulldogs it’s usually a white base with gray and darker gray markings called “blue merle” … even though it’s gray. Sometimes there can be patches of tan, even black.

2. Merle effects the pigmentation of the skin and eyes as well.

Merle dogs will almost always have blue eyes, but can also have the David Bowie look and have one of each color. The skin on their nose pads are light pink or mottled black and pink, while classic bulldogs always have plain black.

Unfortunately, this pretty pattern is not recognized by the AKC. The bulldog has one of the oldest Standards; it hasn’t been changed once since 1890!

That seems to be why judges are averse to accepting alternate coat colors. On their Breed Standard for the bulldog, the AKC distinctly notes that “[t]he merle pattern is a disqualification.” It seems a bit unfair, since there are some breeds for which they accept merles.

Merle is a genetic mutation that effects the pigmentation of a dog’s skin, fur, and eyes. It’s a purely physical mutation, so that while it may come with its own specific health defects, it doesn’t make a merle bulldog any different from a classic one mentally.

The best way to know if a bulldog carries the gene is by genetic testing. A vet takes some samples that are sent off to a lab that analyzes a dog’s genetic makeup. Knowing if a dog carries the merle gene is important to breeders.

4. There are different types of merle. Original, basic, by-the-book merle is as we mentioned: an unevenly freckled coat in three or more colors.

A double merle is a dog whose parents both carried the merle gene and inherited a double dose. Double merles are dangerous as they have a greater concentration of the merle gene and are thus are even more likely – in not guaranteed – to suffer from poor health. MM and MM should never be mated together.

Neither should MM and Mm or even Mm and Mm, as all these combinations of the merle gene will produce an ill-fated double merle.\

Double merles can come as a surprise as one parent could be a cryptic merle (mm or mCR). Mated with a visibly merle bulldog (Mm or MM), the odds of their offspring being double merle are pretty high.

The risk comes with mating two classic-looking English bulldogs. If neither show any signs of merle, surely there won’t be any genetic defaults, right? Wrong. The two can carry the merle gene without showing it and pass it on. Because merle is a recessive gene, it’s not likely to show in two non-merles’ (mm) offspring.

Even if their litter doesn’t produce merle puppies, the gene is still passed down and the next litter might. This is why it’s important to know a dog’s genetics before breeding. 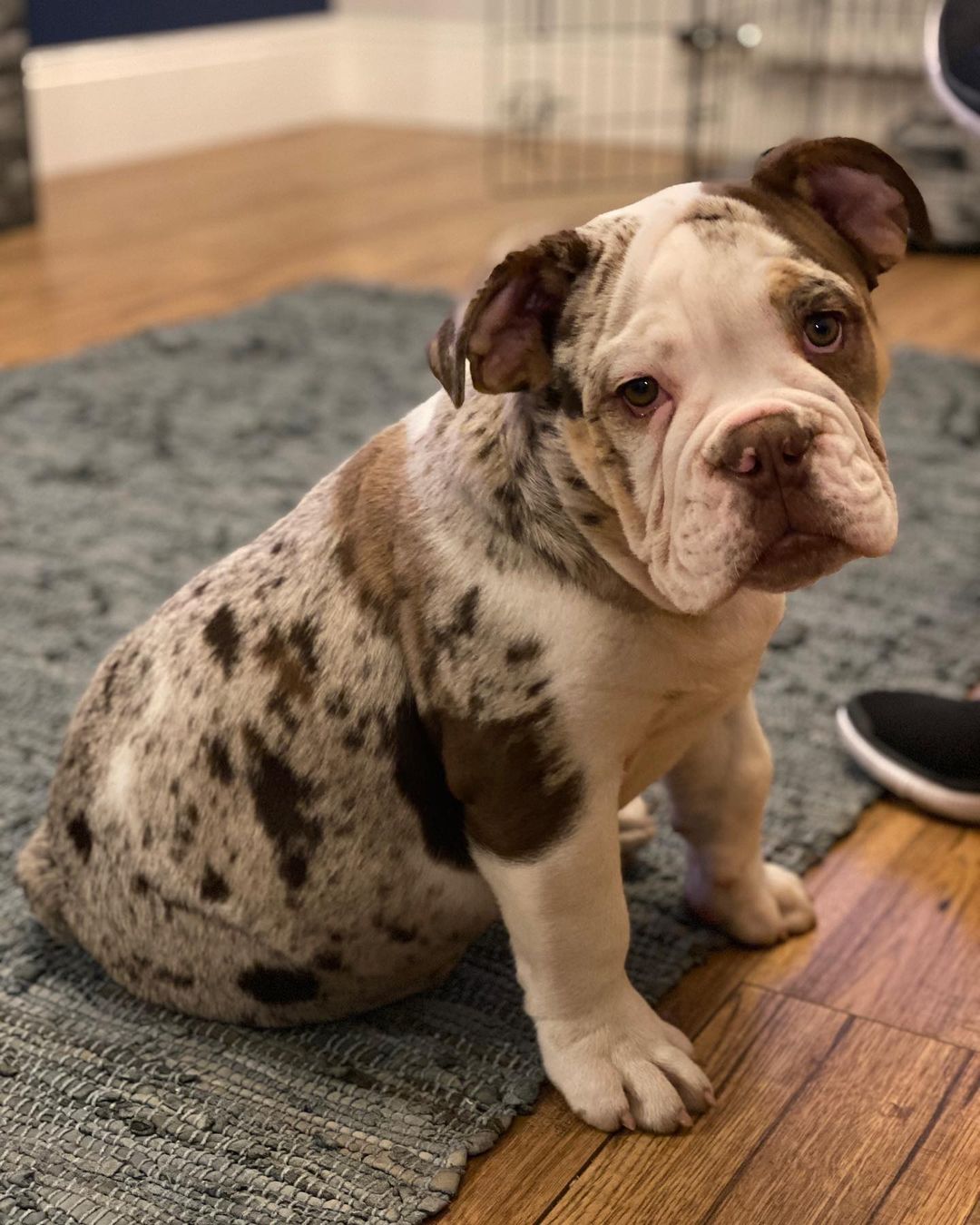 While there are many dog breeds that are known to carry the gene, each one doesn’t have many merle specimens. One reason for this is because merle is a recessive gene, meaning the odds are stacked against its spreading. Another reason is because of the detrimental side effects that come along with a cool coat.

This mutation isn’t lethal but it can cause severe problems. Merle bulldogs are subject to all the usual health issues any classic bulldog can face – and then some.

7. Merle dogs of all breeds are highly likely to have eye and ear deformities.

Some exhibit deformed pupils, in which the pupil appears in an irregular, starburst shape. Conditions such as microphthalmia (born with one too-small eye) and even anophthalmia (born with no eye) are also possible. Devastatingly, complete blindness and deafness are common, even expected in double merles.

Inconclusive studies have hinted at complications in the cardiac, skeletal, and reproductive systems of merle dogs. Because the gene is so rare, though, there’s not much data to support these claims yet.

As previously stated, double merles are much more prone to these problems. It is unlikely that a double merle will suffer no extra ailments in its lifetime.

8. There are definite breeding concerns with merle English bulldogs.

Prudent breeders will have their dogs genetically tested, especially if they suspect one may be a ghost merle. Sometimes the gene hides away for generations. Because of this, breeding should always be done carefully.

Confirmed merle bulldogs (even just Mm) probably shouldn’t be bred. If they are, leave it to the professionals who have had their dogs genetically tested and know for sure that the merle’s mate does not carry the gene. Double merles should never be bred. The safest bet is to have any merle bulldogs (Mm or MM) spayed and neutered. 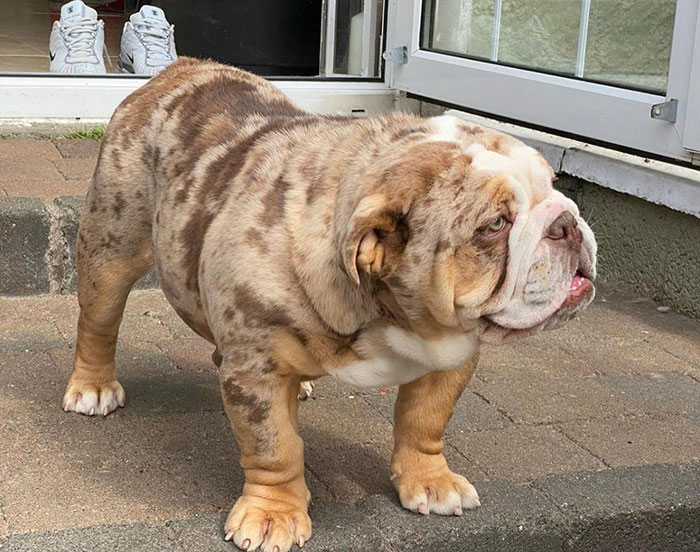 9. Anyone who breeds bulldogs with the intention of producing merle puppies should be very vigilant of their parent dogs’ genetics.

We’re not saying that breeding for merles is completely reckless. For one, as long as the breeder knows their dogs’ genetics, they can conscientiously cultivate litters that could potentially produce a rare merle puppy. For another, sometimes an innocent lack of information or ignorance means that merle dogs are going to happen.

It could be argued that any breeder who disregards their bulldogs’ genetics and purposefully breeds two known merles together is behaving very irresponsibly, if not inhumanely. They would be putting the future litter at risk. If they then sold those puppies, the future owner would be burdened with the sad responsibility of a bulldog doomed to poor health. Unfair on the owner, but more especially on the dog.

Preference for dog breeds come and go and there’s nothing wrong with that. When fads take over common sense, however, we need to start questioning how breeders take advantage of man’s best friend. Many people will want a merle bulldog for its unique coat and that’s not a crime. The best way to make sure they’re bred sensibly is by doing research into breeders, specifically ones supported by established organizations like the AKC.